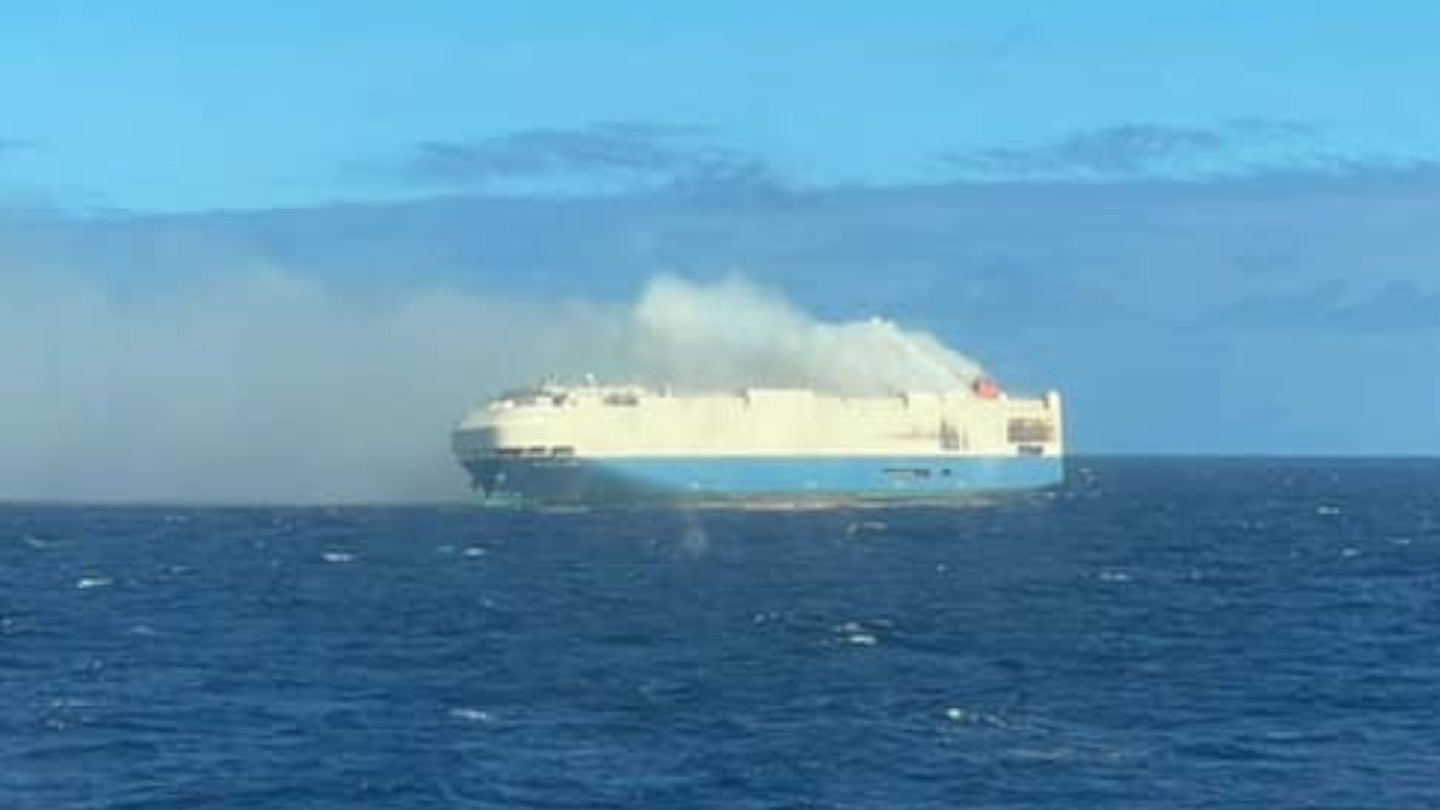 The Portugese Navy has confirmed this morning that one of its patrol boats came to the aid of the Felicity Ace, a car carrier transiting the Atlantic Ocean that's currently on fire and adrift off the coast of the Azores, as reported by the Washington Post. The vessel transmitted a distress signal after the fire broke out in one of the cargo decks, with the ship announced as "not under command" shortly afterwards. Thankfully, the 22 crew on board have been reported as successfully evacuated from the ship.

The Felicity Ace had departed from the port in Emden, Germany on February 10, and The Drive has confirmed it was carrying vehicles from a number Volkswagen Auto Group brands, including Porsche and VW. The ship was originally expected to arrive at Davisville, Rhode Island on the morning of February 23.

UPDATE 2/17/2021 @ 1:30pm ET: With the fire still burning and salvage plans being hatched, The Drive can now also confirm that the ship is also carrying 189 Bentleys and an unspecified number of Audis, with VW Group estimating the total number of vehicles on board to be close to 4,000. The Felicity Ace is regularly used as a charter vessel for VW Group, and also carried at least 21 Lamborghinis on its most recent voyage from Europe to America in January. We've reached out to Lamborghini for confirmation on whether it has any vehicles aboard today. The rest of our original story continues below.

After transmitting the distress signal on Wednesday morning, the Panama-flagged ship was quickly reached by the Portugese Navy patrol boat as well as four merchant ships in the area. According to Naftika Chronika, the crew of the Felicity Ace left the ship on a lifeboat and were picked up by Resilient Warrior, a tanker operated by Greek company Polembros Shipping Limited. Reportedly, 11 of the crew have so far have been picked up from the Resilient Warrior by a Portugese Navy helicopter. Efforts to bring the situation under control are ongoing according to reports from the scene.

The Felicity Ace was built in 2005, measuring 656 feet long and 104 feet wide, with a carrying capacity of 17,738 tons. Fully loaded, the ship could carry nearly 4,000 vehicles. No details are currently available as to the cause of the fire, other than that it broke out in the ship's cargo hold. The ship can be seen smoking in the distance in photos taken from the Resilient Warrior, as shared by Naftika Chronika.

Porsche and Volkswagen vehicles, among others, were on board the carrier at the time of the incident, headed for North America. Members on 718Forum.com have reported Porsche's Track Your Dream service delivering a message that the company is "aware of an incident on the Felicity Ace", which was "carrying certain Porsche vehicles." The message indicates that dealerships will provide customers with further information where available.

Similarly, members of the VWIDTalk and Rennlist Porsche forums have speculated that their vehicles may have been affected by the fire on the Felicity Ace. Based on previous import manifests filed in the USA, the ship has regularly transported cars for Volkswagen, along with its other brands, including Lamborghini, Audi, and Porsche.

Matt Farah, the man behind The Smoking Tire YouTube channel, posted today regarding his own Porsche that was apparently onboard the ship. "I ordered a Boxster Spyder in August, and I was very excited to get it at the end of this month, and now it seems like it might become an artificial reef," said Farah, adding that "I'm only saying this because I know no one was hurt, which is obviously more important." The car in question was a Boxster Spyder, which Farah planned to fit with an DeMan 4.5L flat-six engine after delivery, among other upgrades.

In a statement provided to The Drive, Porsche stated that "Our immediate thoughts are of the 22 crew of the merchant ship 'Felicity Ace,' all of whom we understand are safe and well as a result of their rescue by the Portuguese Navy following reports of a fire on board." The company advised concerned customers to liaise with their dealers, noting that "We believe a number of our cars are among the cargo on board the ship. No further details of the specific cars affected are available at this time – we are in close contact with the shipping company and will share more information in due course."

Some Porsche customers may be particularly concerned if their limited-edition cars have been damaged and destroyed in the incident. The company has in the past made efforts to remanufacture limited-edition cars, such as the Porsche 911 GT2 RS, when a number were lost when a cargo ship sank back in 2019.

Volkswagen, meanwhile, stated that "We are aware of an incident today involving a cargo ship transporting Volkswagen Group vehicles across the Atlantic," adding that "At this time, we are not aware of any injuries. We are working with local authorities and the shipping company to investigate the cause of the incident."

With the automotive industry already struggling with supply chain issues, this incident will come as a further blow. Similarly, when a ship's name is all over the news, it's rarely for a good reason, as we all learned when the Ever Given blocked the Suez Canal last year. However, the good thing to take away from this story is that nobody has been hurt, and the crew were rescued safely. Some cars may have been lost, which will cause much pain and frustration, but any cars damaged will hopefully be replaced in good time.