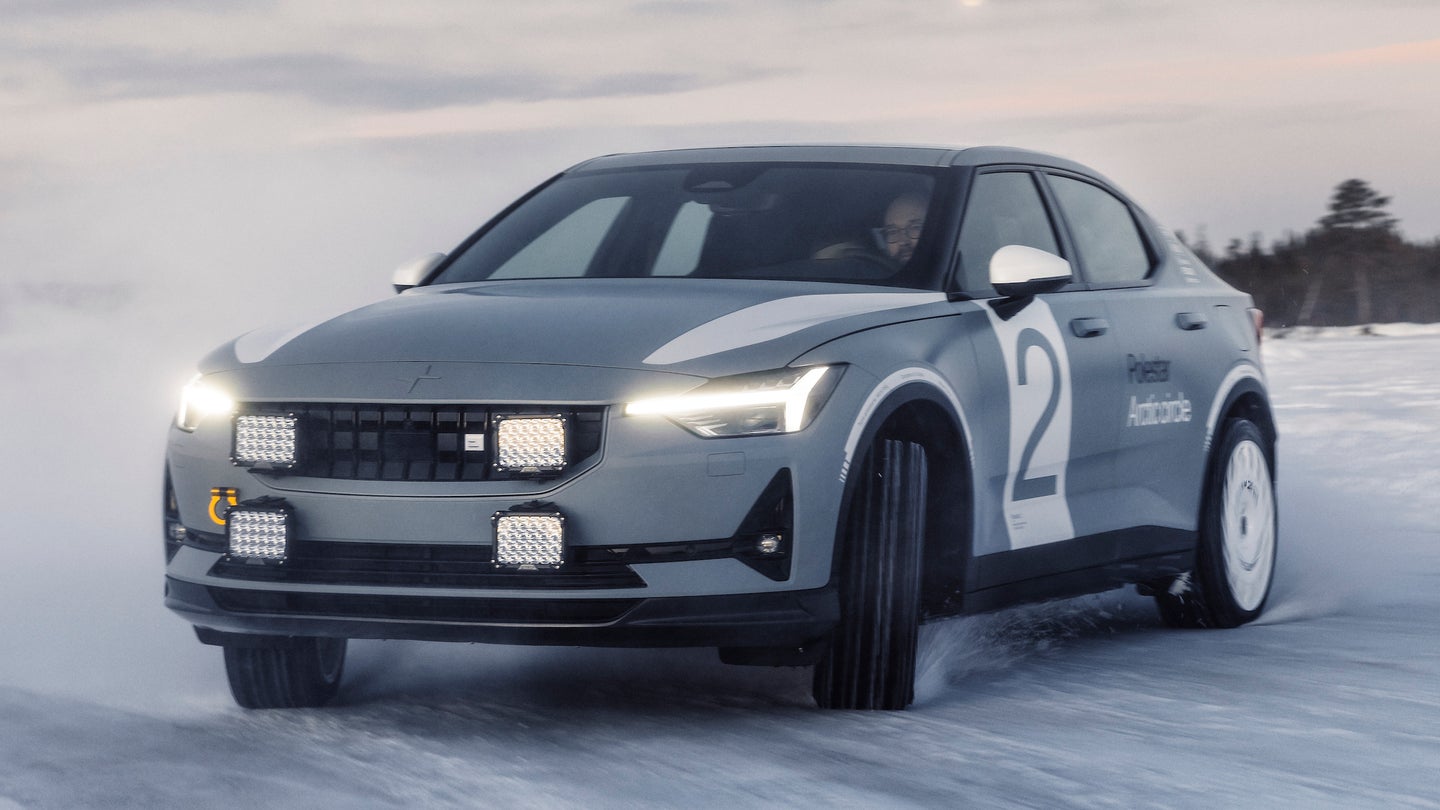 Anyone who thinks EVs can't do winter has clearly yet to meet the Polestar 2 Arctic Circle, a one-off special created by Polestar chief chassis engineer and rally driver Joakim Rydholm, designed and tuned to conquer the snowy frigid conditions of northern Sweden. It's based on a long-range, dual-motor, all-wheel-drive Polestar 2 with the optional Performance Pack, a $5,000 extra that includes Ohlins shocks and Brembo front brake calipers. Stock, the dual-motor Polestar sedan boasts an EPA range of 249 miles and hits 60 mph in 4.5 seconds.

To create this Arctic Circle version, however, the ride was raised by more than an inch while power and torque were bumped to 469 horsepower and 502 pound-feet, respectively (up from 408 hp and 487 lb-ft.). It wears custom studded winter tires on its 19-inch OZ Racing rally wheels, while the Ohlins dampers were specially tuned and made 30 percent softer (nine clicks front and rear, in case any Polestar 2 owners would like to mimic this). Polestar did not specify how the power bump, higher ride, and non-eco tires would affect this car's range, but it's safe to assume that it hasn't gotten better.

Anywho, new strut braces were installed front and rear while a new prototype launch control system was added and can be summoned with the paddles mounted on the steering wheel. For good measure, the Swedish EV maker has thrown in a carbon-fiber shovel and recovery strap in the trunk, as well as four Stedi Quad Pro LED lights and a carbon skid plate up front.

Polestar says the Arctic Circle 2 is and will remain a one-off show car not available for public consumption. Although how cool would it be if the company sold amped-up, winter-ready versions like this of every car it makes going forward? It'd certainly help it live up to its name as the stars of the North Pole. Get it?

Got a tip or question for the author about the Polestar 2? You can reach them here: chris.tsui@thedrive.com

Polestar 2 Gains 67 HP From OTA Update, and This Is How It’s Going to Be

Over-the-air updates are becoming the EV equivalent of ECU flashes and I’m here for it.

Our First Look at the Polestar 3 Electric SUV

The upcoming EV from Polestar will be built in South Carolina.