Future mods include a supercharger and other performance-enhancing upgrades. 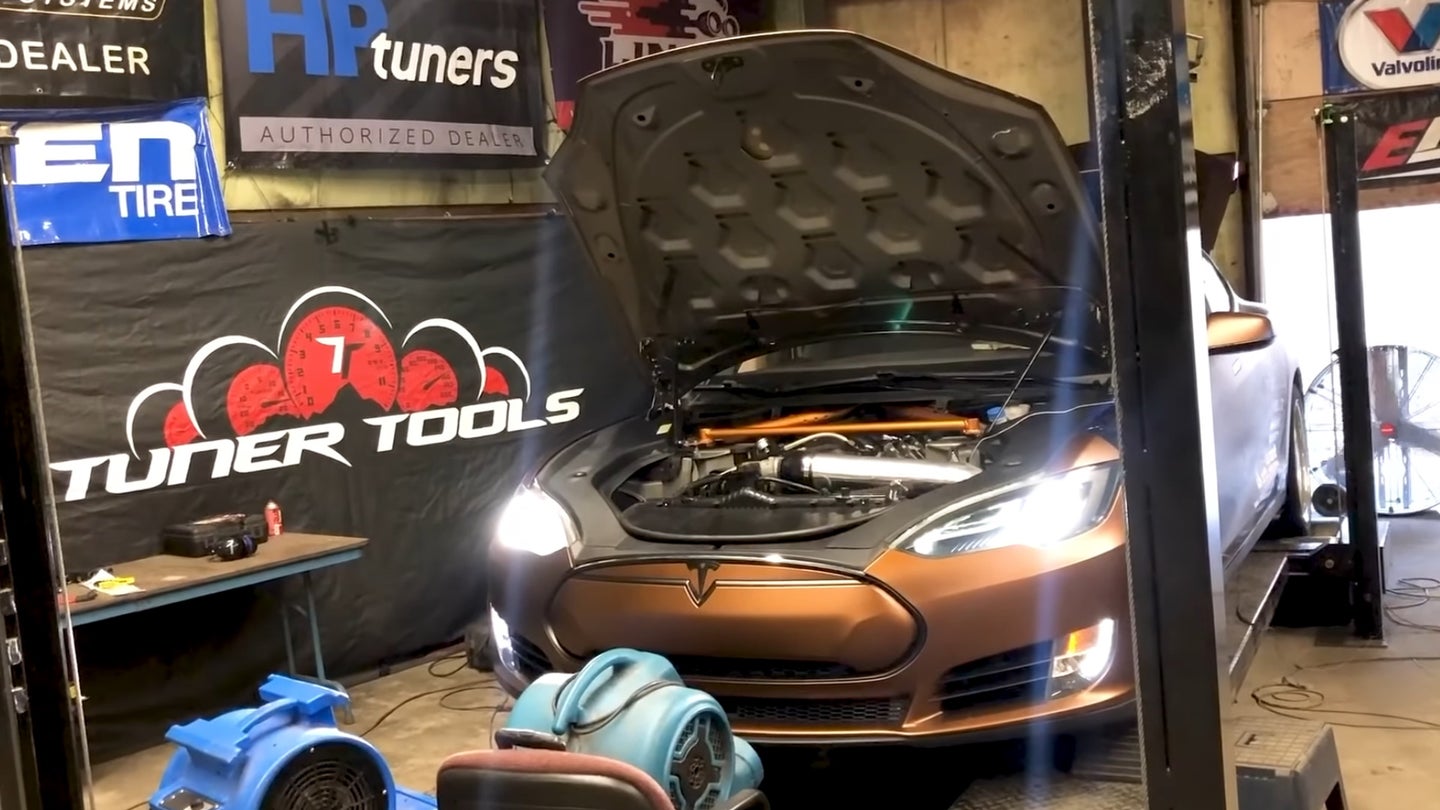 We've talked a lot about Rich Rebuild's V8-swapped Tesla Model S. Featuring a 6.2-liter LS3 V8 out of a Chevy Camaro, the project car took over a year to painstakingly assemble. However, despite the incredible engine swap and all of the people it's doubtlessly enraged, the car hadn't been strapped to a dyno and hadn't been weighed. Thankfully, that's changed today, and the numbers only add fuel to the fire of controversy.

As it turns out, a Tesla Model S P85D is a lot lighter without a battery pack and the associated electric drivetrain. In fact, the V8 swapped into the Tesla sends enough power to the rear tires to have a superior power to weight ratio. Sure, it likely won't take a P85D from a standing start, but a roll race? All of a sudden that's a big question mark.

Let's get the numbers out of the way. The car makes 444 horsepower at the wheels courtesy of the Chevy V8 and the custom exhaust attached to it—a figure fairly typical of a 6.2-liter LS with light mods. A bad spark plug and at least one plug wire had to be replaced before the car's full power was unlocked, however. As it turns out, some poor treatment at the junkyard was hampering the V8's performance.

As far as the car's curb weight goes, the change is drastic. Rich claims to have weighed the car with a driver at 3,700 pounds. Without a driver, as he explains, that puts it in the neighborhood of 3,500 lbs. A stock Model S P85D weighs 4,936 pounds, representing a difference of 1,436 pounds; nearly three-quarters of a ton lighter.

A little more math reveals how that factors into the car's power to weight ratio. Tesla says a stock P85D makes a total of 491 horsepower, but that's not on a dyno, and even that number has been disputed before. To the tires, as tested back in 2014 by DragTimes, a P85D will make 413 horsepower and a huge 864 pound-feet of torque. That means, from the factory, the Model S had a power to weight ratio of about 1:11.95. In other words, each horsepower has to haul about 12 pounds worth of car. In its current guise, that's dropped to just 7.88, which is a very significant change.

Now, let's not do too much bench racing here because there are a multitude of factors that could make a drag race between a stock Model S P85D and Rich's "ICE-T" go one way or the other. From a standing start, the stock car would probably still take it thanks to its monstrous off-the-line torque and all-wheel drive. If Rich installed some slicks and an automatic transmission tuned for drag racing, it might get closer, but at that point, it's a race-prepped drag car versus a stock Tesla.

In fact, that leans into the core of the issue. Yes, in a rolling-start race under ideal conditions the V8 car might take a victory despite having to shift. However, ICE-T is a bonafide project if there ever was one. Would a race be something I would watch? Absolutely. Would we learn anything? Probably not. It would simply be entertaining, that's all.

Rich says he plans to add a supercharger and other upgrades, which will turn the car from something you can't really drive every day into an even bigger handful. That being said, it's going to be sweet. And along with his plans to make a Cummins diesel-powered Model 3, the YouTuber is truly going to go where no Tesla owner has dared go before. Good luck.