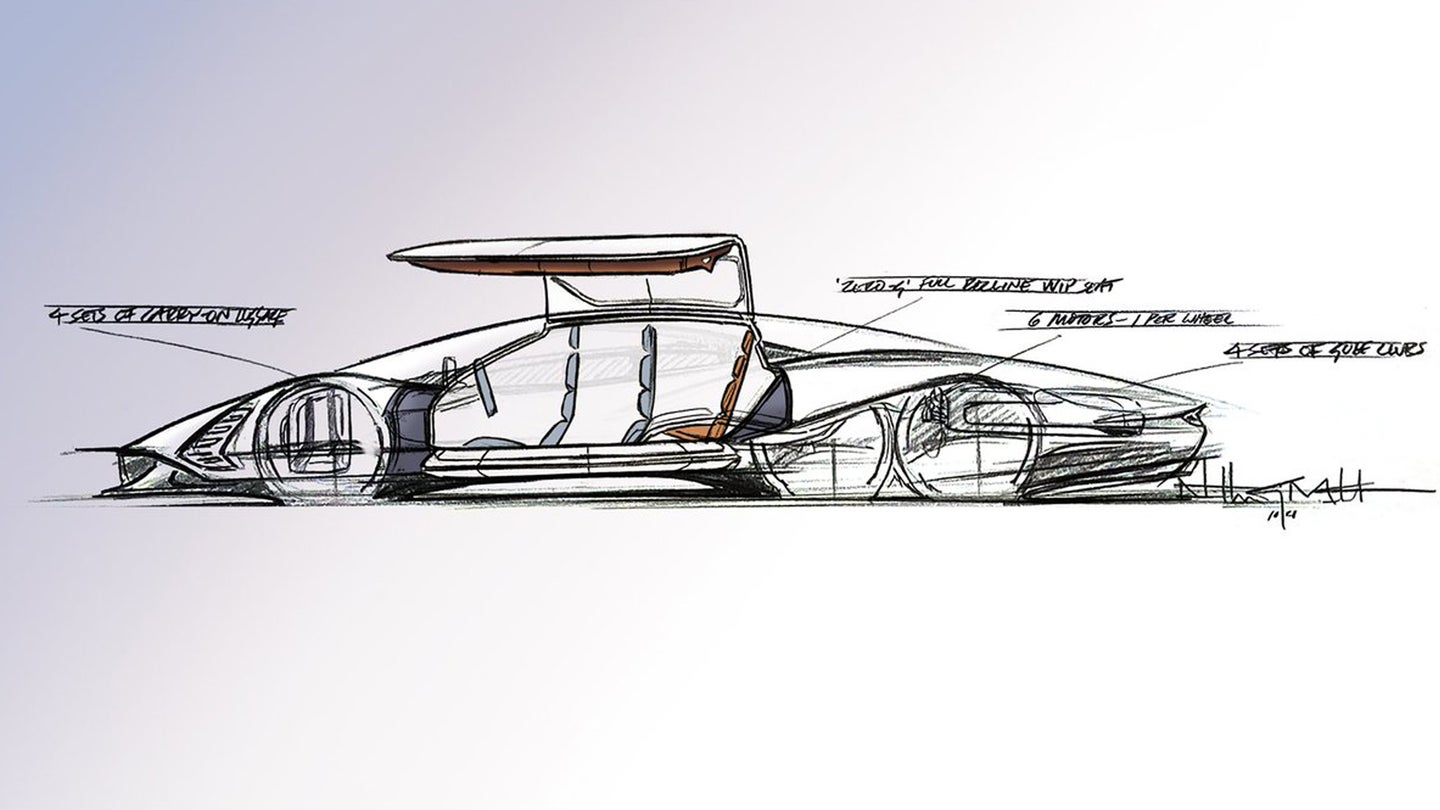 I know, just yesterday I was complaining that concept cars are boring now and today I'm going to tell you they're too silly. I'm just like that Meredith Brooks song: full of multitudes. Anyway, the thing we have to apply some healthy skepticism to today is Hennessey Performance's idea for a six-wheel electric supercar.

Called Project Deep Space because, I don't know—if you're a billionaire that's the sort of thing you're into these days—the "Hyper-GT" was teased on Hennessey's social media Tuesday with sketches that contain riveting little design details.

The seats are, as you can see above, arranged to avoid making conversation with your fellow passengers. The one at the rear, styled as a "VVIP seat," even reclines fully for reasons. It will be made with "ultra lux materials/tech," which is good because it will probably cost a ton if it ever gets built.

My favorite design notes, however, are on the side-view. They let you know this enormous, six-wheeled, six-motored limousine will have space in the frunk for four sets of carry-on luggage. Project Deep Space also boasts that four—yes, four—sets of golf clubs can fit in the trunk, making it roughly as useful as the most popular electric vehicle: a golf kart.

Thing is, being a creep about EVs is very much my thing. When I saw the Hennessey designs my mind went wandering about what it looked an awful lot like, down to the ugly-as-hell gullwing doors.

It's the KAZ Eliica, a car that was immensely lovingly designed and with huge ambitions by a team led by Hiroshi Shimizu at Japan's Keio University, way back in the early 2000s.

I don't know for absolute certain that Hennessey copied Keio University's homework because there are a few differences. First is the fact the Eliica actually exists and was built to push electric performance at a time when very few people were. It achieved speeds over 230 miles per hour and Shimizu dedicated 30 years of his life to making it happen. And ok, the seat layout in Hennessey's sketches are different and they're short a couple of wheels. But it certainly does make you think.

The Eliica didn't say how many golf clubs it could fit, though, so I guess that was a huge oversight.