Check Out The Cars of Transformers 7, from JDM Legends to V8 Muscle

These robots are in disguise—as some badass performance vehicles. 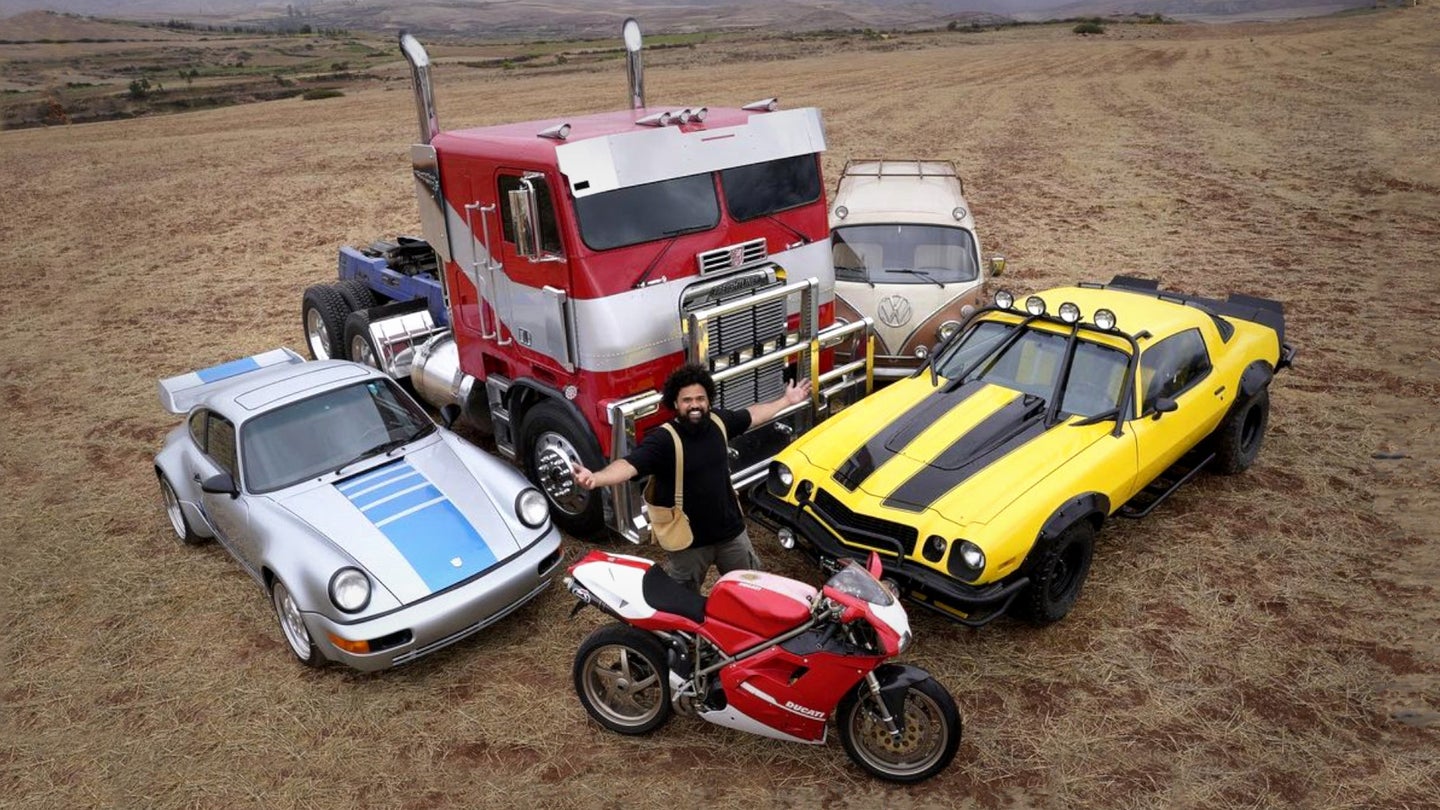 It would be difficult to call Michael Bay's Transformers a car movie, but it is certainly a movie with some excellent cars in it. The franchise has continued this trend, featuring advanced robots transforming into all manner of desirable machinery. We've just gotten our first look at the vehicles from Transformers: Rise of the Beasts, and there's plenty here for enthusiasts to drool over.

The photos come to us from director Steven Caple Jr., who shared the shots on Instagram this week. Additional behind the scenes shots came from Facebook page Transformers Cars, run by a self-described fan of the films who has worked to promote the series over the years. Taken on location in Peru, they show the cars in a somewhat grittier light as they work on set. The drop shows off some serious metal, so let's dive in.

Series hero Bumblebee will remain as a Chevrolet Camaro as is tradition, but has been treated to a second-gen makeover. Even better, it's with a badass off-road safari look. Fat chunky mud tires fill the flared guards, and there's a tough bash bar up front, too. The windscreen itself is fitted with what looks almost like a semi-external rollcage, topped with spotlights. Naturally, there's a sick little ducktail spoiler at the rear, too. Word from the set is that all the Camaros built for the film have GM Performance 350 small block V8s under the hood with "aftermarket mods."

Fellow Autobot and leader Optimus Prime also seems to be in attendance, in the form of a red, white and blue cabover truck. Details are scant, but so far, so good.

JDM fans will be delighted to see the character Nightbird represented with an R33 Nissan Skyline GT-R. It may not be the most popular Skyline of all time, but it looks truly mean in this configuration. Copper and purple highlights over grey are paired with a bodykit and big rear wing that just screams early 2000s tuner culture. Is it a genuine GT-R? Maybe not, but it certainly looks the part. The

The orange tow truck is a GMC Topkick, and is reportedly aligned with the villainous Terrorcons faction. As is the black Mack truck, serving as the alternate form of the character Scourge. Meanwhile, Autobot Arcee appears as a Ducati 916, with Mirage and Wheeljack filling out the heroes side as a silver Porsche 964 and a VW bus respectively.

The seventh entry in the modern film franchise, Transformers: Rise of the Beasts is set to be released on June 24, 2022. Set in 1994, it concerns another ancient robot conflict. This time, it's not just the Autobots on the scene, with the Maximals, Predacons, and Terrorcons all joining the fray. The film is a direct sequel to 2018's Bumblebee, and the events within occur several years prior to those of Michael Bay's original 2007 film.

We've seen great cars featured in the Transformers franchise before, and this film looks to be no exception. Long-term fans of the series will naturally have strong opinions on many of the car casting choices, and how they reflect the established personalities of the characters they represent. Feel free to continue the debate in the comments below, or sound off about which Nissan you would have rather seen on the silver screen. Who wouldn't have an opinion on that?