The multimillion-dollar piece of automotive history was gone by the morning, but we figured out how it ended up there. 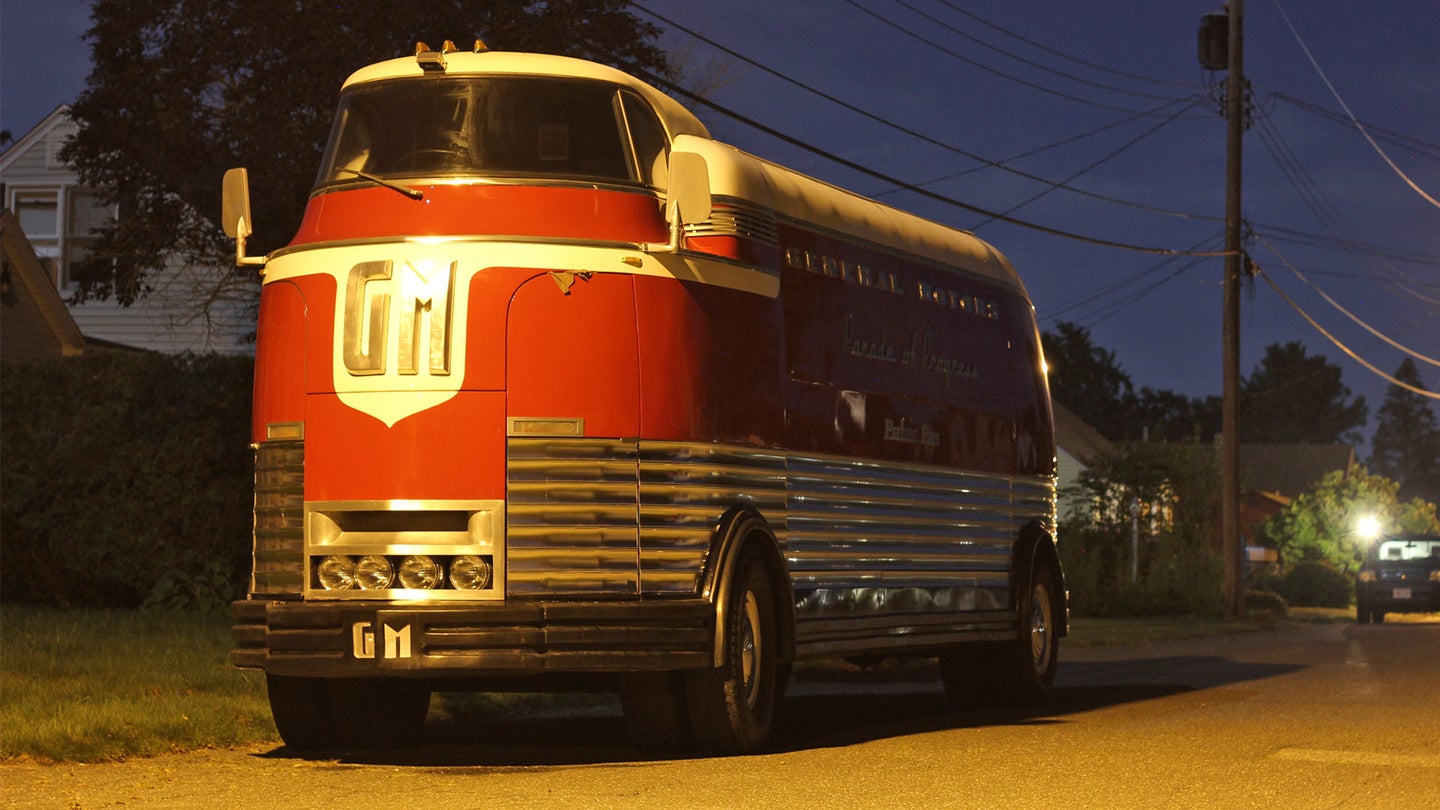 The story of the General Motors Futurliner is undoubtedly fascinating—not just for gearheads, but for anyone with a passing interest in history. Styled by none other than Harley Earl, these striking Art Deco streamline buses were built by GM in the late 1930s for its so-called "Parade of Progress," a kind of traveling auto/technology show that rolled from city to city to show off the company's industrial might and the future of manufacturing. Only a dozen were ever built; today, just nine are known to still exist, most of which are in museums or squirreled away in private collections. They're worth millions.

So what the hell was one doing street parked in a small Massachusetts town in the middle of the night earlier this week?

That was the question posed to us by a reader named Brian Deso, who spotted the Futurliner resting in the warm glow of a sodium-vapor street light in a residential neighborhood in Ludlow, Massachusetts on Monday. He sent us these evocative photos with the comment, "My understanding is these aren't common to spot in the wild"—perhaps the understatement of the century. In situ, the Futurliner looks otherworldly, a piece of alien technology descended from the sky. Its flawless condition also suggests a rift in time, like we're staring directly at a piece of the past that somehow, however briefly, blinked into view in September 2021. "It appeared late at night and was gone by early morning," Deso added.

It's impossible to avoid being consumed by questions when you see these pictures. Obviously, we have a thing for solving automotive mysteries. So we went at it and found exactly why a vanishingly rare, multimillion-dollar piece of automotive Americana ended up stashed—at least temporarily—in plain sight in a small New England town. 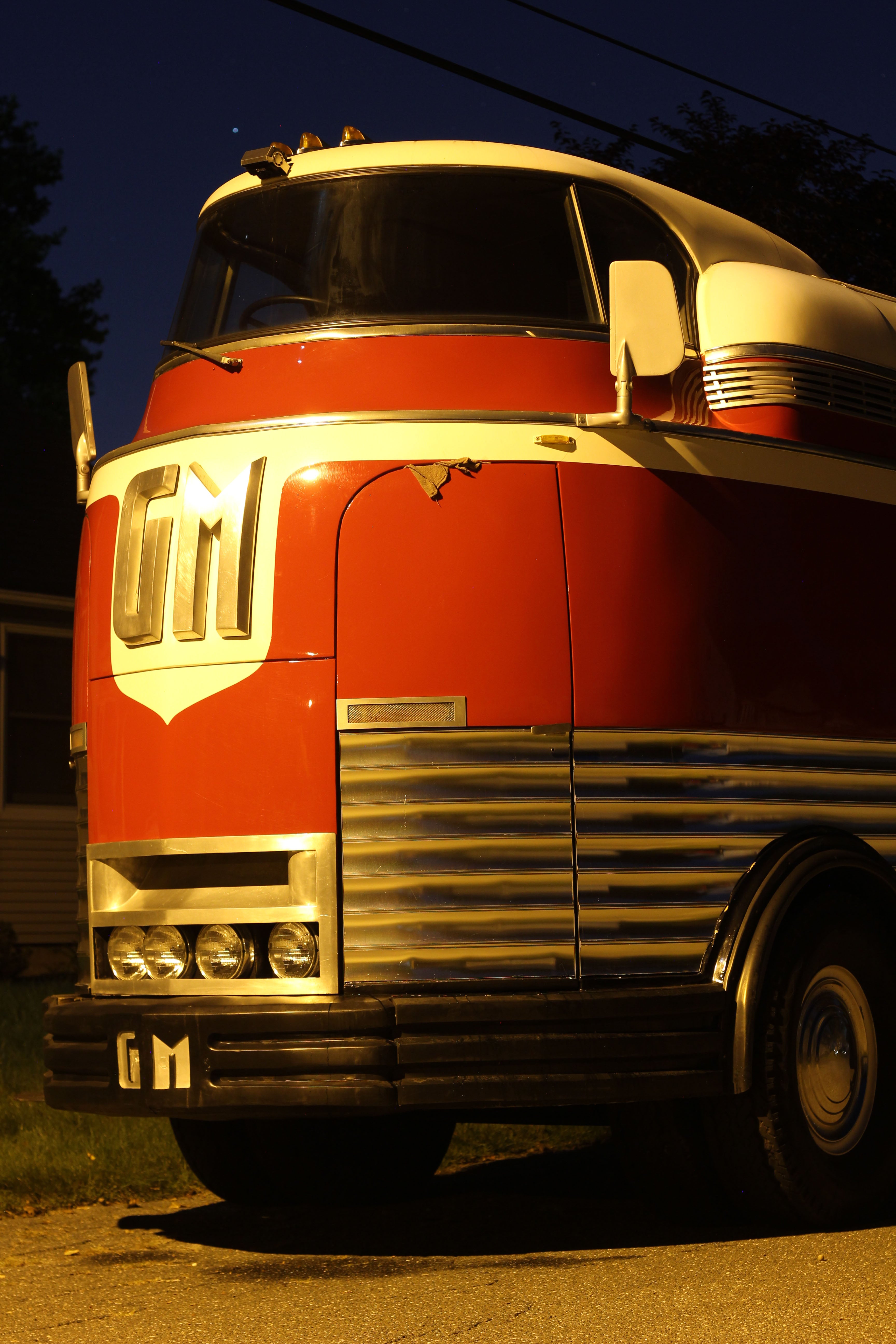 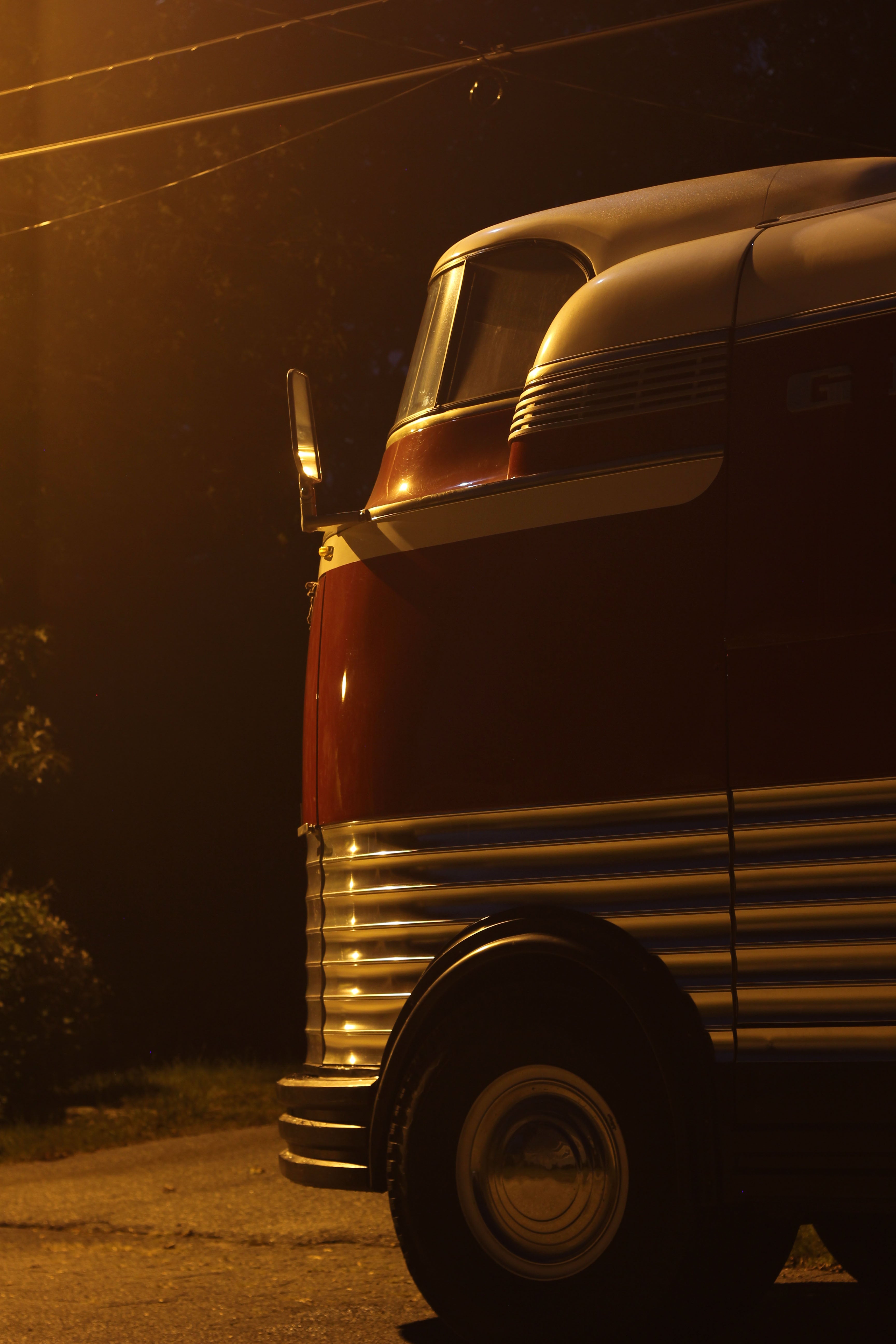 A little context is necessary to complete the picture. As I already mentioned, a dozen GM Futurliners were originally built to tour the country and show off new technology back in the 1930s, and after a pause for WWII and a vital postwar restyle, they crossed the nation again in the Parade of Progress to tell Americans about the exciting future of everything from refrigerators, to jet engines, to heavy industry and more. One whole side of the Futurliner opens up to show a diorama-type display, so outside of that they're fairly useless vehicles. But man, there is something magnetic about the industrial optimism the Futurliner exudes. And even today, its design holds up—undeniably from the past, but also timeless.

After the parade was ended in 1956, the Futurliners faded from view and one by one slipped away into private ownership—GM certainly didn't see the point of preserving them. And it's here where things get a little murky. Despite the fact that there were only 12 to begin with and 9 confirmed to still exist—and further, the Futurliners were all numbered one through 12—there is some confusion about which one is which in 2021. One was fully restored and previously sold for more than $4 million, but others rotted away for years before finally making their way into the hands of collectors in the U.S. and abroad.

Which brings us back to the mysterious Futurliner in Ludlow. Two of the buses, whose chassis numbers are disputed, were bought by none other than Peter Pan Bus Lines, a charter bus company based out of Springfield, Massachusetts. The eagle-eyed amongst you will have spotted that below "General Motors" and "Parade of Progress," "Peter Pan" is also affixed to the pictured Futurliner.

We gave Peter Pan a call, and it turns out the story of why this automotive treasure was street-parked overnight in a random neighborhood is pretty straightforward. "It was at a local country club for a golf tournament," John Cieplik, general manager at Peter Pan Coach Builders told us. "It must've [been] when I was driving it back."

Cieplik, who drives and maintains the truck, explained that the company rents it out for events as a promotional vehicle. It was his job to take it to a local golf tournament and bring it back to Springfield later on. In between the two, he parked it outside his home in nearby Ludlow, where the photos were taken.

Peter Pan actually owns two Futurliners, although only one is in presentable condition. The other is too far gone, rotting away behind the company's garage in Springfield. "I don't think it's rebuildable," Cieplik explained. "It's a carcass... [but] it's got some parts on it we can still use."

He explained that one of the truck's features, the overhead pod light that extends out of the roof, needs to be repaired, and the remains of the old Futurliner will offer up some parts to enable that fix. "That's gonna be a winter project," Cieplik said.

According to the February 2001 issue of National Bus Trader, the restored Futurliner was purchased out of a cornfield in upstate New York in 1997. It was in dire shape, so Peter Pan then restored it over the course of three years, originally finishing it in the company's quintessential green livery before returning it to its classic colors later on. When it's not being used, the bus is in storage at Peter Pan's Springfield facility, where it's been maintained ever since it last changed hands.

So why was a Futurliner just sitting out on the street in New England? Well, sometimes, there's a totally normal reason behind seeing an incredible piece of history in an everyday setting. We definitely shouldn't take it for granted and, if anything, we should be thankful that people are still taking these things out, driving and maintaining them.

Now, if only Ford's own midcentury behemoth could be spotted out and about again.