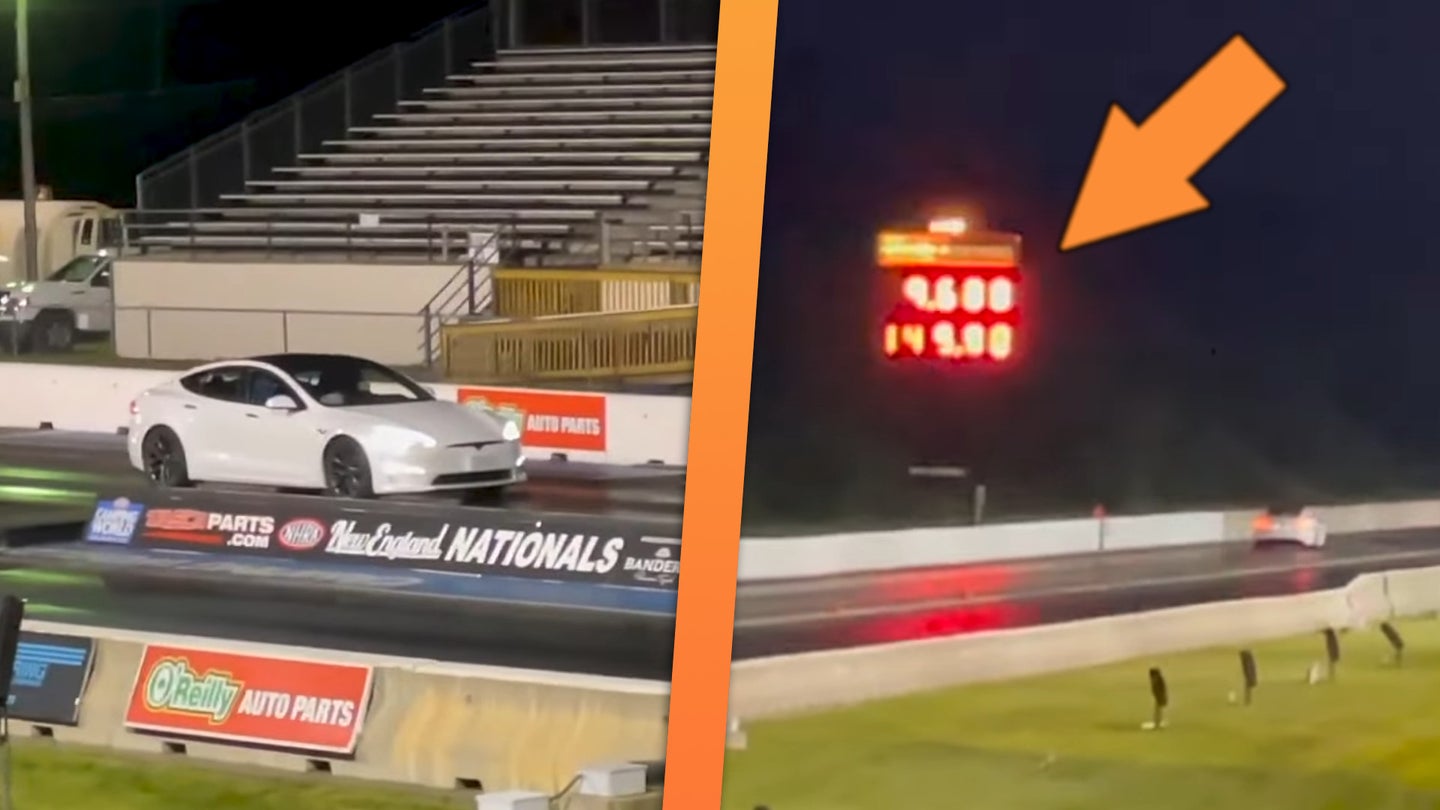 As street cars get ever faster, we've started to see a handful of models running afoul of the rules of the National Hot Rod Association, or NHRA. These mandate that vehicles competing in drag racing fit certain safety gear depending on quarter-mile times and trap speeds. The faster you go, the more safety measures are required. The latest to draw attention for this feat is the Tesla Model S Plaid, as shown in a recent video from Rich Rebuilds.

The Plaid is just the latest car to run into the problem of being "too fast" for the drag strip. Perhaps the most notable previous example is the Dodge Demon, which drew attention for being "illegal" for the drag strip in stock form. The controversy lies around the limits set by the NHRA. Cars that complete a quarter-mile pass in under 9.99 seconds or hit a trap speed of 135 mph are required to run with a rollcage, among other safety measures.

However, the way these rules are applied can be a little hazy in practice. Some test and tune events or private strip hires may ignore the rule completely. Alternatively, drivers may be allowed to race until they post a time faster than the limit. That is, just because the car is capable of a sub-9.99 second time on paper, the driver won't be kicked out until they complete such a pass.

In the case of Rich Rebuilds, that's precisely what happened at the end of the teardown video we covered earlier this week. After posting a 9.6 second quarter-mile pass at a 149.9 mph trap speed, the Model S Plaid was subsequently kicked out of the strip. Interestingly, at that trap speed, it's just shy of the 150 mph limit which requires a parachute under current NHRA rules. According to TV's Jay Leno, the Plaid can go even faster, so it bears consideration.

Some drivers take note of this, and intentionally drive below the limit in order to keep making passes. As reported by Teslarati in June, a driver at Sonoma Raceway made passes all day, braking or otherwise slowing down to avoid breaking the rules.

Of course, there's nothing stopping track officials simply banning cars like the Tesla Model S Plaid and Dodge Demon outright, based on their performance credentials. It's just not typically the way things are done. Of course, it could take just a few high profile incidents to bring about a change.

Incidentally, it's not the first time the drag racing world has faced such issues. Years ago, the limit was set much higher, with a 11.50 quarter mile being enough to require a rollcage in the vehicle. However, with cars like the Nissan GTR and Chevrolet Corvette ZR1 hitting these times off the factory floor, the NHRA relented. As Race Pages Digital reported back in 2018, the sanctioning body made the change to allow street cars from 2008 onwards to compete without rollcages as long as DOT-legal tires were used and factory safety equipment was intact.

It's not yet clear whether a further revision to NHRA rules is on the horizon. In the meantime, expect to get shooed out of the staging lanes if you're laying sub-10 second passes in your new Model S Plaid—at least until you get a cage installed.

Two-time NHRA champion Larry Dixon’s Top Fuel car for two got him a ban, which his lawsuit says is depriving him of his livelihood.