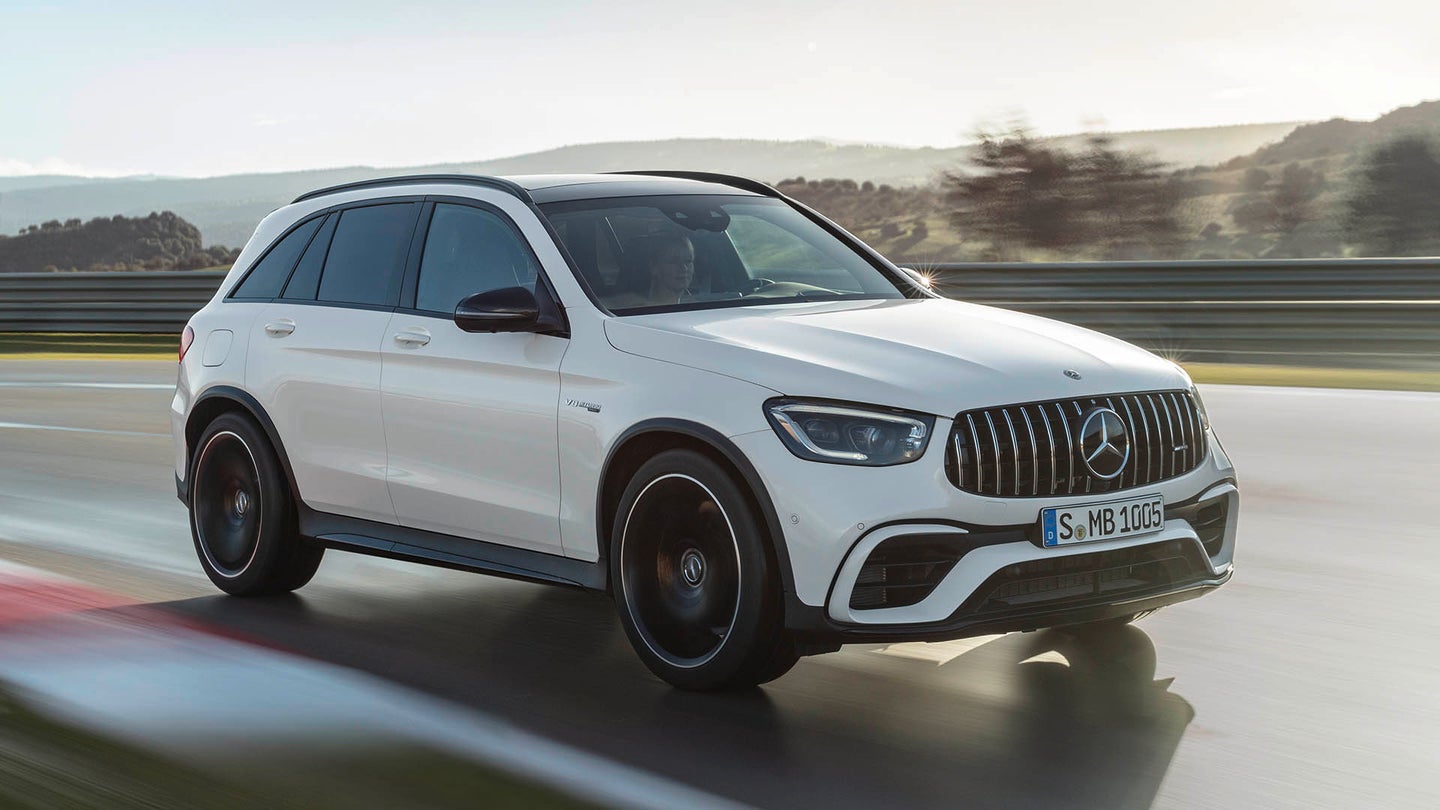 It used to be that if you wanted a Mercedes-AMG GLC 63 S—the top-of-the-line GLC model—you'd have to settle for the strange, swoopy-roofed, GLC Coupe-thing. No, it doesn't matter to Mercedes that you cannot use "coupe" to describe a four-door SUV. Yes, I will keep yelling about this until I run out of breath. But my woes have just lessened somewhat thanks to the new, 2022 Mercedes-AMG GLC 63 S SUV.

At the heart of the new SUV you'll find AMG's twin-turbo 4.0-liter V8, good for a claimed 503 horsepower and 516 pound-feet of torque. It uses a nine-speed automatic transmission and stuff like air suspension, adaptive damping, and a performance exhaust system come as standard. Inside, you also get Mercedes' slick MBUX infotainment system.

Seeing as the GLC is Mercedes' best-selling model, giving consumers another more traditional SUV-shaped SUV option makes sense. Clearly, AMG buyers demanded a non-coupe version of the GLC 63 S, as Mercedes noted as such in its press release. Introducing the new GLC 63 S SUV is the automaker complying with the market. The model itself is new to the United States. It is not a replacement for the GLC 63 S Coupe, but rather an addition.

The GLC-Class was introduced in 2015 as a five-seater SUV to replace the blocky but attractive GLK. In Mercedes-speak, it is the SUV equivalent of a C-Class. After a facelift for the 2020 model year, the entire GLC family now includes the GLC 300, GLC 300 4Matic, GLC 350e plug-in hybrid (this one is mysterious because you can see it listed on Mercedes' media page, but when you Google it and click on the top result, you get redirected to this broken page), AMG GLC 43, AMG GLC 63, and AMG GLC 63 S SUVs, as well as the GLC 300 4Matic, AMG GLC 43, AMG GLC 63, and AMG GLC 63 S Coupes. Phew!

Mercedes estimates the new SUV's zero-to-60 sprint to happen in just 3.6 seconds and its electronically limited top speed to be 174 mph. No official pricing was announced at this time, however, you can expect deliveries to start during Q4 of this year.