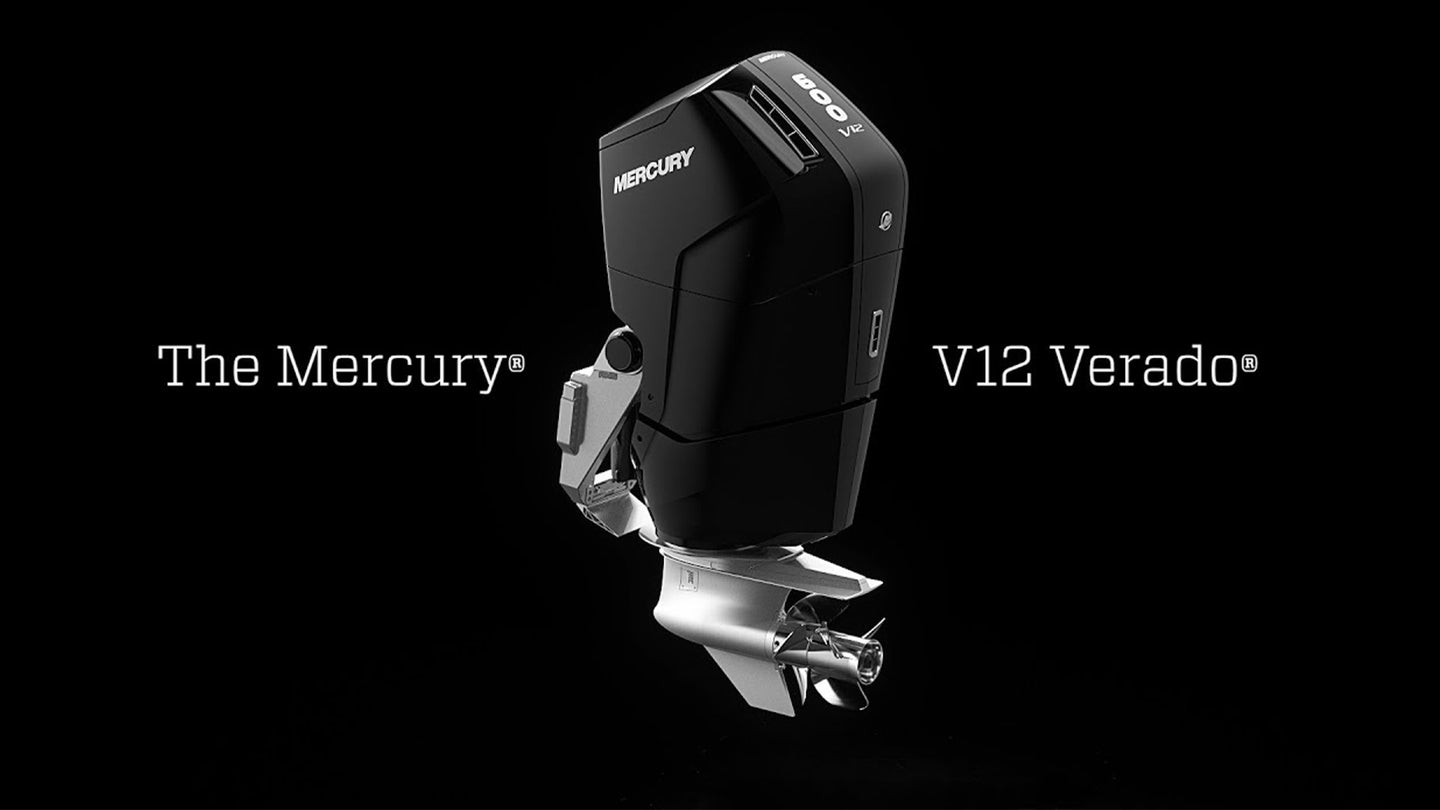 Ah, the freedom of boating. Getting out on the water with a couple of pals, wind whipping against your faces as you crank up that roaring V12. Oh, you don't have a V12 outboard on your boat? Mercury Marine can fix that, if you'd like.

Engine swaps are nothing new to the marine world—just ask Mike Finnegan from Roadkill about his boat with a wickedly boosted Hemi at the back. Still, if you're consumed by unconventional desires and would rather have something that more-or-less bolts right up, this 600-horsepower solution might be for you.

There are lots of things you can say about this outboard, like "am I afraid or excited?" Therefore, it already fulfills the main basic requirements of a V12 even before you look into any of the specs. But just in case you'd need them to be convinced it belongs strapped to the back of a fiberglass flat-bottom, here they are.

It's naturally aspirated (to be fair, a turbocharged V12 outboard would raise different existential questions) so that authentic V12 sound will be all around you as its large-displacement quad-cam powerhead applies all 600 hp to get even a heavy bass boat moving. And it probably should be a heavy boat because although Mercury Marine hasn't released the weight of this beast, it surely isn't light at 7.6 liters.

Mercury says it focused on innovative fuel efficiency and maneuverability. The V12 boasts a steerable gearcase that pivots independently from the engine's powerhead, making for a wider steering angle. Contra-rotating propellers also make it better at moving around in close quarters.

Mercury Marine President Chris Drees says, "The V12 Verado outboard delivers everything boaters want and more in a high-horsepower outboard. This engine makes boats easy to maneuver near the dock and provides superior handling at all speeds. It’s incredibly fuel efficient, so boaters can go farther and stay out longer. It’s so smooth and quiet that you can have a conversation while the engines are running."

Realistically, this is for luxury boats that weigh upwards of 30,000 pounds. Even then, those boats mount three or four of these on the back for ultimate performance, because that's what you do when you spend hundreds of thousands of dollars on your favorite pastime.

Who Needs a Boat When You Could Have an Amphicar?

You can still find these 1960s-era amphibious automobiles at summertime swim-ins across the country.

That Homemade Porsche Kart Now Has a 5.8L Mercedes-Benz V12

Giant Lifeboat Gets Smashed Up Between Cruise Ship and Container Crane

They’re for buoyancy, not buoys.