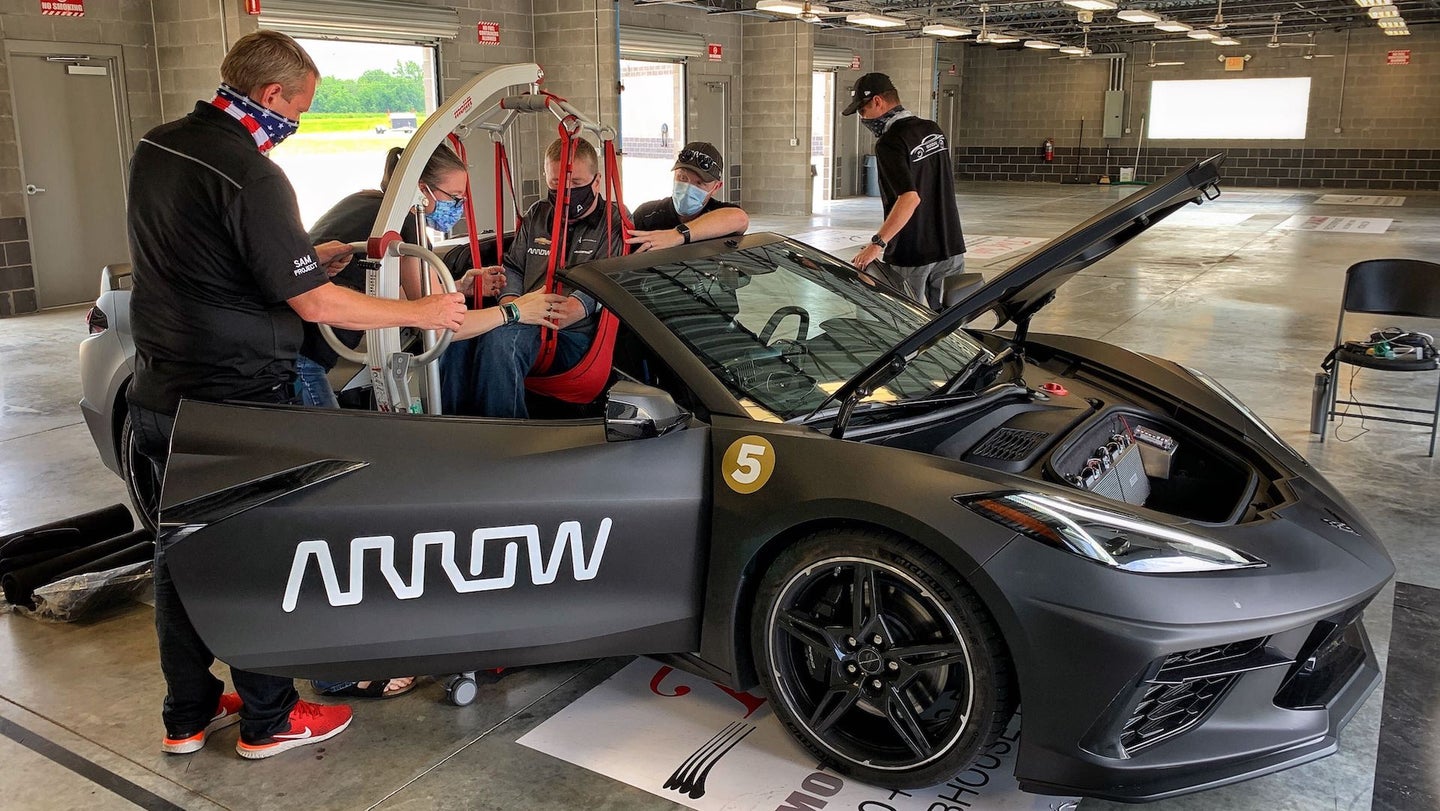 "From this moment until you get back into the garage, your only job is to keep Sam safe," an Arrow engineer told me as he closed the door to what's possibly the most technologically advanced Chevrolet Corvette Stingray in the world. I was in the driver's seat, and to my right sat Sam Schmidt, the former racer turned IndyCar team owner whose life was forever changed after a high-speed crash at Walt Disney World Speedway in 2000 damaged his spinal cord, rendering him a quadriplegic.

"If something were to go wrong with the system or with Sam, it's your responsibility to pull on the takeover paddles and regain control of the steering and pedals," the engineer added. "Now go out there and have fun."

Approximately 30 minutes before I heard those daunting words, I witnessed Schmidt get lifted out of his wheelchair—a technological masterpiece in and of itself—with a small crane and carefully lowered into the passenger seat of the matte-black C8 Corvette.

From a distance, it resembles any new 'Vette, but up close, it's a much different story. Dubbed the SAM III, which stands for Semi-Autonomous Motorcar, it is the third prototype developed by Arrow Electronics, a Colorado-based tech company that's made it possible for Schmidt to drive—and eventually race—once again. SAM I and II were C7 Z06-based units, but this one is the team's first venture with the all-new C8.

Schmidt is a man who can no longer wave hello to someone. But with SAM III, he should be capable of driving on a race track at triple-digit speeds, safely, and in complete control.

For Schmidt, who lost almost all of his mobility in that crash, it's a chance to not only taste the thrill of speed once again but to experience the kind of freedom that most of us take for granted.

"If you ask anyone with a disability, what is their idea of a cure, each person will give you a unique answer because everyone is different," Schmidt told me. "My idea of my cure right now is to be able to do this. If I could quit my day job and do this the whole time, I would."

Inside the cabin, trunk, and frunk of the Corvette, there's an array of components that would seem more at home in a Silicon Valley prototype than anything that's ever rolled off a Bowling Green assembly line: AI computers, cameras, sensors, and a fire suppression system. There are six cameras mounted directly in front of the passenger seat, which is where Schmidt drives from. The top four cameras are infrared units that track head movement with pinpoint accuracy, while the lower two are "3D ToF" cameras or "time of flight," which are normally used for virtual terrain mapping.

The ToF cameras validate Schmidt's nose position to generate a centerline for steering purposes, while the infrared units track strategically placed dots on Schmidt's sunglasses. These custom sunglasses are the equivalent to the black devices that Electronic Arts puts on athletes when recording human movement for video games like NBA 2K.

In this case, however, the stakes are higher than any game. The better the sunglasses are tracked by the cameras, the more accurate and safer the car's performance will be while lapping the Indianapolis Motor Speedway, tackling Pikes Peak, or driving 60 blocks in New York City traffic—all of which Schmidt has successfully done in previous SAM cars.

While I could make sense of the technology I was shown by the crew, understand how it works, and grasp my mind around what the final product looked like—after all, I've seen the videos of Schmidt driving before—I wasn't emotionally prepared for what was about to happen when I joined him for a ride.

For Schmidt, the process of driving begins with the removal of the Corvette's roof, which makes it easier for the crane to lower him into his seat. Unlike in previous SAMs, he actually drives the car from the passenger seat rather than the driver's. In doing so, it allows the co-driver to be well-positioned at the stock wheel and pedals in case something were to go wrong, and it keeps Arrow engineers from having to fabricate backup steering and pedals like they had to in previous SAM prototypes, where Schmidt drove from the driver's seat. While this makes perfect sense, in reality, it looks bizarre.

Once Schmidt is carefully positioned in the seat, the crew must properly restrain him to make sure his body doesn't move while the car turns from side to side on the track. Because of his condition, Schmidt can't hold his body upright while turning, braking, or accelerating—he only has control of his body from the neck and up. Previous cars were fitted with racing seats and six-point harnesses to hold him in place, but due to the fact that the C8 is so new that its aftermarket is somewhat limited at the moment, the Arrows crew had to get creative when it came to securing the boss to his seat.

The final step before hitting the road is to activate and calibrate all systems, and because this C8 is still in a somewhat developmental phase, it took a couple of engineers to get things right before our outing. During my day with the team at Indy's Putnam Park private road course, this process also involved dozens of test laps by nine-time Pikes Peak winner Robbie Unser, who actually used to compete against Schmidt back in the day but now works closely with him in the SAM project.

First, a big red knob located inside the frunk must be turned from Car to Car+Arrow. Then, the systems' mapping must be set to autocross, road course, Pikes Peak, or oval. The former is the sharpest, while the latter is the most "relaxed." Next, the sunglasses must be properly paired to make sure the alignment with the car's steering system is accurate.

Finally, a quick check of what Arrow calls the "sip and puff" (the straw that goes in Schmidt's mouth) must be checked to make sure it engages the brake and throttle systems. Of course, the latter gives Schmidt a chance to rev the C8 to its redline while parked—which judging by his loud laugh—he most definitely enjoys.

With the checklist complete, I shifted the Corvette's eight-speed dual-clutch automatic transmission into gear and made my way to the pit lane. Schmidt had agreed to do multiple laps at a strong pace but taking it easy for one lap so I could record some video. After all, I was the co-driver and my job was, as I was told, to keep him safe.

After flipping a switch and granting Schmidt control of his car, the 6.2-liter V8 flexed its 495 horses on Putnam's main straight and rocketed toward the first corner. To activate the brakes, all Schmidt had to do was "sip" on the straw in his mouth in the same way he'd have a drink. Before I realized it, he had braked, steered right, accelerated, and painted a beautiful racing line through the double-apex right-hander.

The next couple of corners were a series of esses that Schmidt navigated up to 70 mph. Each time he "turned the wheel" the car would gently shift its weight, squat, shift a gear down or two, and rocket out of the corner in search of the next one. From my perspective as the passenger—who happened to be sitting in the driver's seat—it would've been commendable driving under normal circumstances, but these weren't normal circumstances. Not by a damn long shot.

The big a-ha moment came at the track's most challenging corner, a left-hand carousel that dips on entry and elevates on exit. Its swoopy and elongated nature puts the car's balance and driver's skill to the test equally.

Schmidt, as he did in most turns, came in hot, clamped hard on the brakes, and gently waltzed the Corvette down and then up the hill following the corner's radius. Broken down technically, Schmidt had to come into the corner with his head straight, sip on the straw to brake, turn his head left to make the corner, and then gently puff on the straw while unwinding his head to the right before puffing some more for full power.

I should've known at the time, but Schmidt's idea of "taking it easy" was to do 110 mph down the main straight and pull 1.25 Gs in the corners, which I was told by the engineers was about the limit for the car on stock rubber. When I wasn't recording, however, speeds crept up to over 120 mph.

"The C8 is so much more drivable than the (C7) Z06, it's so well balanced," Schmidt told me as we cruised back into the pits. "It handles as good as any Lamborghini or Ferrari. "The Z06 it's so much power, you're constantly driving the car on the rear tires alone and just waiting for it to snap."

The fusion of technology and extraordinary human willpower had left me speechless. The entire experience was downright emotional—almost spiritual. I'm not being hyperbolic when I say it left me shaken to my core, experiencing something so carefully designed to achieve such a higher goal. This is more than just a car for Schmidt. It's freedom. It's control.

See, Schmidt is basically never in control throughout his day—he told me that himself once back in the garage. He relies on his wheelchair, his Braunability Honda Odyssey, special technology, and his personal assistant to complete life's most basic tasks. In his condition, nothing is easy.

To see him go from that, to driving me around a racetrack, is mind-blowing. It's the kind of stuff that older civilizations would've categorized as magic.

Like its predecessors, the SAM III will go for many drives around the country, make appearances at large motor racing events, and give Schmidt and fools like me many happy memories. More importantly, however, is that it will also give many people affected by paralysis and other conditions the absolute ride of their lives. And it may be able to help them someday in similar ways.

"Arrow's philosophy is to keep developing this technology for years to come, and if anybody can use this type of technology to help somebody then we'll give it to them for free," Schmidt said. "Arrow is a $30 billion publicly-traded company with this kind of moral compass and willingness to give back to society."

"This technology could eventually help a disabled person simply drive themselves to work—that's the one thing most disabled people want to do—or even let a farmer operate his tractor without even leaving his house. There's a very wide range of applications for this technology," Shmidt added.

At the events organized by Schmidt's foundation, Conquer Paralysis Now, some of these folks actually get to drive the car, and for many of them, it could be their only chance ever to know what it's like to drive a car. And that is, quite literally, priceless.

"We bring all three cars out and invite people over," Schmidt told me. "And their face says it all—there's lots of tears from them, their families, their caregivers. That is as exciting for me to see as it is to get out on the track."