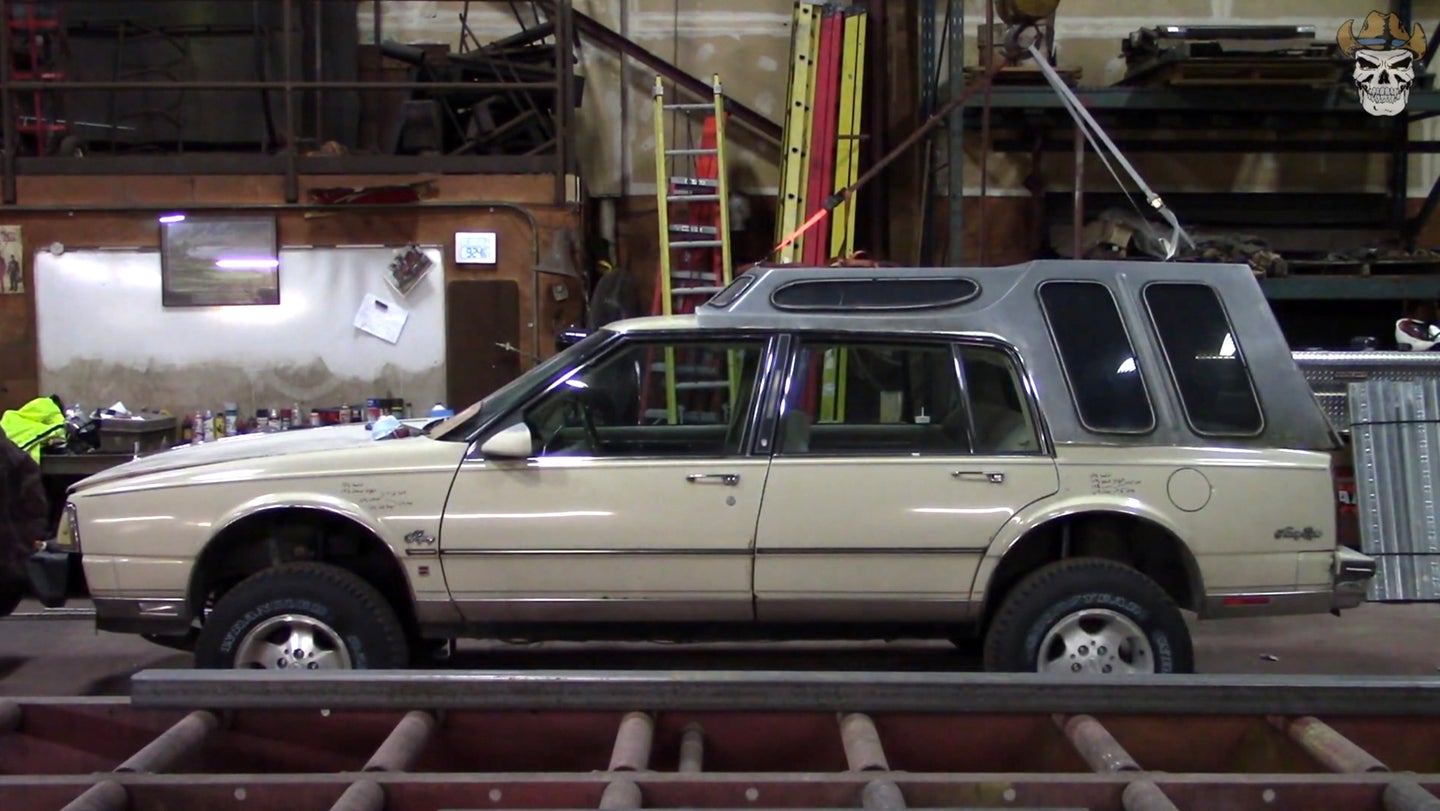 One of the most enviable garages on the internet isn't the world's largest BMW Isetta collection or one full of track-prepped supercars. No! It's that of YouTuber PostalRedneck, whose garage appears to be a magnet for Oldsmobile Ninety-Eights.

I admit that I am slightly biased. I love a good brougham. Worse yet, my mom had a 1988 Oldsmobile Ninety-Eight Regency Brougham when I was a kid. It was the first car I ever got to drive around a parking lot. It's a good car. Naturally, I am amused at PostalRedneck's yellow 1986 Ninety-Eight Regency Brougham, which now features a 5,000-lb Harbor Freight winch, a mild lift and a camper shell.

The channel has featured a few Gambler 500 cars, and this is one of them. The Gambler 500 is an especially rowdy cheap-car navigational rally, and if you haven't done one yet, you absolutely should. This Ninety Eight arrived in rough shape, so this is truly the greatest use of it.

Rotted bumpers? Throw on a pair of

stock Jeep ones since everyone seems to ditch those anyway. Gambler 500 terrain ahead? Why, there's a mild lift

and the Ninety Eight Regency Brougham's plush velour seats, my dear chap. Exhaust too quiet? Simply remove that muffler, s'il vous plaît. Need to give the engine a bit more breathing room? Give it a cowl hood—why not?

The real star of the show is the bed cap, though. The trunk was taken out to allow the topper to sit over a proper bed space, and the rear roof and windows were left intact for that full pickup-with-a-cap effect.

The side profile of this works far better than it has any right to. Should the late-eighties Ninety-Eight have had a wagon version after all?

PostalRedneck seems pleased with his creation when he finally test drove it after several fixes.

"This thing's amazing! The ride quality is just beautiful. It's like you're floating on a cloud," he said. "The heat works really good, and it's everything I ever wanted it to be. I gotta say, I'm impressed with how this thing rides."

That sounds like a genuinely enviable (because it's comfortable) Gambler rig.

The extremely classy Regency Brougham has since gained a moon visor from a Ford Ranger that added just a little bit extra to the car's roof, plus additional lighting around the roof. Another metal panel was added to bridge the gap between the trunk and the topper, too.

If there isn't a better example of "weird idea, excellent execution," I don't know what is. Our tips line is always open if you find it, though: tips@thedrive.com.