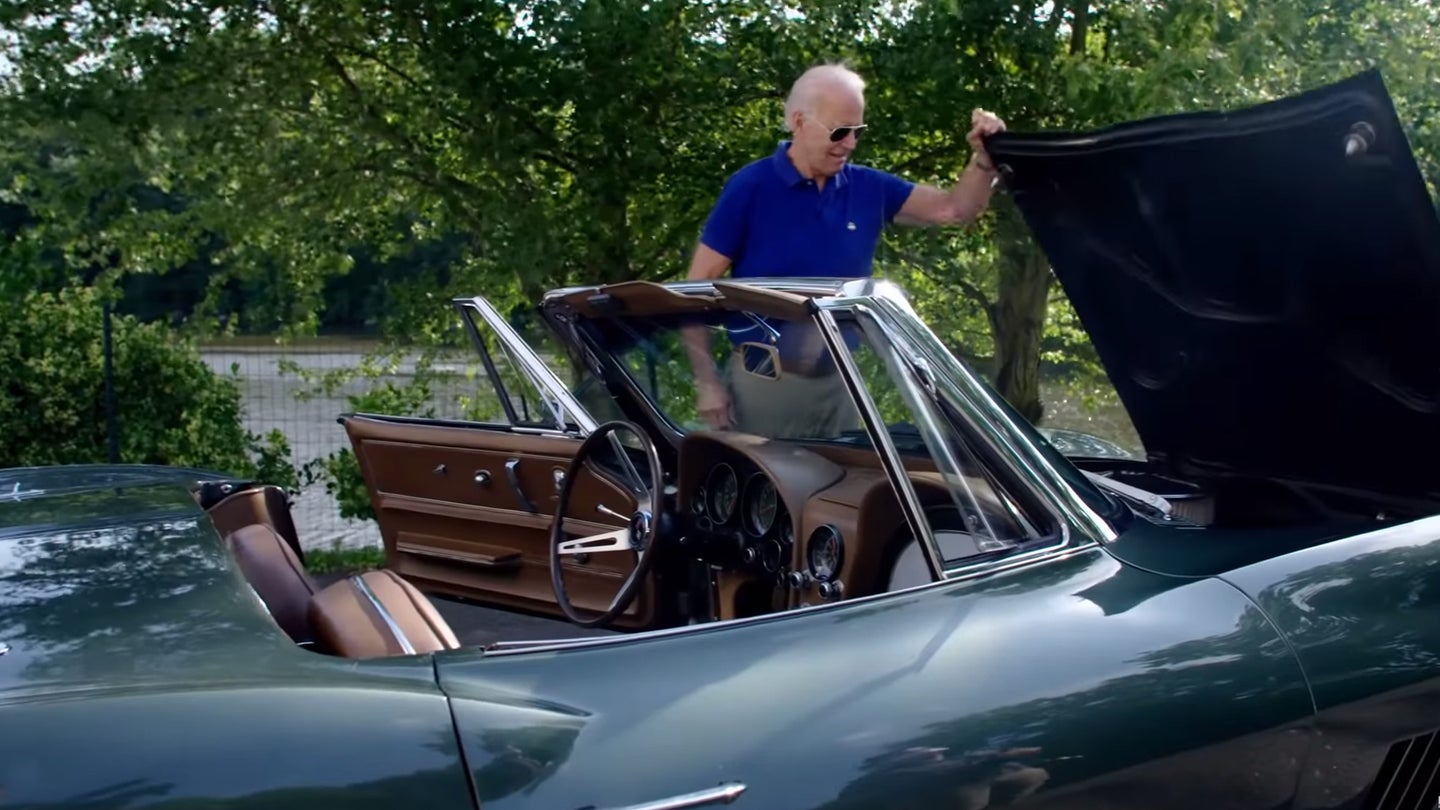 As wild as the 2020 U.S. presidential election season has been so far, one development we did not have on our bingo card is this one: Does Joe Biden know something the rest of us don't about the future of the Chevrolet Corvette? That's a baffling sentence to write even amid this exhausting and oftentimes horrifying year, but now it's up for discussion thanks to yesterday's video from the Biden campaign.

On Wednesday, Biden—the former Vice President and presumptive Democratic nominee—released a new ad showing him behind the wheel of his 1967 Chevrolet Corvette Stingray. And sure, we could ogle the C2 all day, admiring its tasteful shade of Goodwood Green and saddle brown leather seats.

But there's something more important to take away from this video, and that's whether or not Biden has inside information about an electric Corvette he says is capable of 200 mph.

"And by the way, they tell me, and I'm looking forward to it if it's true to driving one, that they're making an electric Corvette that can go 200 miles an hour," Biden said in the ad, using his distinctly Biden manner of speaking. "You think I'm kidding? I'm not kidding. I'm excited about it."

There's no telling who "they" is in this case—but given Biden's longstanding GM fandom, role in the previous White House that handled the auto industry bailouts and the connections that come with being a person his stature, it is very possible he's onto something here. And considering how tightly automakers control news about future product, who knows—Biden may have just blown up Chevy's spot.

Or he's just quoting something he read in Motor Trend, or heard about from some gearhead friend. We don't know yet. It can be hard to tell with him sometimes.

Perhaps Biden is referencing something we've spotted in the wild earlier this year: the all-wheel-drive C8 Corvette Hybrid. We know that GM has pre-planned for the C8 to move under electric-only power, as the owner's manual shows fuse slots for both a pedestrian alert system and lithium-ion battery module. And some details about the hybrid Corvette have already been gleaned by internet detectives.

But these comments have us wondering: could GM be planning a full battery-electric version of the C8, and not just a hybrid? Did someone at GM mention it to Biden, perhaps recently?

GM has aggressive plans to pivot to fully electric power in the years and decades to come, stating its eventual goal is zero emissions across the board. There's the rumored electric Chevrolet pickup, the new Hummer being sold under the GMC brand, and even Cadillac has its Lyriq all-electric SUV going on sale next year. (More details on that are coming today.) An electrified sports car offering might be the next step to get new car buyers interested in plug-in vehicles. And with the Corvette specifically, GM has said its intention is to really take America's sports car to the next level. Eventually, that could mean losing the engine entirely.

In this ad, Biden talks about the American auto industry "own[ing] the 21st-century market again" by moving to electric vehicles. He's already spoken of a Cash for Clunkers-style program for green cars. Will that include a greener, faster Corvette? Who knows. Biden says a lot of things. But one thing's for sure: there's probably at least a few people freaking out inside GM's Renaissance Center headquarters this morning.