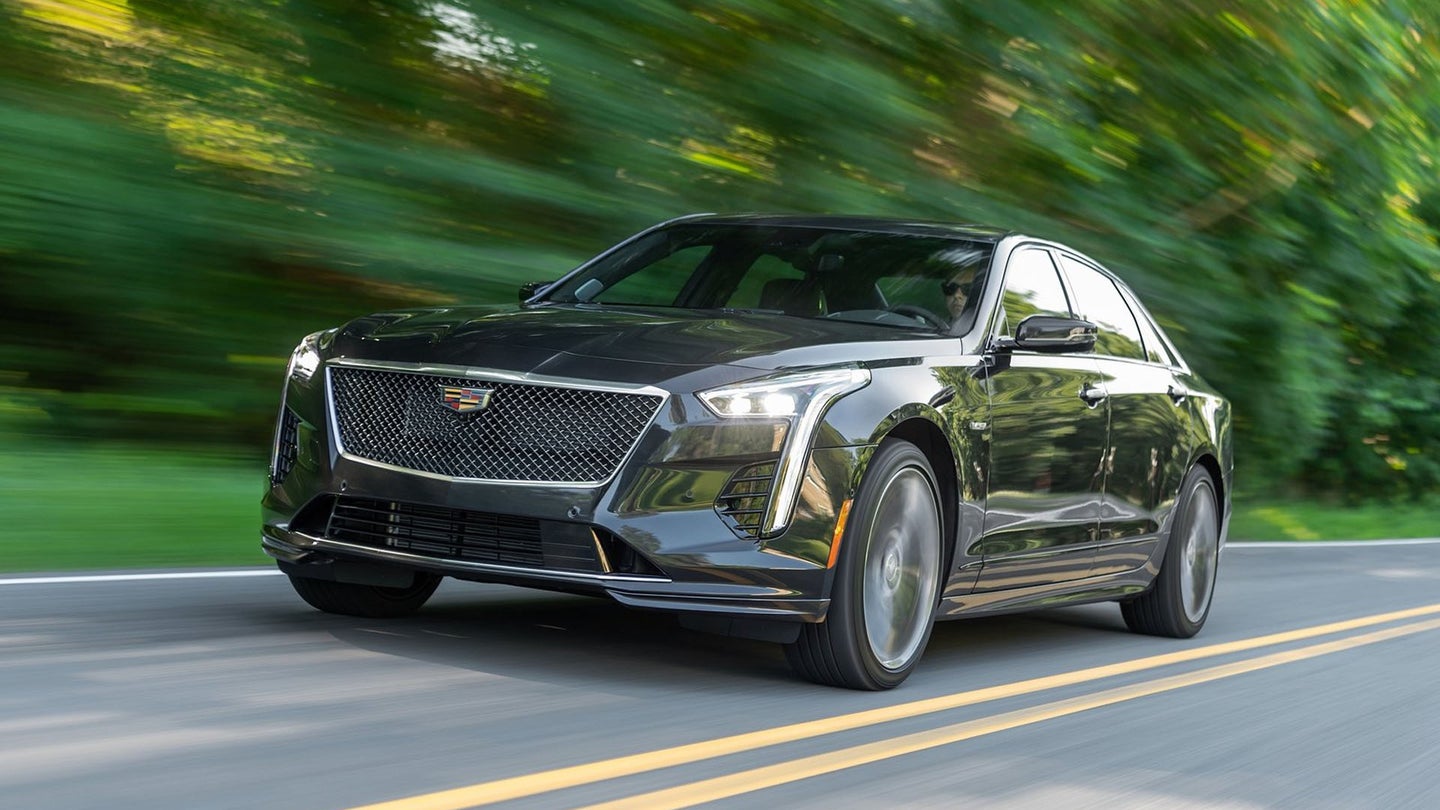 Good morning and welcome back to Speed Lines, The Drive's roundup of what matters in the world of cars and transportation. Today we're discussing Cadillac's latest debacle, Tesla sales in California and what Infiniti's new boss wants to do with the brand (we have no idea).

$16 Million Down The Drain

If you're an enthusiast, you probably aren't alone lately in being simultaneously let down and baffled by the latest iteration of Cadillac. After years of tire-melting, German-fighting favorites like the CTS-V and ATS-V—even though they admittedly weren't strong sellers—we have a pretty underwhelming and unappealing lineup. The XT4, XT5 and XT6 have all garnered lukewarm and disappointing reviews. The CT4 and CT5 aren't exactly the kinds of cars you dream about, and while we gave the CT5-V decent marks, they're still a far cry from the V-cars we're used to. (They're getting variants to fix that, supposedly.)

But the poster child for Cadillac's modern struggles has been the Blackwing engine: a twin-turbocharged, 4.2-liter, 550-horsepower V8 that's going to the junkyard after just two years in just one car—a car that is also being canceled. What happened here, exactly?

An A+ story from Road & Track dives into all that, and speaks to larger issues within Cadillac, the General Motors machine, and a brand that's on its umpteenth struggle to find its way. It's worth a read in full, but the gist is Cadillac missed the rise of crossovers, and in a way that made the full-size Omega platform—which underpins the CT6—no longer viable. And the sexy Escala concept joined the ranks of other sexy Cadillac concepts destined for the garbage can:

But while the Blackwing was under development, Cadillac’s situation changed. “As the world really started to shift—and especially as sedans started to disappear—it got harder and harder to justify continuing the strategy of building new derivatives of the Omega platform,” one of our sources said. “They weren’t all sedans, but if you didn’t have the sedans, the sport-utilities got more and more expensive. At some point, financially, it just wasn’t a good strategy, so one by one, those Omega derivatives disappeared, and in the end, the CT6 was left all by itself.”

Besides the rising costs, an Omega crossover needed more development resources than GM wanted to put into it; the automaker was too focused on actual profit centers like full-size trucks and SUVs instead. GM didn't want to commit resources to truly turning Cadillac around as former division chief Johan de Nysschen repeatedly clashed with Detroit management. Instead of an Omega crossover that could really fight BMW, we got the XT6, a fancied-up Chevrolet Traverse, and the Blackwing engine had to die too despite a $16-million development cost:

It’s unlikely we’ll see it again. Whether the engine can fit in the CT4 or CT5 is unclear, and even if it could, such a low-volume offering doesn’t seem to align with Cadillac’s current plans. The company does intend to offer a high-performance version of each of those sedans, ironically and confusingly wearing the Blackwing name even though they won’t use that engine. It’s also not clear whether the twin-turbo V-8 will ever see use in the new Escalade, though that, too, seems unlikely. At the reveal of the new Escalade this past February, de Nysschen’s successor, Steve Carlisle, told R&T that Cadillac has “no plans” for the Blackwing.

It's true that Cadillac's early/mid-2010s performance cars weren't volume sellers, and that the brand needed more big people-haulers beyond the Escalade. And it's true that one twin-turbo V8 probably wouldn't have "saved" the brand.

But all of this begs the question: after so many false starts, strategy changes and reboots, how many more chances does GM think Cadillac has? Increasingly, it's missing out on several generations of new buyers. The only people who remember "the Standard of the World" seem to be Baby Boomer GM executives in Michigan.

Cadillac is supposed to be going electric next, and even GM President Mark Reuss has bluntly said "this is pretty much it" in terms of the brand's future. But its recent track record shouldn't fill anyone with much confidence, and one wonders if its blah current lineup is really enough to carry it into its EV future. Also, as that story notes, the electric Celestiq fastback is to be "hand-built in very small numbers, and could cost upwards of $200,000."

Right. I'd rather take bets on which automotive news outlet will be the first to tell the real story of that car's cancellation when it inevitably happens.

Speaking of luxury car failson brands, amid Nissan's ongoing struggles, Infiniti has a new boss: Peyman Kargar, a longtime Renault executive who took over at the beginning of this month. He has his work cut out for him, especially with Nissan aggressively cutting costs and saying directly that future Infiniti models will be "Nissan-plus" more than anything else.

In this Automotive News interview, Kargar gives a master class in not giving insightful answers to questions with responses like "the diagnosis is not at all finished" and "I'm going to be able to leverage the full strength and resources of the Nissan company." He also doesn't want to talk about the brand's profitability.

But he does shed a little bit of light on the future of Infiniti, which seems to be to make more use of Nissan's e-Power hybrid system:

We will have a high-performance, exclusive version of e-Power. The name is not yet completely decided, and we will disclose it in a few months. We will have more horsepower — much more — to represent Infiniti because that's one of the ingredients of the DNA of Infiniti.

And the second point is the serenity — the silence on board. Not only the powertrain, but the body. In the plan, we will have an ICE offering, high-performance e-Power and a pure EV.

As rough as the Cadillac news was, Infiniti's in an even worse spot here, somehow.

Tesla Registrations Way Down In California

California remains Tesla's most important market, and the electric automaker had a better Q1 than many rivals. But it's not immune to the current economic downturn, and while Elon Musk was quick to rush his workers back to the factory amid the pandemic, his company hasn't been met with open arms by tons of buyers in the Golden State.

This, from the Wall Street Journal:

Nationwide data isn’t yet available. But across the 24 states that Dominion tracks, Tesla registrations declined 33% to 14,151 vehicles during the first two months of the quarter compared with a year ago, while those for the broader industry fell 43%. The researcher estimates the markets tracked, including New York, Florida, Texas, make up 65% of the whole U.S. auto market.

Tesla has questioned the value of registration data in the past. As the WSJ notes, this could be bad news for Tesla's record-high stock price, but I'm not sure I agree it's exceptional news; every automaker's sales are way down right now, so this may just be par for the course. Tesla should probably be more worried about quality issues with the new Model Y.

The Incident on the A-Road (Vice)

You are walking down the street one day, minding your own business (and hopefully wearing a mask while keeping the appropriate distance from others) when a man appears in front of you. He looks haggard, exhausted. He is Steve Carlisle, the president of Cadillac, and he is clearly at the end of his rope.

He reaches out to you. "You must carry on the work I began," he says cryptically. Lightning shoots out of his hands and enters your body; Steve Carlisle's power now courses through your veins. He then vanishes in a brilliant flash of light.

You have inherited his great power. You are now the president of Cadillac.

What do you do?