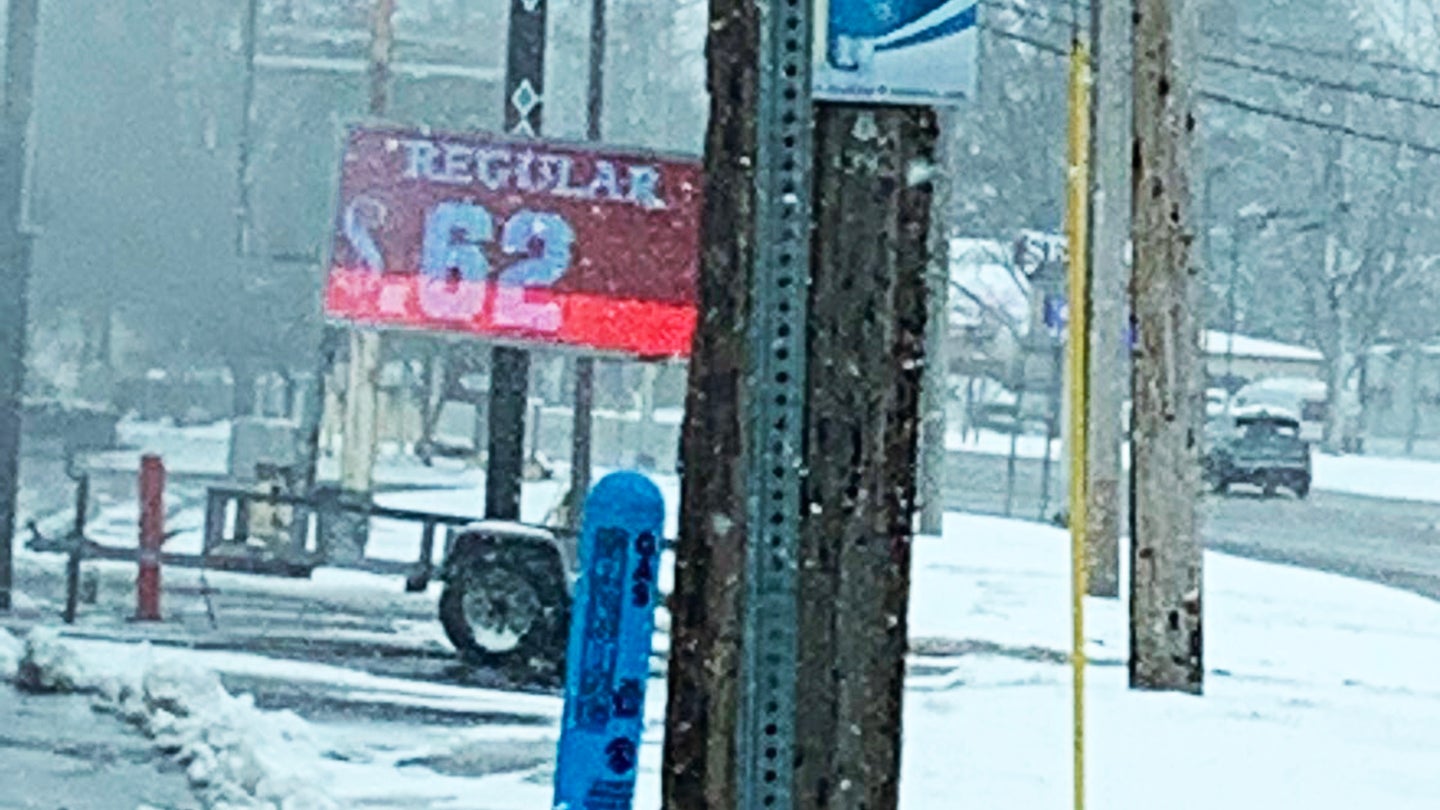 Among the many effects of the coronavirus pandemic ripping apart the U.S. economy is a steep drop in gas prices, brought on by plummeting demand as people stay at home and an international oil price war between Russia and Saudi Arabia. The national average for regular 87 octane currently sits at a decade-low $1.88. We've chronicled stations undercutting that significantly, mostly for publicity, but it appears another price war underway in a small town in western New York has brought about a new record low: $0.62 per gallon.

Analyst Patrick De Haan of the industry tracking site GasBuddy.com highlighted the micro trend after a Twitter user snapped a picture of the pricing display at Allegany Gas & Smokes in Salamanca, New York, a town of about 5,000 people in the Allegany Indian Reservation. The original report described it as a price war, and sure enough, at least three of the six-plus gas stations in the area are currently sitting under a buck a gallon for regular fuel. $0.62 is below the previous mark of $0.69 set by an Ohio station last month.

Allegany Gas & Smokes is clearly going for broke with $0.62, with NAFCO Quick Stop right on its heels at $0.71 earlier today (the price there has since gone back up to $0.99). But an employee at NAFCO told The Drive that the real source of the price war is a new gas station in down the road called M & M Junction that just opened up a few weeks ago. The employee said the owners there have consistently been dropping the price below profitable levels, spurring other nearby stations to follow suit.

It should be noted that this is happening on the heels of a late winter storm moving through the region, meaning there's even less demand than the new normal under New York's stay-at-home order. But people will always line up for historically cheap gas—the employee added that yesterday was "crazy" at NAFCO, with customers showing up to fill multiple 55 gallon drums with $0.71 gas or drop a couple hundred dollars on a single epic transaction. With the price back up to a buck, today is a lot calmer.

The $0.62 price is still active at Allegany Gas & Smokes, where a clerk who answered the phone at declined to provide any information. Likewise, a call to M&M Junction went unanswered, so the full story of this small-town price war remains untold. But if you're planning some essential travel through western New York, you know where to stop for gas.

UK Gas Stations Face Closure Over Low Demand. Are US Stations Next?

Britain’s gas consumption has plunged 75 percent as of late, forcing small-scale operations out of business.