What good are electric vehicles if our bridges and roads are still falling apart? 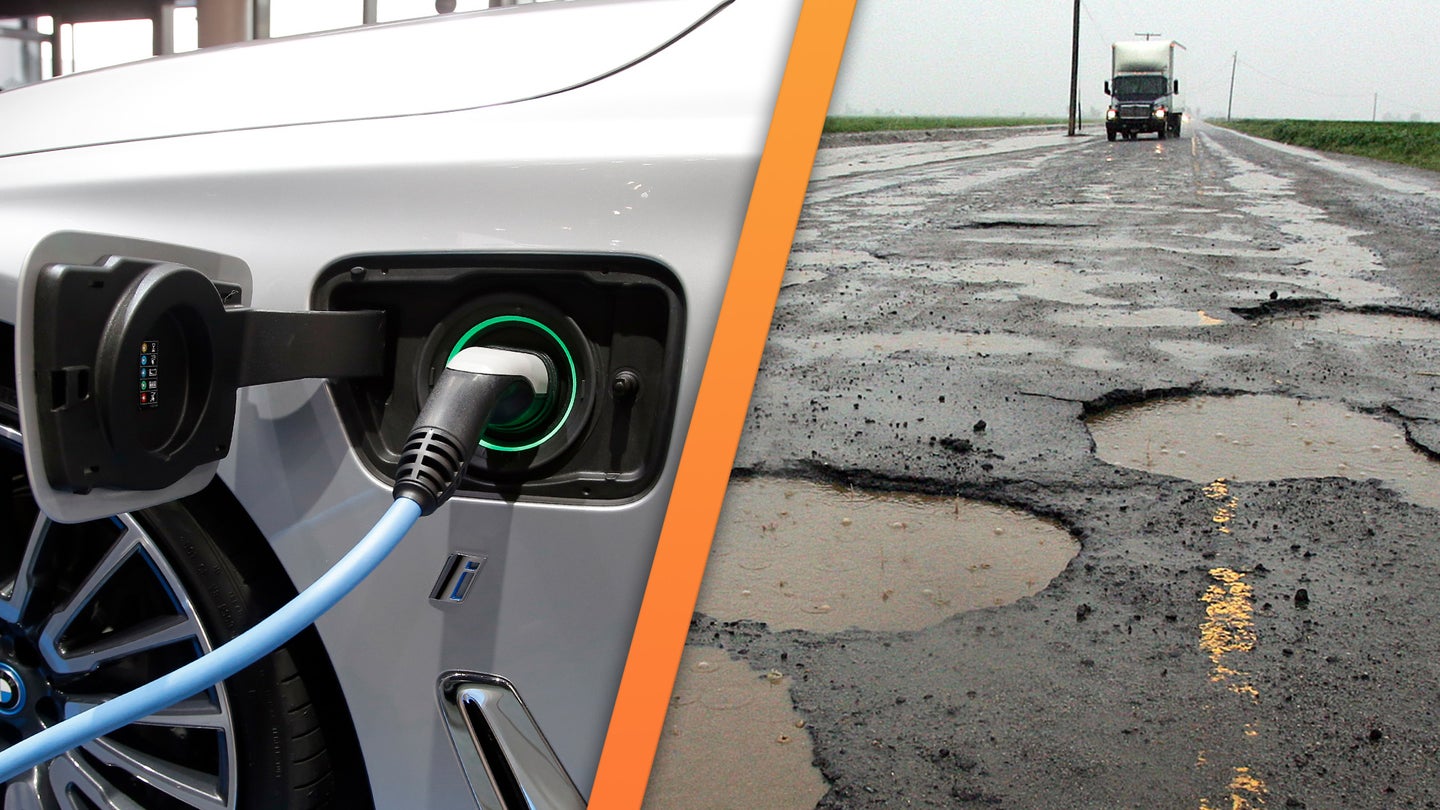 Los Angeles, 2042. The sun rises on another day, the crystalline blue sky a reminder of how much smog levels have dropped since California banned the sale of gas-burning vehicles in the late 2030s.

Electric car adoption is still spreading across the country in fits and starts, but here in the cradle of zero-emissions rules, tax incentives and investments in a public fast-charging network have seen most drivers switch over. It's been a long, tortuous process, but the future you were promised is finally here.

Anyway, time for work. You get dressed, slurp down some nutrient slurry and walk out to your Honda-E (in this vision, Honda eventually came to its senses and eventually released its cute EV in America). Easing out of your driveway, you make for the I-10 freeway—the same eight-lane disaster zone it's always been—dodging giant potholes, random piles of gravel from abandoned roadworks projects and more than a few broken curb chunks. Ochre trails from rusting street signs and guardrails color the concrete everywhere.

Traffic still sucks; it's been decades since Los Angeles attempted to repave its main arteries, let alone build a new one.

So, this is not exactly the future you were promised. Yet it's a glimpse at a looming, oft-overlooked and critically important problem with the impending shift to EVs. Currently, a large majority of infrastructure projects (including mass transit) and maintenance in this country are funded by a single source: the gas tax, paid by consumers at the pump. An electric car makes no harmful emissions as it tootles along a road, but its driver also contributes nothing to that road's upkeep while wearing it down all the same.

This isn't a huge deal right now given electric vehicles' minuscule market share—but mass EV adoption in the coming years will decimate transportation and infrastructure funding in this country without a complete rethink of how we pay for these vital projects.

The gas tax can be complicated, but the basics are that both federal and state governments impose a surcharge that's built into the final price at the pump. They're nothing new—the federal government has been imposing gas taxes since the 1930s, and some states did it even earlier.

The gas station itself is then responsible for paying over the tax to the state and federal Highway Trust Funds. Federal officials pool that money and distribute it back out to state and local agencies for infrastructure repairs, new construction and transit subsidies. (Despite the name, the Highway Trust Fund is also the primary source of federal mass transit funding.)

As far as taxes go, it's a pretty useful one. The average motorist never thinks about it. There are no returns to file, no logbooks to fill out. It does a reasonable job of matching road use to individual cost—the tax might not be able to tell an 8-mpg Dodge Challenger from an 8-mpg delivery truck, but someone who drives 20,000 miles a year pays four times more than someone driving 5,000 miles. The revenue stream is unending when the whole world runs on gasoline—the current and unprecedented drop in demand notwithstanding—and pretty much everyone agrees on the need to upgrade our country's infrastructure. (How to do that, however, is where things get contentious.)

There's also an element of local control. Due to the way federal money and state money is allocated, a driver filling up in Philadelphia is likely to fund projects close to where they live. Local politicians control each state's gas tax rates—ranging from about 15 cents per gallon in Alaska to about 59 cents per gallon in Pennsylvania—and which projects get funded from it. If the roads where you live are terrible or the public transit system isn’t useable and you're still paying too much at the pump, you're at least empowered to vote the people responsible out of office.

For all their benefits to cleaner air, less fossil fuel usage and even performance, electric vehicles represent an existential threat to this financial structure, which will need to be replaced entirely if we are to successfully shift away from fossil fuels. That's decades from now; more immediately, early adopters will continue to erode the bulwark.

And it's not like the gas tax has been bolstered by congressional action—the federal take of 18.4 cents per gallon (24.4 cents for diesel) hasn't been raised since 1993. Since then, cars have gotten generally larger but also more fuel-efficient. In 1993, the average passenger car weighed 2,900 pounds and got 20.6 miles to the gallon. In 2018, the average vehicle weighed closer to 4,000 pounds and got 25.1 miles per gallon.

A boon for consumers, but a big problem for transportation budgets.

The Money Is Already Running Out

As a result, there's more wear and tear on roads today, but less money coming in to sustain the cash flow to infrastructure projects. Factor in inflation—a dollar today has 40 percent less purchasing power than it did in 1993—Congress' failure to raise the federal tax means it's effectively decided the average motorist's fair share of maintaining the roads is less than it was 27 years ago.

The end result is that since 2001, the Highway Trust Fund has operated at a deficit. And now that electric vehicles have started to make the leap from early adopters to average highway commuters, the crisis will only deepen.

As many a snarky Tesla vanity plate has declared, EVs don't need gasoline, and therefore their owners aren't paying a cent towards road maintenance right now. It's a classic free-rider problem, and for a while, it could be ignored. The promise of clean air and eco-friendly transportation makes it easy to put off considering just how difficult it will be to find an acceptable replacement for the gas tax. It still does, mind you—electric cars still comprised under two percent of the U.S. new car market in 2019, and federal data from the Congressional Research Service indicates that just 1.1 percent of all vehicles registered in the country are electric.

That said, all those new EVs are currently estimated to be lowering gas tax revenues by $104 million a year. This loss is felt far more at the state level because 46 out of 50 states have gas taxes higher than the federal rate, and states can’t just ask Congress for a bailout every few years. And while it's far too soon to feel the effects, the way the current pandemic crisis has sent the demand for gas plummeting to historic lows will offer an unintended preview of what's to come when next year's budgets take a huge hit.

If electric vehicle adoption reaches 25 percent, let alone 50 percent of total registered vehicles, transportation funding would be devastated. Unfortunately, there's no easy solution, and the two most likely options both have major drawbacks.

No Easy Replacement for the Gas Tax

The most direct replacement for an electric vehicle version of the gas tax is vehicle mile tax (VMT). As the name suggests, this tax involves tracking an individual vehicle and then sending the owner of a bill based upon their road usage. A version of this has already been implemented on commercial trucks in places like New York, Kentucky, Oregon, which also tested it with passenger cars back in the mid-2000s before the GPS-enabled vehicles were widespread.

Technologically speaking, implementing a VMT wouldn't be hard. It just takes the political will to mandate that all new vehicles come with the tech to transmit mileage counts to a government registry, which would then mail an appropriate bill to the registered owner.

The issue here? I mean, have you seen America? We can't agree on anything, except how much we hate being told what to do. We're paranoid of the government and big tech companies, in large part because both groups keep giving us reasons to be. And good luck explaining to concerned citizens that the feds and the startups alike wouldn't also be tracking their location along with mileage, even if that's already happening with their smartphones.

In the land of the free, getting what amounts to an itemized bill for your trips to the grocery store or grandma's house is at odds with our sense of identity. And is it really a good idea to make another pool of private data available to the highest bidder?

There's also the problem of what happens if you cannot or do not pay the bill due. A VMT tax is regressive, meaning it sucks up a larger chunk of a lower-income driver's paycheck than someone making more money and driving the same amount. If someone making minimum wage can't pay their $40 quarterly road tax, it's not exactly a societal benefit to revoke their registration for non-payment and prevent them from getting to work. But some form of enforcement will be still be needed, otherwise, why pay it?

Another, more temporary option that states like California, Kansas and Ohio are toying with is raising registration fees for electric cars. New California EV owners can look forward to an extra $100 surcharge on top of normal fees beginning of July of this year, which will get charged again in varying amounts upon each renewal.

But this is still a money loser; even for an average driver, something like California's extra registration fee claws back less than half of the money the state would normally earn on gasoline sales to the owner of a 25-mpg car driven 12,000 miles per year. To break even, California would need to raise that figure by four times.

This is politically difficult—any lawmaker seeking to impose or raise a registration fee on electric cars will be accused of standing in the way of green technology. For many single-issue voters, clean air is an exclusive goal that shouldn't be balanced by other funding. Transportation funding is an extremely dense subject, and it can be next to impossible for politicians to explain the direct link between higher electric car fees and improved mass transit, the spread of which would also ease the burden on roads a bit.

There's a quote often (and probably incorrectly) attributed to Winston Churchill that goes, "You can always count on Americans to do the right thing—after they’ve tried everything else." Whether he said it or not, right now America is firmly in the “everything else” phase of this problem even as our infrastructure crumbles around us. For all the tough talk from politicians on transportation funding, the last major federal highway bill in 2015 resorted to gimmicks like revoking passports if you don't pay your old tax debts to raise extra cash for roads. But until there is a reliable revenue stream that is paid for by all vehicles to supplement or replace the gas tax, we are stuck with the status quo.

So the next time you are waiting at a stoplight behind a 5,400-pound Tesla Model X 100D and a 5,300-pound Chevy Tahoe, take a moment to consider that while the Tesla might look like the future, only the Tahoe is paying to fix that pothole waiting for you on the next block. And fixing this situation will come down to how much pain we're all willing to live with.

James Creech is a lifelong car enthusiast and tax attorney based in San Francisco. You can find him on Twitter at @jcreech3.