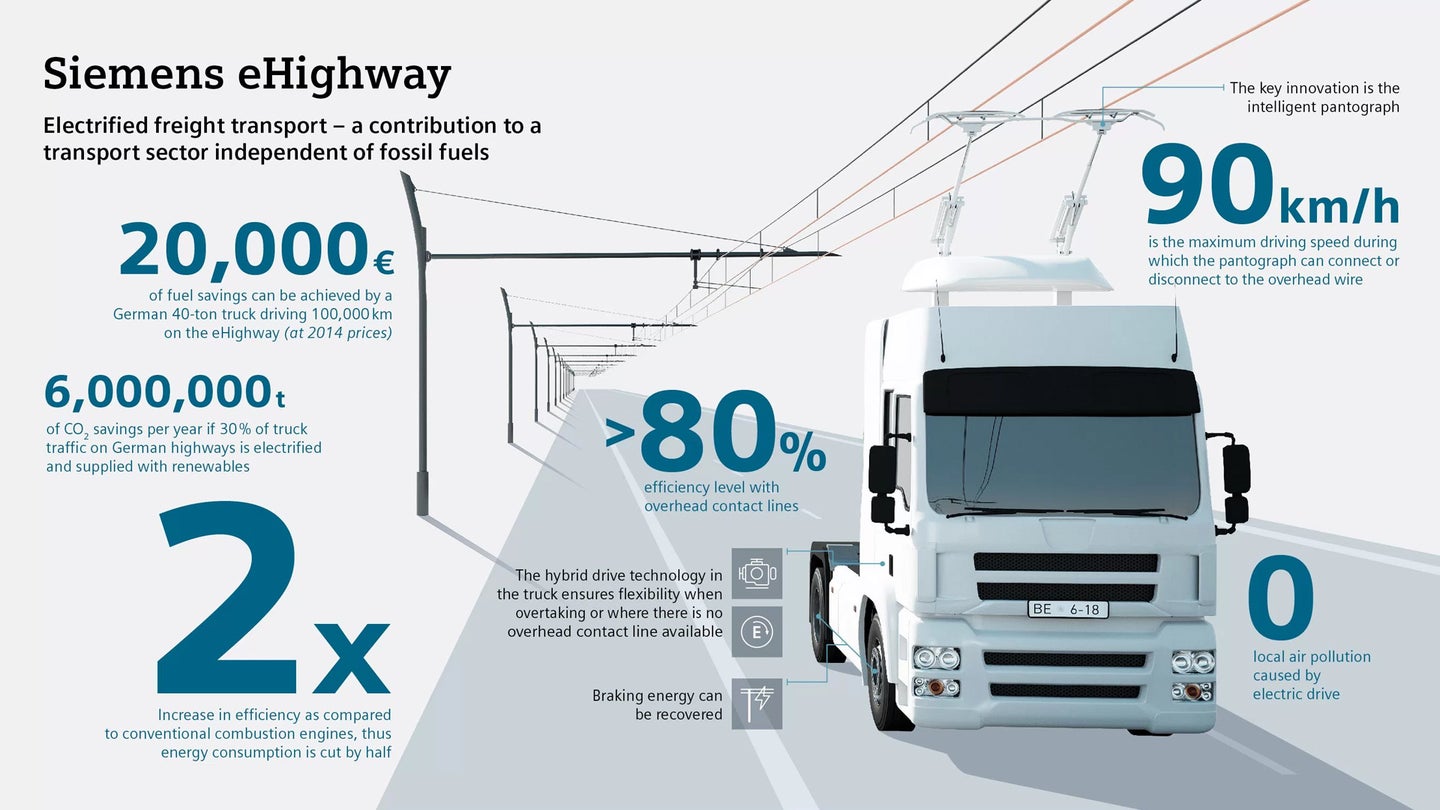 In case your forgot, Elon Musk is threatening to disrupt the trucking industry with the introduction of the Tesla electric semi truck. But in order to power all of those Model 3 motors, it will need a lot of juice, and even more time to charge. Thankfully, some countries like Germany have been testing charging while vehicles are in motion and they're ready to move forward with implementing it more widely.

Deemed the eHighway, the project exists thanks to a partnership between the German government and Siemens. Given the success and affordability of the project in other countries like Sweden, German officials have decided to move forward with an implementation spanning 10 kilometers (or 6.2 miles) on the Autobahn.

Siemens has been commissioned by the German state of Hesse to build an overhead contact line for electrified freight transport on a ten-kilometer stretch of autobahn. With this field trial, the eHighway will be tested on a public highway in Germany for the first time. The system will be installed on the A5 federal autobahn between the Zeppelinheim/Cargo City Süd interchange at the Frankfurt Airport and the Darmstadt/Weiterstadt interchange.

Though six miles might seem like a significant distance, it's not much for charging. A truck traveling at the 56 mph speed limit Siemens has set for the system would only get about nine minutes of charging time. Considering even Tesla's Supercharger only provides around 1.7 kWh per minute of charging, these would either need to provide substantially more charging or would have to extend much further than the distance planned.

If the project continues to grow, the roads of Germany may experience an unintended consequence—traffic could be somewhat relieved over time. This is thanks to a designated lane promoted to be used for the electric trucks. Combined with their eventual overtaking of traditional fossil-fuel powered trucks on the road, this is a reason for heavier and slower trucks to stay in the far lane where they are able to charge while on the move. Though no statistics are readily available for Germany, some sources report that trucks could be responsible for up to 20% of traffic in the United States.

Several other implementations of Siemens' solutions have been in place elsewhere throughout the world. So far, the infrastructure seems to outweigh the current vehicle availability, especially since this technology appears to be proprietary in nature and no other manufacturers are developing support publicly for it at this time. But if it's adopted more widely, this charging method may be preferred to keep trucks on the road longer.