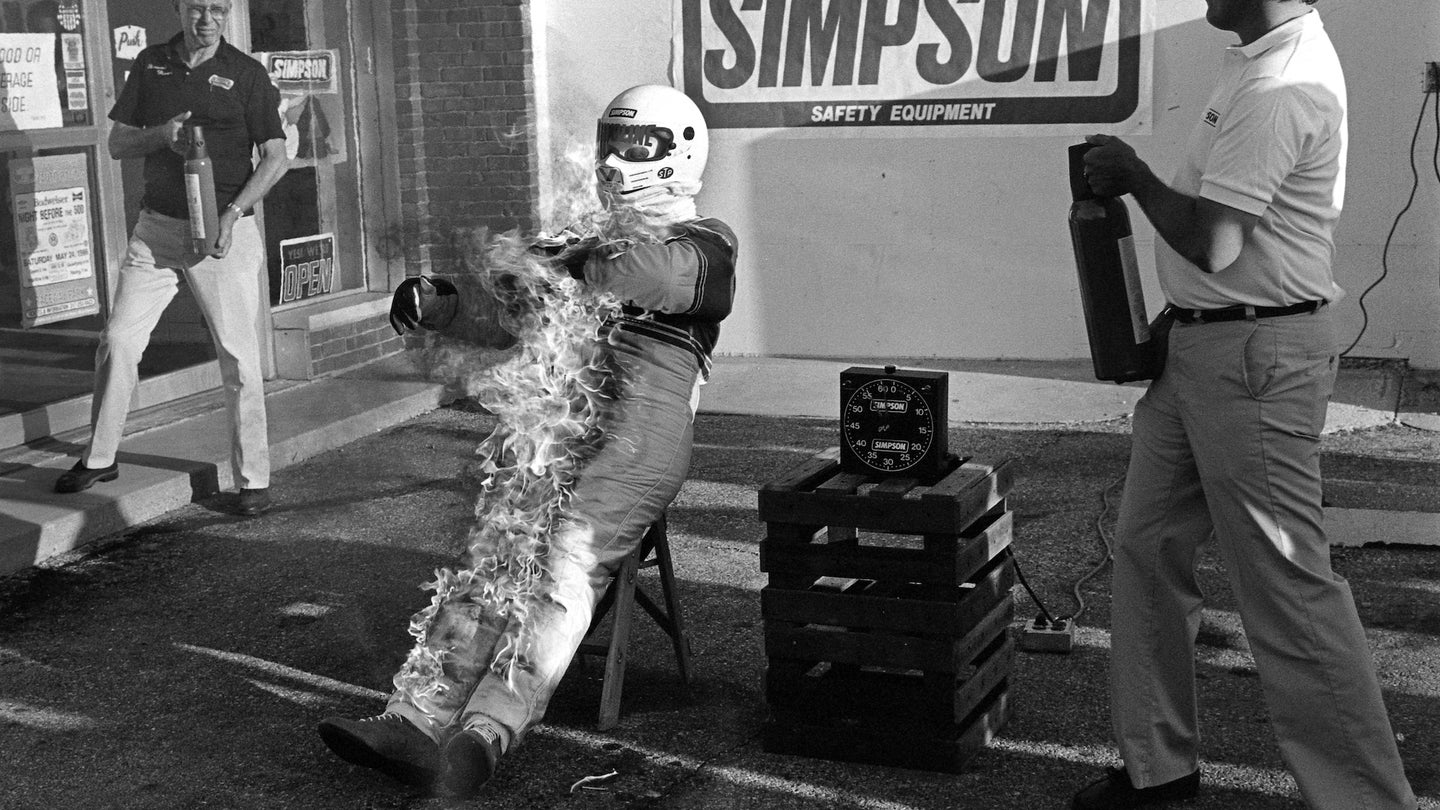 ​After suffering a stroke last Friday, 79-year-old EJ "Bill" Simpson departed this world. His name isn't one that'll ring many bells for non-racing fans, but it ought to be, because Simpson's contributions to the motorsport world have saved thousands of lives, and will save thousands more yet.

Orphaned as a boy, Simpson in his teens fought his way into drag racing, where he suffered a serious accident at age 18 in 1958. Breaking both arms in a crash, a sidelined Simpson toyed with ideas for preventing more accidents like his, and he settled on a novel solution: Parachutes. Early testing didn't go well—Simpson and an accomplice were arrested after sending a Chevy station wagon airborne at 100 mph and crashing into a tree nursery—but the company that eventually became racing safety gear giant Simpson Performance Products was born, and it had yet to introduce its greatest hit.

Simpson branched out into driver safety gear in the early 1960s, and while working with NASA on astronauts' umbilical cords, a contact introduced him to a fire-resistant fabric called Nomex. All too familiar with the risks of fire in racing, Simpson turned the material into racing suits that were an instant hit, in part due to Simpson's flashy product demonstrations, which involved setting himself on fire. While Simpson could've coasted on his company's success from there, he didn't; he clawed his way into IndyCar, where he made a respectable career for himself, with a career-best finish of sixth at the Milwaukee Mile in 1970.

The greatest challenge of Simpson's life, however, didn't arrive until 2001, when NASCAR legend Dale Earnhardt was killed in a crash, and NASCAR itself blamed Earnhardt's Simpson-supplied belts for the fatality. Fans sent death threats (and even bullets) Simpson's way, and the former racer was forced to step down from the company he founded to take NASCAR to court for dragging his name through the mud. Simpson, the gritty sonofa, made NASCAR tap out, and walked away with a settlement thought to be in the neighborhood of several million dollars.

Simpson was inducted in 2003 to the Motorsports Hall of Fame of America, but that doesn't quite feel like an adequate tribute to a man who gave up racing to keep others' lives safe on track. We'll admit that we didn't know the history of Nomex in racing before hearing of Simpson's passing, but now that we do, we'll say some words of thanks every time we zip up before going out on track. It's the least we can do for a man who found a way to look after us from beyond the grave.