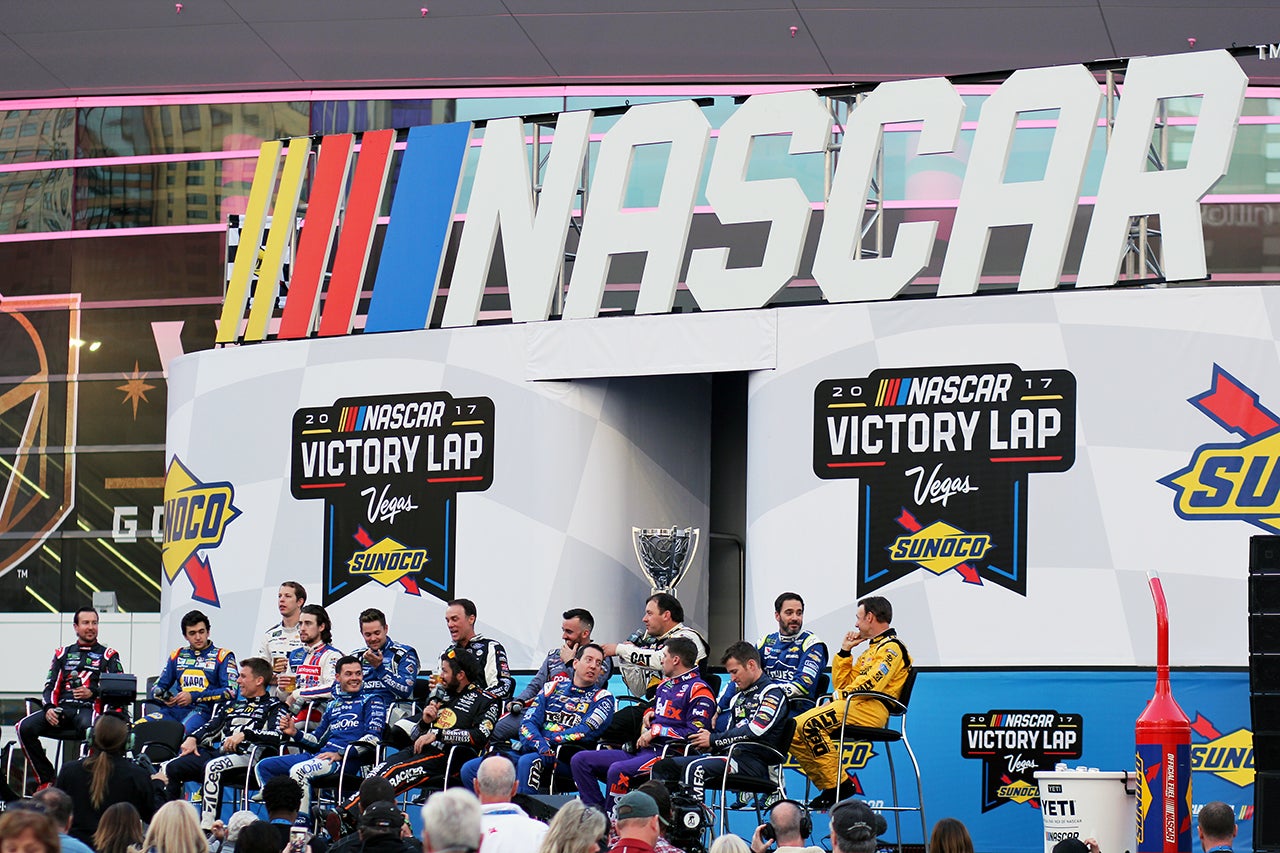 With the conclusion of the 2017 Monster Energy NASCAR Cup season a few weeks ago, NASCAR headed to Las Vegas to celebrate the season that was. Known as Champion’s Week, NASCAR set up shop in Las Vegas for a week of memorable moments including autograph sessions, driver appearances, and two notable award ceremonies honoring everyone—from Martin Truex Jr., NASCAR’s newest champ, to Dale Earnhardt Jr., who received the Most Popular Driver Award for the 15th straight year.

All 16 NASCAR Cup playoff drivers plus NASCAR’s newest Cup Series Rookie of the Year were on hand to answer all sorts of questions on everything, from on-track driver feuds to their thoughts on NASCAR’s new rules for the 2018 season. Most NASCAR drivers are never at a loss for words when it comes to speaking with the media. While some drivers let their colorful personalities shine a bit more than others, there are many drivers that can’t help but be themselves. Below, then are the drivers' answers to my questions on a wide variety of topics—including the one very simple question I asked 2003 NASCAR Cup champion Matt Kenseth, who is without a full-time NASCAR Cup ride for 2018.

Kyle Busch on balancing the emotions of being one of four relevant drivers in the last race, but finishing so close and bring what he would describe as a failure

Kyle Busch: It's tough. It's hard, you know. You look at going to Homestead-Miami and being a part of the final four and only wanting to win and that's the only thing that you care about and everything else is just a failure, you know, so, it's disheartening, it's disappointing, I mean, all the analogies you can make up for that. But in all retrospect, we gotta go focus on what's ahead in 2018 and try to make sure that we're better than what we were this year to not let that same failure happen again.

Matt Kenseth on if he could have done anything differently, and if there was a pivotal point in the season that he would like to do over or improve.

Matt Kenseth: I think we could improve the whole season. I mean, I think that, you know, you look at every race weekend, at times you look at every lap and see things you probably could do a little bit better so I would say most of the year was an extremely frustrating year. You know, ever since probably Phoenix in '16 all the way until Phoenix in '17 was extremely frustrating. We had a lot of opportunities to go run better or possibly even win if we did everything right--just didn't really done until Phoenix, so, like I said, I am glad we were able to get that win late, but it was definitely a frustrating season, just hard to finish them off for some reason.

My one question to Kenseth: "How would you want people to remember you as a driver?"

Chase Elliott shares his thoughts on the new look for Hendrick Motorsports next year, having a different car number, and William Byron coming on board

Chase Elliott: It's gonna be different, for sure. I think that goes without being said but you know, again, I think the guys that are coming, with Alex and William, they've proven that they know how to race and they don't need any help to be good race car drivers everyone won races and be contenders, I have no doubt. Alex proved that last year. He proved it again in just a couple of Xfinity starts he had this season, so you give that guy what he needs to go fast, he's gonna go fast and, obviously, William, that being said too, with the run he made this year to win that championship was impressive. I think they surprised a lot of people. I don't think people expected them to go and do that and I love seeing them prove people wrong. As a racer, there's nothing better than proving people wrong and I definitely commend them for doing a great job this year and I think that he's gonna be a good teammate.

Ryan Newman discusses how tough is it to win races

Ryan Newman: It's really tough. It's way tougher than it used to be, especially now. I think the alliances and organizations and teams and car owners that, you know, if you miss it by just a little bit, you're not third; you're maybe first amongst your group, and seventh overall. And you see that with the Toyotas, with the Fords, and even Chevrolets, but it seemed like more often than not this year, the Toyotas and Fords represented well in Champions Week or the Final Four so they were the ones ahead together when it counted the most.

Kyle Busch on his expectations that Chevy is coming out strong, and being competitive next season

Kyle Busch: You know, you look at the SHR [Stewart-Haas Racing] guys and they kind of struggled a little bit with the build of their Ford and trying to figure out what was going on with it. They kind of tried things that they knew worked on a Chevy and it was the exact opposite of what they thought it would be for the Ford body. So, it just depends on what the body build is like and what kind of happens and goes on in their research and development and making their cars better but I would predict that, obviously, when you have a model change, it's supposed to be better than the current model you have so they should come out of the box just fine.

Martin Truex Jr. talks vindication for last year and the heartbreak he experienced at Talladega

Martin Truex Jr: I think it is, you know, I think part of that is kind of what we fed on this year. Went into the season thinking, like, how do we make sure this doesn't happen again, you know, some of us racing luck, which you know, that's kind of a fickle thing. But, building on in the last couple of years, I feel like ever since this team got together, all of us, this four group of guys, it's just the way Cole leads his team and the things we've been trying to work on and the way we raced, its just...it's been so much fun to be honest with you. No matter how it turned out this year, I felt like we had an unbelievable season. We continue to get better and stronger, and just excited about what we'll do in the future. So, some days the racetrack don't go the way you want them to--and certainly, last year was one of those--but I felt we had a lot to be proud of. We build on...we really build on the success we had in 2015 last year and if we just continue to elevate the program and have fun doing it, it's gonna be an awesome ride.

Austin Dillon: I tweeted the other day about it 'cause I spent a full day in our pit department on Tuesday and half day Wednesday when they...that's when they kind of started on everything Monday and I had an absolute blast working with the guys, and I think you're gonna see a really cool, positive thing for pit crews. I think you're gonna have four guys that are out there that are gonna have to be working as one and it's really made all the guys have to be athletes. I mean, they are doing a lot, and there's gonna be guys getting tired because the amount of work that they're putting in in that amount of time, I mean, it is impressive.

As far as uncontrolled tires and safety, I think it's all gonna be fun when it comes to that. I think they are going to be mistakes made but it's all gonna play into it. The teams that make less mistakes are really gonna thrive in this. It's not gonna be necessarily about the fastest pit stop—it's gonna be about the guys that are most consistent and get it done under pressure.

Green flag stops, I think you're going to see more two-tire stops just to take away air 'cause it's a lot going on in that period of stop. So, I think when you get to Daytona, you're gonna see guys doing 13-second stops by the time we get there, maybe a little less than that. I’m really pumped about it because, man, the athleticism that I saw in the pit stop was so cool. It was poetry in motion, I mean, it was awesome to watch and be a part of. And there's gonna be a lot of teams that you're gonna see show up, see different styles, and throughout the season try and hold to that. I think people are trying to be quiet about what they're doing and how they're going about it. We've got two or three different ways that we're trying to work right now and we're still finding speed and that's only two days in, so by the time we get to Daytona, it might be a whole new process of how we do things and it was just fun to watch. Some of those guys were really confused on it, and some guys were just beasts right off the bat, you could tell.

Truex Jr. on the last three seasons being unlike anything else in his career and what's the big difference

Truex Jr: Just people, man, you know, it's the right situation, the right people around me, you know, a situation where we can just stay together and continue to build on the program without team changes and big things happening that are bad, you know. I felt like earlier in my career, it seemed like every time we started to gain some traction and get that momentum going, something, a big change would come or, you know, something would change that would take that momentum away and that performance away. So just to consistently build together with this group and be with Toyota and all they put into the program and the Joe Gibbs relationship, the alliance we have with JGR, all those things just kind of keep us on the cutting-edge of the sport on the performance side has been huge so, just try to keep it rolling.