NASCAR's flagwavers were out in force this weekend, despite Dale Earnhardt Jr.'s support of kneeling NFLers. 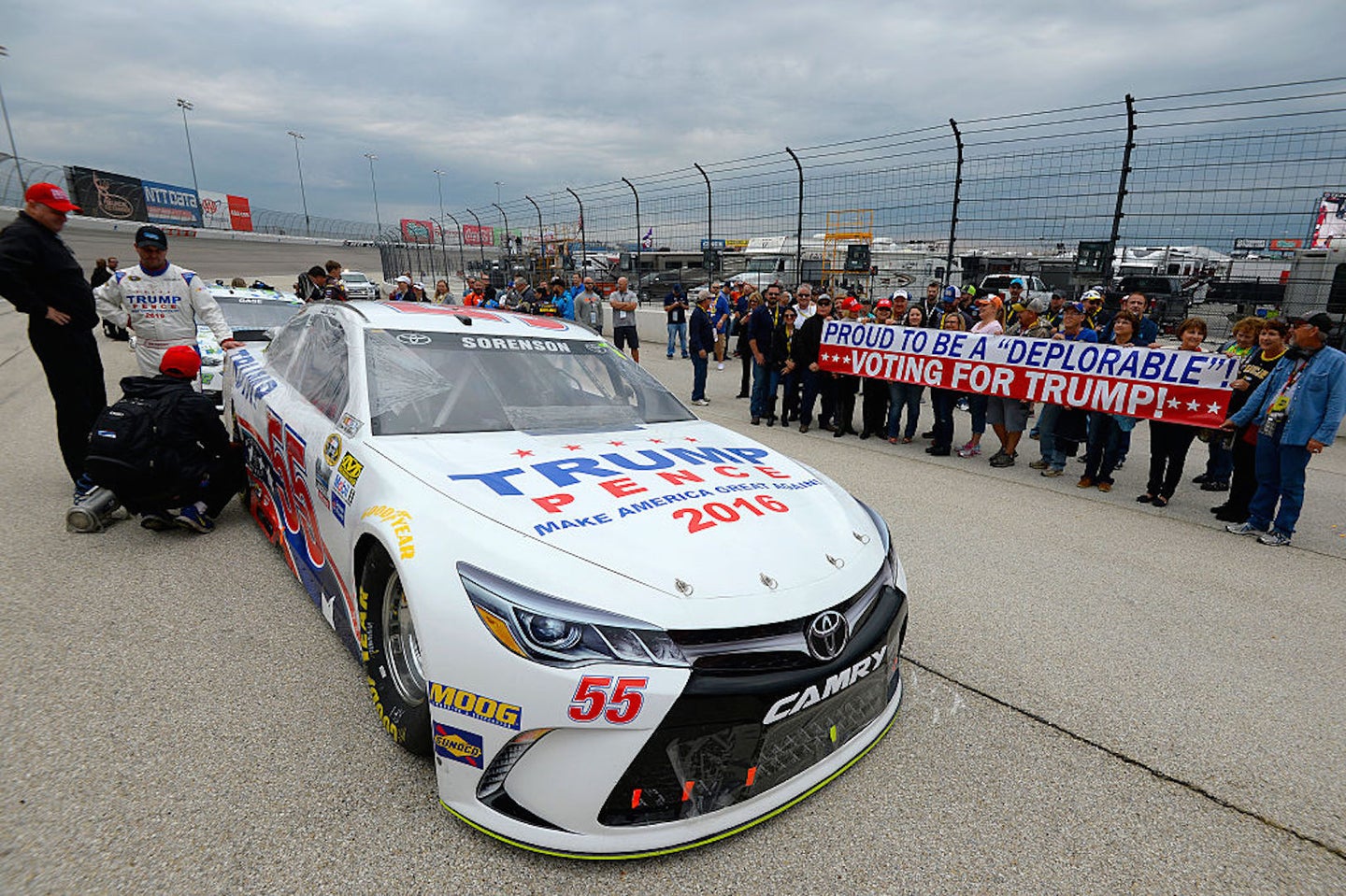 In the midst of Donald Trump's week-long (and counting) tirade against disloyal athletes in the NFL, cowboy clothes-wearing NASCAR icon Richard Petty threatened to fire anyone who protested during the national anthem at a NASCAR race. Sure enough, during this weekend's sparsely attended Monster Energy Cup race in New Hampshire this weekend, unwavering patriotism won.

With nothing else on his to-do list, Trump has undertaken a campaign to cleanse professional sports of disloyal athletes and owners, who have been kneeling during—or even opting out of—the pre-game national anthem. Most in the NFL have been vocally supportive of people who choose to protest. Trump trumpeter Rex Ryan expressed his dismay of Donald on TV. Even Robert Kraft, the Patriot's owner and famous F.O.D. (Friend of Donald), sounded off by issuing an statement of support of his players and of the concept of free speech and assembly.

It must have really annoyed Trump to see his old pals turning on him as he was on this very important crusade to protect our country from protesting athletes. In a weekend-long twitter rant, he lambasted the NFL for poor ratings and declining attendance.

Trump is wrong about NFL's ratings and attendance—or at least, he cherry-picks the numbers to arrive at the conclusion that most easily supports his policies—I mean, his tweets. According to Politifact's assessment of the veracity of the above tweet, "Ratings were down 8 percent in 2016, but experts said the drop was modest and in line with general ratings for the sports industry. The NFL remains the most watched televised sports event in the United States."

So Trump turned to NASCAR nation for support. That all-American Sunday spectacle of high-speed left turns has always attracted a flag-waving type of demographic—the dusty-boots wearing family-lovin' folks who jam out to Keith Urban and revere rural values—an Applebee's crowd in American cars who can only smh those Yankee elites. At least, that's the image NASCAR wants to project.

Either way, Trump latched onto Sunday money. And sure enough, at the Monster Energy Cup race in New Hampshire, none of the drivers knelt down on the steaming asphalt on pit lane in an expression of hatred against America. And Trump was watching.

What seems to have eluded Trump is the fact that NASCAR race attendance and TV ratings are actually in a much steeper nosedive than the NFL's.

Richard Petty may be known as "The King," but he's actually not a royalist. He's a lover of Democracy (and presumably a Republican one at that). Petty is one of NASCAR's most successful drivers and team owners, and remains a spectral figure at races, wearing flamboyant cowboy clothes and Oakley wraparounds. Petty set the tone earlier in the week when he publicly threatened to fire anyone who dared express anything other than trackside patriotism.

The thing is, the true heart of NASCAR is closer to Dale Earnhardt Jr. than it is to Richard Petty. Junior is talented, rational, reasonable, and surprisingly well-spoken. Over the course of his long career, he has managed to remain NASCAR's single most popular driver as well as its most thoughtful. His response to Trump and Petty's brainless jingoism is enough to make us forget that NASCAR's attendance has been in a freefall for nearly a decade.

We can only hope that after Junior's retirement from driving this fall, he'll take on an even larger role as a NASCAR ambassador. With guys like Petty out there, the sport sorely needs it.