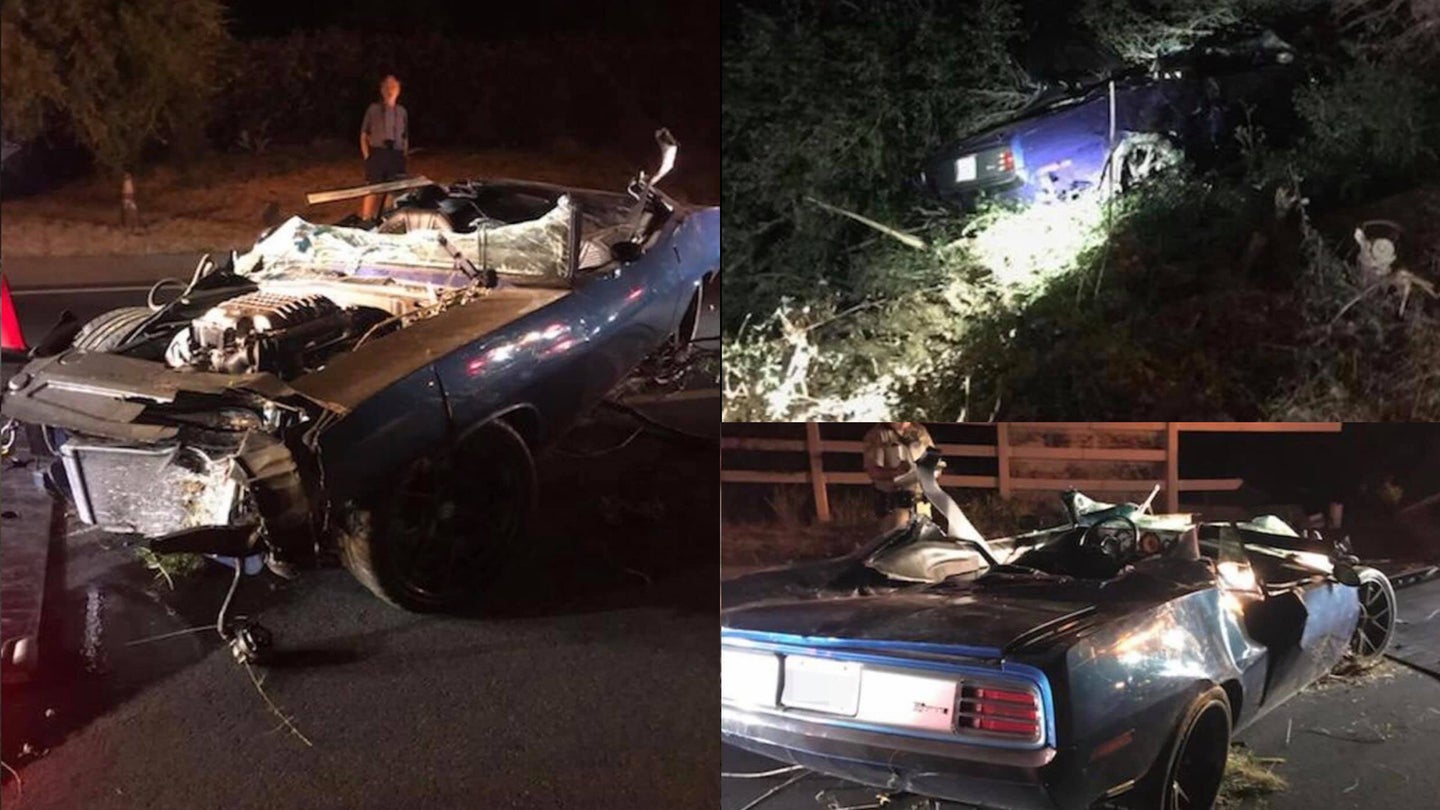 Actor and comedian Kevin Hart continues to recover from the violent car crash in early September that left him with "serious" back injuries, and over a month later, Associated Press reports California Highway Patrol investigators have finally issued their report on the accident. Officials determined the driver of Hart's Hellcat-swapped 1970 Plymouth Barracuda restomod lost control after absolutely mashing it—er, "accelerating recklessly"—from a stop.

Police say a friend of Hart's named Jared Black was behind the wheel with Hart and Black's fiancee as passengers in the classic muscle car when the trio pulled onto a darkened Mulholland Highway in Malibu early in the morning on September 1. As he completed the turn, like so many Cars & Coffee exits gone awry, Black allegedly punched the throttle and lost his handle on those 720 supercharged horses.

What happened next wasn't pretty: "The car crossed the oncoming lane of the two-lane highway and went down the steep embankment, knocking down a vinyl fence before hitting the tree head-on." The impact also caused the downward-angled car to lift up and slam roof-first into the tree trunk, further crushing the cabin and actually uprooting the tree. Hart was able to extricate himself from the wreckage and quickly left the scene with his private security team; Black and his fiancee Rebecca Broxterman were trapped and had to be rescued by first responders, who ended up cutting off the Barracuda's roof to get them out.

In addition to the reckless driving, police believe none of the occupants were wearing seatbelts. Not that it would have mattered much—other photos of the car suggest it's outfitted with simple lap belts despite having a custom interior with modern bucket seats. It was also reportedly not equipped with anti-lock brakes.

As California Highway Patrol disassembled the vehicle over the last month as part of their investigation, there's been speculation that Hart’s high-profile wreck would cause California to rethink its murky laws concerning modified classic cars. Hart’s 1970 Plymouth Barracuda was modified by Speedkore, which in addition to slotting in a 6.4-liter Hemi V8 and a 2.9-liter supercharger also outfitted better wheels, tires, brakes, and a host of carbon-fiber panels to bring the weight down and the performance up for the ‘Cuda.

Speaking with TMZ, Hart’s wife Eniko said that the actor is “going to be just fine," though he faces at least a few more months of physical rehabilitation to get back to normal following his back surgery. Black is also still recovering from his unspecified injuries, while Broxterman was mostly unscathed. Hart reportedly has "nothing but love" for Black despite everything.