A V-10-powered, desert blasting, balloon-tire wearing Lamborghini? Sign us up! 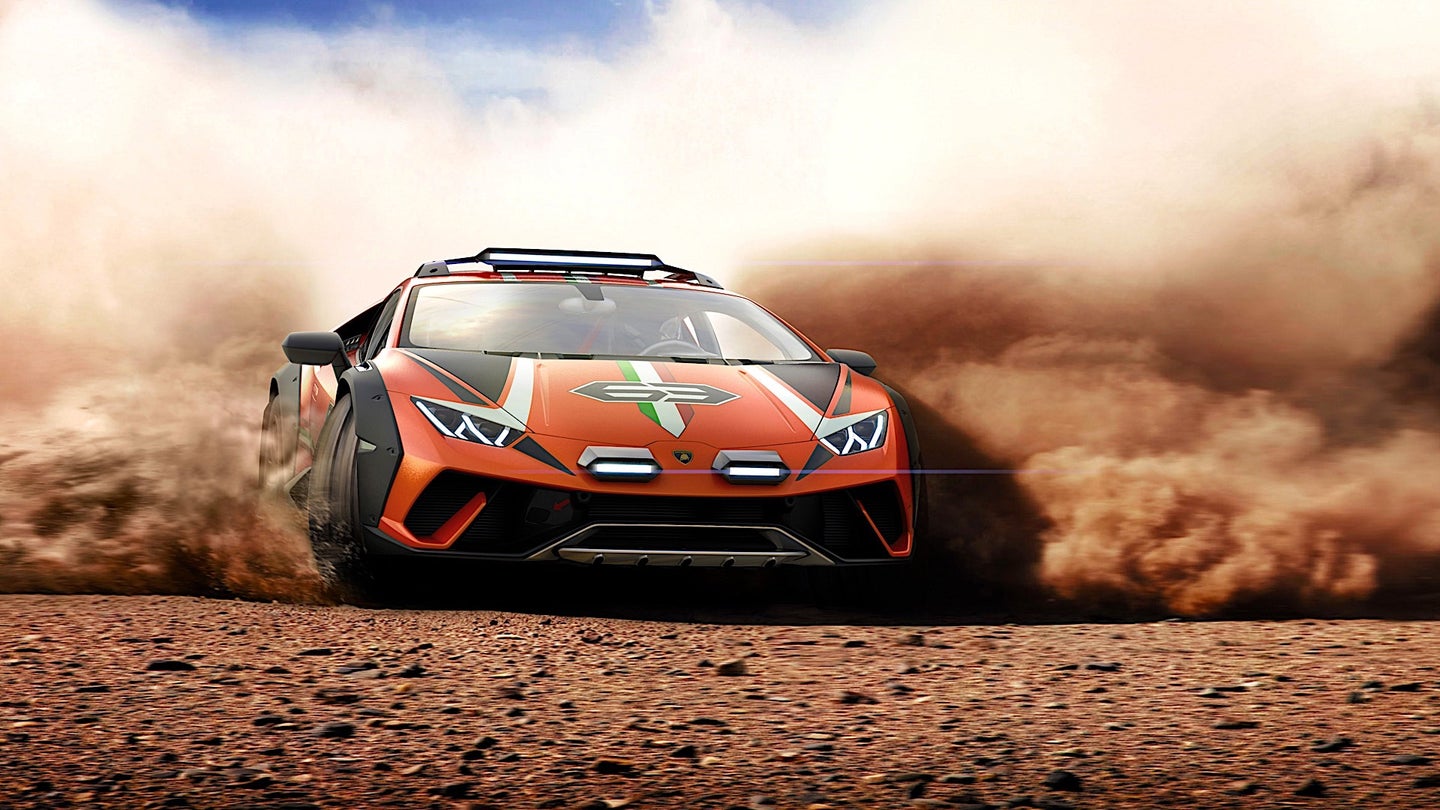 If someone told you that Lamborghini built an off-road focused car, you'd likely think that it would be based on the company's new Urus SUV. But the concept isn't built on the bonkers-yet-practical Urus. In fact, underneath the off-road cladding, the supercar is 100-percent a Huracán Evo that's been beefed up for rally duty. Called the Sterrato, it's only a concept for now, but hopefully Lamborghini puts it into production.

Starting life as a Huracán Evo, the Sterrato is powered by the Evo's 5.2-liter naturally-aspirated V-10 making 640 horsepower and 442 lb-ft of torque. Lamborghini's Lamborghini Dinamic Veicolo Intergrata (LDVI) onboard computer controls all the vehicle's systems, including the all-wheel-drive unit. Calibrated for off-road use, rear-wheel drive behavior is improved and provides more torque during oversteering maneuvers.

It's 47 millimeters taller than the Huracán Evo, with a 1% improvement in approach angle and 6.5% improvement in departure angle. Balloon tires are fitted to 20-inch wheels on a 30 millimeter wider track, improving off-road traction. The tires themselves are specially designed to be highly damage resistant and feature open shoulder blocks to help keep the tires clear from mud and debris.

A rear skid plate also acts as a diffuser, and the Sterrato's underside has an aluminum skid plate and reinforcements. The side skirts are also reinforced. Composite bodywork around the engine and air intakes help protect against debris, and mudguards were created from carbon fiber and elastomeric resin. The last thing you want is a rock puncturing one of the delicate V-10 engine components.

No off-road vehicle would be complete, Lamborghini or not, without the mandatory LED lightbar. A main LED lightbar was mounted to the roof, while two hood-mounted LED lights function as floods.

“The Huracán Sterrato illustrates Lamborghini’s commitment to being a future shaper: a super sports car with off-road capabilities, the Sterrato demonstrates the Huracán’s versatility and opens the door to yet another benchmark of driving emotion and performance,” said Maurizio Reggiani, Chief Technical Officer of Automobili Lamborghini.

It's difficult for an OEM to produce a factory off-roader that's cooler than the Ford Raptor, but if Lamborghini does decide to put the Sterrato into production, it would have the crown. It's one of the wildest Lamborghinis that has ever existed.