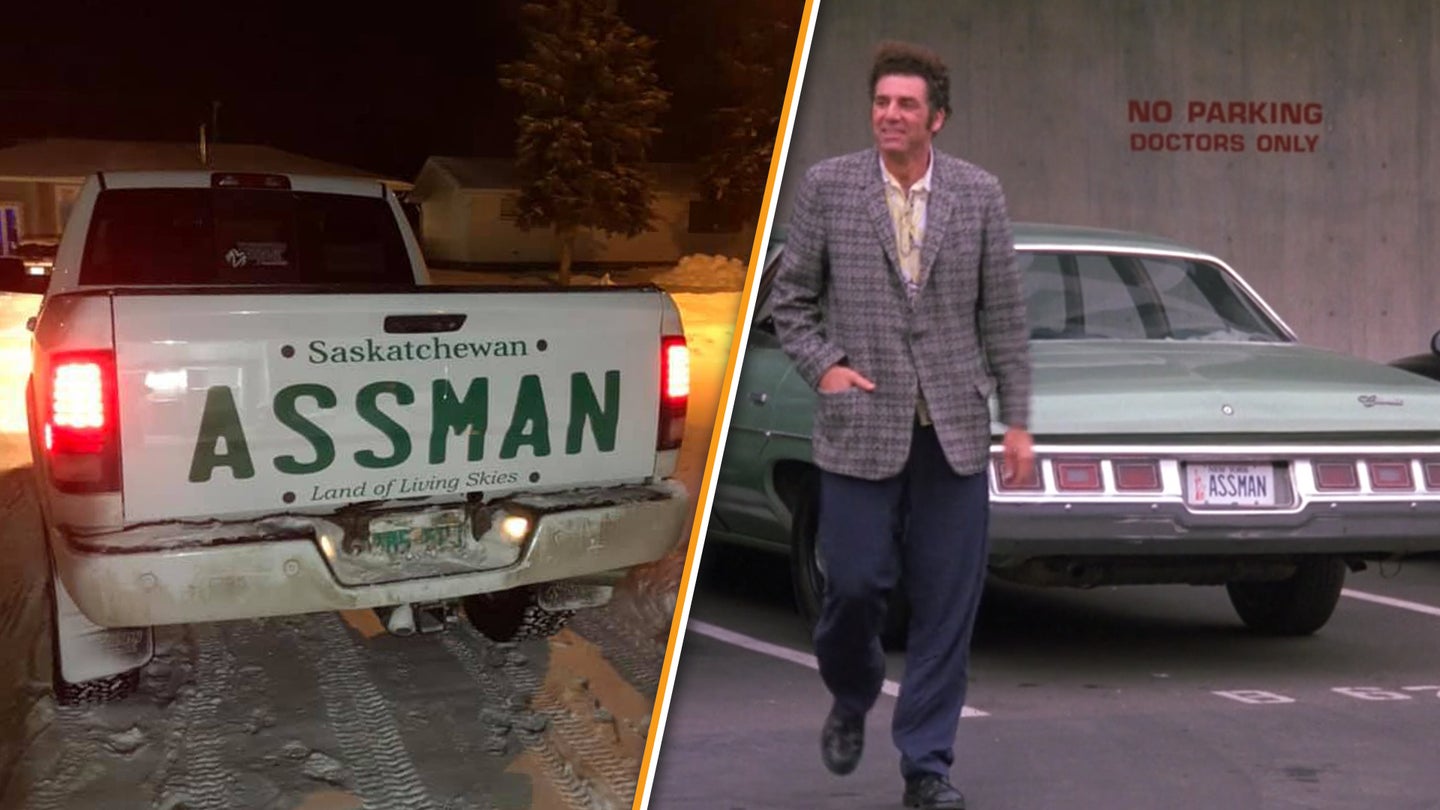 Every superhero needs something to fight for, whether it's protecting their homeland or safeguarding the known universe. But Assman—that's David Assman, resident of Saskatchewan, Canada—stands for the right to be who we are, and he's gaining worldwide attention for slapping his last name across the tailgate of his Ram pickup after local bureaucrats denied his request for a vanity license plate.

Assman spoke to the National Post after taking his long-running fight with Saskatchewan Government Insurance to the streets. Since the mid-1990s, the agency, which administers license plates for the province, has repeatedly rejected his applications for a vanity plate bearing his surname. The proctologist on Seinfeld had an easier time with the New York DMV, apparently.

SGI turned down his most recent attempt in January, claiming it was "offensive, suggestive or not in good taste." Assman was fed up. He appealed—and like any good hero, he also had a Plan B. So when SGI handed down their inevitable second rejection last week, Assman pulled the cover off his coup de grace: a tailgate-sized decal of the very vanity plate they refused to grant him.

"See, I hate to say it but I’m kinda a sarcastic ass and well I just wanted to go big!" he said to the National Post.

It's a brilliant illusion, with everything from the province name and motto to the customary bolt holes for mounting reproduced writ large. Not much authorities can do here; there's obviously nothing illegal about putting your name on your car. And if there was any doubt that Assman won this war, SGI conceded in a tweet on Wednesday.

He'd probably still like a license plate, but the decal's friendly f*** you manner is a solid consolation prize. The National Post also published a list of every rejected plate request in Saskatchewan, which is worth a read in full.

"I know there are a few people out there that are wondering why I’m making such a big deal about getting denied my last name as my license plate... As I told one reporter there are too many snowflakes out there that get their feelings hurt about nothing!" Assman wrote on Facebook. "People need to learn to suck it up once in a while, just because you don’t like or feel something is inappropriate, you don’t have to make a big deal about it! If it isn’t illegal or going to harm someone mind your own business and carry on with your own life! Oh yea also because I have 3 weeks off and nothing planned so I need something to occupy my time!"

Assman—it's pronounced Oss-men, by the way—didn't decide to be a hero. He was born one. Also, he had a lot of free time. So the next time your questionable vanity plate request squeaks by, remember: You know who to thank.