A Porsche Cayenne and Ferrari 458 were directly involved in the fatal head-on collision. 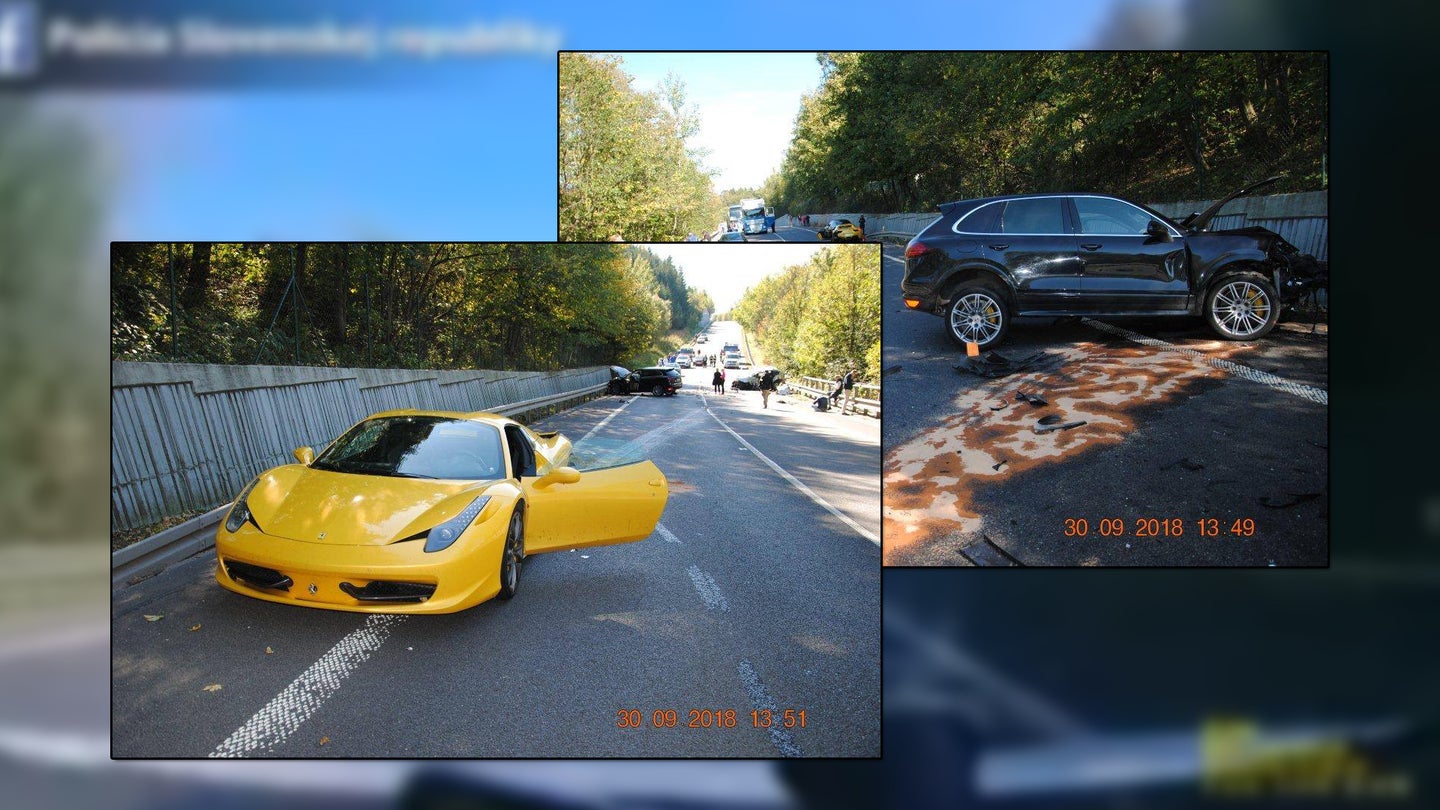 On Sept. 30, a tragic accident caught on a dashboard camera claimed the life of a Slovakian man after a group of high-dollar cars took their vehicles racing on the streets. A Porsche Cayenne struck a Skoda Fabia head-on while racing with a Ferrari 458 and Mercedes AMG. The crash resulted in the death of the 57-year-old man behind the wheel of the Fabia. His wife, who required surgery as a result of the accident, and 21-year-old son were also in the car when the accident occurred.

WARNING: The YouTube video contains the exact moment of the deadly crash.

The accident occurred near the Northern Slovakian town of Dolny Kubin, about 25 miles from the Polish border where the cars were said to have been cruising with another group of high-horsepower and luxury cars they had linked up with at an earlier Cars and Coffee event, according to social media posts.

The AMG can be seen illegally passing the row of vehicles in an oncoming traffic lane. Shortly afterward, the Ferrari can be seen with the Cayenne following closely behind. At the last minute, the Ferrari can be seen attempting to merge over to avoid the oncoming traffic. The following distance of the Porsche SUV created a problem for the pair; resulting in the Cayenne striking the 458 before colliding head-first with the Skoda.

According to police, the average speed of the vehicles was around 135 mph prior to the crash.

The black Mercedes AMG was driven by 26-yeard old Lukasz Kaminski, who is a Polish auto journalist and organizer of a popular Cars and Coffee event. According to local news, Kaminski had originally paid a $173 fine (150 euros) and his matter was considered to be settled.

Several days later, prosecutors announced that the investigation into Kaminski would continue. Kaminski has since deleted his Instagram profile, however, cached websites show his username mentioned in photos of the Ferrari 458 which was involved in the accident. The driver of the Ferrari, 27-year-old Adam Szczublinski, reportedly had a $23,000 (20,000 euro) bail posted by his mother which was later rescinded. Both could face 10 to 15 years behind bars if convicted.

The Porsche Cayenne that struck the Skoda and resulted in the death of its driver was driven by 42-year old Marcin Laskowski. Local media outlets state that Laskowski remained behind bars earlier this month and is threatened with 15 to 20 years in prison.

A polish website that tracks the reputation of registration plates currently rank the numbers of the Ferrari and Porsche, respectively, as the two worst drivers. The Mercedes ranks sixth.

Only you can prevent forest fires by not stunting like a fool.