"Patron states that collector told him to [expletive] his mother then a rock was thrown at his car." 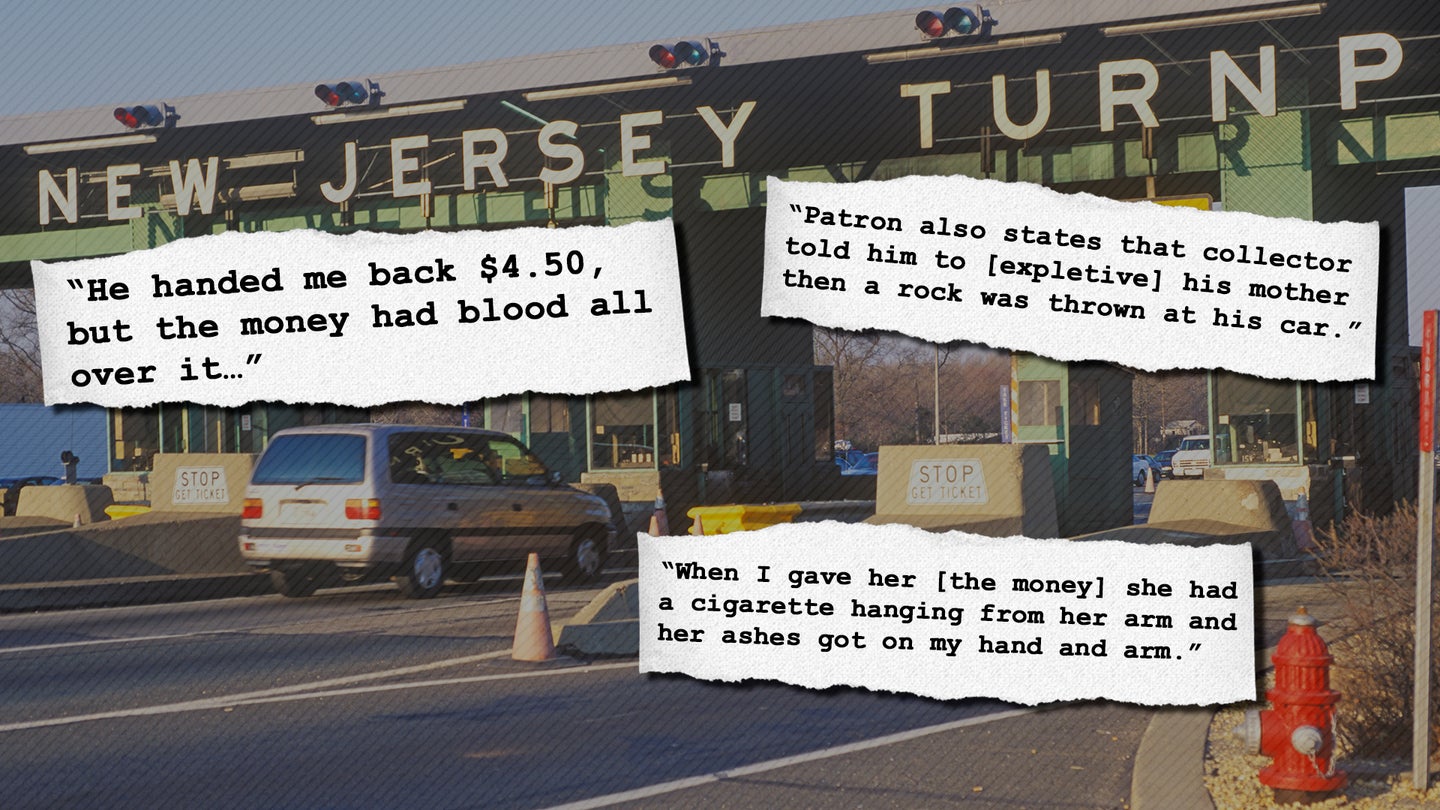 Being a toll collector is a pretty thankless job—that much we understand. But these real-life complaints from drivers about toll collectors in New Jersey, sourced from public records by NBC New York, show just how rough it can get out there on the highways the Garden State.

New Jersey gets a bad rap—it can really be quite lovely—but it remains true that traversing the state's infamous Turnpike is generally a miserable experience. The toll collectors probably aren't having any more fun than the drivers, but there's still no excuse for the kinds of things being reported by drivers. NBC New York reviewed over 780 complaints filed by people over bad behavior in the toll booth since 2015 and found reports covering everything from smoking to swearing to threats of physical violence.

"I proceeded to drive through the cash/receipts lane and handed the toll collector a $5 bill. He handed me back $4.50, but the money had blood all over it…[he] asked another employee to exchange the money that was given to me with clean money. When I got to my destination and went to use the money, I noticed that one of the dollars was the same dollar that was given to me with the blood on it. Whomever handled it simply wiped the blood off and gave me back the same money," another driver wrote about their experience on the Garden State Parkway.

And while it's easy to get a grim laugh out of a lot of these situations, some of them are downright mean.

"[Complainant] is handicapped... on Friday, [the collector] dropped the money, told the patron to get out of the car and get the money and they made fun of him with arm movements," another reads.

There are also several reports of racist, sexual, and homophobic comments, including one instance where a toll collector grabbed a woman's arm and told her she needed to sleep with a Puerto Rican man. Aside from the scintillating examples listed above, a majority of the complaints were related to drivers being shortchanged. Most of the collectors named in the reports got off with a warning, though a few were fired as a result.

Given this one-sided view, it would be easy to assume that the problems start and end in the booth. But a toll collector and a New Jersey driver interviewed by NBC New York agreed that it's often the person in the car who makes things worse.

"They’ll come through and throw change at you and go, ‘I shouldn’t have to pay for this because it’s snowing out,’ and I’m like, 'I'm just doing my job,'" toll collector Lisa Daeschler said.

Tom Feeney, a spokesman for the New Jersey Turnpike Authority, told NBC New York that while none of the behavior described in the records can be excused, overall complaints against toll collectors have dropped significantly in recent years, even when you take the rise of cashless tolling into account.