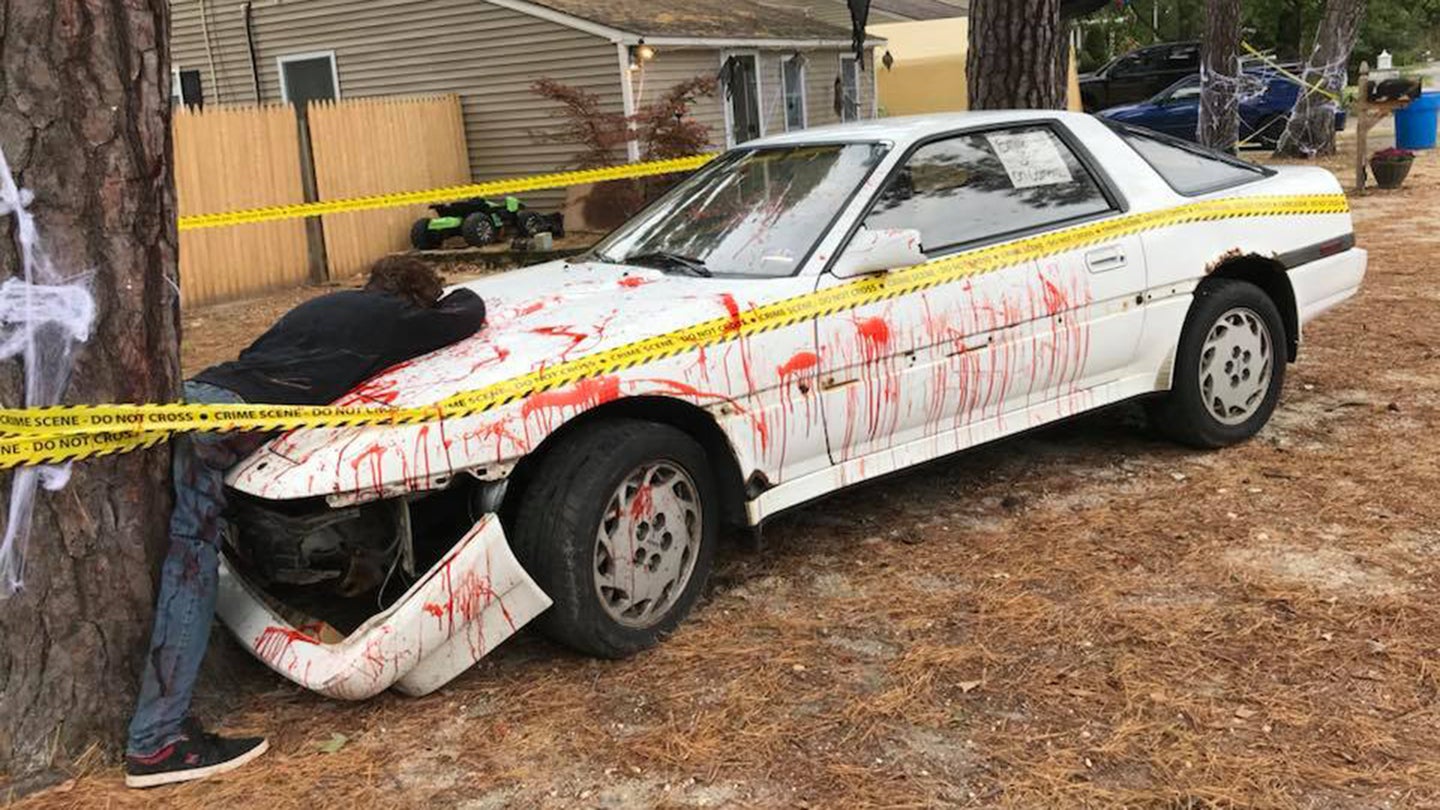 In the wilds of suburbia, there are few subjects as likely to inspire rage between neighbors as holiday-themed lawn displays. For every house with no decorations whatsoever, there's another taking it too far with a literal forest of inflatable creatures. By The Drive's judgment, a bloody car crash scene featuring an Mk. 3 Toyota Supra and a few dead zombies is right on the money for Halloween. Unfortunately, some people seem to disagree.

CBS New York brings us this story of tricks and treats from Waretown, New Jersey, where Krysten and Kevin Negrotto have been deluged with complaints and compliments over their life-size diorama. Using an old A70 Supra and a homemade dummy, the couple staged the scene to make it look like someone had rammed the car into a tree in their front yard to pin a zombie against the trunk. The Supra was smeared with fake blood and surrounded by caution tape, and a sign was attached to the tree explaining the fate of "Zombie Bob."

"Government officials had announced Oyster Creek had leaked into Ocean County's drinking water...there [were] reports of sick and erratic behavior all over our area...Just hours later Bob had fallen ill. He started to foam at the mouth and pace. Next thing we knew we were being chased down the street!" the sign reads. It's all very obviously a Halloween joke.

That is, to some people. Local police told CBS New York they've been "inundated" with complaints over the display, with some saying it looks too much like a drunk driving accident, and that it's too "graphic" for small children. Krysten Negrotto wrote on Facebook that officers even showed up at her door to let her know that people wanted it taken down, though she says the cops acknowledged it was her family's right to keep it up and that they personally found it pretty funny.

After the police visit, the Negrottos doubled down and added a second zombie body. We can understand how such a display could trigger some unpleasant memories for people who have been in bad crashes—but at the same time, Facebook comment threads are full of people who say they've lost someone in a car accident and that the scene doesn't bother them. It's Halloween; you're going to see plenty of things that are theoretically scary for any number of people.

And yes, that includes children. As Negrotto points out, it was actually her 5-year-old son who came up with the Zombie Bob car crash idea, and that he's more excited about the involvement of a Toyota Supra than anything else. See, the kids are all right.

Does This Video Show a ‘Ghost Car’ Appear from Nowhere and Cause an Accident?

The driver was allegedly “impaired by multiple different drug categories.”

Semi-autonomous system has been caught detecting cars that aren’t there.