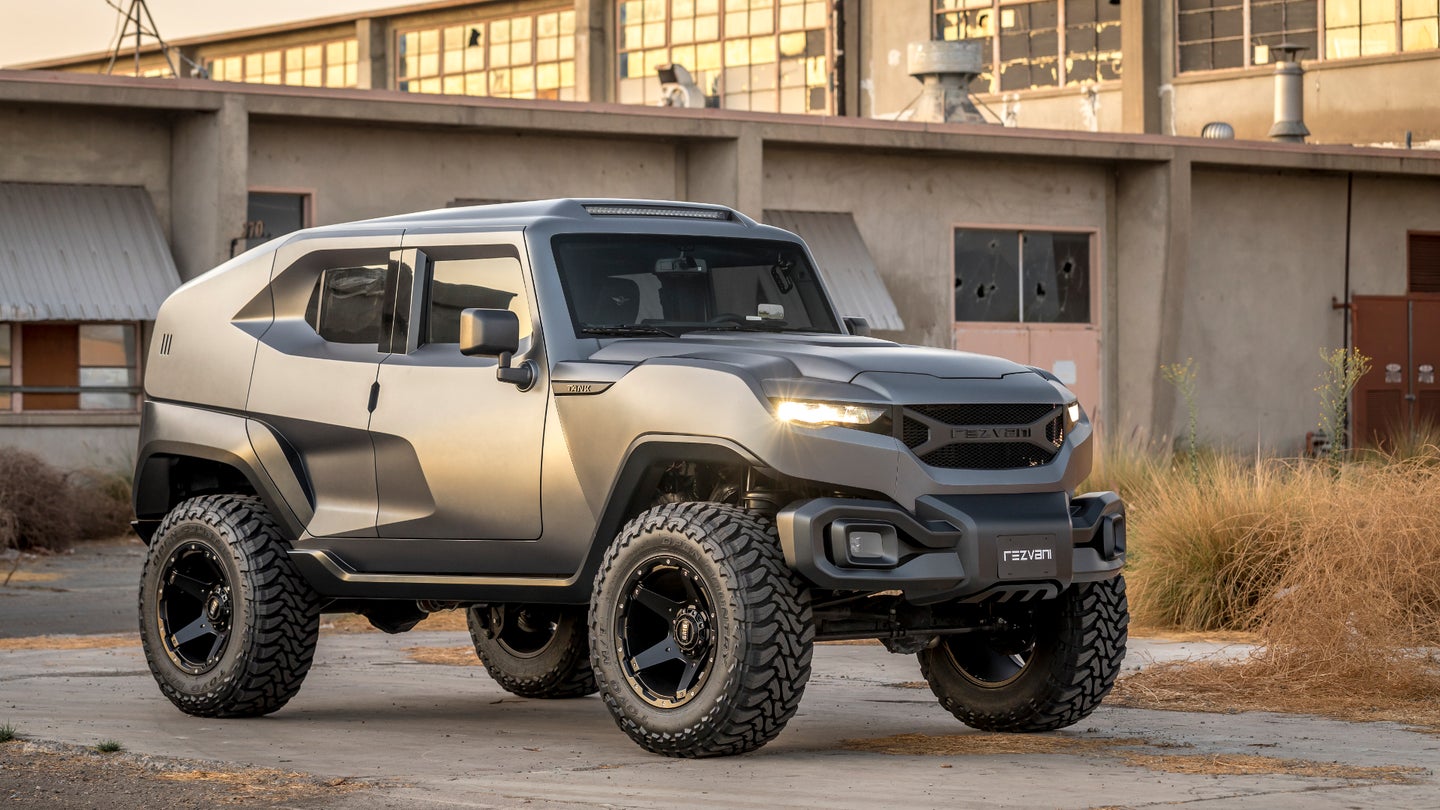 The company's press release claims the Tank is part of a new vehicle category called the XUV, or Xtreme Utility Vehicle. No matter your stance on intentional misspellings, it's hard to come up with a better word for the Tank than that. Much like with USSV and their bonkers Hellcat Rhino XT, Rezvani presumably buys base model Jeep Wranglers and completely tears them down to the frame to build up their custom body—which can be equipped with Kevlar ballistic armor, bulletproof glass, and "military-grade" run-flat tires. Oh, and let's not forget the power-operated suicide doors.

Depending on your persuasion, this is either cheesy sci-fi camp to the max or a dystopian off-roader that might have one day found a home in a Bond villian's garage. The one thing that can't be debated is the Tank's promised all-terrain ability, as two off-road packages add a six-inch lift, knobbly tires, Dynatrac ProRock locking axles, and fancy Fox shocks. After all, it's still a HEMI-swapped Wrangler underneath that Transformers body.

Using the power-retractable running boards, step in through the familiar Wrangler-shaped door openings and you'll see a completely redone interior with hand-stitched leather seats, a suede headliner, and a heads-up display. If that's not enough tech for you, you can spring for a FLIR thermal night vision system that's totally useful for everyday civilians. Again, this is a truck that makes no apologies about what it is and what it represents: Pure excess.

Of course, that attitude figures into the price as well. The Rezvani Tank starts at $178,500, which is pretty steep for a rebodied Wrangler but not too bad considering the likely cost of production and all the tech they're claiming to pack in there.

By now, you're undoubtedly asking if Rezvani is for real with this thing or not. And honestly, we can't say. You can knock the styling and market case all you want, but the Tank looks well-assembled in pictures and does actually drive, at least according to this dramatic teaser video the company put out. At the same time, the product is full of contradictions: Night vision for stealth purposes, but a 500-horsepower V8 with a loud exhaust? Xtreme off-road abilities, but a custom body that's likely expensive to repair when things get a little crunchy?

Then there's things like the option sheet that's linked in the press release, which has missing capital letters in multiple spots and odd line spacing. Frankly, it looks amateur, and it's the little details like that that reflect poorly on an ostensibly high-end exclusive brand. Rezvani is currently taking $1,000 deposits on the Tank and promising deliveries within three months. We'll see what happens then.