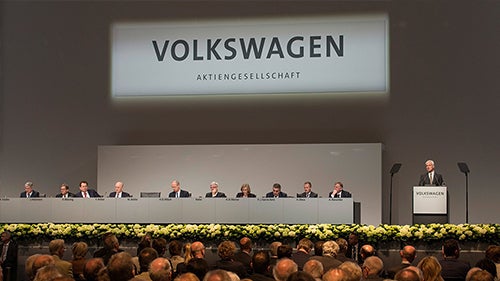 Ever since the Dieselgate scandal reared its ugly head, Volkswagen has been under fire for selling cheat-plagued diesel engines in the United States and around the world. Despite the massive fines and extremely bad pr, the manufacturer has continued to improve its standing with governmental entities and is fighting to regain its trust with the public. Volkswagen has continued to rebuild and look to the future, and that future is still filled with diesel VWs.

One of the more apparent focuses of Volkswagen Group was for electrified vehicles in the near future, however during their annual general meeting, this plan's scope is clearly wider than battery power. In fact, the internal combustion motor isn't headed anywhere, at least not any time soon. Despite budgeting for the double-digit-billion dollar investment in electrified vehicles, diesels and other environmentally friendly options appears to be the next big selling point for VW.

Diesel will remain indispensable for the foreseeable future,

The idea is for remaining internal combustion platforms to be made between 10 and 15 percent more efficient, pending a $10.9 billion investment in technology and manufacturing. This goes for diesel and gasoline-powered platforms for both the United States and Europe. What is not clear is if and when Volkswagen plans to bring more diesels to the US—Dieselgate may well have done too damage here.

Diesel sales at Volkswagen resumed in mid-April of this year after a regulatory commission ordered hiatus of over 18 months. After its first few weeks of sales, Volkswagen reported 12% of its sales were again from diesel-powered vehicles. This is down overall from its previously reported number of 25%, however given that the manufacturer was only permitted to sell the vehicles for about half of the month, this number may have been well on track to reach its 25% threshold and continue where it left off.

Volkswagen is determined to clear its name of any mistrust with the public and has been recently green-lit to begin selling off its recently fixed 2015-model-year diesel cars. Ever since this approval came to fruition, the automaker has begun a fire sale of those models, offering as much as $8,500 in incentives to clear the lots and regain some of its $4.3 billion in fines caused by the emissions fraud.