The "Stinger" name misses the mark, but a direct connection to BMW's M division raises hopes for a true high-performance Korean import. 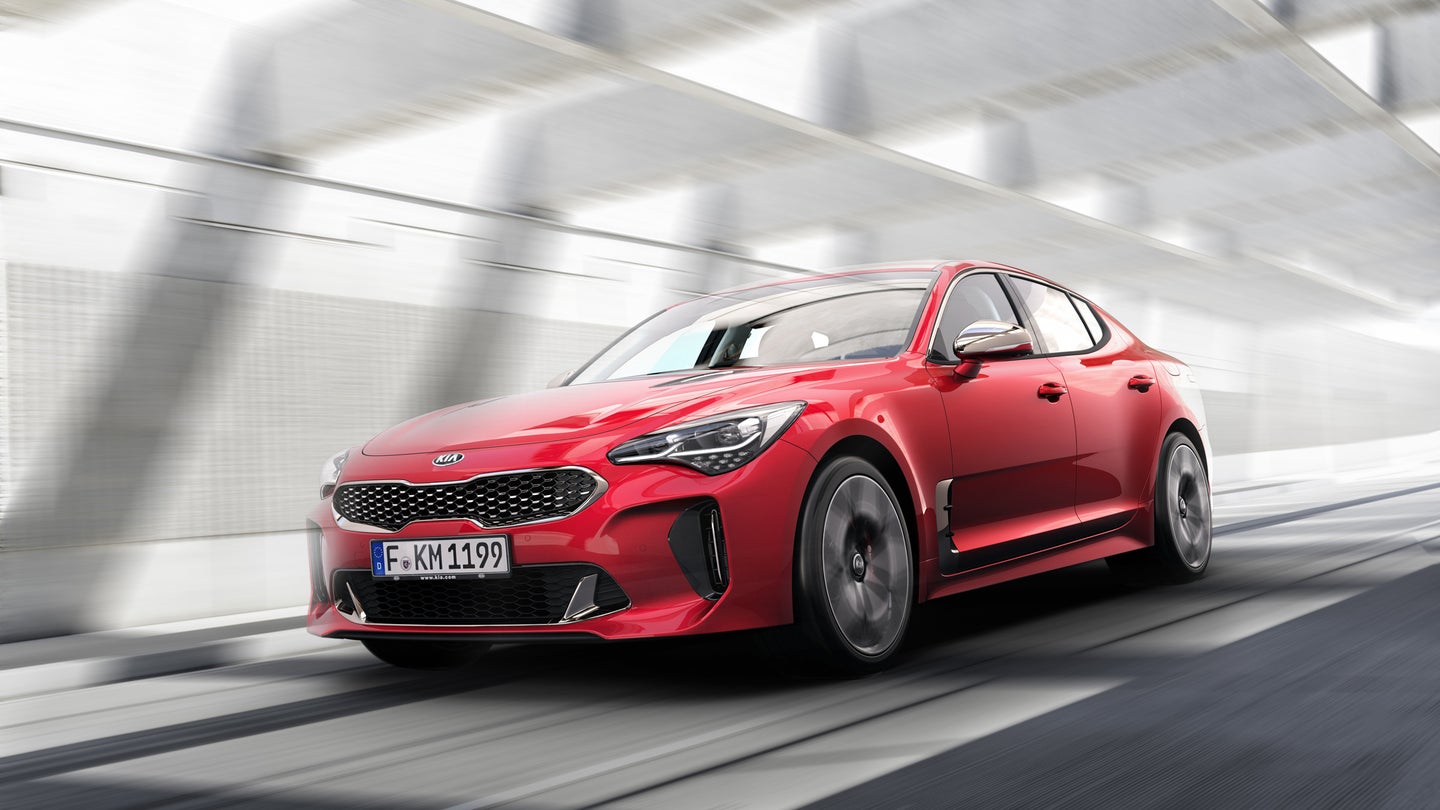 As the Detroit auto show curtain rose on the Kia Stinger, in a building that was formerly factory ruin but newly gussied up for a media booze-and-schmooze, intrigue was stirred with skepticism.

As the production version of the long-gestating Kia GT, first shown in Frankfurt in 2011, the Stinger flaunted the now-familiar taste (and talent) of Peter Schreyer, the Audi alum and Kia’s chief design officer. The GT looks cool and Germanic, a fastback four-door in the coursing vein of a BMW 4 Series Gran Coupe. And the prospect of a Poor Man’s BMW—with up to 365 horsepower and performance-tested on the Nürburgring circuit—might tantalize anyone whose shopping has been spoiled by a 3-Series that can run $50,000 and up.

But somewhere between the hot klieg lights and a third glass of champagne, a truism cut through the haze: South Korea has yet to produce a high-performance car, even a spunky underdog coupe or hatch, that’s worth a damn. True, Kia and Hyundai haven’t tried often. But when they have, specimens like the Hyundai Genesis Coupe have been disappointments, with compromised chassis, uninspired engines, and steering so numb that they might have been tuned in Antarctica. One theory, as good as any, holds that South Korea’s lack of any significant racing history, and its attendant passion and engineering pedigree, is the reason. It’s telling that the most sophisticated handler in Korean history, the Genesis G80 sedan, was tuned by England’s Lotus and not the Seoul teams themselves. And even that G80 is more a slick Lexus type than sport sedan.

Kia itself was busily managing expectations. A press release acknowledged that “The GT concept was something considered by many outside the company as little more than a dream for a brand known for producing mass-market transportation rooted in value.”

The company also underlined that the Stinger is designed as a gran turismo, a juggler of long-distance luxury and performance. It’s not about “outright power, hard-edged dynamics, and brutal styling.”

Accommodations make that point clear. Stretching just over 190 inches, the midsize Stinger is larger than any direct rival, including a 114.4-inch wheelbase that exceeds not only every compact sport sedan, but also the Mercedes CLS and Lexus GS. Trunk space is ample, and interior options include a 720-watt Harman Kardon audio system. A color TFT screen, backed by Kia’s excellent UVO infotainment system, relays performance data such as cornering g-forces and lap times, along with the usual navigation, trip, and other data.

Viewing Kia’s fetching, long-hood design, plus available Nappa leather and its usual array of high-value options, we see more of an Audi A4-fighter than a BMW-baiter. That’s not necessarily a bad thing; a rear-wheel-drive, near-luxury Kia sport sedan is still potentially a big deal—or two big deals, with the platform spawning Hyundai’s own take in the upcoming Genesis G70, and likely further models in Hyundai’s proposed high-performance “N” line. Naturally, you need to be cool with the un-luxurious name “Stinger,” vaguely retro and redolent of the Dodge Dart Swinger. (Can a Super Bee or Skeeter version be far behind?)

Arriving in showrooms late this year as a 2018 model, the Stinger should start in the low-$30,000 range. Buyers will find the GT concept’s cool suicide doors replaced by conventional portals. But the concept’s steeply raked windshield and fastback roof remain, along with the brand’s Tiger Nose grille, LED headlamps, triangular tail lamps, and big oval exhaust outlets.

A starter model gets the 2.0-liter, four-cylinder turbo from the Optima, but jumped-up to deliver about 255 horsepower and 260 pound-feet of torque. A more potent version brings the twin-turbocharged 3.3-liter V6 from the Genesis G90. Kia estimates 365 horses, 376 pound feet of torque, a 5.1-second romp to 60 mph, and a 167-mph top speed. An eight-speed, paddle-shifted automatic mediates power for both models, with no manual transmission available. A mechanical limited-slip differential is standard, while an AWD version with brake-based torque vectoring is an optional first for Kia. The familiar Kia-Hyundai Drive Mode selector twiddles through five modes to manage parameters including the throttle, transmission, and a new electronic suspension that Kia dubs Dynamic Stability Damping Control. (That selector has been notoriously unhelpful and superfluous in previous Kia and Hyundai models, so let’s hope that’s been addressed.) MacPherson struts handle suspension chores up front, with a multi-link set-up out back. Brembo disc brakes are standard on the V6 model, including four-piston calipers up front.

The Stinger’s real trump card may not be digital or mechanical, but flesh and blood. We’ll raise a hopeful stein of sochu to Albert Biermann, the former head tuner of BMW’s vaunted M division, lured to Seoul in late 2014 to direct vehicle testing and performance for both Kia and Hyundai. Biermann and his engineers directed the Stinger’s development on the Ring, and one positive sign is an electric motor mounted directly on the steering rack, as in leading sport sedans. Maybe, just maybe, this Kia will drive as well as it looks.

“I think for the Kia brand, the Stinger is like a special event,” Biermann said. “Because nobody expects such a car, not just the way it looks but also the way it drives. It’s a whole different animal.”

Or maybe a whole different insect. But enough jokes, because no one is laughing about Kia or Hyundai these days. A Vegas shark would advise not betting against them, especially with this Korean tag-team exceeding 1.4 million combined annual sales in the U.S. in 2016—just a fraction behind Nissan and Honda.

The Kia will drop into one mean nest of competitors. Not just BMW and Audi, but also the Mercedes C-Class, Cadillac ATS, Jaguar XE, Infiniti Q50, and Volvo S60. The Stinger is still an unfamiliar species here. But buyers may well recognize Kia’s familiar formula of space, value, and features per dollar. Add good looks and (we hope) genuine performance, and buyers may find the Kia worthy of further study.