Someone Is Taking a Big Gamble on 216 Diesel Volkswagens 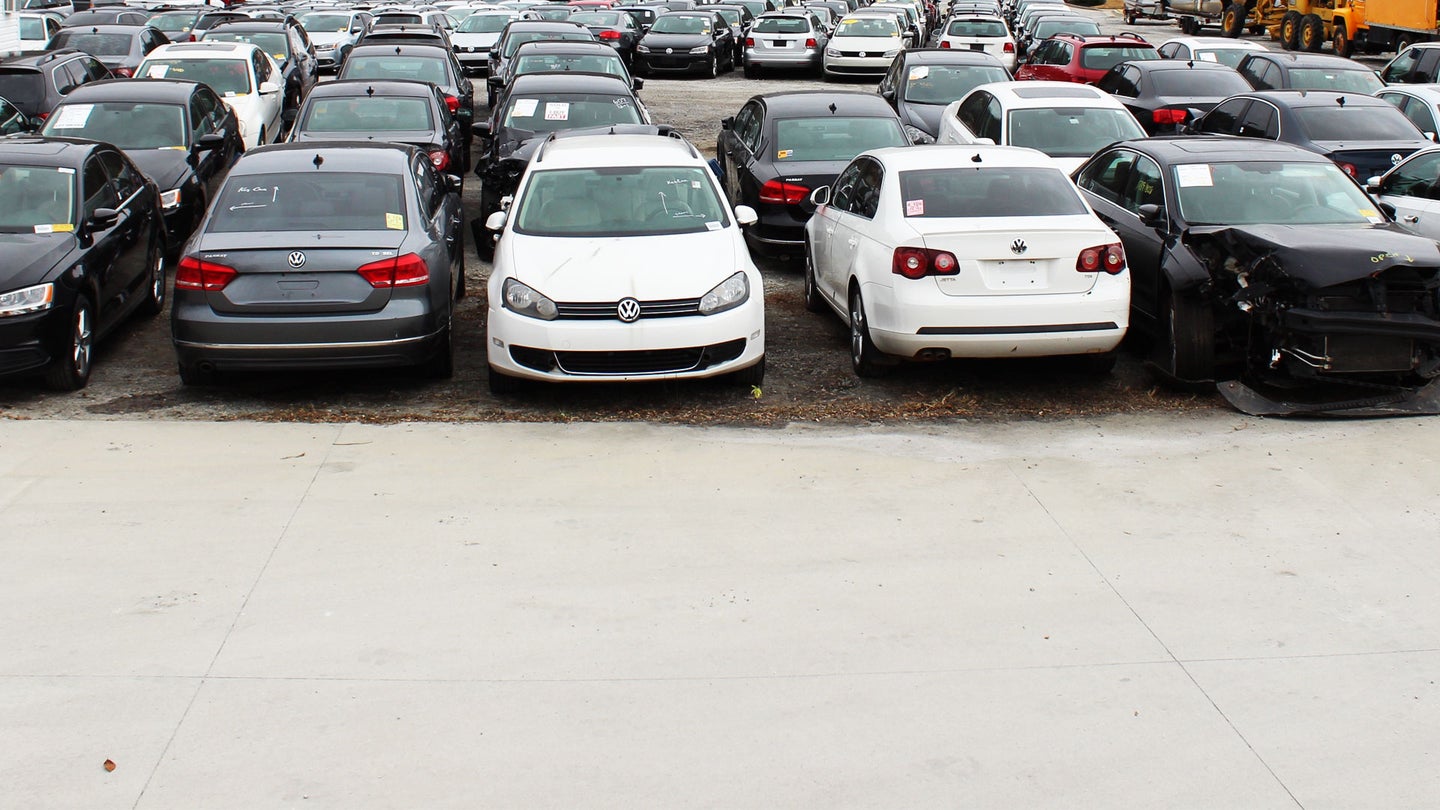 The Volkswagen diesels were stacked in neat little rows. 216 in total, according to a fellow that did everything from record VIN plates, to authenticate that many of the cars in question came from auto auctions throughout the country. One dealership seemed like they were buying them all. 216 cars? A giant investment and a heaping load of risk. As a dealer, I wondered whether they would become cars that would sit idle, or quick flips that would yield big money.

German cars aren’t exactly popular here in North Georgia, which is why I also pondered whether they had been there for days, or weeks, or months. Perhaps someone in that place was doing their homework. Reading the legalese, betting big, or just investing in a sure thing. Maybe someone else would soon be hitting ‘em where they ain’t.

To figure it out, I had to go to two sources: One that could offer the right questions, another that had the right answers. And those answers would only make sense in the context of Volkswagen's massive emissions cheating scandal, and the ensuing multi-billion dollar buyback program. I'd have to divine how VW's buyback program created uncertainty for some, and opportunity for others.

The first source was Kelley Blue Book. Most of you are familiar with their role in figuring out used car prices; from three year old Miatas to thirteen year old minivans. What you may not know is that they're also a small part of an automotive industry colossus called Cox Automotive that sells over six million vehicles a year.

Somewhere, buried in all of KBB's data, there's insight—but the question of a big gamble on TDI cars was a tough one. I asked Kelley Blue Book to take the deeper dive and compare the price difference between the price of diesel vs. non-diesel Volkswagens. It would be a start to discovering if this fellow had mapped his own path to a profit.

What we found was a risky gap between diesels and non-diesels.

When the Volkswagen emissions scandal was first reported on September 18, 2015, the financial fallout for diesel owners was horrendous. Wholesale resale values plummeted from $13,600 in August 2015, the month before the scandal became public, to just under $10,700 two months later. A drop of over 20% in value for the average Volkswagen equipped with a 2.0 Liter TDI engine.

If you owned a loaded late-model Volkswagen Passat, or an Audi A3 in late 2015, you may have seen nearly twice that drop in value. On Wall Street, there is a quaint little phrase for this type of situation as it applied to Volkswagen owners—Panic mode. Uncertainty over whether Volkswagen could repair the emissions issues—or even buy the vehicles back, and for how much—impacted the short-term value of Volkswagen diesels. This quickly led to a market loaded with unhappy sellers and very few buyers.

Within six months, the price of a VW diesel would plummet even further. Over 485,000 diesel cars that had once been sold at a stiff 10% to 20% premium were approaching parity with their non-diesel alternatives. By February 2016 the average price was $10,121 for diesels vs. $9.608 for non-diesels.

Was this the exact point where that ambitious owner of 216 Volkswagens began to buy all of his cars on the cheap? It turns out he didn’t buy any of those cars at the low point. Not a single one. The risk was too great and the reward too uncertain.

February turned out to be the inflection point where Volkswagen slowly started to answer the marketplace's questions as to how much a VW diesel was really worth—but it got worse for owners before it got better. By February, there would be blood in the water. US Regulators were rejecting Volkswagen’s recall plans, and 48 states were filing lawsuits. Everybody wanted a piece of Volkswagen, and owners weren’t getting any answers when it came to compensation.

This was also a terrible time to be a seller. But then the market started to change. Not for owners, but for dealers who received them as trade-ins. Look again at the right side of the graph and notice how diesels slowly began to make up ground, right before a big spike.

On June 28th, all the ambiguity disappeared. Volkswagen agreed to allocate $13.5 billion to Volkswagen diesel owners. As the weeks went by, and the specifics of the deal became crystal clear, the values of diesels skyrocketed to a plateau of $14,500.

Early August is when this intrepid buyer decided to start purchasing diesel-powered Volkswagens. After the announcement, but before the peak. An investment requiring a slew of purchases from as many auctions and dealerships as possible.

And despite jumping into the market after it bottomed, he may still end up with a big return on an opportunity that no longer appears to carry the same risk. I know of a dealer who received a check for over $18,000 on a 2011 Jetta bought for $8000 and owned for nine months. This savvy buyer will make a greater overall profit, since he’s managed to win these VW diesels at auction 216 times.

Don't doubt for a minute that, because of VW's emissions cheating and its subsequent fallout, there will be many who question a new Volkswagen as a long-term investment. Even the guy who liked the value proposition enough to snap up 216 Volkswagens will probably feel a wave of relief when he unloads them. That’s the biggest tragedy for many soon-to-be-former Volkswagen owners. They were emotionally invested too—in a capable and likable car. TDI owners were a loyal bunch, but sometimes the prospect of a payout seems like a better investment than trust.