The New Audi A5 and S5 Coupes Are Stylish Sex Machines

Choose whichever engine you like. It looks good either way. 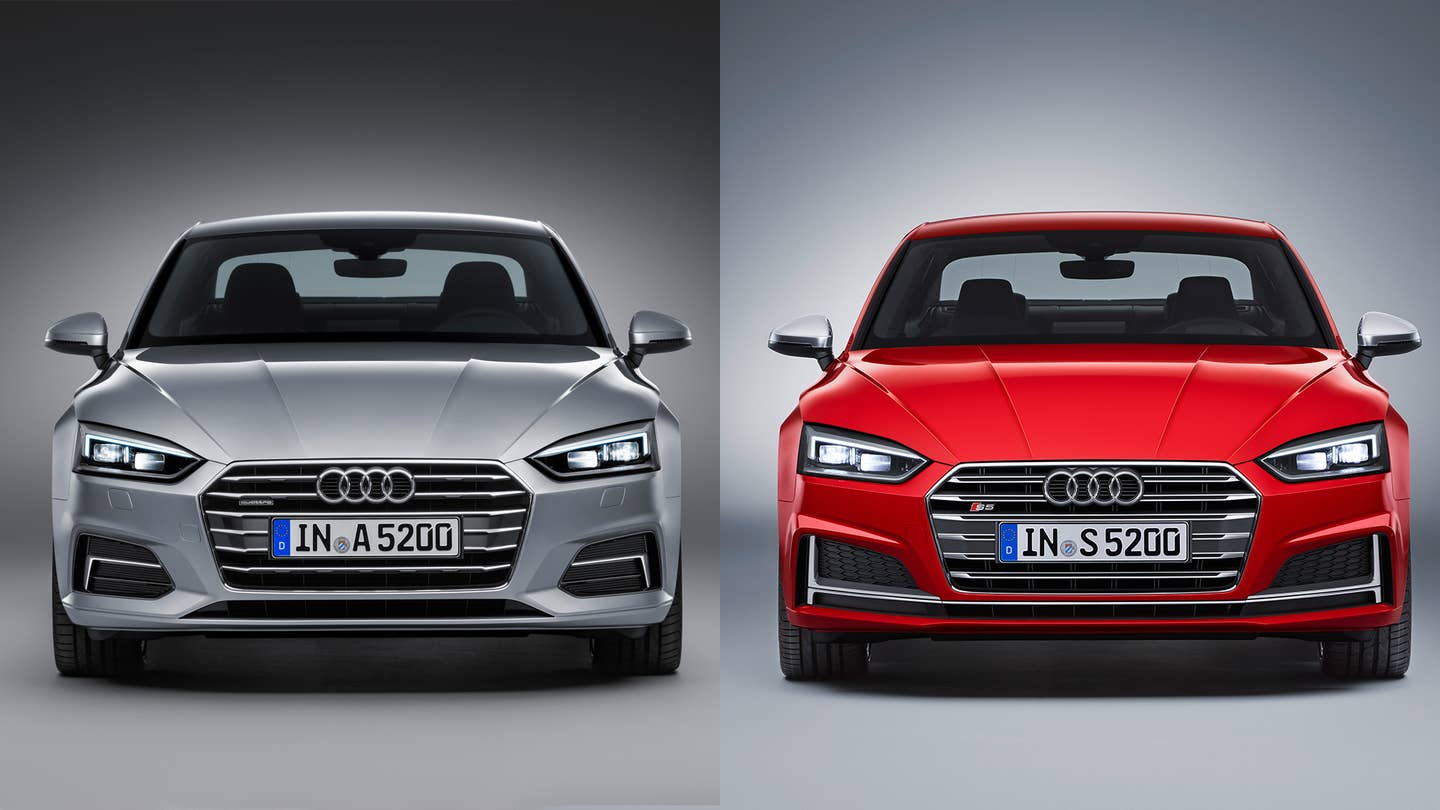 After a lengthy wait and a weird art show, Audi has pulled the wrapping paper off the 2017 A5 and S5 coupes—and unless you have a desperate need for regular back-seat access, it's hard to see a reason to choose the new 2017 A4 over one of these two-door beauties.

Coupes, ultimately, are a style-driven choice—hey, if you wanted utility, you'd buy a minivan—so Audi's new dynamic duo pulls no punches in the battle for eyeballs. Both A5 and S5 wear sharply-creased sheetmetal over toned musculature, with a futuristic nose that bears a passing resemblance to the Prologue concept car, the long, elegant profile of a classic gran turismo, and a tail like an S3 that spent the winter trapped in a cabin with a Buns of Steel videotape.

The interior looks similar to the A4 these models share most of their bits and pieces with—which is to say, as futuristic and shiny as J.J. Abrams's U.S.S. Enterprise. Leather and chrome flow through the driver-focused interior, which now includes the always-entertaining 12.3-in TFT Audi virtual cockpit display as an option. And thanks to the revised proportions, there's more room for both passengers in the cabin and junk in the trunk than the outgoing model.

In the power department, German customers can choose between five different engines in the A5, with two gasoline-powered units and three oil-burners on draft. Here in the United States, we'll probably be stuck with the top-level gas engine, a turbocharged four-cylinder; Audi didn't mention how much power that motor makes, but if the previous A5 is anything to go by, it should be roughly in line with the 252-hp the A4's sole engine here makes. And like the A4's engine, that power should be routed to the ground through a seven-speed dual-clutch transmission. (Europeans receive the option of a six-speed manual, but we'll probably see Bob Lutz cry on camera before we see it here.

Americans, should, however, receive the 2017 S5 in all its 354-hp glory. That power comes courtesy of a turbchargerd V6 in place of the outgoing supercharged six-pot, sent to all four wheels through an eight-speed automatic. (Audi seems to have come full circle on transmission policy; not long ago, the carmaker reserved dual-clutch transmissions for its performance models, while more pedestrian cars used torque-converter autos.) Mat the gas from a stop, and Audi says the S5 will zoom from 0 to 62 kph in 4.7 seconds.

Considering how long the previous models have been around, Audi could have phoned in the new coupes and assumed people would be happy just to see something new. (Put it this way: When the A5 landed in dealerships, the number one song in America was a little ditty called "Umbrella," by an up-and-coming Barbadian singer named Rihanna.) Instead, the carmaker knocked out a pair of sexy coupes sure to brighten driveways across the world.