The Ultimate isn’t strictly about pampering. It’s also tech-forward. But does the $82,795 price tag really deliver more than a regular Denali? 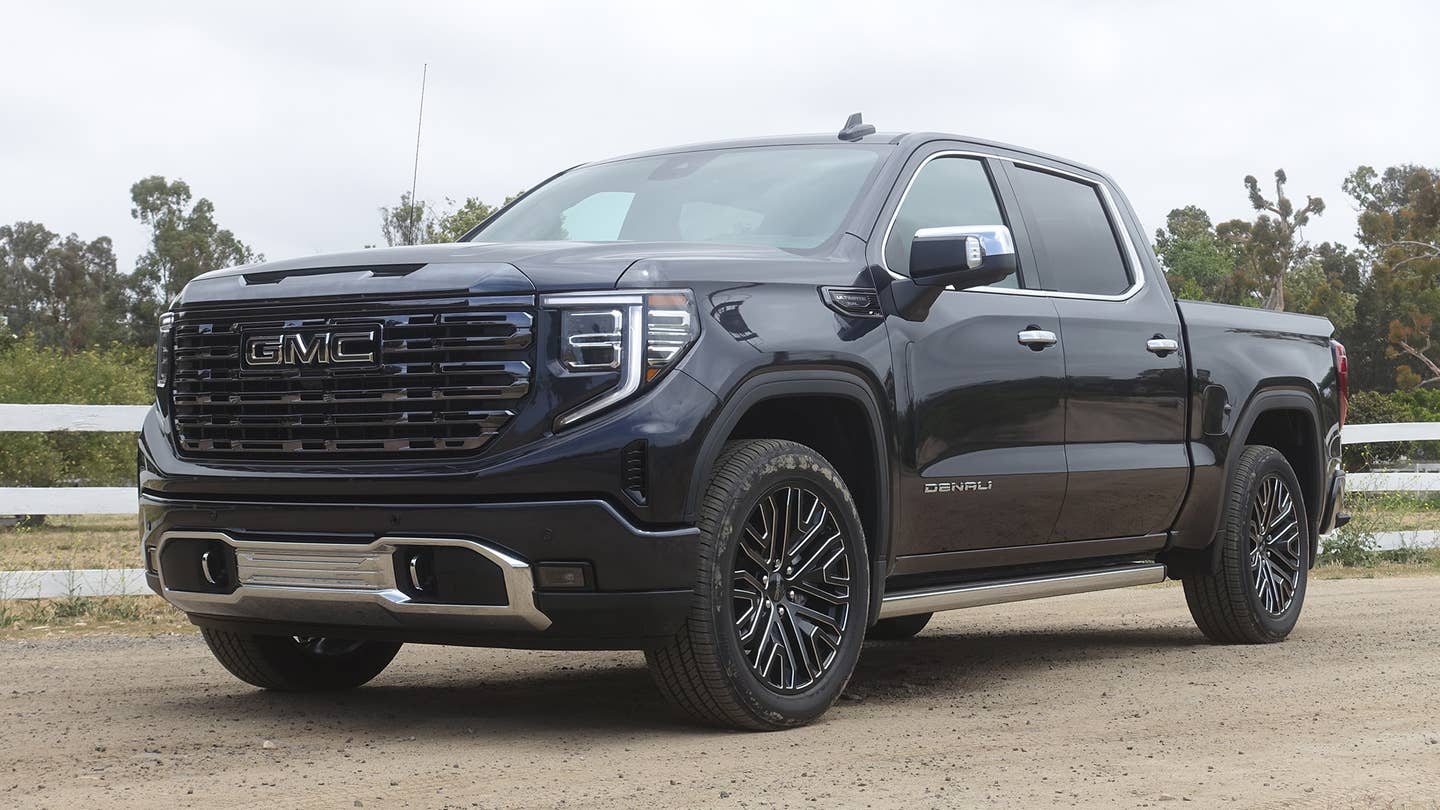 Upscale specialty luxury trucks are beginning to dominate the full-size pickup space. GMC has been at the center of that conversation since the very first Denali pickup debuted way back in 2001, and that sub-brand has been a monster hit for GMC ever since. If GMC is good at one thing, it would be creating fancy trucks buyers truly crave. If that’s your jam, prepare to get in line with everybody else who can’t fathom owning a luxury vehicle that can’t tow a boat, because the new 2022 GMC Sierra Denali Ultimate is the most luxurious truck the company has ever produced.

If you don’t believe such people exist, consider this: GMC says Denali models make up about 20 percent of all Sierra 1500 sales. And they anticipate this new Ultimate model will add roughly another 10 percent to that mix for Crew Cab models. Put another way, about 30 percent of all GMC Sierra 1500 Crew Cabs will soon have a sticker price north of $65,000. That’s staggering.

But the Ultimate isn’t strictly about pampering. It’s also tech-forward. This is the first pickup truck to offer GM’s Super Cruise hands-free driving assistance, and here it’s smart and capable enough to work even when towing. Yep, you can tow a trailer on the highway with your hands off the wheel.

Super Cruise is certainly impressive tech. And a comfy interior is always welcome. But does the $82,795 Ultimate really deliver more luxury than a regular Denali? After all, with equal powertrains, the base Denali costs around $13,000 less than the Ultimate. Is the top trim worth the extra scratch? I road-tripped from Los Angeles down to Encinitas, California, to find out.

GMC keeps the exterior of the Sierra Denali Ultimate classy. Yes, this is a premium truck, but the look isn’t over-the-top flashy. In fact, GMC went the dark trim route and it looks sharp. There’s only one modest fender badge that calls out the Ultimate trim as well as the engine on-board. The Sierra receives a subtle exterior update for 2022 which includes new grill designs and reworked headlamps.

The Ultimate has its own grille dressed in what the company calls Vader Chrome—and it’s sweet-looking. The color treatment extends to the trim, too. The dark 22-inch wheels with machined accents are quite handsome. As one might imagine, power side steps are standard here even though this truck isn’t particularly tall. The Ultimate is an all-in model, meaning they included just about every cool feature in GMC’s toolbox. So this rig receives the CarbonPro composite bed along with the six-way folding MultiPro tailgate and the built-in Kicker sound system. And because it comes standard with Super Cruise, GMC redesigned the rear bumper to fit all the short and long-range radar that’s needed for that tech.

One might imagine the Ultimate might receive more power or torque than the normal Sierra. But that’s not the case. Every Ultimate comes standard with the venerable 6.2-liter, 420-horsepower V8, with 460 lb-ft of torque. The 3.0-liter Duramax diesel inline-six, rated at 277 hp and 460 lb-ft of torque, is optional. Both engines are mated to a 10-speed automatic. Four-wheel drive with a two-speed transfer case is a part of this package and includes an auto all-wheel-drive mode, which is perfect for foul-weather street driving. Mechanically, the Ultimate is identical to the Denali and receives that model’s adaptive ride control suspension.

Inside, the Ultimate delivers a cohesive, thoughtful and noteworthy upgrade over other GMCs. The leather is soft and the special wood, open-pore Paldao, is particularly attractive. What’s cool is that GMC has decorated various surfaces with laser-etched topographical maps of Mount Denali. You can see and feel it on the wood trim, the seatbacks and it’s even on the charging pad on the center console. Reach your hand up to the ceiling and you’ll touch the new microsuede headliner. That’s a nice step up from a typical truck interior.

The Sierra gains a much-needed and much-improved dash layout for 2022. And for the first time, GMC has a unique interior design compared to its Chevrolet brethren. The more expensive GMC trims (AT4 and up) models have interiors with distinct vent shapes as well as the locations of dash knobs and the switchgear. The centerpiece of the interior are the dual screens. There’s a 12.3-inch digital and reconfigurable gauge cluster as well as a 13.4-inch infotainment touchscreen. And you can drag icons you use more frequently around on the screen which is helpful. These both come on SLE and above grades and include Google built-in. That integration works well. I was able to simply touch the voice button and ask for a fuel station and a taco shop (not at the same time) and Google simply asks if I'd like to navigate to those locations. Say “yes” and you’re on your way. So easy.

There’s also a big 12.3-inch heads-up display. None of this is specific to the Denali Ultimate but the clarity of these displays along with the depth of their functionality are certainly befitting this truck. The only reason to consider a Chevy interior instead is for the infotainment screen placement. On Chevrolet’s dash, the screen is higher up on the dash, level with the gauge cluster. GMCs have the screen a few inches lower and closer to the driver. As for me, I quite like the GMC layout.

The Ultimate does come standard with massaging front seats which work great once you figure out how they work. The functions are controlled by a knob deep down on the side of the seat. The touchscreen tries to help guide your hand as to which way to turn that knob and which buttons to press but it doesn’t allow you to simply use the touchscreen to make those commands. After two days, one spent driving the Ultimate and the second in an AT4X with the same seats it was still frustrating to use.

Overall the interior is a great place to spend time, but there are a handful of areas where GMC could have upped its game. After all, this is the “Ultimate”, right? The paddle shifters are plastic, not metal, and look a little chintzy. And while the leather on the dash is quality, there’s hard plastic underneath. A thick layer of soft padding would add to the luxury vibe. The top models of many European luxury brands often have a special center console or unique interior features you simply can’t have on lower models. GMC could have taken that approach here too and offered a standout luxury feature not found on typical pickups, like perhaps a beverage cooler for the center console.

On the road, the Ultimate drives smaller than it actually is. The street-oriented suspension and low-profile tires offer a level of maneuverability that off-road-focused, full-size trucks just don’t have. The ride is smooth too, despite those tires. GMC says that’s the number one suspension characteristic their Denali customers want. And the Ultimate certainly delivers. I hit some rough road patches and railroad crossings, events that would likely cause the rear end to buck or step out, and the Ultimate tracked straight and soaked up those bumps.

There’s a little more road noise in the cabin than I expected. The 12-speaker Bose audio system has AudioPilot which adjusts the music to compensate for road noise but the truck doesn’t have a specific noise-canceling system per se on board. GMC should lead the pack with this tech plus a bit more NVH insulation to make for an even quieter cabin.

The thrust from the 6.2-liter V8 is impressive. This is one very quick truck that pulls hard from any gear. You can easily break the rear tires loose from a stop. And it sounds great too. The tuning of the transmission is spot on and clicking the drive mode selector over to Sport makes the powertrain feel even more alert. The brake pedal is firm and the brakes themselves are strong and responsive; that’s not typical of most pickups.

After only a short drive on the freeway, it was clear that Super Cruise is a technology you very much want on a pickup truck. The tech has been upgraded and updated to work on the Sierra and certain Chevrolet Silverado models. (It's optional on the regular Denali.) Last year, Super Cruise gained the ability to change lanes by tapping the turn signal. But the Ultimate has the ability to change lanes automatically if it sees that the lane is clear and decides the move would be advantageous.

I really enjoyed using the system; or rather, watching it go to work. The truck was able to tuck itself behind a slowing vehicle without a problem. However, in one instance, my plan was to take the next exit and Super Cruise wanted to move me to the next lane over to pass someone. I did have to override the system and keep myself in the intended lane for that exit. The good news is you can deselect this automatic lane change function in the vehicle settings and make the turn signal lane change the preference. All the while, the infrared camera mounted to the steering column kept an eye on my eyes. If I looked down at the infotainment screen too long, the green band on the steering wheel would blink, telling me to pay attention.

Later, I had a chance to tow while using Super Cruise. And it worked well, to be sure. GMC says it's added a curve speed control feature that works when towing. So, the system will slow the truck and trailer slightly in a bend to make the curve a little more comfortable when towing. Smart. In heavy traffic, the system is a real savior. However, as traffic picks up speed and then slows quickly, inputs from the throttle or brake are a little abrupt. For loads where smooth driving is really important, like towing a horse trailer, for instance, I might choose to take the reins myself.

The only somewhat hairy moment while using Super Cruise was passing a Semi-truck that drifted a little close to my truck. I really wanted to nudge the wheel and give myself a bit more space. But luckily, there were inches to spare. Those sensors in the rear bumper are blocked by when towing, so unfortunately the system’s lane change functions are deactivated with a trailer in tow. After talking to GM’s Super Cruise experts on hand, it seemed like GMC might offer a solution to this in the future.

The Ultimate delivers quite a lot of equipment and technology in a package that’s really great to drive. It’s priced right on top of a Ford F-150 Limited when that truck’s optioned with the expensive hybrid drivetrain. At the same time, a Ram 1500 Limited comes in about $10,000 cheaper. I like the Ultimate’s interior, Super Cruise and that dark chrome trim. But you can get quite a bit of that same equipment (including Super Cruise) by loading up a Denali with lots of options and save a few thousand dollars in the process. But for those that want the top GMC—and a little help from the machines when it comes to highway cruising and towing—the Ultimate won’t likely disappoint.

Ben Stewart resides in Southern California and has been an automotive journalist for nearly 30 years. He specializes in reviewing cars, trucks, and SUVs.

The Yukon’s new Ultimate trim borrows a page off the Escalade’s playbook in terms of luxury and tech.