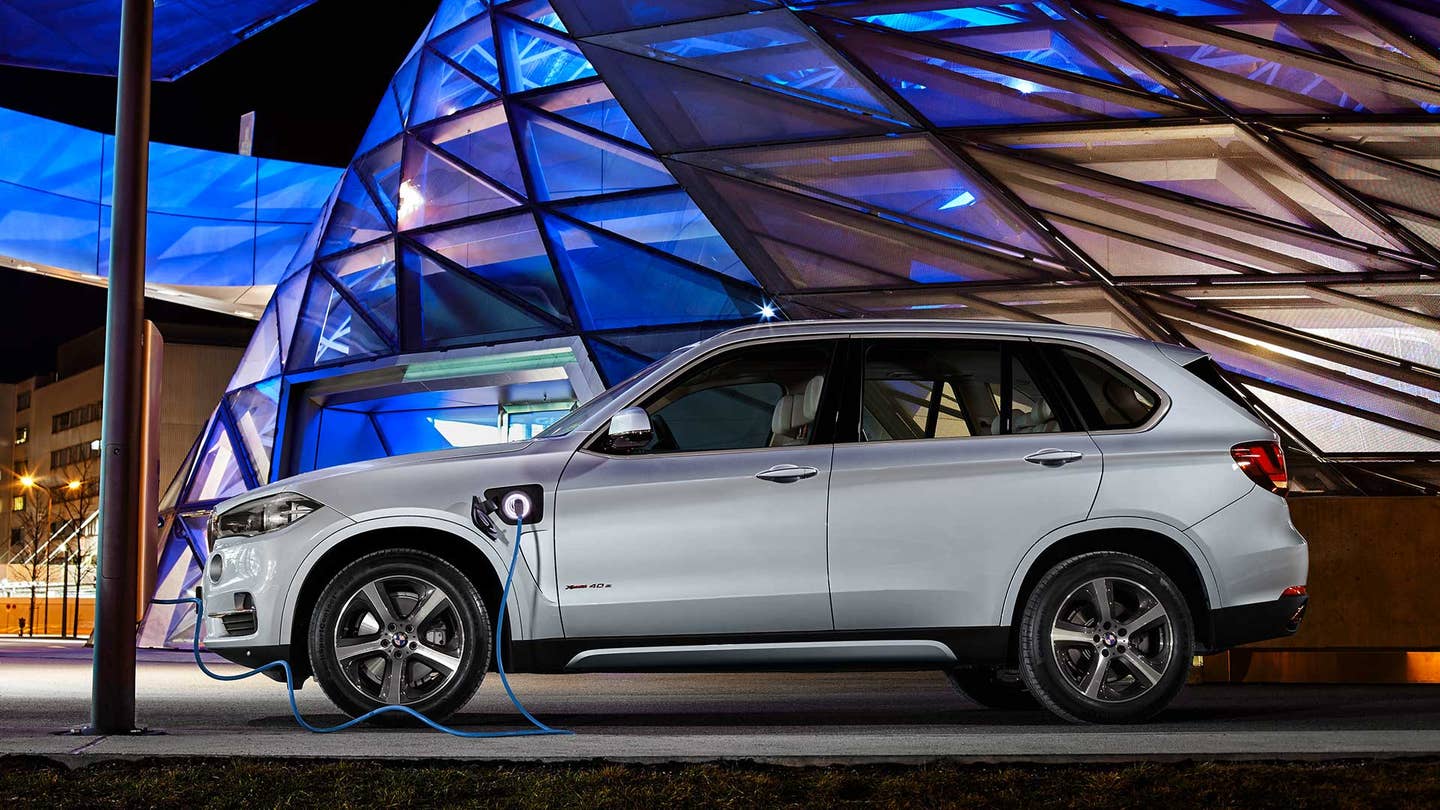 Who am I? Why am I here? No, this isn’t some Sartrean crisis. Behind the wheel of the BMW X5 xDrive 40e, I’m trying to imagine myself as the target demographic for BMW’s first plug-in hybrid in America. You know, the way Toyota will tell you that urban millennials with active lifestyles and a purebred Maltese are dying to drive a Corolla. But watching the BMW struggle to keep its twin-kidney chin above 23 mpg, I’m beginning to worry that I don’t actually exist.

Also, that there aren’t many customers who’d pay $63,095 (see: $8,200 more than a non-hybrid X5 30i) to save perhaps $450 per year in energy costs. And even if I recognize myself as gung-ho on conservation, then why am I driving a performance SUV that boldfaces the “S” on its Bavarian chest? As with its sub-brand i3 runabout and i8 supercar, BMW seems to be seeding the currently fallow market for hybrids and EVs, then waiting patiently for customers to sniff and pluck them. The company is pledging to develop a plug-in version of every major model, dirt-cheap gasoline be damned.

Consider the plug-in X5 a deluxe halfway house between a conventional SUV and Model X, except without the green glory (and neighborly envy) afforded by the all-electric Tesla. The BMW offers zero hint that you’re plugged into the electric zeitgeist, aside from a hinged plug port on the front fender and the demure lower-case “e” on its flank.

So it’s all on you, buddy, to decide if the X5’s estimated 14 miles of all-electric operation will transform your commute. The government credits those electric miles at 56 mpge, meaning the BMW sips like a Prius for the first 14 miles of your day—a too-quick espresso shot for many drivers.

Charge-ups take three hours on BMW’s Level 2 home charger, closer to seven hours on a household outlet. An electric motor, which is cozied into the eight-speed automatic transmission, supplies 111 horsepower and 185 pound-feet of torque, a peak speed of just 75 mph. Punch the eMode console switch to lock the BMW into electric-only operation. Another button reserves precious juice for later—say, for those megacities (BMW loves the word “megacity”) of tomorrow, which will bar your guzzling SUV at the city limits.

From there on, it’s hybrid time. The 2-liter TwinPower engine, a prince in the four-cylinder kingdom, heralds its arrival with 240 horsepower and 260 pound-feet of torque. In concert with the electric motor, the hybrid system can send up to 308 hp and 302 lb-ft. to all four wheels, enough to reach 60 mph in 6.5 seconds. That won’t threaten a 567-horsepower X5 M, which turns the trick in 3.9 seconds, but it’s still damn quick for an electrified whopper that weighs 5,220 pounds. Top speed rises to 130 mph when the engine comes out to play.

The ever-optimistic feds figure this BMW will return 24 mpg in combined city and highway hybrid operation. But while the X5’s all-wheel drive system—which works even in all-electric operation—kept my wheels churning during the blizzard that hammered New York, the BMW never once reached 24 mpg. And, trust me, I spent 70 miles pussyfooting and Priusing with the best of them, barely brushing the accelerator, driving exclusively in the energy-saving EcoPro mode. For my troubles, the BMW returned 23 mpg.

Highway fuel savings seemed negligible, even with X5’s coasting mode, which shuts off and decoupling the engine when the nose is descended toward sea level. The answer, it seems, is to always be pointed downhill. BMW also claims the electric motor will propel the car from a start to roughly 45 mph, but I couldn’t break 15 mph before the gas engine kicked in. This hybrid’s one clear advantage is city driving: Through Manhattan, the kind of sludge-flowing traffic that’d bring a standard X5 to 13 or 14 mpg at best, the xDrive 40e managed 20 mpg

The roomy, richly appointed interior affirms your suburban station as well as any X5, despite the wearying continuity of BMW’s cabin design, like coming home to the same medium-rare filet for years on end. Navigation maps revealed the location of public charging stations. A central iDrive screen adds familiar hybrid helpers, including a real-time flowchart to show gasoline, electrons or both coursing through the BMW’s veins. A remote smartphone app can mildly pre-heat or cool the car prior to your arrival.

The lithium-ion battery tucks in back, where it does steal the generous below-floor storage space found in other X5’s. That packaging eliminates the usual third-row seating option, and hoisting groceries onto the ultra-high cargo deck might inspire a new form of crossfit training. Cognitive dissonance came in the form of a $4,350 M Sport package, including an aero body kit, 20-inch wheels, an M steering wheel, lovely open-pore wood trim and more.

That M treatment boosted the X5’s spirits in curves, where it remains the closest thing to a Porsche Cayenne in the SUV class—at least until the Model X shows up, albeit at double the BMW’s price. That spirit was sapped a bit by the regenerative hybrid brakes, whose pedal felt more mashed-potatoes than the usual Bavarian cream.

Out the charger-equipped door, the BMW reached $74,995. That, for a luxury SUV that lifts standard X5 mileage from roughly 18 mpg up to the low 20’s. (Plus a Tesla imitation game for 14 miles per charge). Skip the existential crisis. Just look in the mirror and tell me: Do you see yourself in a hybrid X5?