Still, a good track-day candidate? There are 5,425 reasons why that might not work—but it'd sure be fun to try. 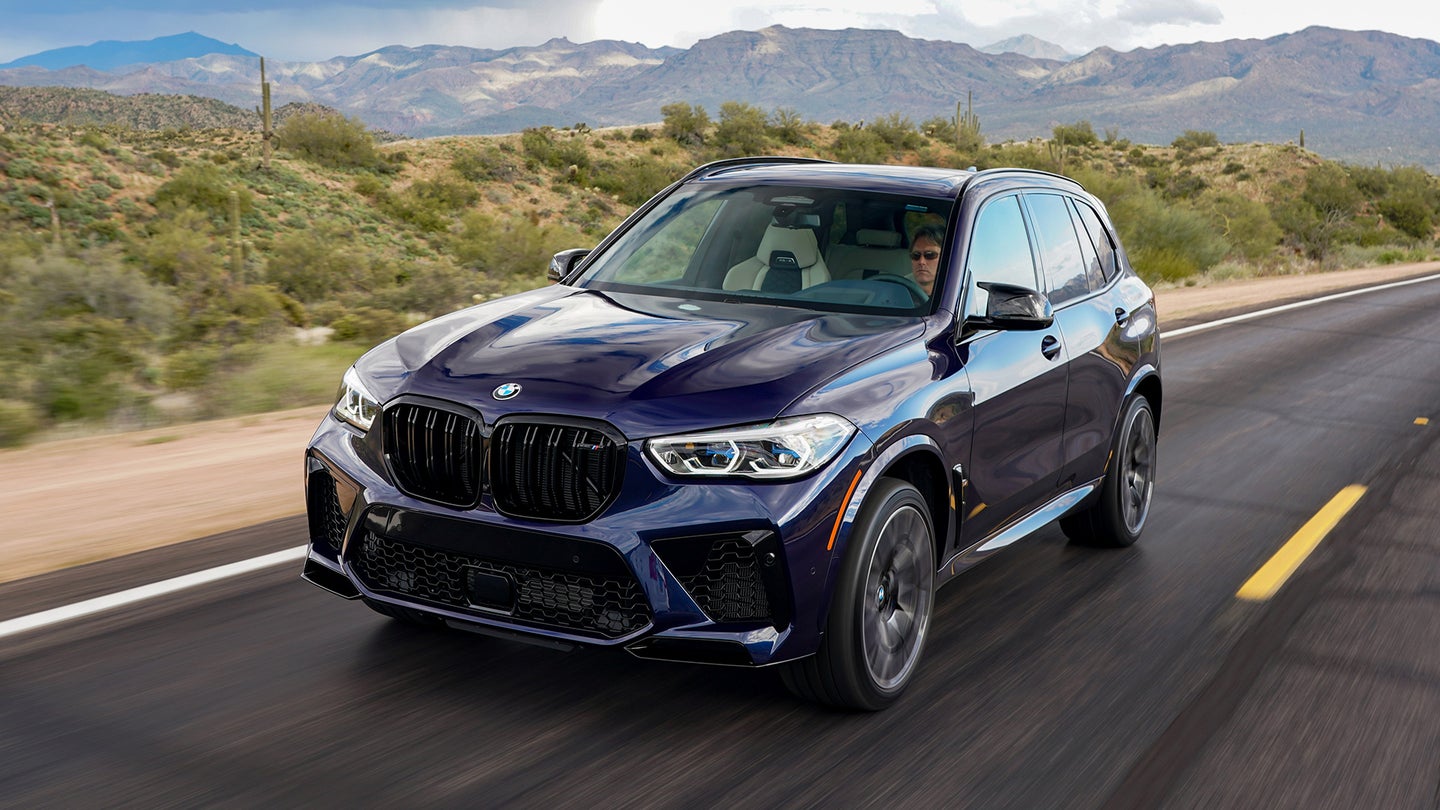 “SUV racing will be the next big thing in motorsports,” said no one ever. Unless you count the Dakar Rally or SCORE off-road racing. (And I do remember seeing a 2004 Jeep Grand Cherokee with a Tiki Bar theme getting lapped numerous times at a LeMons race.) Seriously, though, it’s not a thing. And yet here I stand next to a new 2020 BMW X5 M Competition, a high-output variant of the freshly redesigned and already track-capable 2020 BMW X5 M Sports Activity Vehicle.

I can’t decide if I should shoot it a furrowed eyebrow or an eye-roll, so I come dangerously close to executing both at once. I eventually elect to ignore the marketing and let the X5 M Competition speak for itself.

The high-level specifications are a mixed bag. The X5 M, like the fourth-generation X5 on which it's based, has grown bigger in all directions. This does wonders for cabin space, but its curb weight of 5,425 pounds is 165 pounds higher than before. The power-to-weight math, on the other hand, suggests that this year’s upgraded 4.4-liter twin-turbocharged V8 can deliver more than enough to offset the added mass.

There are some promising chassis changes hidden underneath, but the only way to see if it adds up to something special involves heading out to tackle a few of my favorite deserted Arizona backroads.

V8 Powertrain Gets a Revamp

Much of the 4.4-liter twin-turbo V8 engine is the same as before, which is a good thing. It’s got a stout bottom end and a robust lubrication system that won’t starve for oil even when cornering at 1.2 g. Its two turbochargers reside within the Vee, with a cross-bank manifold connecting each to a V4 sub-set of the engine instead of a left or right cylinder bank, a scheme that delivers a steadier cadence of exhaust pulses to the turbine wheels. 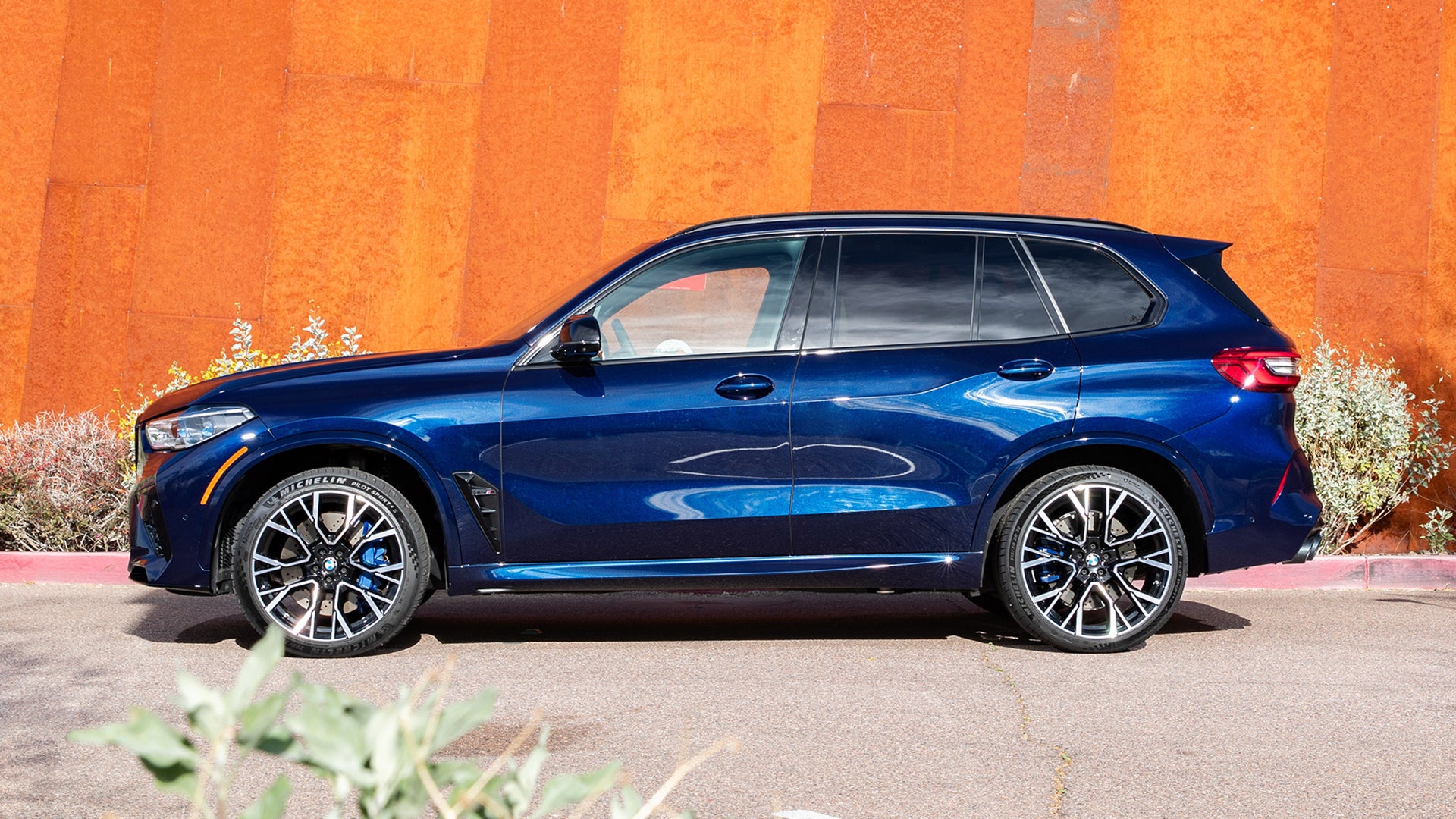 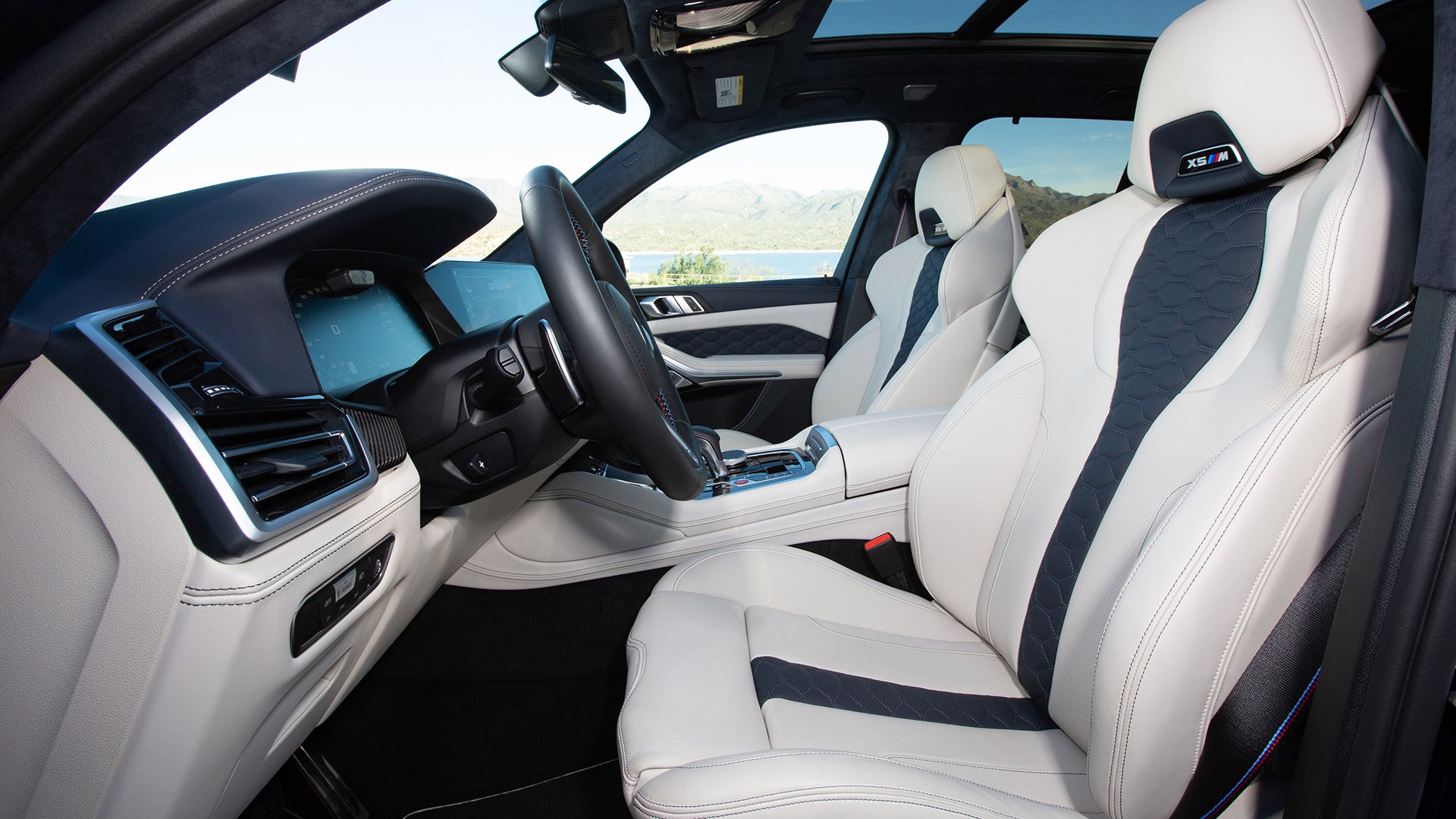 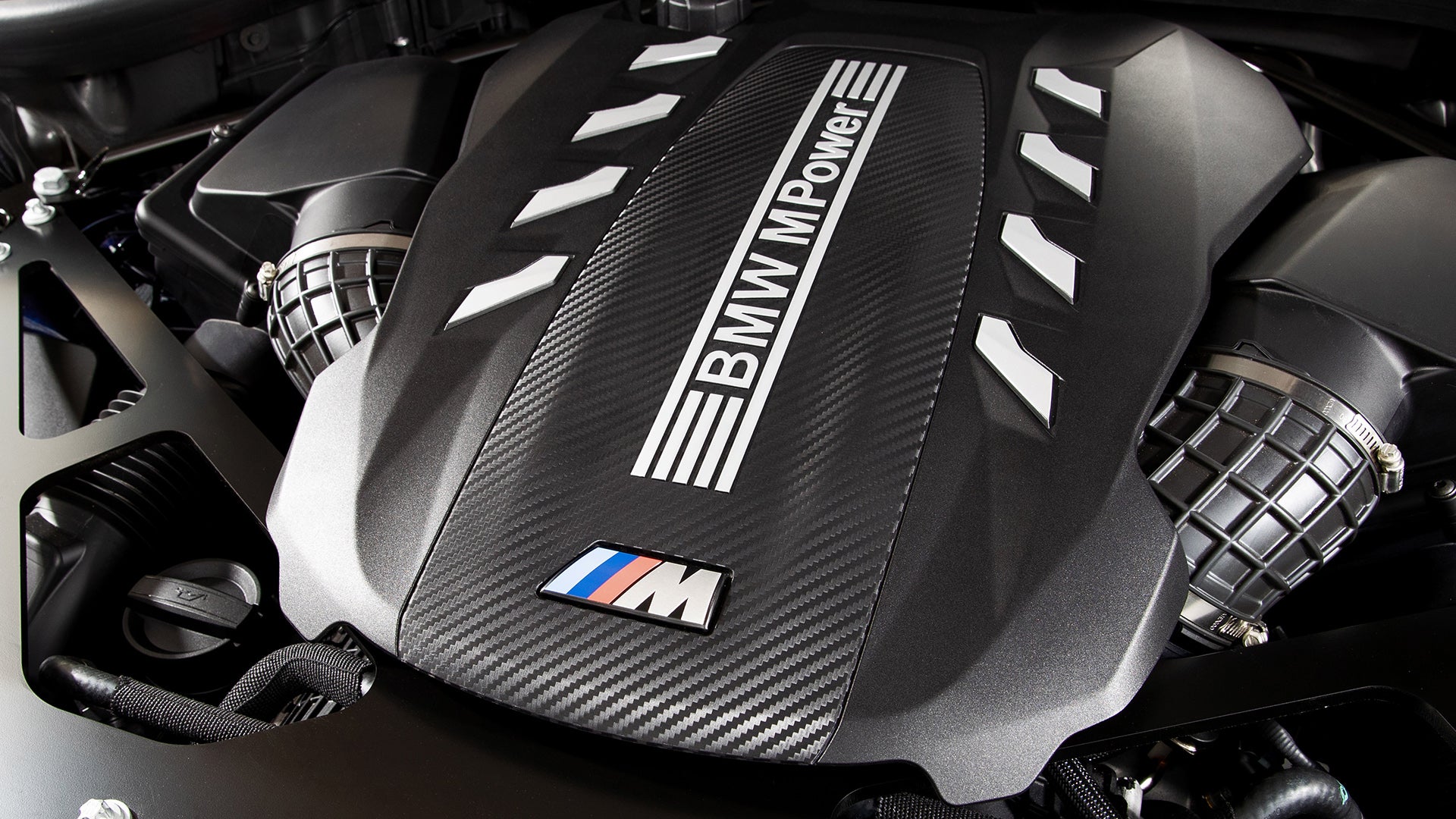 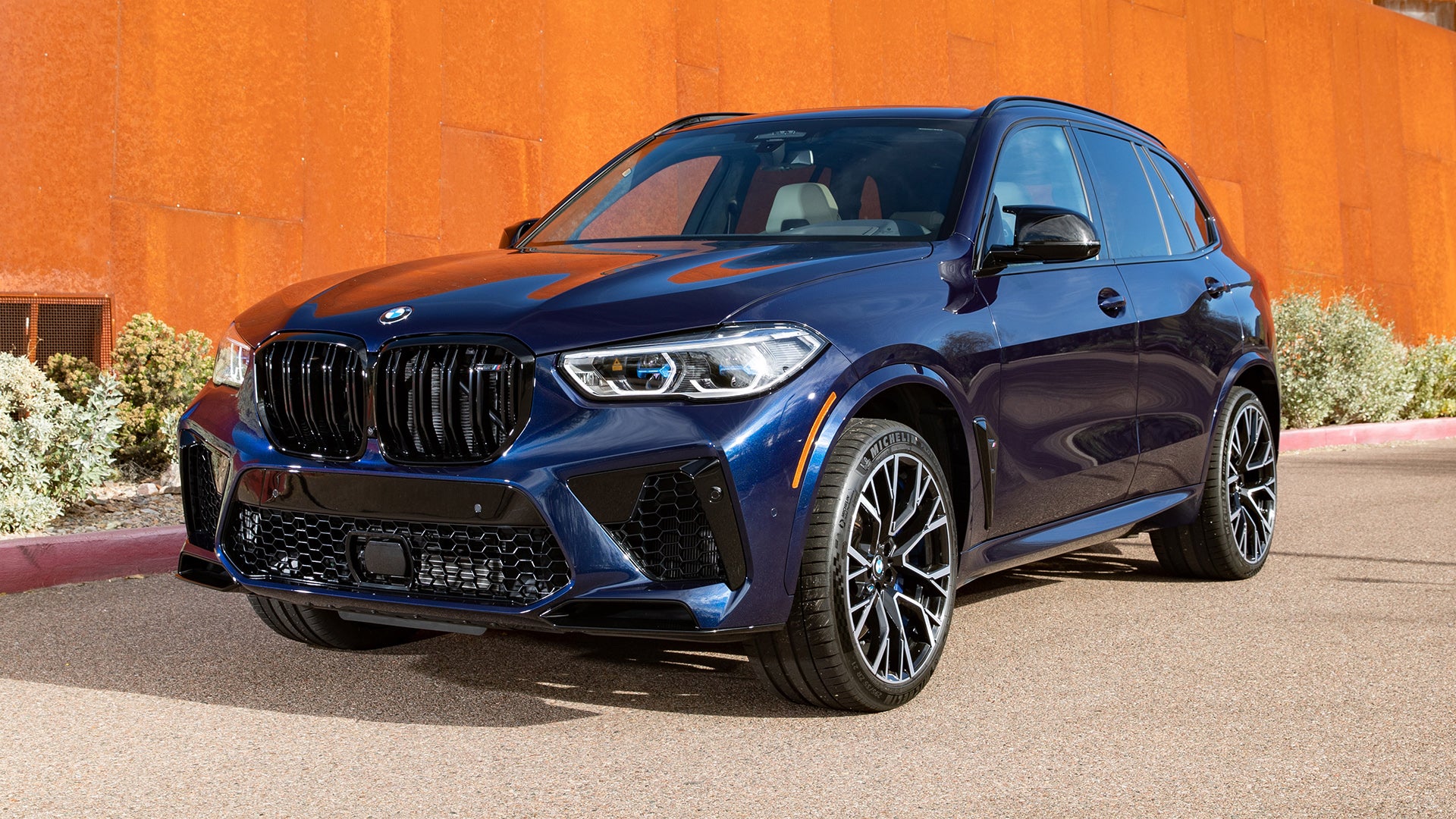 The changes largely revolve around engine cooling, fuel delivery and more efficient turbos that enable a more aggressive engine calibration. The result is a 33-horsepower increase to 600 hp for the base X5 M and an additional 17 hp for the 617-hp Competition. The peak torque remains unchanged at 553 pound-feet, but the new turbos maintain that from 1,800 to as high as 5,860 rpm instead of the previous 2,200 to 5,000 rpm. BMW says that 60 mph is just 3.8 seconds away (3.7 in the Competition), and those numbers are utterly believable from behind the wheel.

The engine doesn’t give away much of this potential at startup, where it is calibrated to be inoffensive on quiet mornings or when start-stop is in regular use. It’s also a cinch to motor around town smoothly because the throttle is notably less jumpy than the last X5 M, even in Sport mode. But don’t let all of this practical talk fool you. The advertised power comes on strong when you’re feeling impractical, and it comes in an impossibly steady wave.

As before, that power flows through an 8-speed Steptronic automatic transmission. There are three selectable shift programs that are progressively sportier, or you can use the generously-sized shift paddles in manual mode. Next up is the M xDrive all-wheel-drive system, which is nominally rear-biased but continuously alters the front-rear torque split as needed. Rear-axle output continues through an Active M rear differential, which employs an electronically-controlled multiplate clutch to regulate the differential’s locking action.

You’ve probably never heard of Yarnell Hill, a lightly traveled grade that clings to the side of a granite mountain in rural Arizona. Its uphill and downhill lanes are separated and deliver very different challenges, which makes it a great place to size up a vehicle like the X5 M Competition.

The uphill climb consists of two lanes of smooth, sweeping turns that make this leg more about the chassis itself than the ultimate power of the V8 engine. These corners don’t ask much of the brakes but do lean heavily on the front tires. Here the new X5 M makes good use of its slightly wider front tires (295 mm vs 285 mm last year) and slightly narrower rear ones (315 vs 325). Turn-in is direct, and the balance is spot-on. There’s not a whiff of understeer. Body roll never rises to a noticeable level because Active Roll Stabilization can overdrive the stabilizer bars as needed. Mid-corner grip is heroic, but it's not clear how it might be different if this were a regular X5 M. Both share the same 295/35R21 Michelin Pilot Sport 4 S front tires, but my Competition has forged wheels and larger 315/30R22 tires. A regular X5 M would have cast wheels and 315/35R21 rear tires. 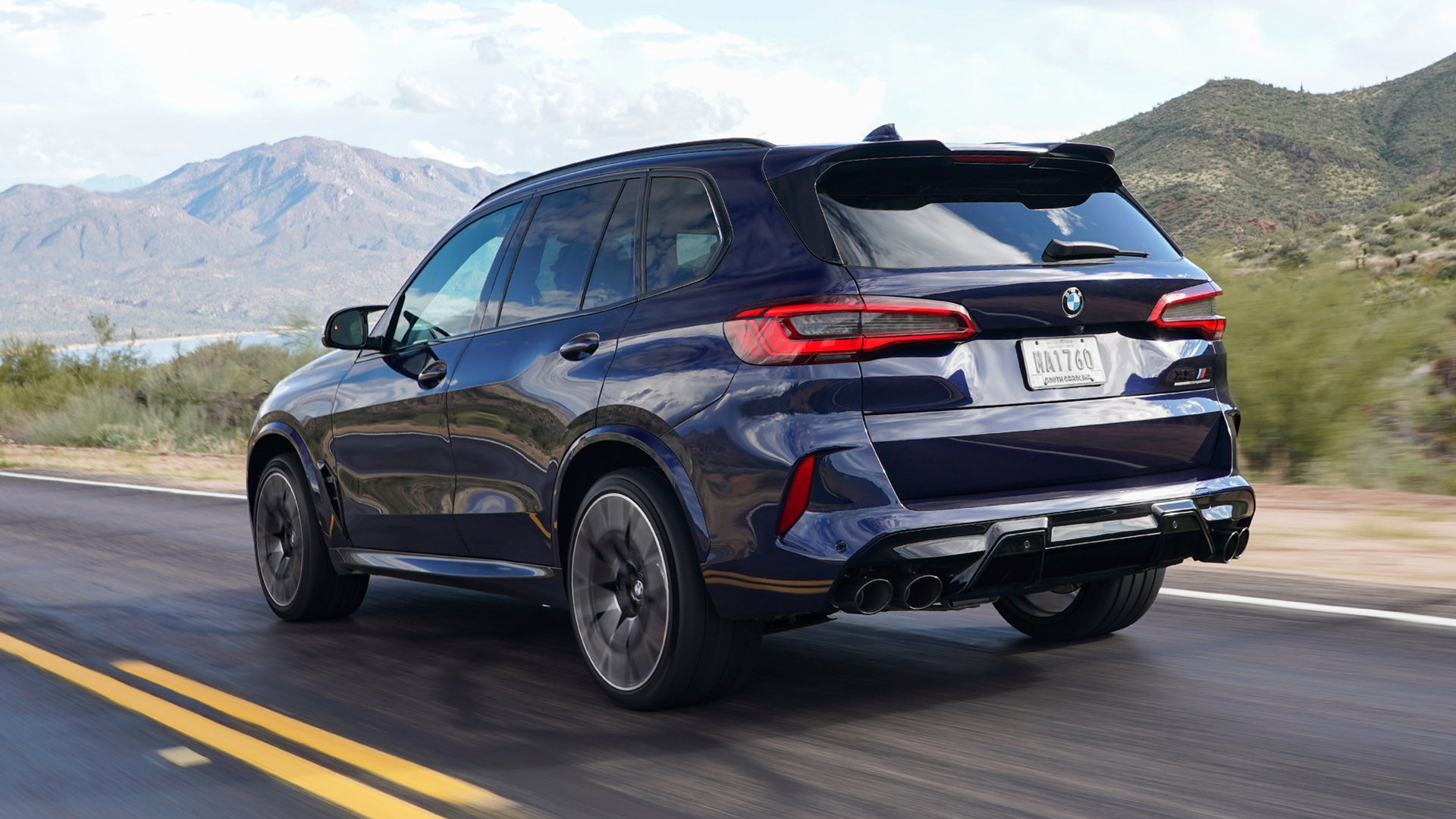 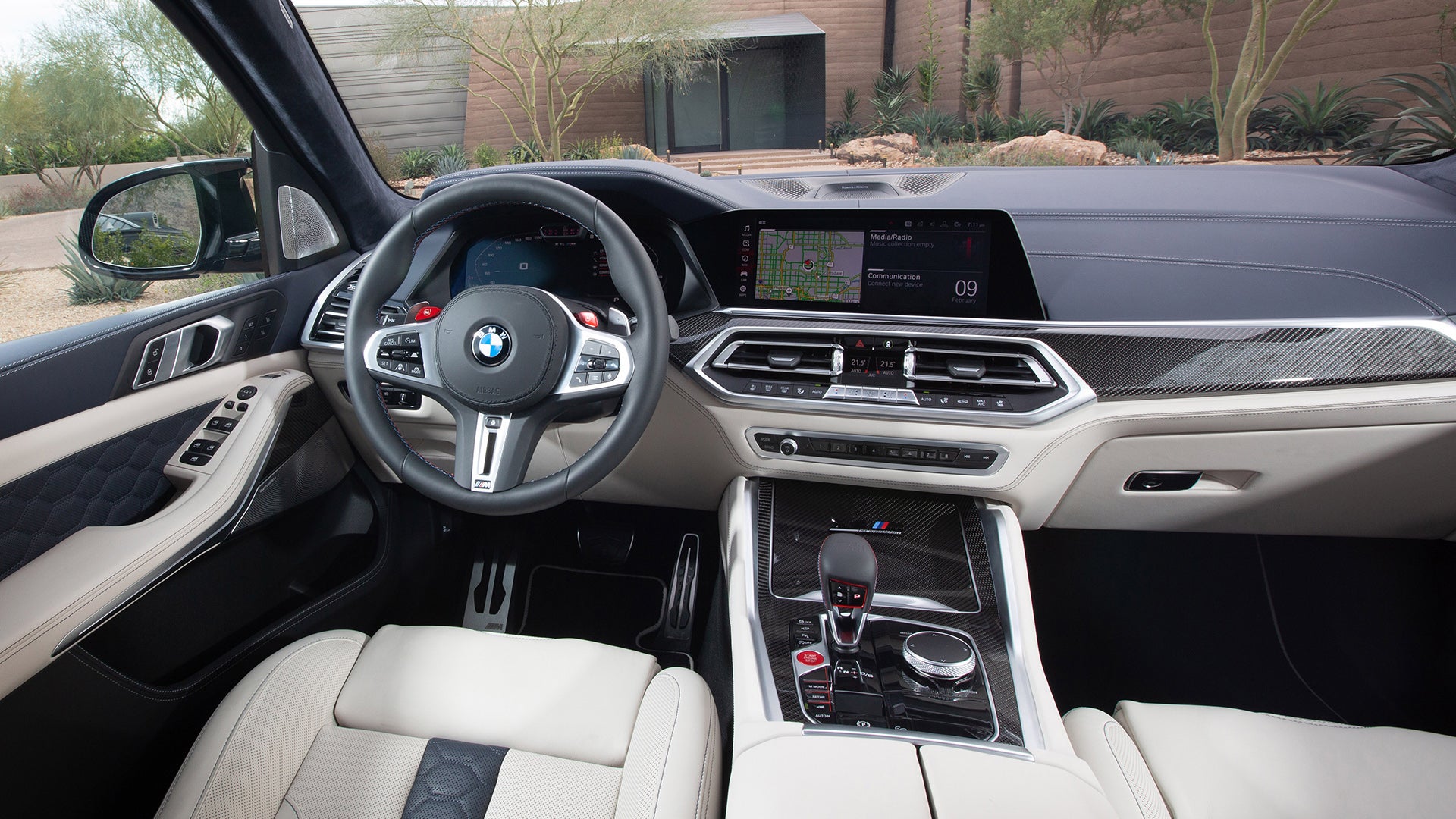 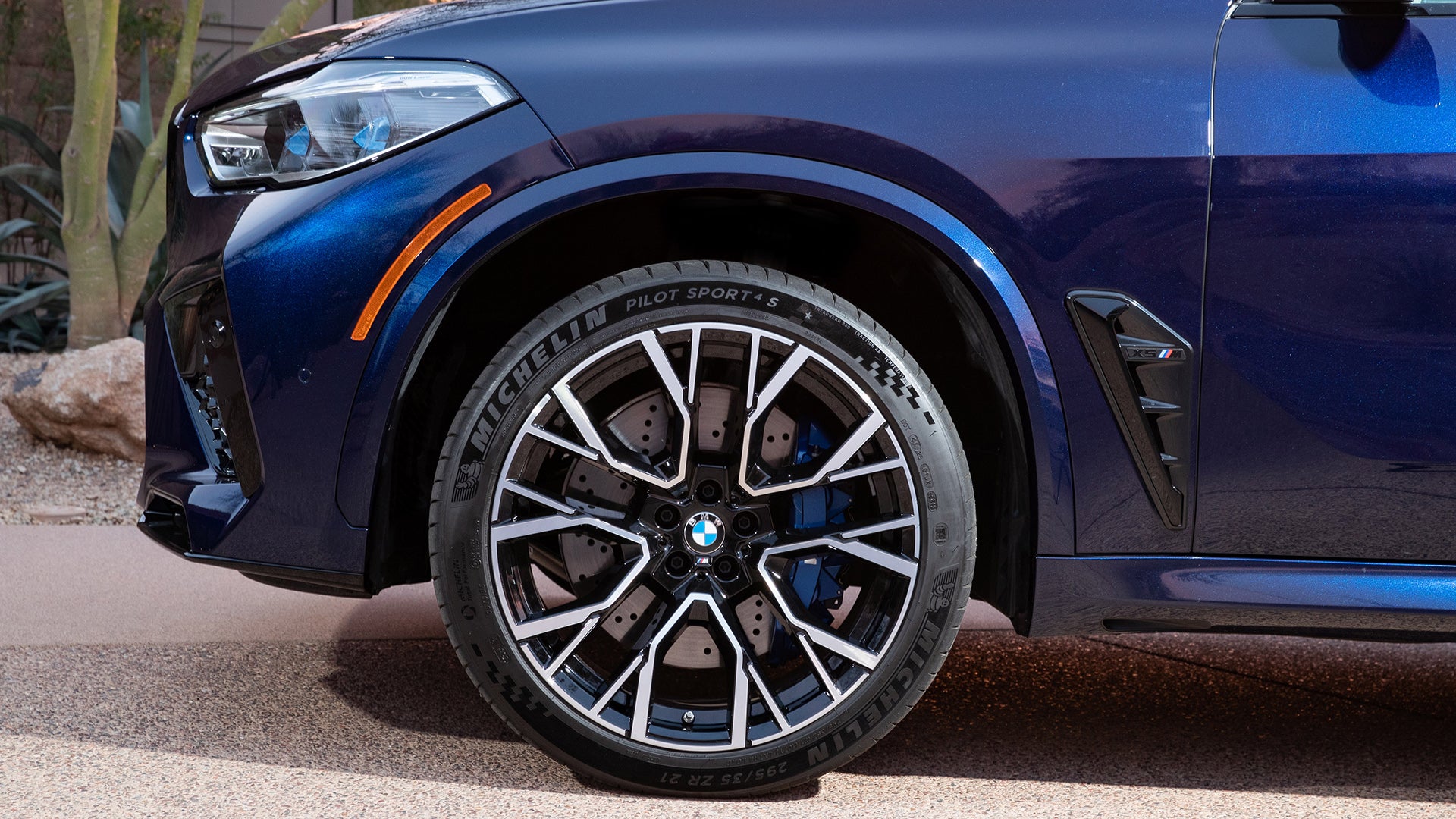 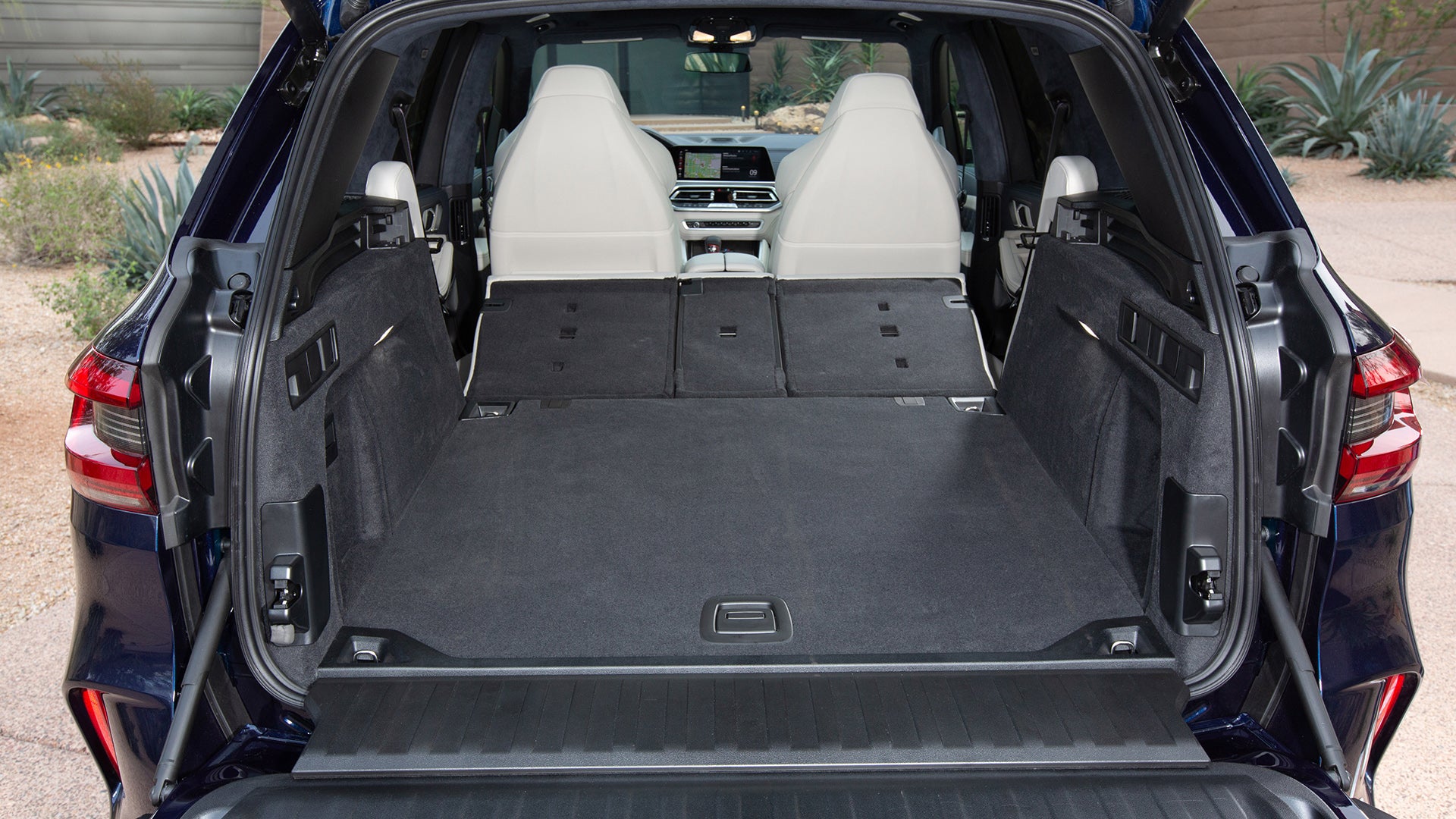 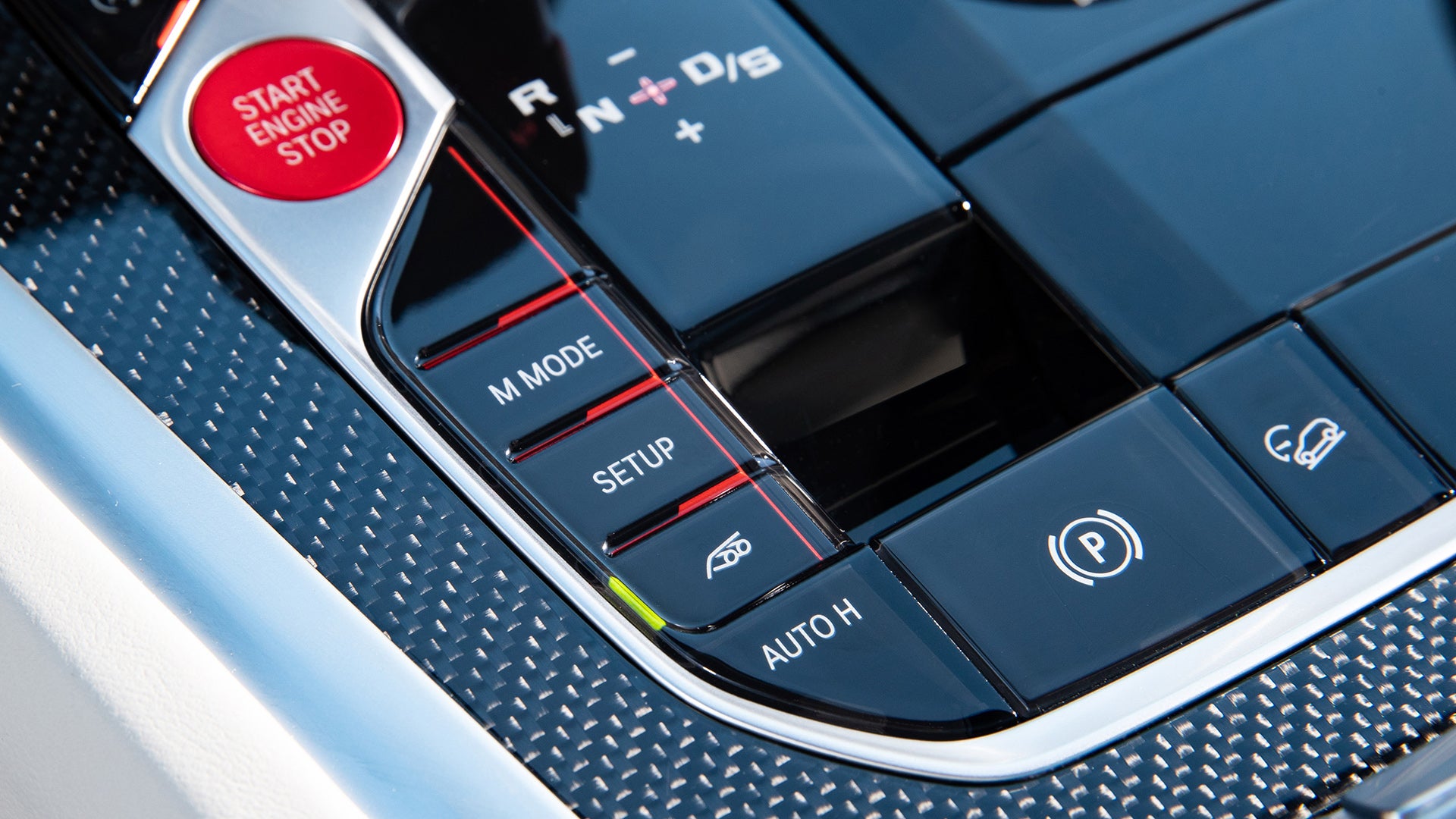 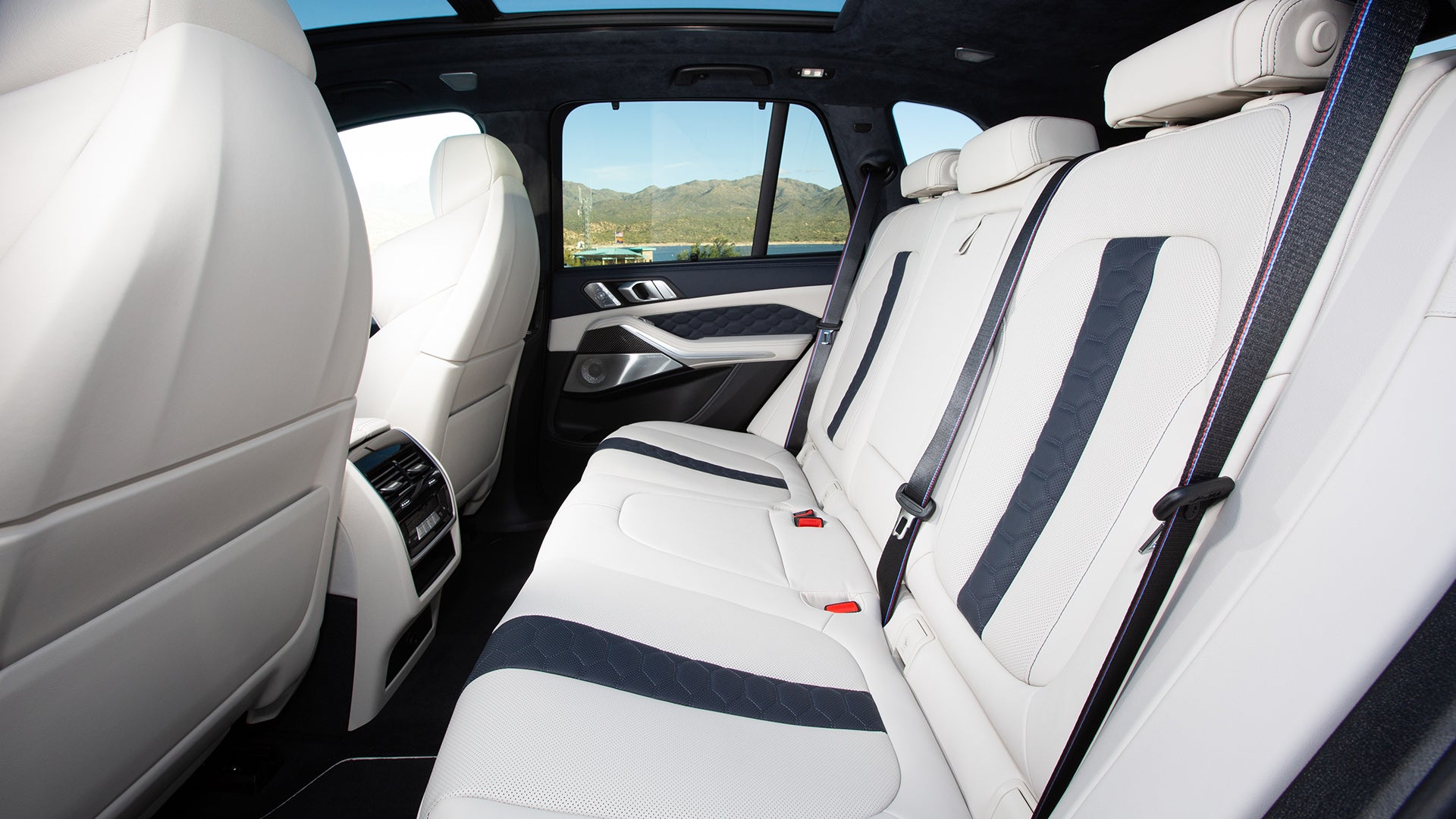 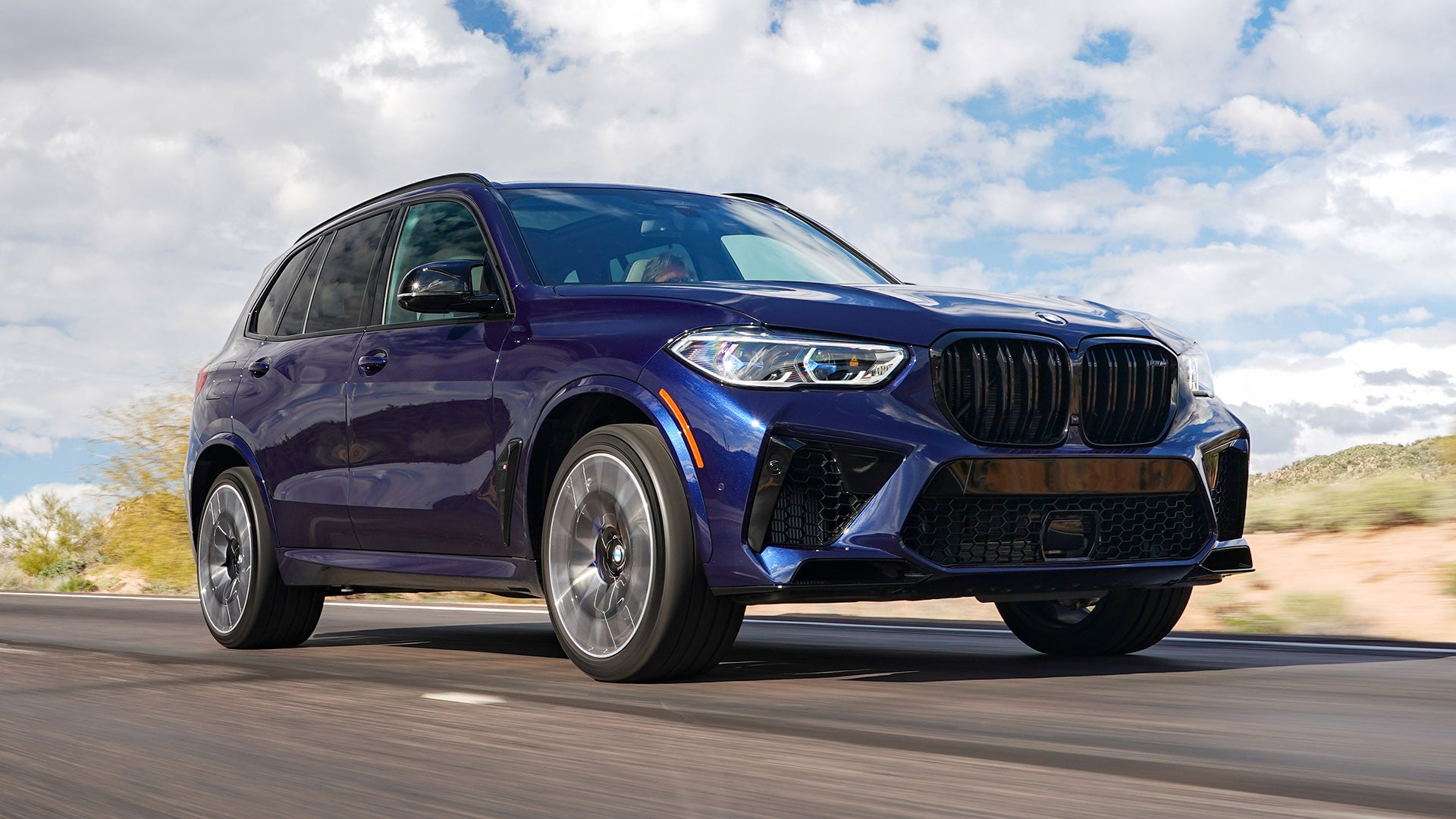 Speed limits being what they are, it’s best not to hammer the gas out of the larger sweepers. But there’s more room for creativity out of the tighter ones, and here is where the Active M differential’s electronically adjustable locking action pays dividends. Through it all the seats do an especially good job of clamping me in place, but the bolsters are never overly confining and can be easily moved aside into a cruising position when the road straightens.

Different aspects of the chassis come into play on the way down, which is just one lane wide and tightly hugs the cliff face. Here the corners are much tighter, the speeds slower, the brakes absolutely critical. The grip of the wider front tires is crucial here, but the unexpected bit is how smooth, consistent and easy to modulate the brakes feel when used aggressively.

I didn’t expect this because the X5 M has an Integrated Braking System, a hybrid-style brake-by-wire system (with a hydraulic backup) that monitors pedal position, application rate and the pressure developed within a hydraulic cylinder to interpret your demands and pass them on to the ABS module. Such systems were a necessity on EVs and hybrids because they must constantly blend varying amounts of friction and regenerative braking.

Manufacturers are starting to deploy this technology to their mainline cars because it can deliver impeccable feel if you get the software right, as BMW has here. This is also how the new X5 M can offer two selectable brake feel modes, but I’m not convinced that’s not simply a case of adding an adjustment for adjustment’s sake.

The tight corners also shine a light on what might be the most noticeable single change to the 2020 X5 M. Last year’s variable-ratio rack had a nominal value of 17.9:1, but now it’s 13:1. This comes into play everywhere, but hairpin corners and tight twisties like these really highlight the fact that there’s rarely a need for regripping or shuffle-steering outside of a parking lot. It also helps that the M’s steering wheel rim is chunky and easy to grip.

Significant chassis bracing has been added to the M models to take full advantage, and a lot of that is easy to see when you open the hood.

The ride back to the hotel is fairly smooth and comfortable, but the firmness of the suspension does come through. The electronically controlled dampers and stabilizer bars help to take the edge off, but the amount of road feel may still be too much for some, even in Comfort mode. Last year’s rear air suspension has been replaced by coil springs, but it's not the obvious culprit.

It’s also sobering to watch the gas gauge. The 2020 X5 M’s 21.9-gallon tank is a half-gallon smaller than before, and its rated fuel economy of 15 mpg combined (13 city/18 highway) is one mpg worse across the board. Gas money won’t be the issue for those that can afford one of these, but the likelihood of traveling fewer than 300 miles between fill-ups could annoy anyone.

I have mixed feelings about the sheer number of driver adjustments, which include engine, chassis, shift timing, steering feel, brake feel and the xDrive system. At least you can program two favorites and readily engage them by pressing the red M1 or M2 buttons on the steering wheel. These favorites can also remember preferences for the on/off status of the DSC system, the engine start/stop function and the exhaust system’s sound control flaps.

What About the X6 M?

The differences between the X5 M and the X6 M can be judged by eyeballing the styling, sitting inside, and considering the extra $3,500 you’ll pay for an X6 M. The powertrain is exactly the same and the driving dynamics aren’t noticeably different, while the weight difference is just about 50 pounds less than the X5. Rated fuel economy and estimated 0-60 mph times don’t differ at all.

The styling’s effect on cargo volume is obvious, but it affects overall cabin space more than you’d think because the roof is 2.3 inches lower. Front and rear headroom are down 1.4 and 1.9 inches, respectively, but rear legroom also gets dinged 1.7 inches because the sloping roof forces the seats closer together. I still fit back there, though, but it’s a tighter fit.

On the road, the closer proximity of the roof and pillars is palpable, whereas the X5 feels a lot more suited to my frame—as well as my frame of mind. The X6 also seems a bit more tense and unadulterated in ride comfort and road noise. It’s as if the interior cabin literally gives off a different vibe because of its resonance characteristics, and that’s very likely the case because of the X6’s smaller enclosed volume and different shape. But the difference is nothing like an actual deal-breaker.

The new X5 lineup has been impressive in terms its general layout, interior packaging, and its safety and convenience technologies since it emerged over a year ago, and all of the stellar build quality and sumptuous cabin appointments offered in the broader lineup are obviously available present here on the X5 M and the X6 M. Prices are up, but no more than you might expect for a fully redesigned new model.

There’s no denying the no-nonsense power of the X5 M and X6 M’s twin-turbocharged 4.4-liter V8 engine, and it's hard to imagine my feelings would be that much different if this had not been a Competition with the extra 17 horsepower. That said, the new Competition variants are pretty ferocious, and their forged alloy wheels and dual-diameter tire setup grips like anything.

And that’s pretty much all it needs to do to be successful. The buyer who lays down cash for one of these probably doesn’t own a helmet, but is instead the sort of person who wants something like an M5 Competition but needs an SUV. There’s always the Jeep Trackhawk, but that’s not in the same league. The new 2020 BMW X5 M Competition is a better no-compromise solution to that line of thinking than it ever has been previously.

I’m amazed at how tidy and nimble the X5 M Competition felt, even with its not-insubstantial mass working against it downhill into very tight corners. I’m no longer an eye-rolling skeptic.

Does that make it a good track-day candidate? I’m not quite willing to go that far. I can still think of 5,425 reasons why that might not work. But I’d love to try.

Dan Edmunds is a veteran automotive engineer and journalist with a background in motorsports. He also spent significant time as a suspension development engineer for Toyota and Hyundai at their respective proving grounds.