The New Mercedes-Benz E-Class Will Control Your Mind 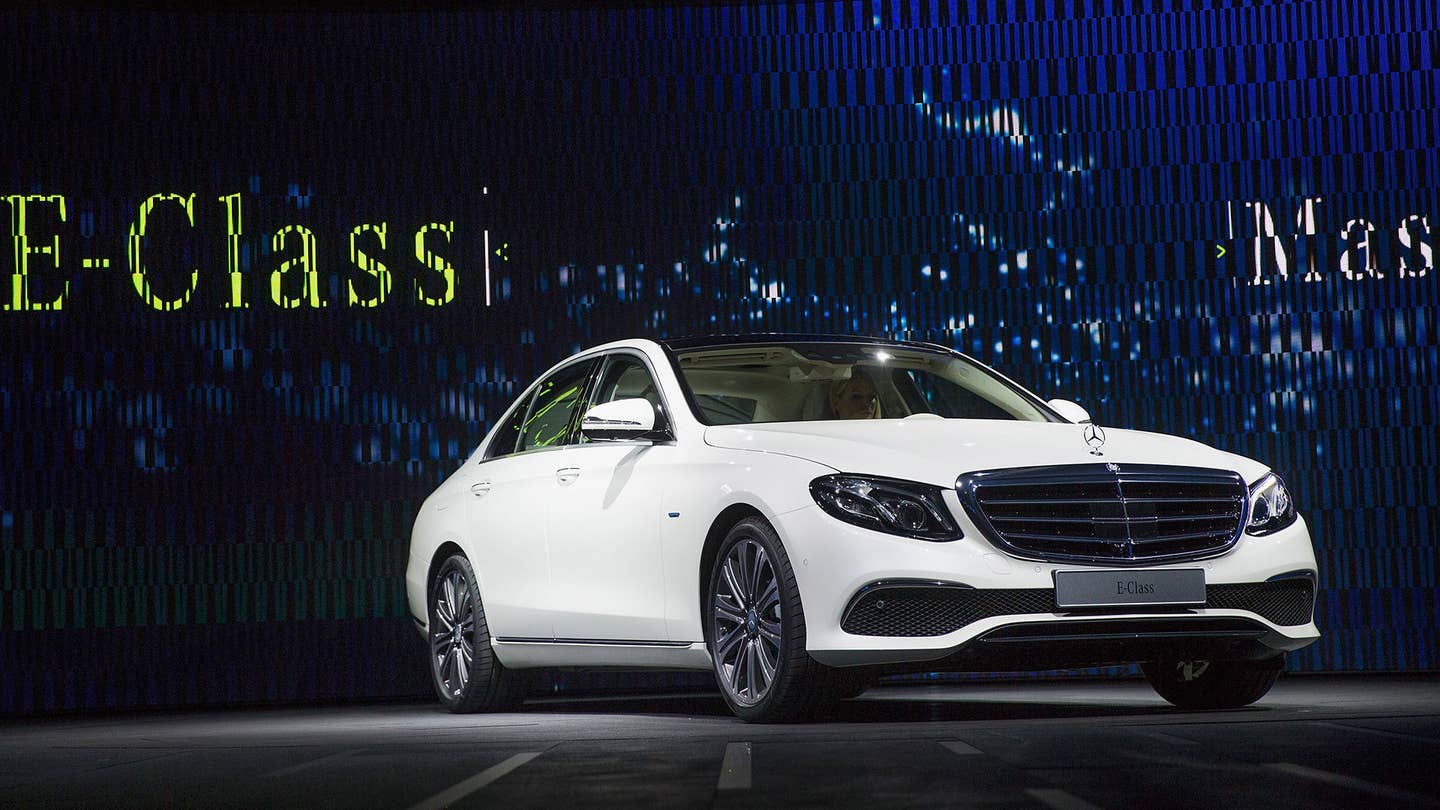 Gorden Wagener walks around the side of the all-new Mercedes-Benz E-Class, and nods his head in his loose and insouciant fashion. He is considering the long character line that runs the car’s length. The line is more straightforward than the ones on the latest S-Class and C-Class, the cars that bracket this middle child, and which Wagener, as the marque’s head of design, also took the lead in penning.

"It's the first time we've had what we call this 'catwalk line' that runs the full length of the car, dropping slightly toward the rear," he says. "It gives the car a very stretched structure and a nice, perfect rear-wheel-drive stance."

With the introduction of this latest model, which M-B has codenamed W213, the E-Class enters its 10th generation as a standard bearer, tracing its roots back to the businesslike “Ponton” sedan of the early Fifties. But, in a move that seems to harken back to the (glory) days of the brand’s beloved sedans of the Eighties, this may be the first time in decades that the three vehicles that comprise the core of Mercedes’ car business have such a consistent design language.

Architect Rem Koolhaas once categorized all of his projects into a thick, rectangular and exquisitely designed argent brick, a book called S, M, L, XL. Given the popularity of gray and silver in the luxury market, if we include the new Mercedes-Maybach stretch limos, the same could be said of Benz.

"It's definitely a connection to the Eighties and Bruno's [Sacco, M-B head of design during that era] lineup." Wagener says. "And it ties into our design philosophy. Sensual and pure. Modern luxury. Cool and hot."

Of course, the brand’s status and reputation is no longer based solely on its cars: It sold more mid-size M- and GLE-Class SUVs than mid-size E-Class sedans last year, likewise for large GL-Class SUVs vs. S-Class sedans. Moreover, what counts nowadays may depend as much on what is under that similarly sexy skin.

To this end, the all-new E-Class brings a crazy-making range of new safety and self-driving additions to its already capable autonomous suite. These include the car’s ability to steer and follow autonomously at higher speeds, regardless of how well a road is marked, to change lanes and help a driver perform evasive maneuvers, and to remotely park and unpark itself without the driver aboard (subject to the approval of our local regulatory agencies).

The new E can also emit 64 different interior ambient light colors, as well as some magical sound which, in the moment before a collision, triggers something in the brain called the “stapedius effect,” which apparently prevents hearing loss in the aftermath of a noisy crash. This sounds an awful lot like mind control. We hear and obey, robot master.

We ask Wagener how he goes about designing a car, knowing that the technology is, in some ways, going to take precedence over the appearance.

"I don't know if it makes a big difference," he says. "I mean, we showed with the F015 concept last year how much the exterior could change if a car could drive itself—if it became a mobile lounge. But we—or, rather, I—don't want the luxury car to become public transportation."

In the remaining moments before we’re shuffled off the Benz stage by security personnel, we ask Wagener about the brand’s other big unveiling, a refresh of the diminutive SLK roadster—one of our favorite Mercedes vehicles—and its rebranding with the iconic SLC moniker. It stands near the new S65 Cabriolet. Given Mercedes’ new reliance on the A, C, E and S monikers to denote size across their model range, and with the concomitant proliferation of convertibles in its lineup—we expect the new C- and E-Class coupes to drop their tops as well—we wonder if we can hope to see more roadsters joining the SL lineup. Maybe a tiny SLA to compete with the new Fiat 124?

"In principal, of course, you can imagine everything," Wagener says. "But we just confirmed at the press conference that the C-Class cabrio will come here. So we are pretty good on the open car side."