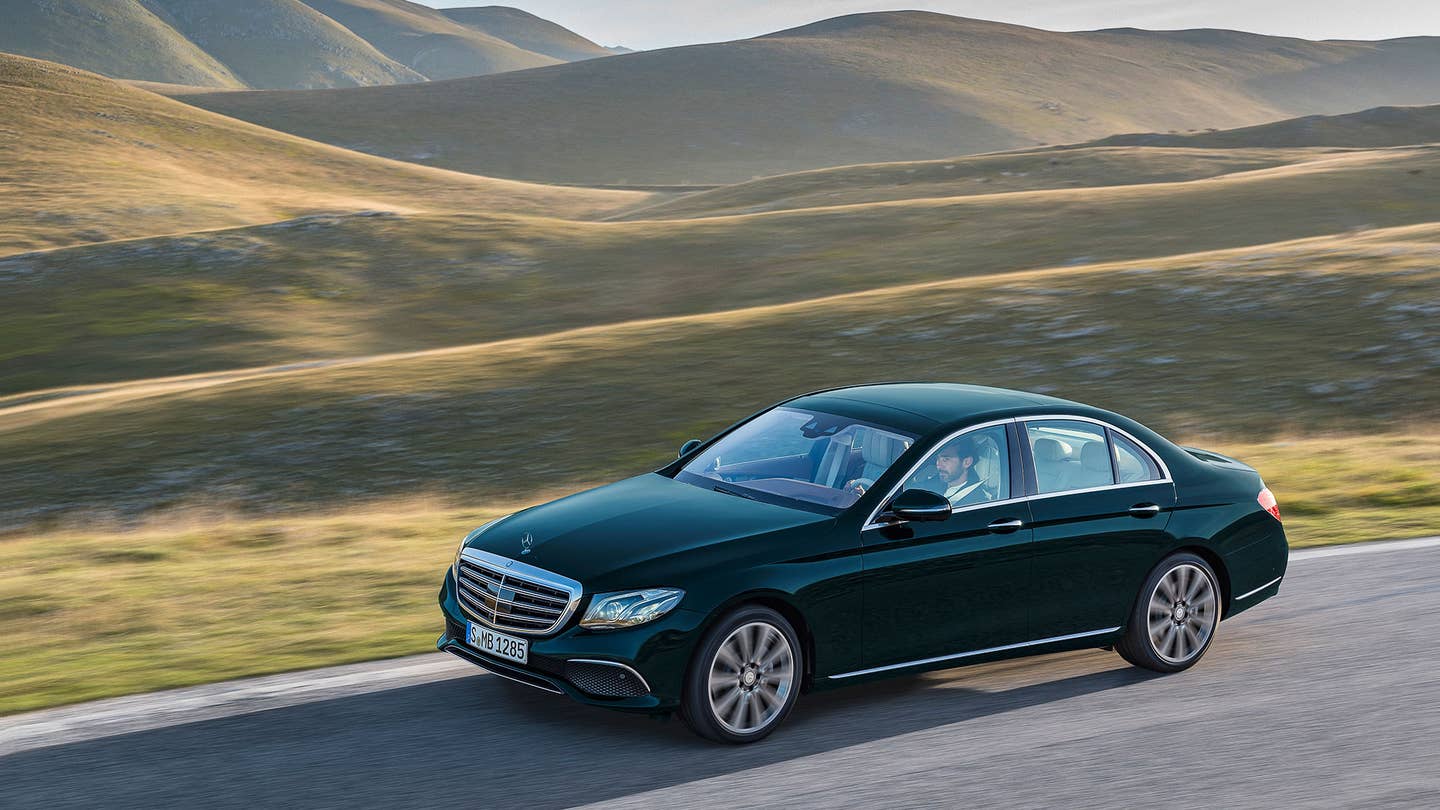 Mercedes just released details on the latest E-Class—the most popular luxury car in the world—and all signs point to Mercedes’ upcoming Just-Right Sedan being at the forefront of autonomous technology. Past Tesla, past Volvo, past even Mercedes’ own lordly and self-possessed S-Class. Lovers of the model—shouts to those of us who thrill at the sight of a late-Eighties W124 wagon in Champagne—will have plenty of time to enjoy the 2017 E-Class’s upgraded seats and natural-finish woods, because they won’t really be driving. Rather, the car will. It’s all very gee-whiz. Call it the E-Whiz.

Before sliding between the logic boards of Mercedes’ latest radar/camera/Baldur-the-Norse-God-of-Speed-assisted cruise control systems, let’s linger on the new car’s handsome wrapper. Like few others automakers—here’s looking at you, BMW and that radical ‘04 5 Series—Mercedes’ design department privileges a sense of continuity and familial resemblance above all. As such, the new E-Class looks like a lengthened, broadened C-Class, itself an S-Class in miniature. The partly aluminum skin adheres to Mercedes’ “Sensual Purity” language, which as far as we can translate, means smooth, muscular flanks, long hood, minimal detailing and LED slashes up front. The E-Class will be highly aerodynamic, but unlike the brand’s Concept IAA, the profile betrays none of that advancement. It’s handsome, but conservative, as E-Classes always have been, and likely always will be—at least, until mankind makes the jump from cars to pods.

Inside, the Medium Benz sports an enriched version of the C-Class’s already deluxe cabin: big swathes of low-gloss ash, swatches of rich leather (which Mercedes notes is “highlighted by various shades of brown”) and a staggering 64 color options for the low-watt ambient LED lights hidden throughout the cabin. A huge, 12.3-inch infotainment (forgive us, OED) screen is the technological centerpiece, though the reconfigurable digital gauge cluster is a close second. In an automotive first, the steering wheel harbors little touch pads; a third larger version lives on the center console.

Under all that material, the E-Class has fancy guts. Mercedes’ stellar Air Body Control—heretofore reserved for the top-line S-Class—makes its way into this car, a first for the segment. In concert with a nine-speed transmission, that optional set-up ought to mimic the whooshy comfort of the bigger Benz. At launch, only the E300 will be available, featuring a 2-liter, 241-horsepower four-cylinder, though turbocharged V6s, diesel and gasoline, plus a shouty AMG V8 are surely in the pipeline.

Now, to the car’s technological psyche—all that equipment that will allow it nearly to drive itself. Cruise control, at this point, is outmoded: It implies highways and clear roads, whereas today’s systems duke it out on crowded city streets and winding country lanes. At the forefront of the E-Class’s newness is “Drive Pilot,” a semi-autonomous system that not only maintains a selected distance from the vehicle ahead but can actually follow its movements up to an autobahn-ready 130 mph. Beyond braking and acceleration, the system will also provide what Mercedes is calling “plenty of steering assistance.” That is, the car will take the wheel. And, unlike older systems which require clear road lines, Mercedes’ new computer takes account of surrounding vehicles and roadside features to determine a path. “Evasive Steering Assist” torques the steering wheel to help avoid pedestrians and subsequently straightens the car. In a move straight out of James Bond’s Tomorrow Never Dies 1997 BMW 750iL, the 2017 E-Class will be able to be slipped in and out of garages and parking spaces remotely via an iPhone app. The days of sucking in your gut and smearing your tush across someone else’s door as your attempt to duck into your car are, blessedly, over.

That’s the 2017 E-Class: a car you pull out of the garage with your phone, a car whose interior lighting you set with a finger tap and whose path isn’t determined so much by human hands and foresight as a roster of subcutaneous supercomputers and more radar than a Nimitz class aircraft carrier. In a testament to the power of our digital age, the least exciting part of this expensive German luxury car is its engine. As with the classic duck metaphor, though the surface of the E-Class is a glassy, unflustered homage to the model’s half-century stolid ancestors, underneath is a riot of 1’s and 0’s clicking madly (silently) to thread the car down the one safest route. That’s big. The new E-Class is what Mercedes is calling, without caveats, the “most advanced car” in its portfolio.

That means, in a rare upset, the S-Class will stand in the shadow of the E-Class. Mercedes wouldn’t perturb such a balance unless this tech were too good to hold onto. Sounds like it is.