2020 Honda CB650R Review: The Right Salve for These Chaotic Times

It's back to basics with the CB650R, which is exactly what you need right now. 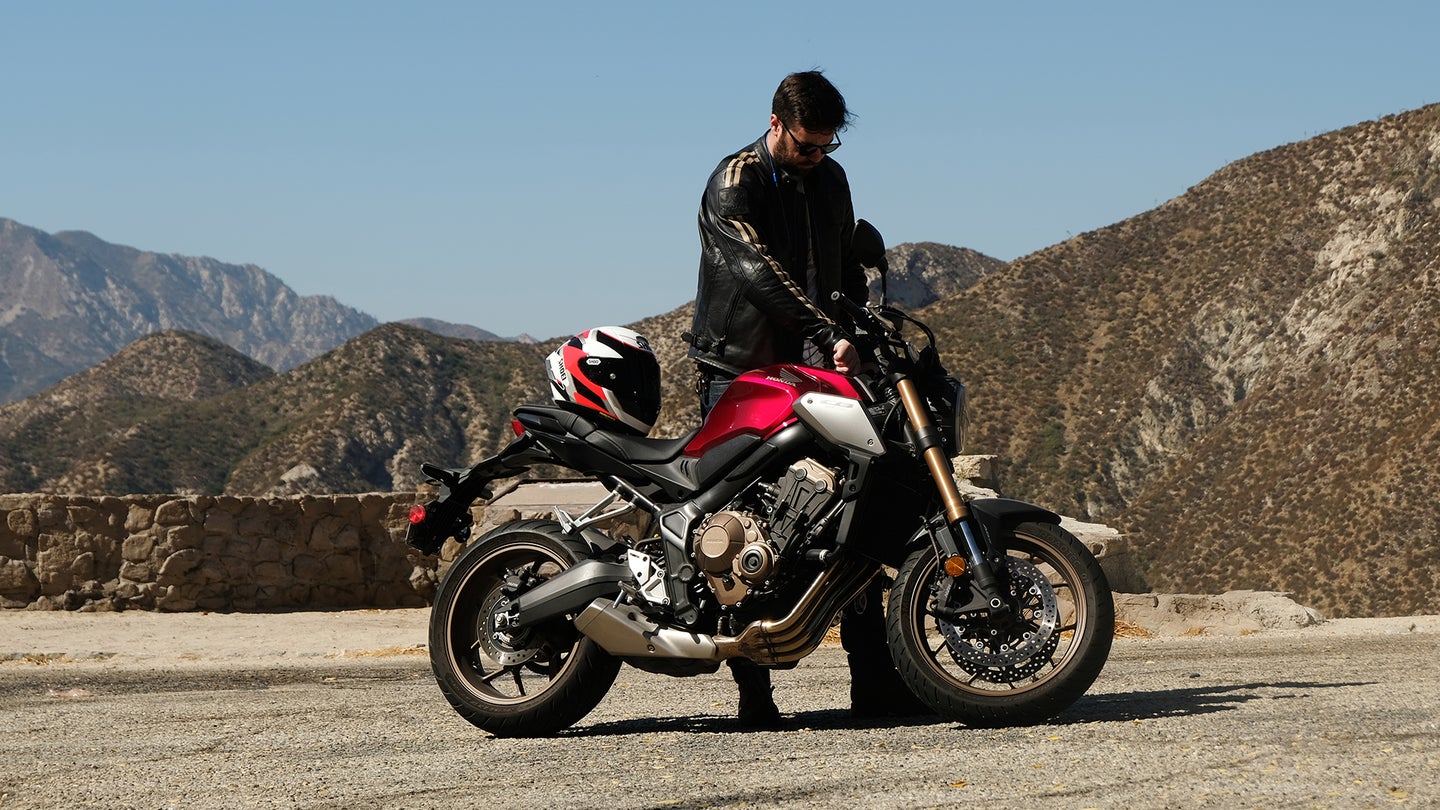 Motorcycles are meditative objects capable of clearing life’s chaos and worry by the simple fact that if your mind wanders, you die. That sounds like metaphysical bullshit, something from a man who’s too into crystals with #livefortoday splattered across his Instagram. Yet, when something like the 2020 Honda CB650R comes along, you learn to embrace each moment with a hippyish zeal, even when life is throwing curveballs.

The entry-level sport cruiser came to me at a time in 2019 where mental clarity was in short supply. A couple weeks before the CB650R showed up, a friend tragically passed away during a solo motorcycle trip (though not in a crash). A few weeks before that, another friend was seriously injured on a bike when a drunk driver plowed into him at a stoplight. All the while, for the fourth time in my ongoing foster-to-adopt story, I'd once again become a father. Every risk on the road suddenly felt magnified. The deck was stacked against the Honda—as it would be if this was happening today amid the coronavirus outbreak

But the open road still tugged at me, and somewhat hesitantly, I put a leg over the saddle. And while the specs belie a machine that isn’t as addictive as others, Honda's CB650R is the purest distillation of motorcycling, a bike of simple joys that helped me feel comfortable riding once again. It’s what every motorcycle should try to emulate: Always able to deliver the freedom, tranquility, and perspective riders seek, whether they know it or not. 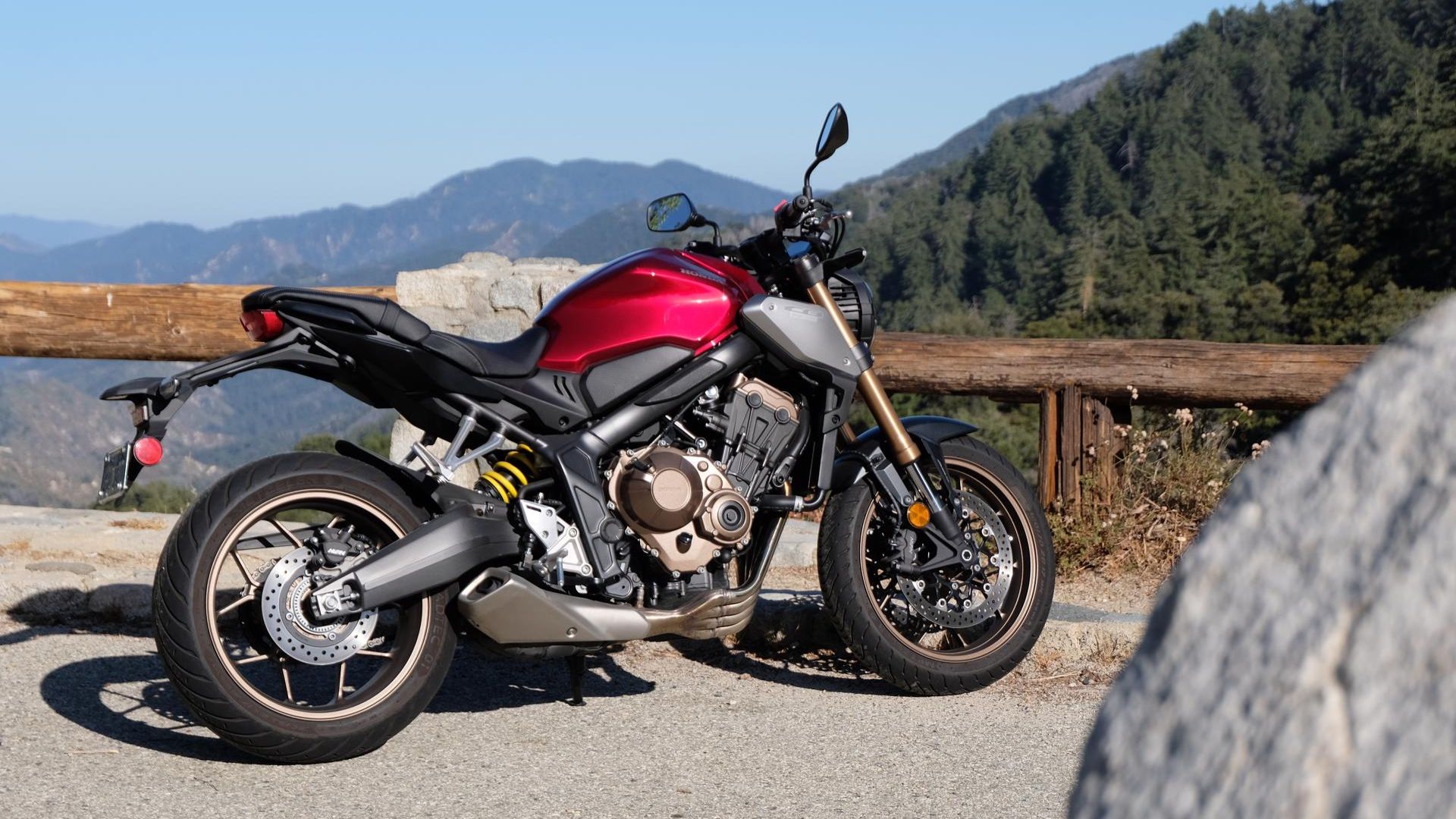 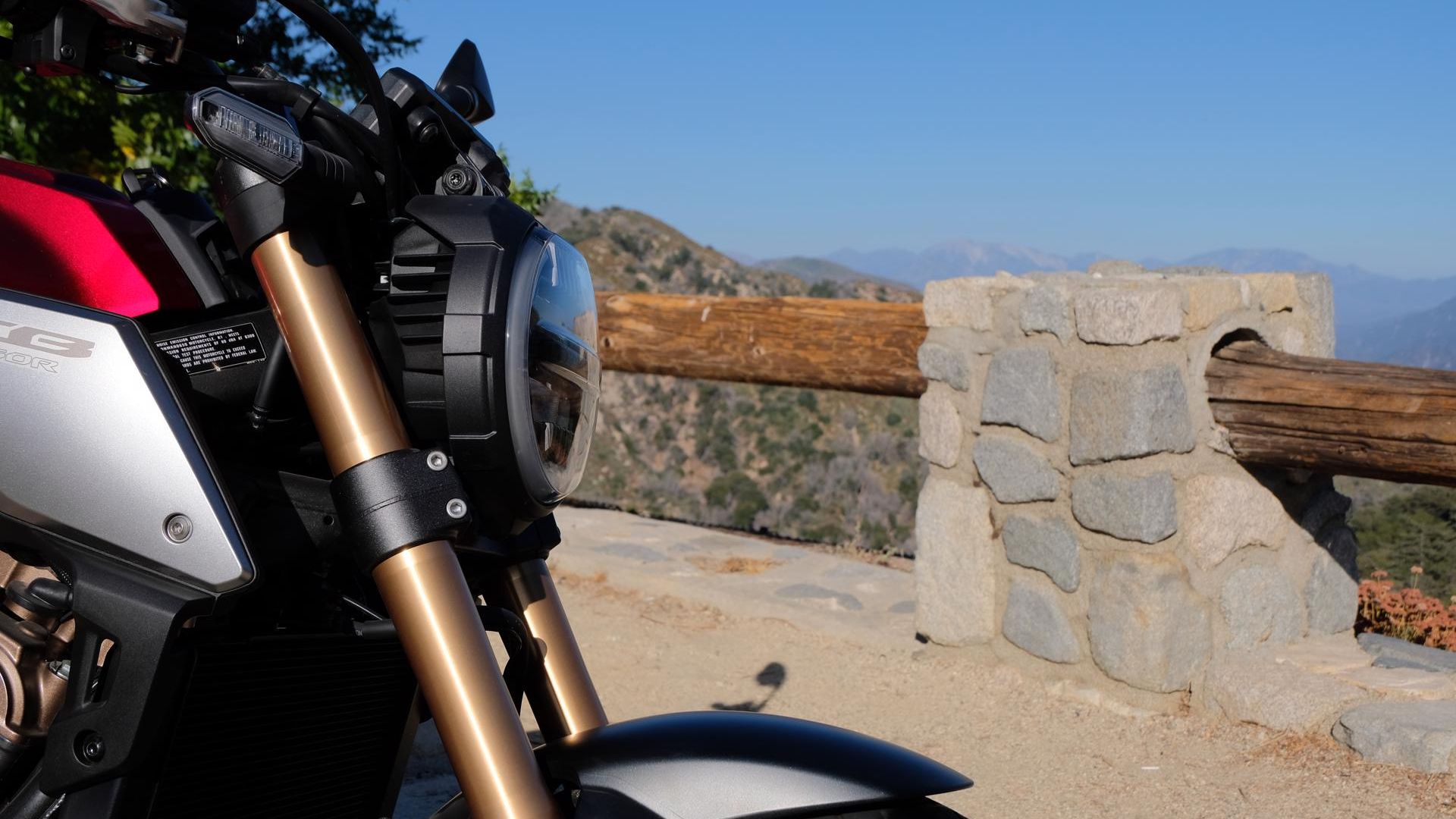 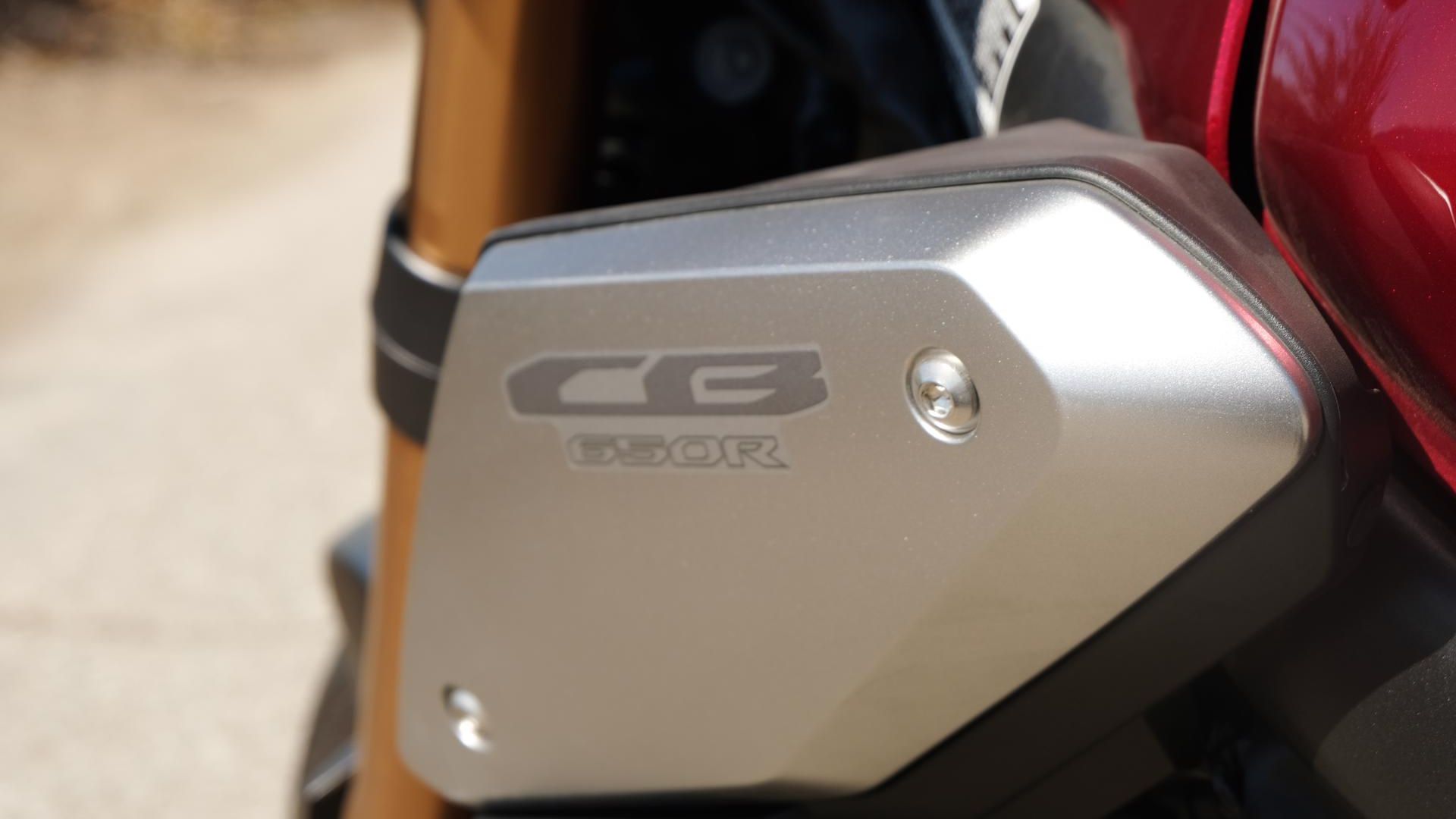 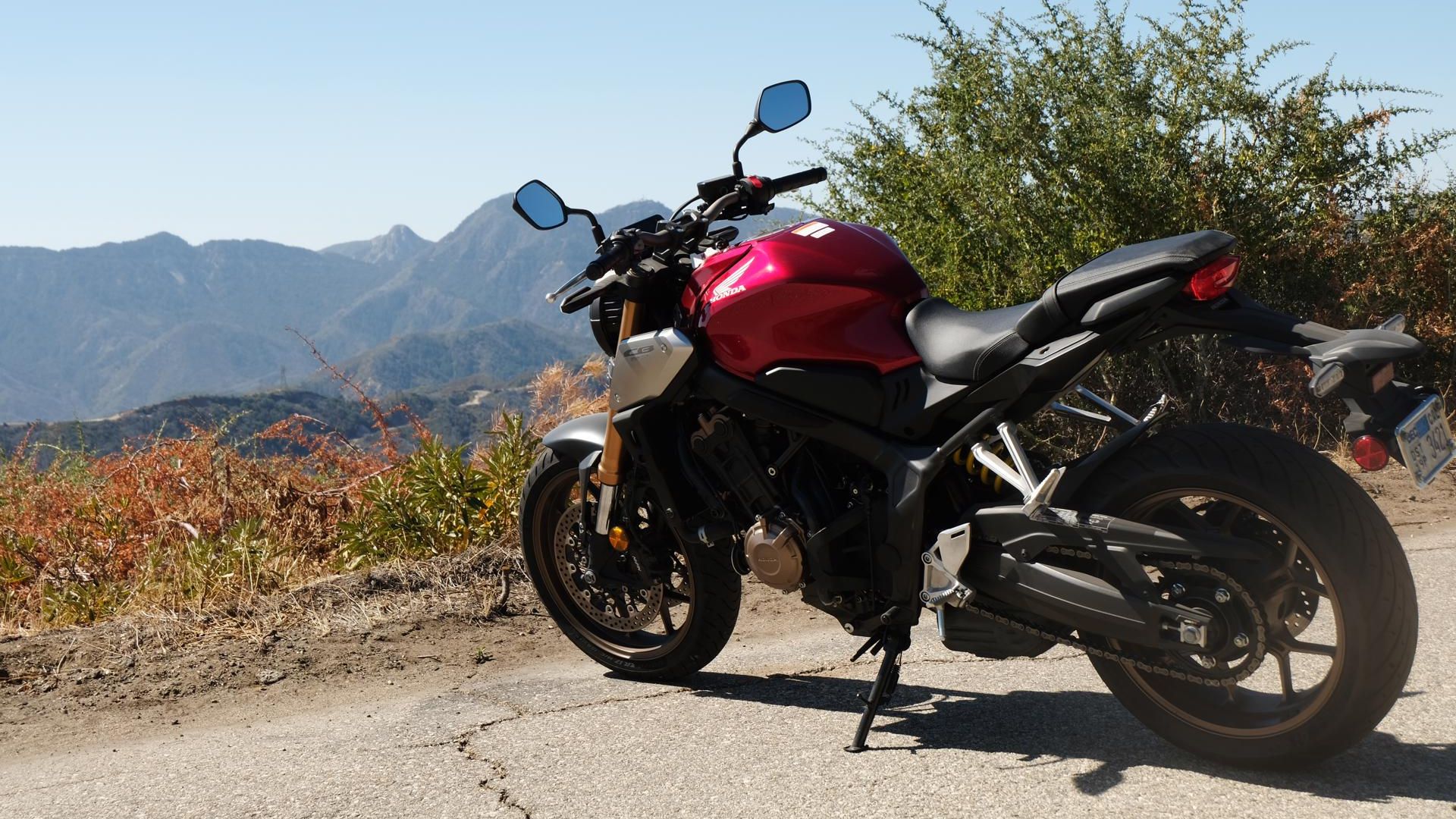 At the fringe of a desperate manhunt, I watched helplessly as the world searched for my friend and renowned automotive journalist Davey Johnson last spring after he disappeared while riding a motorcycle through northern California. A week later, the news I and so many others dreaded came in—while riding, Davey had stopped at a river and went for a swim, as he was wont to do. He never got out. It wasn't the middle-of-nowhere wreck we'd imagined, but his sudden, unexpected passing still felt like an earthquake that reordered things on a deep level.

A few weeks prior to Davey’s passing, another good friend was nearly killed when a drunk driver plowed into him and three others on their way home after a day of hard riding. All were wearing proper protective gear, and though his riding partners escaped with cuts and bruises, my friend wasn't as lucky. His head injuries have forever changed his life even as he continues an incredible recovery.

The short interval between both incidents meant that when I picked up the CB650R two weeks after Davey’s death, my thoughts dwelled on both men. I know the danger of riding. I found out firsthand years ago when I broke my shoulder, bruised my lung and spine, and took a nasty concussion while laying a Kawasaki Z1000 down on a canyon road. Bad, but the quarter-inch-deep gashes across my helmet told a story that could’ve ended much worse. These two men were comrades in arms, riders to their cores. And now neither would ever ride again. 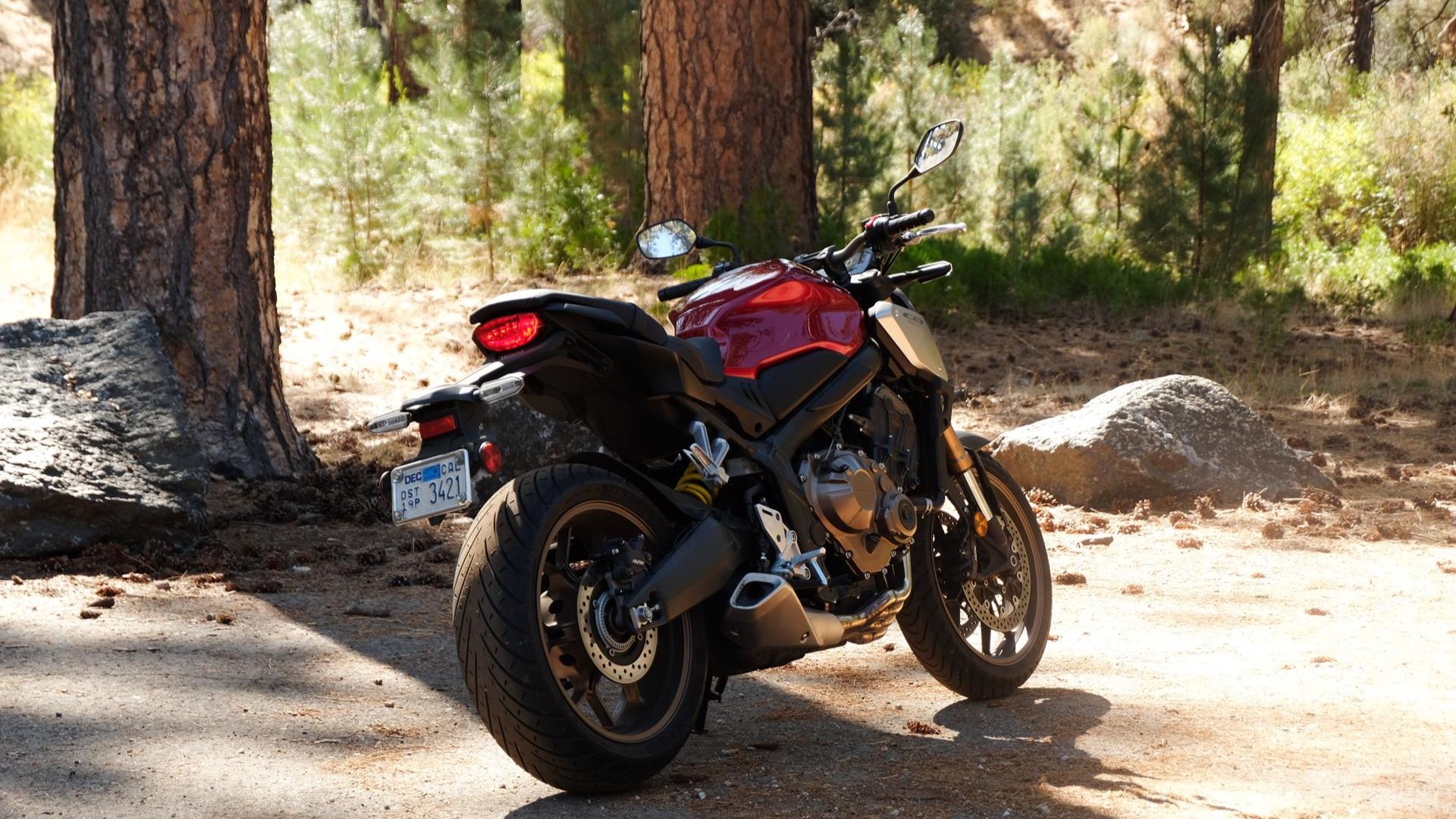 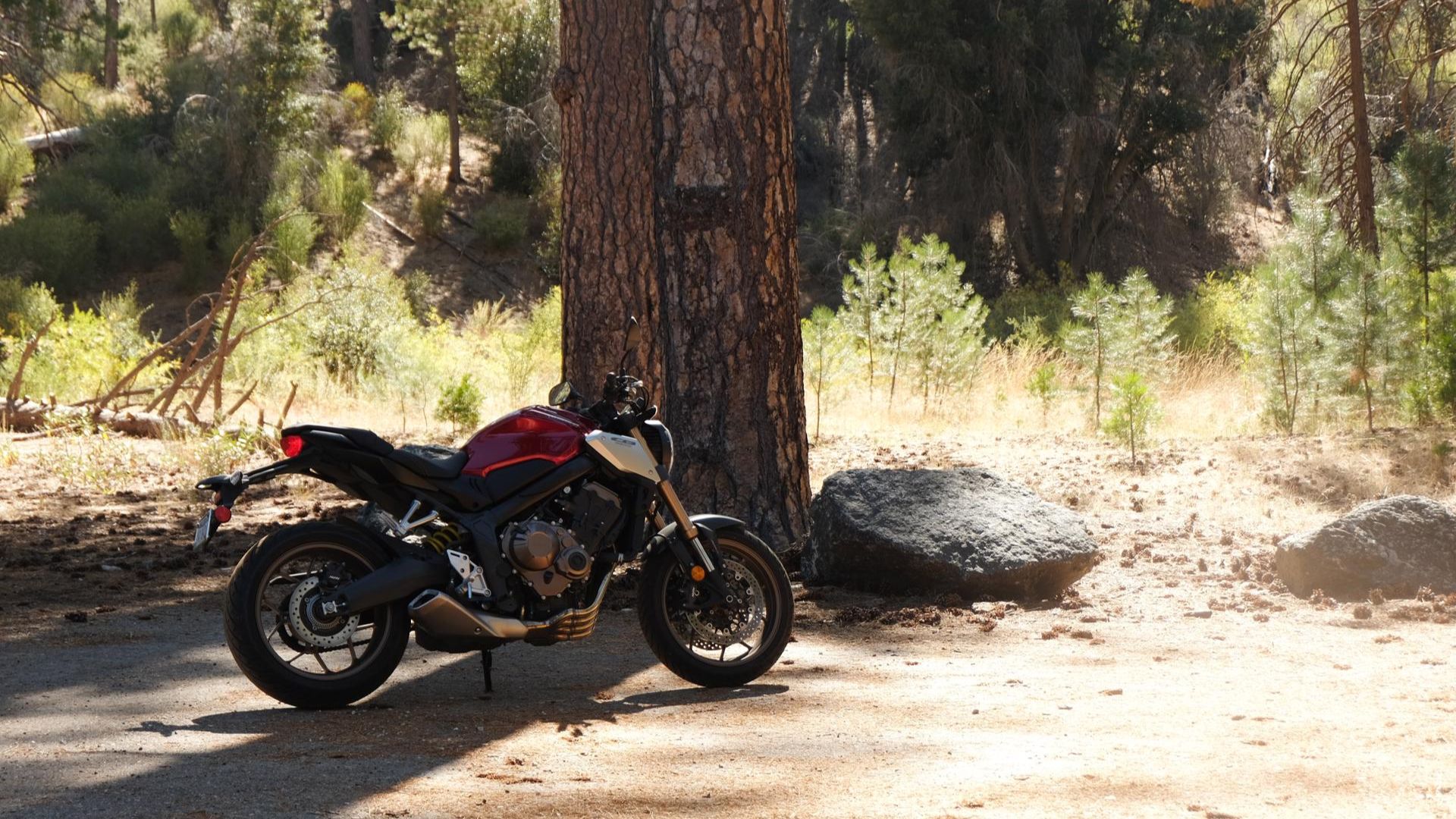 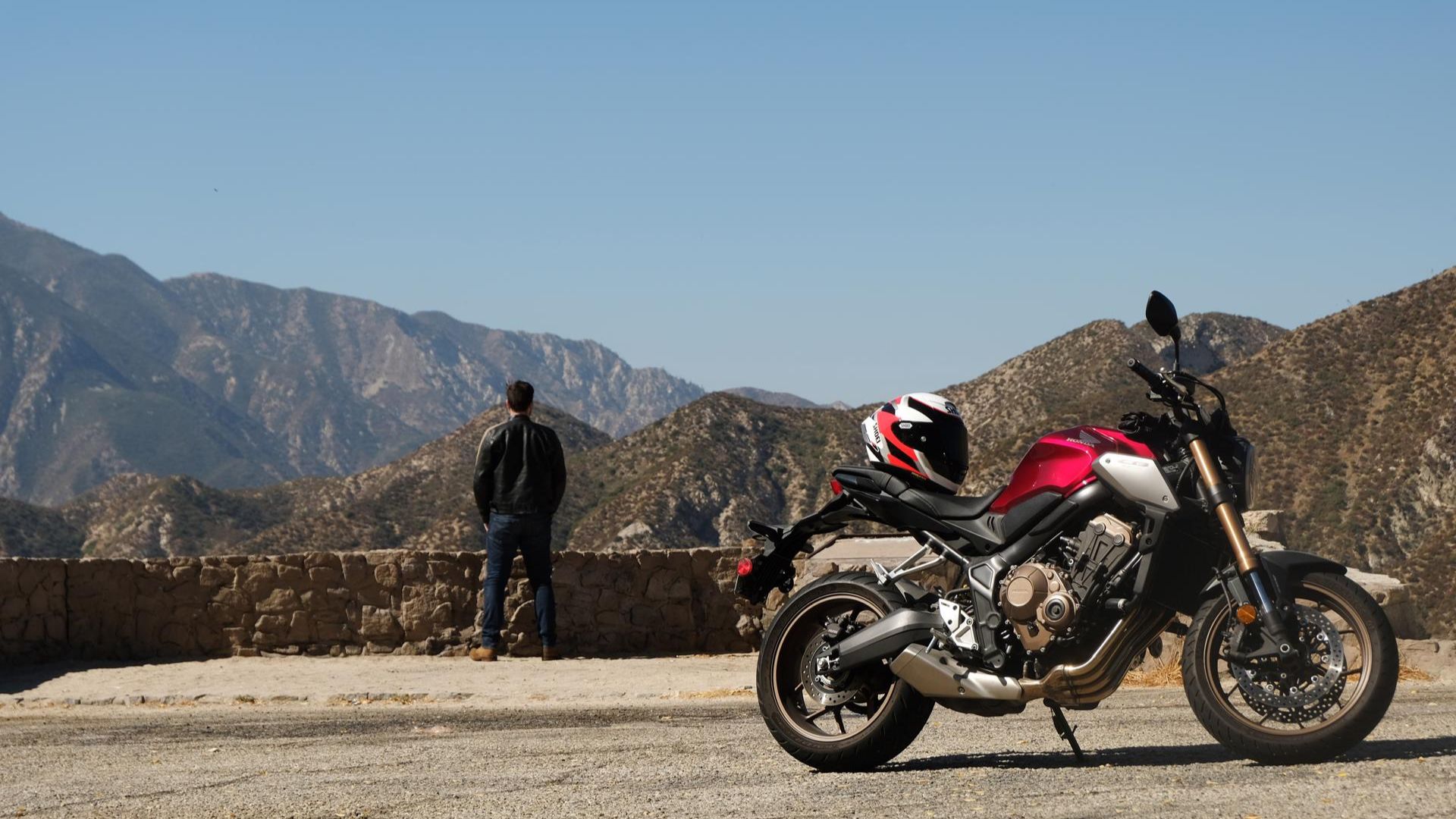 Adding to that anxiety of my first ride after all that were thoughts of my wife and kids. My heart skipped a few beats as thoughts about me going down rocketed around my head. What would they do if I never came home?

Riding tends to be an insular experience. It’s just you, the road, and your thoughts. There’s no texting, answering emails, crying children, crying adults, meetings, chores, or any of life’s tedium. But hopping on the CB650R that first time, all I felt was terror.

My thoughts dwelled on every single life-ending potentiality. I couldn’t do my job. Did the CB650R turn in quickly? Did it feel light and maneuverable? Was it heavy? Was there enough power? Was the experience fun or middling or terrible? I couldn't say. My thoughts evaporated as soon as they formed. The zen of motorcycling, and indeed one of the most fun parts of this job, was shattered. The ride ended early.

I let the CB650R sit for two weeks, during which time I talked to other friends who rode. They told me to take my time, to relax. But the best advice was to not push myself to get back into it if I wasn't ready, because if I did try and force it without keeping a cool head, I'd be in even more danger. Their pep talks helped, so gingerly, I got back onto the CB650R and pointed it toward the mountains.

Honda’s 2020 CB650R has all the right specs for a middle-weight motorcycle. Powered by a 649cc four-cylinder engine, and coupled to Honda’s always brilliant six-speed sequential manual transmission, the CB650R puts down what we’ll call 94 horsepower (93.9 according to Honda), and 47 pound-feet of torque.

That isn’t what anyone would call explosive, especially considering the bevy of brutes available in the segment, i.e. Ducati Hypermotard, KTM 790 Duke, Kawasaki Z650, and even some of the electric models that have begun to pop up. But where the CB650R lacks in power, it makes up for it in its chassis dynamics and weight.

Both motor and the Honda’s aluminum frame are integral chassis components, which, in addition to the Showa-sourced suspension and a full tank of fuel, give the CB650R a wet weight of 447 pounds. Dual disc brake rotors with four-piston calipers handle stopping up front, while the rear is serviced by a single disc, single-piston unit. Summed up, it’s the right recipe to get you riding when your comfort zone has moved miles away from where it once was. 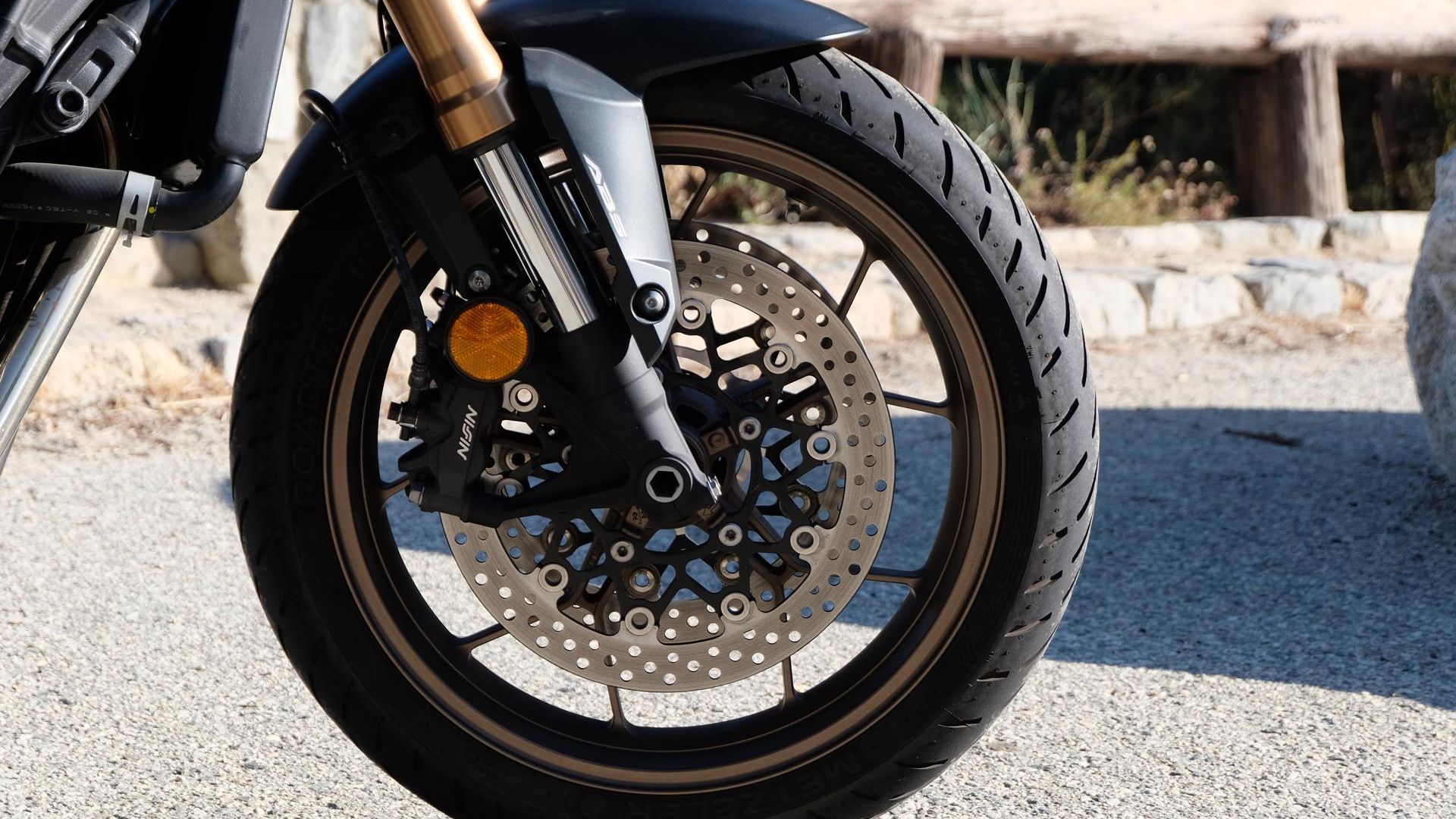 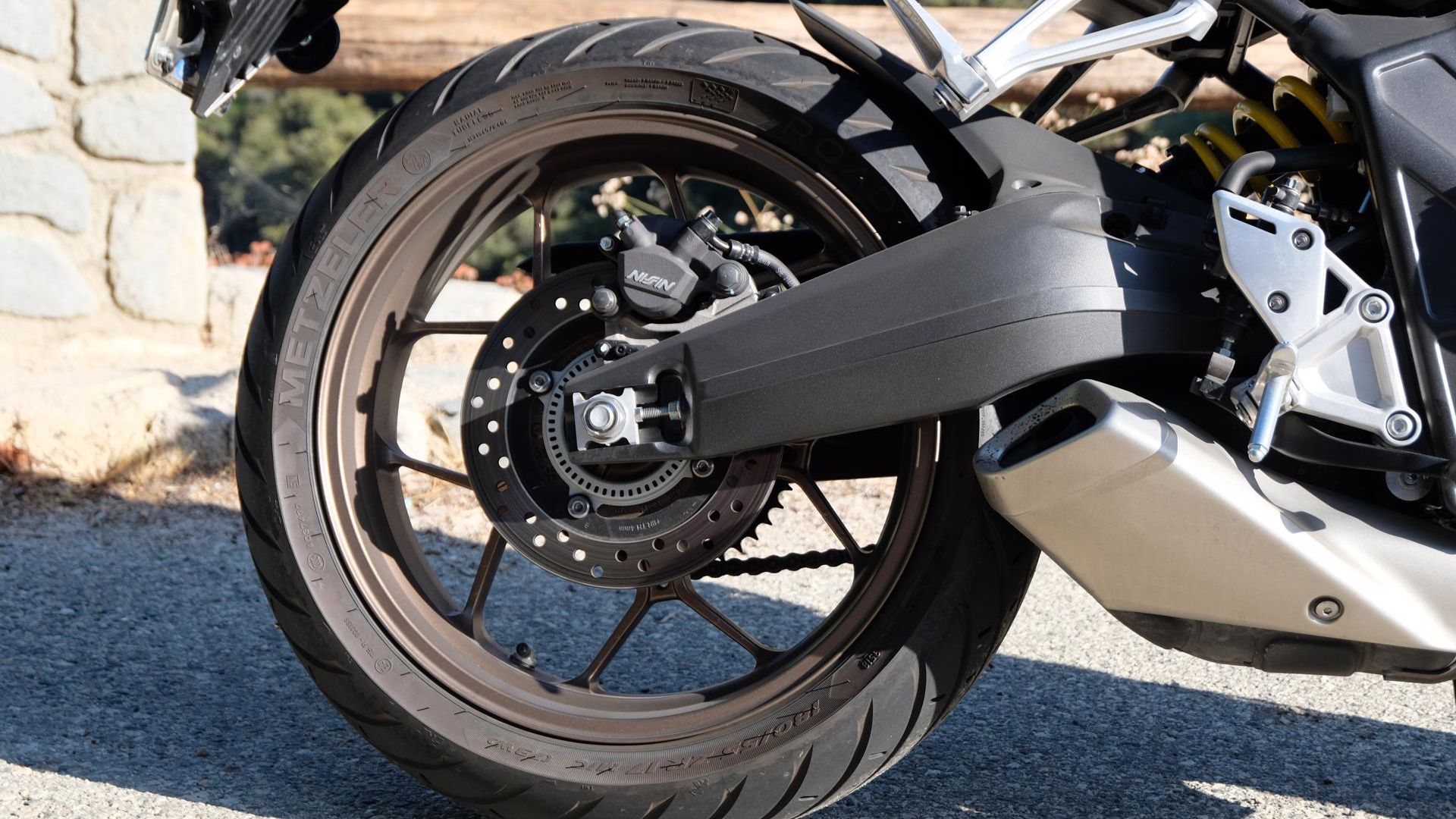 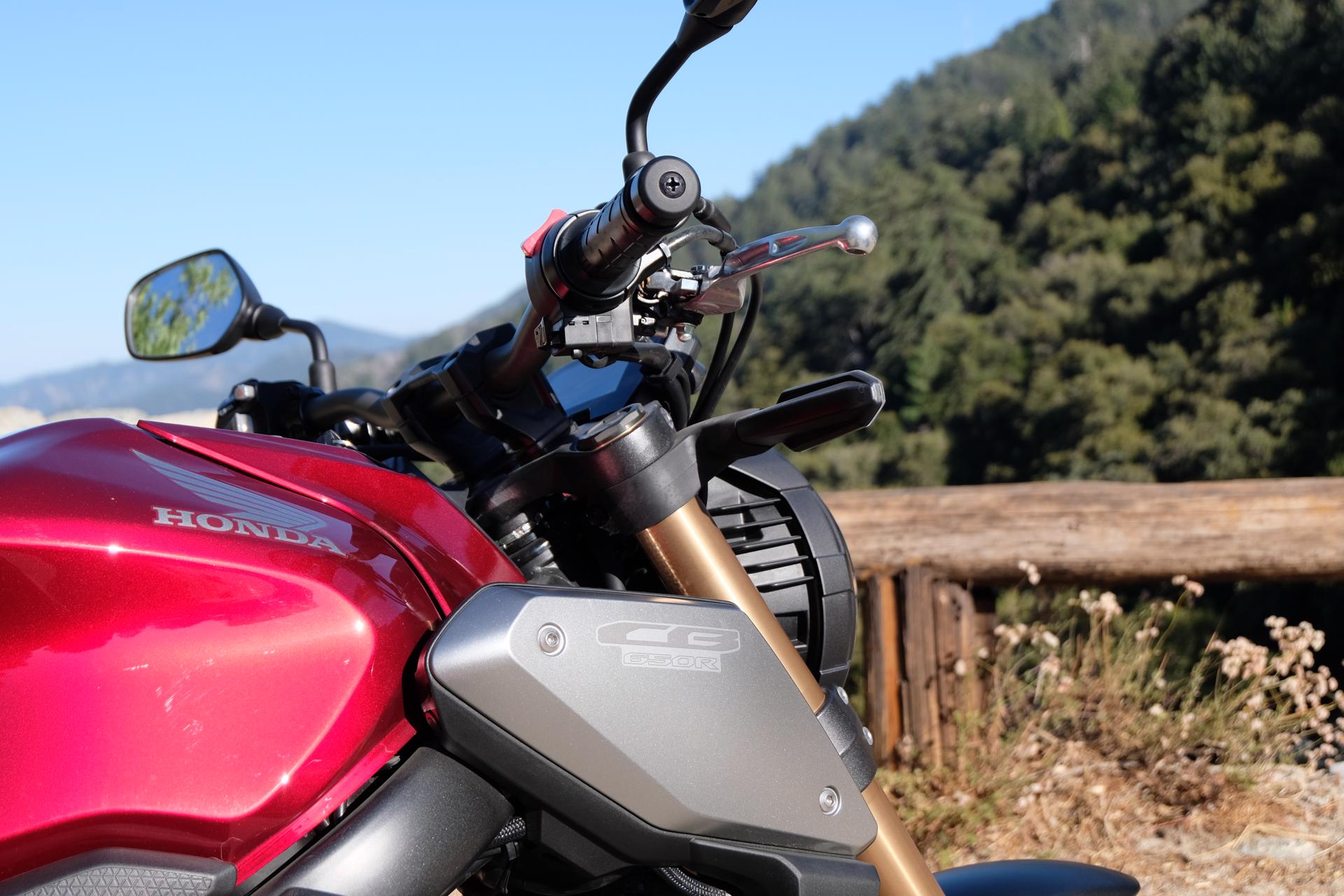 A quarter way up Angeles Crest Highway, Tom Misch and De La Soul’s “It Runs Through Me” began streaming through my helmet. The song is a soothingly pop-centric jazz medley. The tempo, the beat, the snappy drums are perfect to groove to. Everything, every worry, every anxious thought, and the rest of the world faded away. I felt myself getting back into the ride; part of that is because of how approachable the sporty CB650R remains.

Through the canyon roads, I began to see just how lovely the bike can be as a companion. It’s light, not overly powerful, and responds to your thigh’s whims. You don’t steer with your hands or lean with your shoulders like other motorcycles as much as you tango with the bike, your hips and legs dancing with the machine between them.

Powering ahead, it’s readily apparent that this isn’t a motorcycle for attacking corners, nor is it one demanding knees be dragged across the gritty pavement. There’s no aggression to the throttle or telepathic turn-in like a race bike. Like Misch’s song, it’s all about flow. The CB650R wants you to just ride, feel comfortable, and let everything else fall away.

The warm wind blowing through my jacket, I hopped onto a particularly desolate canyon offshoot that’s long, flowy, and always empty. A damn-near perfect road. Throttling up, the four-pot engine is peppy at low RPMs but begs to be revved out and reach its 12,800 RPM redline. Jokes about Honda's VTEC (variable valve timing and engine control) kicking in come naturally, as the motor finds its stride past 8,000 RPM and shoots toward its peak with an urgency not felt below that mark. It took me a while to find the balance and not forget a surge was imminent, but once that learning period is over, it pulls like a dream.

Easy to feather, the CB650R's brakes are lovely—progressive and smooth yet able to arrest your momentum safely in a panic stop (say, when you're lane-splitting and a car pulls into your path without looking). They're responsive enough that even in my hyper-cautious state, I eventually felt confident enough to trail-brake the rear as turn after turn fell behind.

Truly, the sum of Honda’s CB650R is that the more you ride it, the more confident you are, and the more you want to swing your leg over its seat. You’ll yearn for short and long rides, trips to the market, the gas station, or even a midnight run to CVS when your kid is sick. After my three months with it, I didn’t want to give it back or give up riding, and that’s down to Honda’s superb engineering. Because without its presence at a trying time, I might have never gotten back on two wheels.

There was good evidence that it was time to hang my helmet up for good. I know my mother would love for me to do just that. But something kept tugging at my psyche. Why should fear bring about the end of something that I love? Riding a motorcycle is my preferred method for self-reflection, and I’ve begun to pull my helmet on more and more, each time feeling better than the last. As I said, Honda gets a lot of credit here. But so does Davey.

Recently, I was reading through an old Car and Driver article Davey wrote after he had a brush with death behind a motorcycle’s handlebars. In it, he writes, “Long-distance riding is meditative, and I find I prefer it on a naked bike, wholly exposed to the elements. All the while, the world is benignly conspiring against you. Road imperfections, inattentive motorists, trucks shedding tire tread, rain, deer, snow, crosswinds, dehydration, hail, lightning. Sure, all might find a way to kill you in an automobile, but there’s no omnipresent specter hanging just outside your peripheral vision. There should be, but there isn’t.”

He continued, summing up my feelings perfectly: “Not to go back up again, or not to get back on the bike, would be completely understandable. But to give up either thing would surely be a loss. My parents, Lemmy, Bowie, Prince, Merle, Gene Wilder: I’m quickly losing the adults I grew up with. I’m not going to lose the joy and peace that motorcycling brings, too.”

Fear helps you survive, but it can cause you to overcompensate and no longer live. Life is full of dangers, terrors, and what-ifs. If you don’t face them head-on, you end up at the end of your life regretting not doing what you actually loved.

So, I’m not giving up riding. At least not yet. I don’t know what the future holds, but two-wheel machines are still in it for me. Maybe it’s on the back of Honda’s joyously rideable CB650R, maybe something else. All I know is that if anyone hankering for a great riding bike, they should head to their local dealer and slap $9,199 down for a CB650R. As a machine, as a piece of fine engineering, that's already a steal. But add in its ability to soothe the soul, and it gives you far more than you ever bargained for.