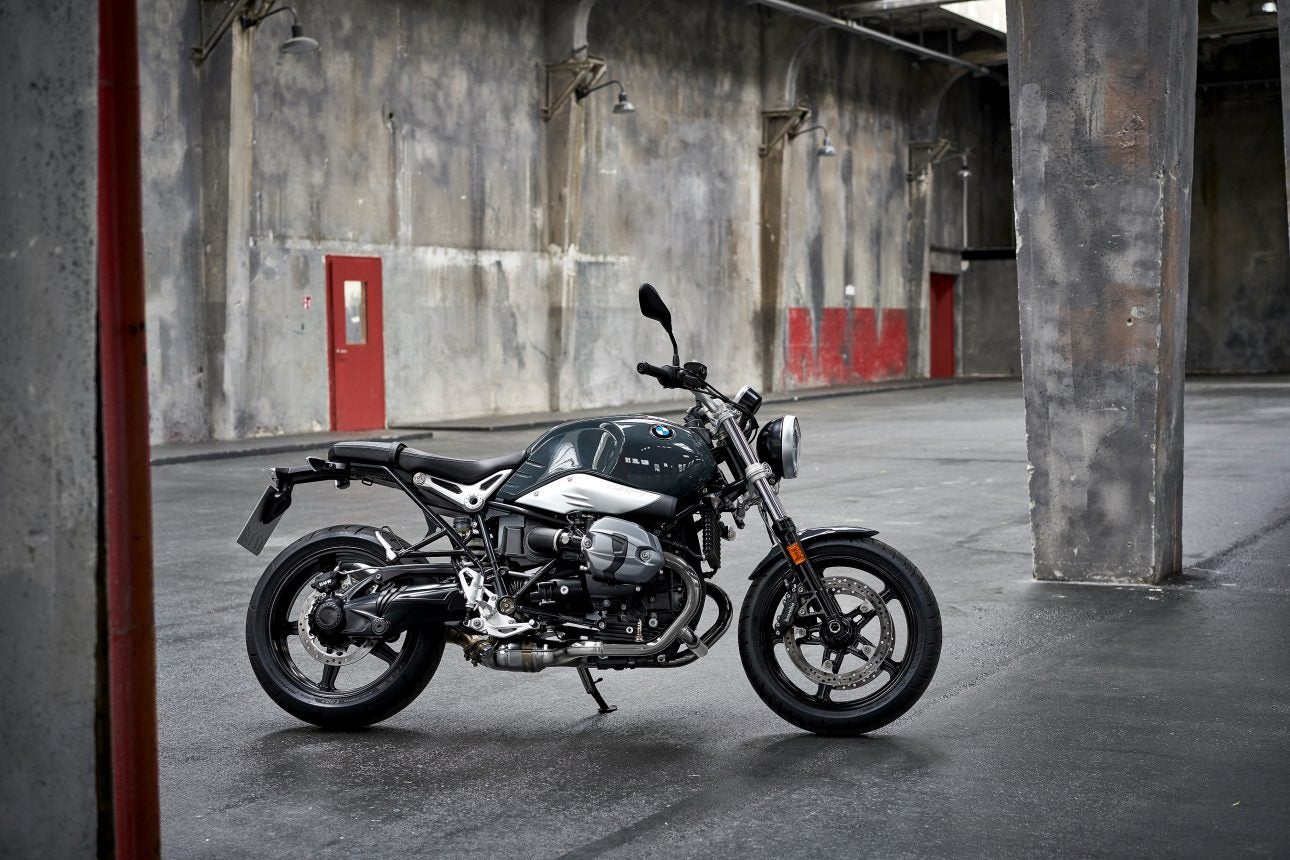 The BMW R nineT Pure comes to you bare, but it's not meant to stay that way. The lowest-priced entry in BMW's overwhelmingly attractive retro-modern R nineT lineup, which includes the stock R nineT plus a handsome Scrambler, a rugged Urban G/S, and a truly beautiful half-faired Racer, is meant to be a blank canvas on which the buyer can build his own, personalized version. That means a single instrument dial—speed only, no RPMs or gear indicator—a color choice between Catalano Grey and Catalano Grey, and 43mm non-adjustable right-side-up forks, a steel fuel tank, and axial-mount Brembo four-pot brakes (the higher-dollar variants come with upside-down Ohlins forks, aluminum fuel tanks, and radially-mounted monobloc brake calipers). It's a basic bike by design—but that just allows its inherent goodness to shine more easily.

It's immediately apparent that the Pure never feels lacking—in fact, it's a wonderfully charming machine: surprisingly nimble for a 480-ish pound bike; an eager and generally content 1170cc, 108-hp motor that always seems to have more pull available the higher you climb the gears; and a relaxed, upright riding position that provides plenty of visibility and decent comfort even on long rides. It's a substantial bike in terms of both weight and power, but remarkably kind to newer riders like myself. And while I never pushed the bike close to its limits, I did ride it often and in varying conditions, everything from short commuter hops to longer day trips to a weekend-spanning interstate trip, the last fifteen miles of which were undertaken in dumping rain. Aside from an affinity for trying to lay down to the right when coming to a full stop and some numbness in my throttle hand during longer rides—the tall, wide bars are great for leverage, but the position doesn't agree with my circulatory system, apparently—the R nineT Pure operated without fuss, an accommodating and capable machine that turned heads and earned more than a few thumbs-up from a wide variety of drivers.

Typically, the trade off for "accommodating" and "without fuss" is a lack of character, but despite the bike's stripper nature, the R nineT has plenty of low-key charm. It sounds good without delving into shouty, "look at me" territory—the Pure, like the Racer, boasts a new exhaust and fuel map here—and it's hard to overstate the bike's presence; while not as overtly flashy as its other siblings, the Pure nails the feel of the original R90S without finding itself in a period-specific costume. (That said, I'd at least swap in a better-looking seat, as the gray-on-gray color scheme does not fully accentuate the striking lines; some contrast, as with the brown leather seat on the Scrambler, works better.) The brakes had more stopping power than I ever needed, the engine, as noted, was both forceful and easy to keep happy, and the bike seemed equally content on quick jaunts or inhaling miles of asphalt. And while the electronics package was most notable for its absences than its presence, I actually came to appreciate that after logging some miles; it forced a studied attunement with the bike, an ear and a feel for what the engine wanted and how to keep it happy. Zen and the art of motorcycling, as it were.

Bikes, like cars, are sometimes celebrated for their eccentricities—add in enough sunk emotional and financial cost over time, and even patently annoying quirks become "charming." Many modern machines are so devoid of drama and feel that the weird bits become their only personality by default. In that context, the R nineT Pure plays a neat trick: it's essentially devoid of idiosyncracy, gives you confidence that it would survive just fine in a Fury Road-like post-apocalyptic wasteland, is suited to a number of different riding demands—and yet it's no boring ol' reliable. It put a smile on my face literally every time I rode it, and on two separate occasions I dragged visiting friends out of a local restaurant just to show it off. All that for a bike I didn't even own.

The BMW R nineT Pure might come to you stripped of everything extraneous, but what's left is good and right and well thought-out. Whether you ride it as-is or indeed spend the time and resources bespoking it to your personal vision, there's no wrong answer. It's a hell of a motorcycle, pure and simple.