How To Get Better Gas Mileage

Saving gas saves you money. Plus, it’s better for the environment. 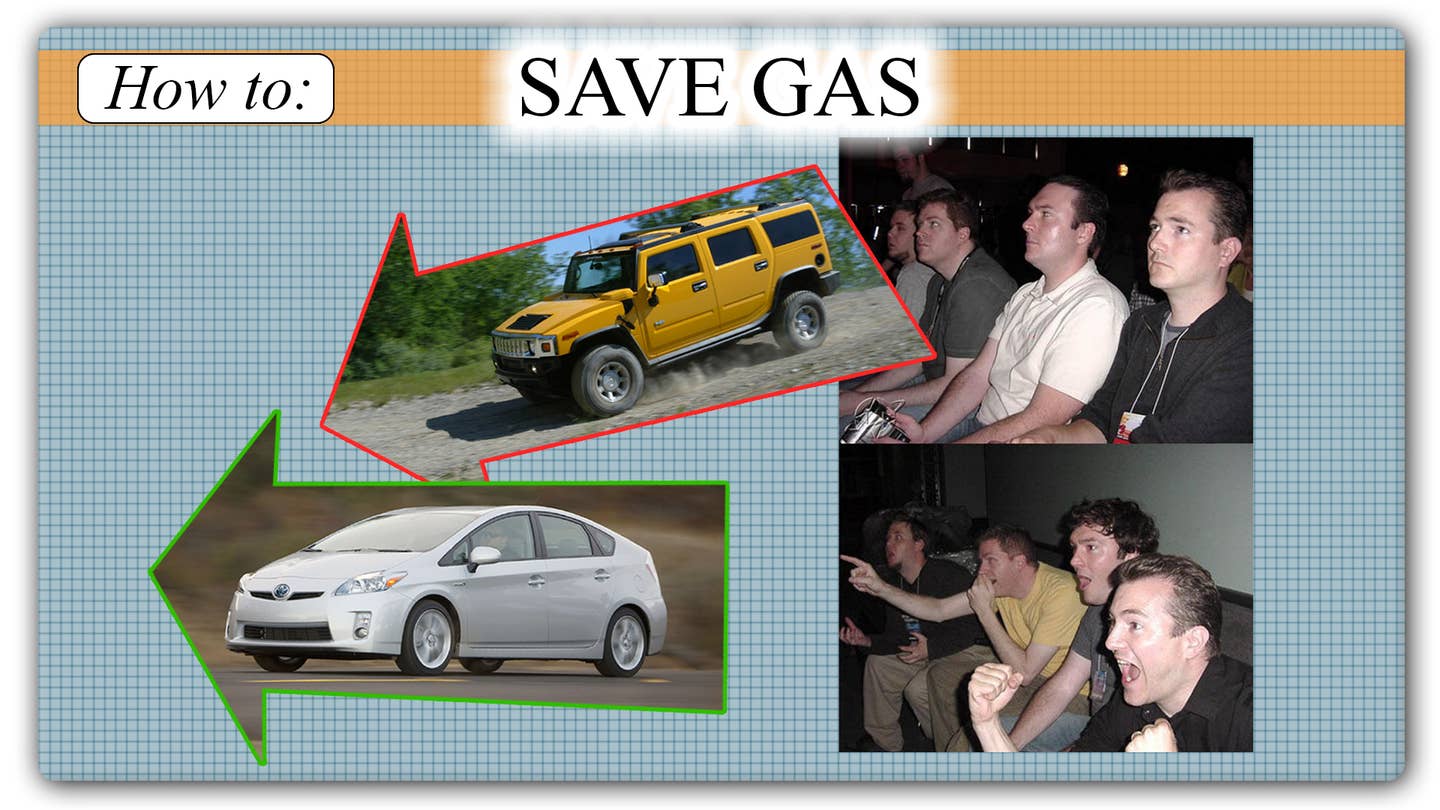 As of this writing, gasoline would certainly not be considered cheap for American consumers. Saving fuel can save you real money, and you don't need to ditch your truck for a Prius to see benefits from fuel-friendly driving practices. If you want some concrete ideas for how to save gas right now, without changing vehicles, we've got you covered in this post.

We often see people shrug off fuel economy when it comes to larger vehicles — "I didn't buy it for the gas mileage" is a common refrain on Jeep forums. But really, the more gas your vehicle sucks down, the more the advice here can help you. If you're already getting great fuel economy in a lightweight compact car, 1 more mpg might not be a big deal. But if you can get 1 more mpg out of a 4x4 that regularly returns 10 mpg — that's a 10% bump! Engineers would kill for that kind of improvement on anything.

What Does 'Gas Mileage' Mean?

Gas mileage, also known as fuel economy, simply refers to how far your fuel can carry you. It's measured in miles per gallon (mpg) in the US (liters of fuel per 100 kilometers in other countries) and denotes the efficiency rate at which an automobile is burning fuel. If you want to dig into that a little more, the U.S. Department of Energy and the EPA have a site called "fueleconomy.gov" that gets into the science a bit. This page specifically gets into how cars are tested and mpg ratings are determined.

Tips for How To Get Better Gas Mileage

Maximizing fuel efficiency requires discipline and patience. But if you use these methods, you’ll see results.

Stabbing the gas pedal is one of the most sure-fire ways to eat away at your fuel economy. Every time you do this, your car is using large amounts of fuel to try to motivate your vehicle up to speed as quickly as possible. Your fuel efficiency will suffer as a result. Instead, use slow and gradual inputs.

Speed limits are put in place to keep things safe, but they can also be good guidelines for helping to protect your fuel efficiency. Gunning it around the city only to repeatedly come to stop signs and lights will hurt your economy, as will driving 65-plus mph on the highway.

The basic principle is this: It’s harder to move something heavy than to move something light. The more weight your vehicle is carrying, the more fuel you will need to motivate the vehicle. Simple as that. Save yourself some cash by taking the golf clubs, toolbox, and case of water out of your trunk.

Using your vehicle’s momentum to your advantage is a great way to save fuel. Stopping and restarting that momentum, however, requires large amounts of fuel and is one of the quickest ways to kill your tank. In other words, you're going to use a lot more energy getting going than staying going.

Reduce AC and 12-Volt Charger Use

Things like the air conditioning compressor (which makes your AC work) and alternator (which relates to your 12v cig lighter sockets working) run off your engine. When that stuff is humming, it's sapping power your engine could be using to move the car forward, reducing efficiency. That said, the effect is generally minimal on a modern (post-2010) car. But on older vehicles, leaving your AC off can actually save you some juice.

Keep the Windows Rolled Up

Maintaining good aerodynamics is critical to maxizing fuel economy. Open windows, sunroofs, or convertible tops mess with that in a big way. So now you're thinking: "I can't use AC or roll the windows down, am I supposed to cook in my car all summer?" If you truly want max mpg, yes. But since that's generally not realistic, air conditioning is going to be better for overall fuel eoconomy than rolling the windows down most of the time.

Take Roof Racks Off When You Don't Need Them

In addition to friction, your vehicle is also fighting against drag when in motion. By adding things like roof mounts, bicycles on those roof mounts, kayaks, roof tents, or roof storage boxes, you are making it more difficult for the vehicle to cut through the air. Your engine will need to work harder to maintain the same speeds, and it will thus use more fuel to do so.

You just read about how important aerodynamics are, well, protruding things like fog lights, brush guards, bike racks, Thule boxes, and similar stuff all hinder air flow and force your engine to work harder (read: burn more gas) to move your car down the road.

Lifted trucks look cool but being high up is bad for aero, and big tires take more effort to move, which burns more fuel. It's a sliding scale, though. You can fit a modest lift and a little upsize (like one inch on each) without massacring mpg. But much bigger than that and you can expect make a lot more stops at the gas pump.

Consider Fuel Economy When You Pick Your Next Set of Tires

Tires with a low rolling resistance will be good for mpg, and lightweight tires will help too. Yes, different tires have different weights and the effect on fuel economy can actually be pretty big! If you're comparison shopping, Tire Rack has a pretty good comparison tool that lets you see tire weights. Or, just ask at your tire shop about "tires for efficency," they will probably have a specific one to recommend for your car.

Consider Fuel Economy When You Pick Your Next Car

It might seem obvious, but, if you're looking at a vehicle that burns a lot of fuel (trucks, sports cars, old junkers) make sure you really do the math on just how much it's going to cost to operate and never assume gas prices won't climb.

To maximize your fuel efficiency, your vehicle needs to be operating at 100 percent. The only way to ensure your vehicle’s health is to perform regular service and show it special attention and care.

Q: Does driving slower save fuel?

A: Generally speaking, yes. If you're zooming around, your car's working harder and burning more gas. But if we're talking about steady speed cruising, you're likely to get better mileage at 60 mph than 30. For example, EPA ratings typically prove that a vehicle’s highway fuel economy is better than a vehicle’s city fuel economy. However, once you reach a certain speed on the highway, say about 65 mph, fuel economy starts to degrade due to the energy demands needed to maintain that speed.

Q: So what speed is best for my fuel economy?

A: Sticking to the speed limit is the easiest way to get good fuel economy without making driving too onerous. If we’re talking about the most efficient speed range, you should probably shoot for 50-60 mph.

Q: Does cruise control save gas?

A: In cases when you are driving down a flat straight highway without many cars or interruptions, cruise control will keep you at a steady speed and will maintain a steady fuel flow. This is one of the most fuel-efficient things you can do when driving on the highway, however, there are exceptions. If you have adaptive cruise control and are driving in stop-and-go traffic, your car will constantly be gunning it to try to get back up to that higher speed and will hurt its fuel economy. Separately, using cruise control on hills or mountains could be harmful to fuel economy because it will be gushing fuel to maintain high speed up the hills.

Q: What is Top Tier gas?

A: Top Tier is a brand-developed marketing term. The pitch is that it's "a fuel performance standard written by auto manufacturers to assist in keeping the engine cleaner." In other words, a Top Tier fuel is supposed to have a known and consistent quantity of detergents. Practically speaking, almost every gasoline brand you've heard of is certified as Top Tier program (see the list here). Whether or not it's actually consistently better than gasoline not branded as Top Tier is impossible to really know (sorry) especially since, as of this writing, Top Tier has absolved itself of standing behind its product with the following statement: "Disastrous weather conditions and unplanned additive production operational outages have resulted in some of our Top Tier Detergent Gasoline Fuel Marketers being unable to supply gasoline with the approved detergent at the approved dosage..."

So even if a gas station is listed as Top Tier, you might not be able to get the special sauce that make it any different from non-Top Tier.

All that said, The Drive does recommend using fuel from known brands because regardless of supply chain issues, you are generally more likely to get consistent formulation out of them.

A: As gas ages, it breaks down and loses its combustibility, which means it might not function up to its optimal standards. This is explained in more detail in our post "Here's How Long Gas Lasts." If you have old gas, get rid of it for some fresh stuff. Learn how to remove and transfer fuel with our guide: How To Dispose of Old Gas.

Q: Will high-octane (or "premium") gas get me better fuel mileage?

A: If your car is specifically designed to run higher octane or premium gas, it will run optimally and likely return its best fuel economy. Your owner's manual, or maybe a little sticker inside the fuel filler flap, will tell you this. If you don't see anything there, Google your specific year/make/model and something like "takes premium" to find out. If your car does not call for premium, you will generally not see gains from running premium.

Some fuel brands do claim their premium fuels have proprietary detergents that clean internal engine components which could theoretically improve fuel economy, but realistically you're better off just running what the manufacturer calls for. If you'd like to learn more, read "Everything You Need to Know About Octane!" On a related note, you can learn "what happens when you put regular gas in a premium car?" if you're curious.

Q: Will fuel additives (like SeaFoam or Lucas) get me better fuel mileage?

A: The short answer is probably not meaningfully. But, there are situations in which fuel additives could help improve fuel economy. Search for your specific car or drop us a comment and we might be able to point you in the right direction to do more research there.

Q: What is hypermiling?

A: "Hypermiling" generally refers to driving for maximum fuel economy: No stops, lots of coasting, bare minimal throttle application. It also refers to the culture that's arisen around this kind of driving.

In this video, you'll see real-world fuel economy testing. It's an old classic, but the science hasn't changed.

Let’s Talk: Comment Below To Talk With The Garage Editors

Gasoline is fun and interesting to discuss because, well, if our cars can't drink it they won't do us much good. Anybody got gas-saving tips we missed? Favorite stations to use? The comment section's open!

Maximize your fuel efficiency and save money with these top diesel fuel additives.

It’s all about renewable options.