The Most Fuel-Efficient Cars in 2020 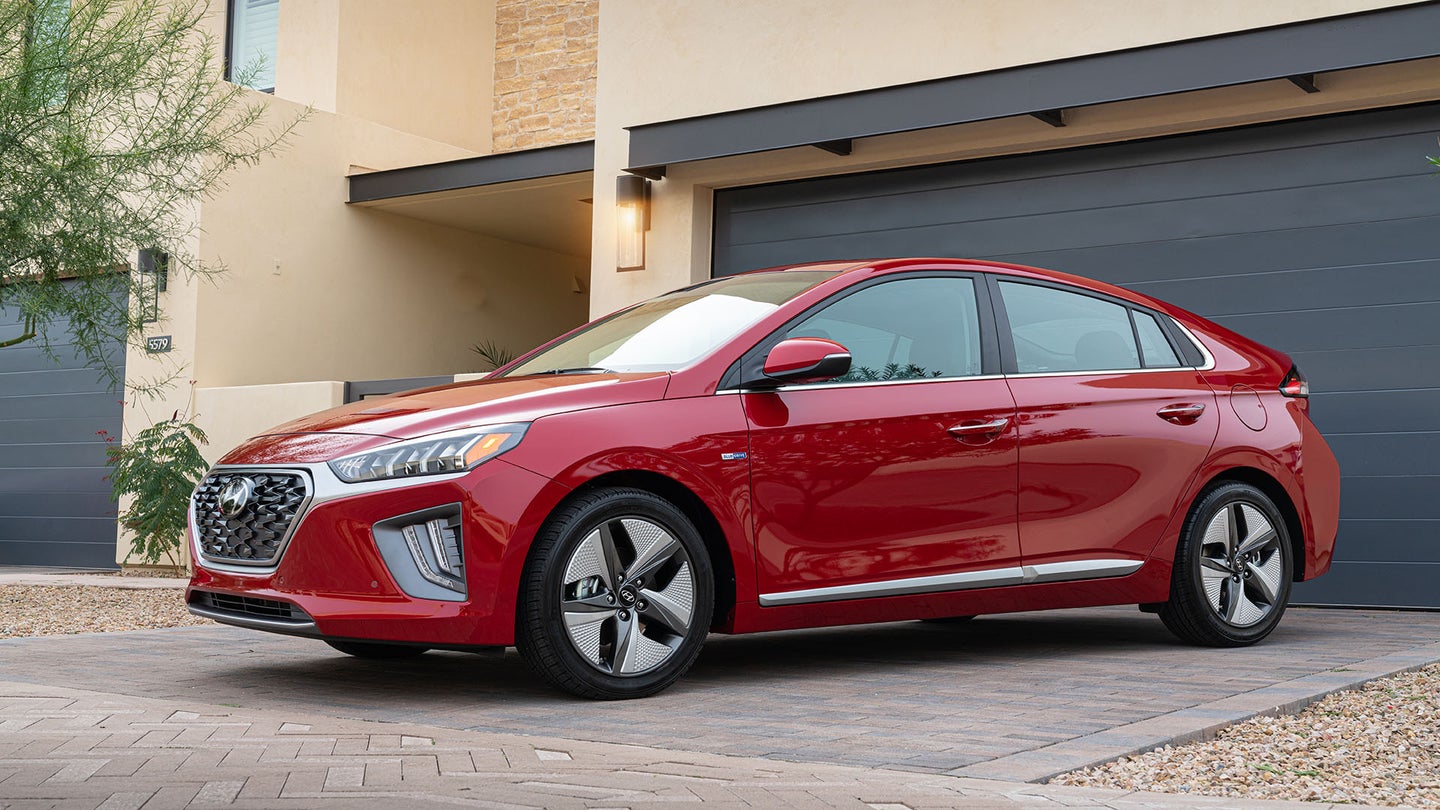 Owning a fuel-efficient car is great for your savings account, great for Mother Earth, and bad for people with small bladders. For drivers who accumulate miles quicker than First Edition supercars sell out, a fuel-efficient vehicle could drastically improve your quality of life.

There are lots of options, too, which makes finding a high-efficiency car easier than ever. If emissions are your primary concern about driving an internal combustion vehicle, then maybe it’s time to consider an electric vehicle. If price and variety are more important, hybrid powertrains are now available for virtually every class and type of vehicle, save for trucks, though they’re starting to trickle in, too.

To take the guesswork out of determining the best available options, The Drive’s crack info team has gathered a list of the most fuel-efficient cars on the market today. Let’s figure out your next ride.

What Is Fuel Efficiency And Why Is It Important?

Fuel efficiency is important from a personal standpoint, as well as from a global view. The macro perspective sees that a fuel-efficient vehicle benefits the planet by using less gasoline and releasing less harmful gas emissions into the atmosphere. From an individual perspective, a fuel-efficient vehicle benefits its owner by reducing trips to the gas station, which keeps money in your pockets.

MPG is a measurement of how many miles a vehicle can travel on one gallon of gasoline fuel. MPGe, which is used to measure the “fuel economy” of hybrid and electric vehicles, stands for miles per gallon equivalent. According to the United States Department of Energy, 33.70kWh of electricity has 100 percent of the energy of one gallon of gasoline. Thus, if a vehicle is able to run for 100 miles on 33.70 kWh, it is rated at 100 MPGe.

If you want to read more about hybrids and EVs, you can read The Drive’s extensive guides to the advantages and disadvantages of a hybrid car and charging electric cars.

What Factors Affect The Fuel Efficiency Of Cars?

Fuel economy is not a consistent, unchanging number. It’s determined by how you drive, where you’re driving, and a number of other factors. If optimal fuel efficiency is your goal, take note.

Driving around town like you’re Bowser in Mario Kart puts stress on the engine and its components. When the powertrain is forced to work harder to meet demands that are outside of the typical daily routine, efficiency suffers. More power requires more fuel, so the engine sucks it down quicker.

If extra people or extra cargo weigh the vehicle down, it requires more energy to pull or push itself around. More energy means more fuel, which means worse efficiency.

Both extremely hot or cold conditions can strain an engine’s components and make it more difficult to accomplish its job. If the fluids or fuel system cannot function properly, the vehicle’s fuel efficiency will suffer.

Driving in places like San Francisco, where land undulates to the beat of Rhythm Nation, a vehicle will likely underperform on its EPA ratings. Going up hills puts a lot of stress on an engine, particularly if it’s underpowered.

The Top 10 Most Fuel-Efficient Cars

Every single car on this list is a plug-in hybrid that requires charging a battery via a public or personal charger. This also means that every vehicle on this list has a tiny all-electric range that doesn’t use a drop of gas.

The Subaru Crosstrek is a small four-door crossover hatchback. It is rated to have 17 miles of electric range and is one of the only PHEVs available with all-wheel drive.

Okay, we cheated by including the 2021 Rav4 Prime, but it’s too good to leave out. With 302 horsepower, a 5.7-second 0-60-mph time, and roughly 40 miles of fully electric range, the plug-in four-door crossover once again proves that Toyota owns the hybrid game.

The BMW i3 is essentially a true electric city car that can be optioned with a gas generator to make it a hybrid. The EV version has a 153-mile range, while the version with the range extender can reach up to 200 miles. Although expensive when new, the i3 and its stylish interior is a great deal on the used market.

The all-new-gen 2021 Kia K5 (new name, same heritage), but the current Optima remains a good option. Although the Honda Accord and Toyota Camry are available as regular hybrids, the Optima PHEV has the advantage of up to 28 miles of pure electric driving.

All of the recent Ford fanfare has expectedly focused around the all-new Bronco, the all-electric Mustang Mach-E crossover, and the upcoming electric F-150 pickup truck, but the new Escape plug-in hybrid deserves attention. Ford took a much more sophisticated approach to its design, inside and out, and smart packaging makes it practical and versatile. On electricity alone, the Escape PHEV can drive up to 37 miles, so Ford says.

Technically, the Ford Fusion is dead, but you’ll likely see leftovers at dealerships for months to come. The Fusion Energi's range is about its only positive, though. Its looks are dated, the interior is terrible, and it has quite possibly the worst hybrid packaging on the market today. The battery impedes trunk space and prevents the ability to use a rear seat pass-through. That instantly makes this car a hard pass.

The Kia Niro is kinda like a hatchback, kinda like a wagon, kinda like a crossover, and kinda like a sedan. The result is a no-nonsense design with excellent practicality that is available as a regular hybrid, a plug-in hybrid, or a fully electric version. The EV is rated with a 239-mile range, while the PHEV has an electric range of up to 26 miles.

The Honda Clarity is available as a futuristic hydrogen-powered fuel-cell vehicle or as a plug-in hybrid. The PHEV’s 340-mile total range falls well short of many competitors, but its battery-electric range is one of the best. Using only energy from the battery, the Clarity can drive up to 47 miles in peace and quiet. If you live in a city, you might never need gas.

The Ioniq is Hyundai’s do-it-all Swiss Army Knife. It’s available as a 133-MPGe fully electric vehicle, a 58-mpg regular hybrid, or a plug-in hybrid. The four-door hatchback PHEV has more muted looks than the Prius, can drive up to 29 miles on electricity, and has a 630-mile total range. It’s nearly impossible to beat the Ioniq’s value.

In 2010, the Toyota Prius was the top-dog hybrid to beat, and in 2020, that remains true, this time with an added word to its name: Prime. The Prius Prime four-door hatchback can drive up to 25 miles on quiet electricity and has an astounding total range of 610 miles. That’s basically Detroit to New York City without stopping. Its wild signature styling is a unique positive or an obnoxious negative, depending on who you ask.

Top 3 Most Fuel-Efficient Cars Without a Plug

Not everybody can install a plug in their homes, has access to public plugs, or wants to plug their cars in at all. That’s what regular hybrids are for.

The Honda Insight is basically a hybrid Honda Civic, and we say that with the utmost positive regard. The Insight has a classy, if not invisible, design, solid tech value, and decent driving characteristics. It’s rated at 55 mpg city, 49 mpg highway, and 52 mpg combined. Who doesn’t like a more fuel-efficient Civic?

The customers who decide “I want a hybrid” and simply purchase a Toyota Prius are in luck. The cult car continues to represent a standard for fuel efficiency with 58 mpg city, 53 mpg highway, and 56 mpg combined.

Some people just want their keys and their gas engines, and there’s nothing wrong with that. These are a few fuel-efficient economy vehicles.

As a larger class of vehicle, the Civic impressively keeps up with smaller vehicles in efficiency. The 1.5-liter turbocharged Civic sedan is rated at 32 mpg city, 42 mpg highway, 36 mpg combined.

Hyundai recently introduced an all-new generation of Elantra with radical angular designs and an available hybrid option. But the regular gas Elantra can hold its own. The EPA rates the four-cylinder Elantra at 33 mpg city, 43 mpg highway, 37 mpg combined. There’s no reason to be sleeping on Hyundai at this point.

So many look upon the Mitsubishi Mirage with disdain, but there’s one thing it can always champion: gas mileage. Without the aid of any fancy hybrid tech, its little 1.3-liter three-cylinder is EPA-rated to get 36 mpg city, 43 mpg highway, and 39 mpg combined. We introduce to you, your gas efficiency king.

What Is The Cheapest Fuel-Efficient Car?

The BMW i3 is one of the best-kept secrets on the used car market. Lightly driven examples with the range extender are regularly listed for approximately $15,000-20,000. The i3 remains one of the most unique vehicles on the road, and its gorgeous interior is virtually unmatched, especially on a proper small city car. The only major disadvantages are the need for a plug and the relatively limited total range of about 200 miles.

If the complexities of hybrid powertrains turn you off, an old fashioned gas Mitsubishi Mirage starts at $15,135.

What’s the Most Practical Fuel-Efficient Car For Families?

One of the best vehicles on the planet is not included in the lists above: the Chrysler Pacifica Hybrid. The Pacifica is seriously attractive, inside and out, offers plenty of storage, and is now available with a plug. The 2020 model is rated at 82 MPGe, can drive 32 miles on electric-only power, and has a total range of 520 miles. With two screens in the back for playing chess or watching movies, it's a perfect vacation vehicle.