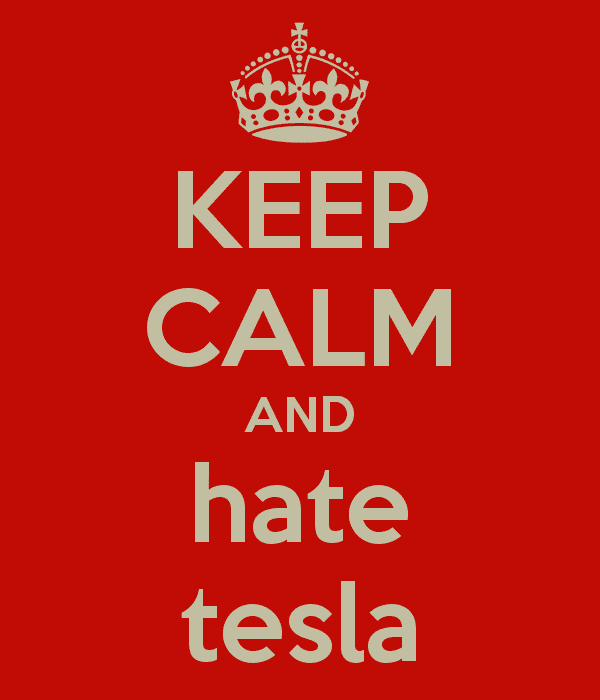 What happens when the talented kid in class won't share his notes?

They get bullied, bitched about, or if they're lucky, ignored by their jealous classmates. More times than not, it comes to mere words and a lack of friends for that hardworking kid. Life goes on, and hopefully that kid becomes a great leader instead of the Unabomber.

But in the corporate world where one companies success may mean several billions lost for an inferior competitor's products, there are no shortage of hired guns who will twist the truth to serve their financial masters.

With that in mind, Edmunds just released what has to be the most insanely twisted critique I have ever read in my life. Here it is in PDF form. The study, which frankly was timed and targeted to be a Tesla takedown, tries to hit the bullseye big point on page two with this stand-alone sentence.

"Without tax credits, this (EV) market is likely to crash"

What they're talking about is the $7500 federal tax credit that is provided for every manufacturer that sells electric vehicles. Once Tesla sells their 200,000th vehicle, that subsidy will gradually go away and eventually leave Tesla at a $7500 disadvantage against its competitors. Or, to put it another way, if Trump and the Republicans decide to repeal this tax subsidy, Tesla's sales along with other EVs will go straight to the toilet.

They cite the Georgia market, my home state, which used to offer a $5000 state tax credit on electric vehicles until July 2015, as proof of this future crash. Once this subsidy went away, the market did crash for a few models that were already at least five model years old (Nissan LEAF, Chevy Volt, Mitsubishi I-MiEV).

But this didn't happen to Tesla. Not at all.

The 'study' intentionally plops the word Tesla onto a graph on the bottom of page three, that invariably focuses on the cliff dive of a completely different model. the Nissan LEAF.

This is a classic case of bait-and-switch. Tesla sales didn't crash. They stabilized, and now Tesla sells more electric vehicles in Georgia than anyone else.  Buried under two graphs with hysterical conclusions and a liturgy of text is this well hidden nugget of truth.

Sales of the Tesla Model S declined post credit elimination but bounced back to normal levels within a few months.

So in otherwords, the crash didn't really happen for Tesla at all. So what about all the other electric vehicles of that time such as the Ford Focus EV, Fiat 500E, the Mitsubishi I-MiEV, the Chevy Spark EV, or that nearly unknown model, the Smart Electric Drive?

Edmunds doesn't include the data for any of those vehicles. Not a single one. The only model that appeared to actually crash based on this poor excuse for a study was the Nissan LEAF. A model that already had a steep sales decline nationally of over 50%. This decline happened well before the Georgia subsidy was removed (special thanks to goodcarbadcar.net). The LEAF was also scheduled to be replaced with a brand new model later that year. Model changeovers usually result in temporary production and sales declines, but Edmunds chose to completely ignore that as well.

So the data doesn't support the conclusion, Why did Edmunds publish it?

I believe it was due to the tight financial relationships Edmunds already has with car dealers. If you go here you can find the following advertorial partnering content that's typical for the industry.

Visit Edmunds.com for a complete listing of local car dealerships in your area. Find the best deal on your next vehicle with online discount price quotes on car, truck, SUV, and minivan models. With the ability to compare prices on new and used vehicles by location,

Edmunds.com makes the car buying process convenient and cost-effective. Search for local car dealers by make or region with our comprehensive dealership network and avoid the common hassles associated with car shopping.

Edmunds already has a thriving partnership with new car dealers - not with Tesla. Like Autotrader, Cars.com, and TrueCar, Edmunds is in the business of partnering with those new car dealer networks who hire lobbyists and special-interest groups to keep Tesla from retailing their cars directly to the public.

Does Edmunds disclose their relationships in this study? Not at all. But they certainly timed it right and orchestrated it well so that this kernel of doubt could be marketed by those who also want to feed off the corporate teat.

Is Tesla weak in certain areas? Without a doubt. I have highlighted a few of those issues here, here, and here. Edmunds can make a lot of great arguments when it comes to Tesla but they need to use the right data to make that point. Edmunds chose to take the easy way out and, for the most part, tried to use the decline of one non-Tesla model, the Nissan LEAF, as a way to let other news outlets promote doubt for the upcoming Tesla Model 3. It's a shame because the opportunities and threats for Tesla over these next several years are going to be far more complicated.