Footage shows a trio of vehicles speeding, driving on the wrong side of the road and cutting off cars. 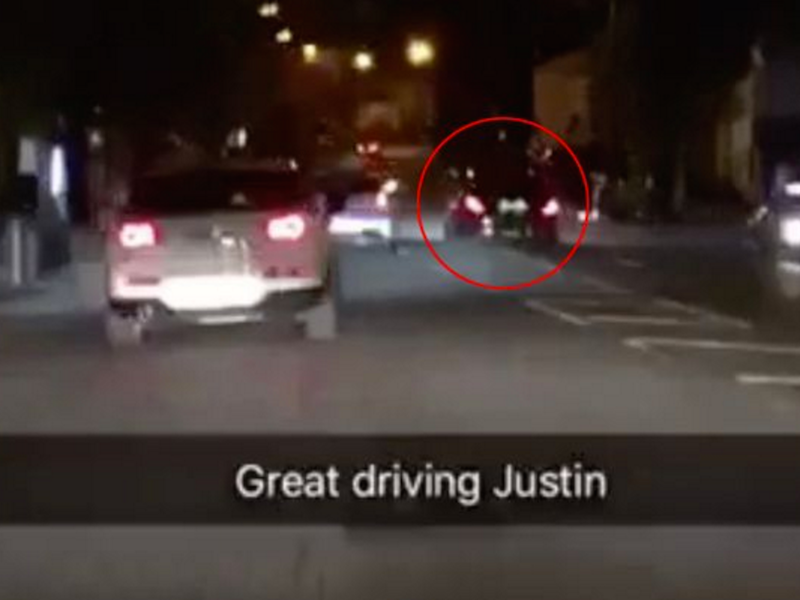 Is it too late to say sorry? Cheshire police are “keen to speak to anyone who may have witnessed” Justin Bieber’s three-car convoy allegedly driving erratically on rural British roads last evening in Cheshire. The pop star, 22, in the UK for his Purpose tour, is believed to have been riding in the back of a Range Rover, trailed by two Mercedes-Benz S-Class sedans, when the trio of vehicles was caught on video swerving into oncoming traffic to pass slower moving cars, cutting off cars waiting to turn and speeding. Poor form, Biebs.

“F****** hell, that is such bad driving,” says one of the eyewitnesses behind the camera, after one of the vehicles jerks into the opposite lane to unsafely pass. The footage was ultimately sent to the Daily Mirror,who ran a short clip of it today. Of the convoy’s driving, the amateur paparazzi said, “It was very unnecessary. I’ve never seen a car do such a stupid maneuver and put people’s lives at risk. That’s why I was so shocked.” The clip, originally uploaded to SnapChat, garnered enough views to put Bieber on the local police’s radar.

“We are aware of footage on social media which appears to show erratic driving in the Frodsham area yesterday evening. Although we have not received any reports in relation to this, we would be keen to speak to anyone who may have witnessed the incident or has recorded the original footage,” a Cheshire police spokesperson told The Daily Mail. Bieber is renting a $20,779-per-month mansion in Frodsham while he’s touring in Manchester, Sheffield and Glasgow.

Why was Bieber in such a hurry? Why, to play ice hockey with the Manchester Storm team before going to a local pub to drink with the players! The team’s general manager told a local newspaper, “I'm in the pub, stood next to [Bieber] now. I sent him an email a few weeks ago and heard nothing back. Then I got a call on Monday saying he would be very keen to meet up with the team for a skate. He cancelled on us three times but then they got in touch tonight and said I'm on my way. So I got the team together and we were all skating with him for a good hour or so. And now we are at the pub with him.”

A rep for Bieber has not responded with a comment on the incident. Watch a snippet of the bad driving below.

Celebrating Aloha Wanderwell, the Amelia Earhart of the Car

Celebrating the life of adventuress who blazed her own road