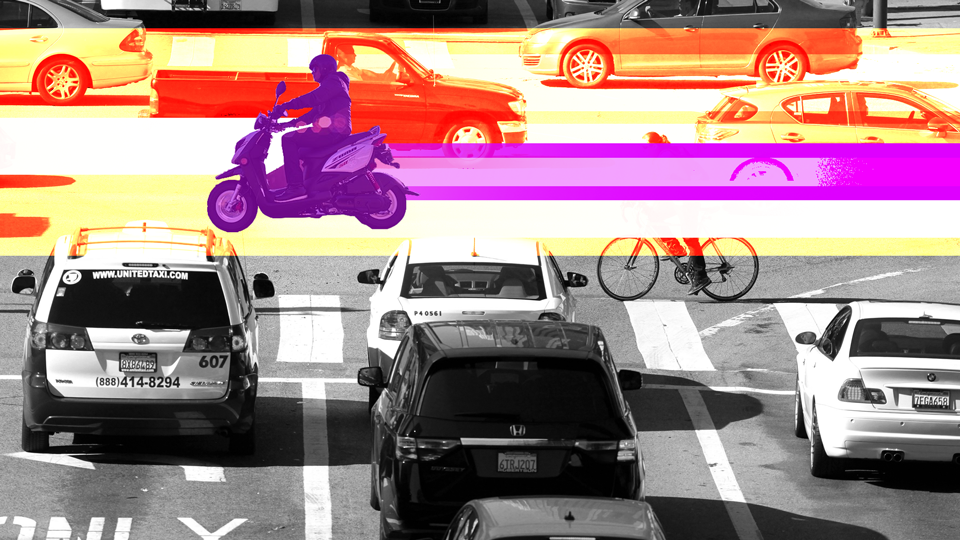 Los Angeles is a fucked-up town. It will warp your perspective into something completely unrecognizable to most of the outside world. I was raised in New York, but I’m confident that I’m a completely different person than the Matt Farah who arrived in Hermosa Beach in 2009. I’m now more California than New York, despite the fact that my agent says I’m marketable because I’m a “New York brain in a Kansas City body.”

This, by the way, is what a compliment sounds like in Los Angeles.

If you're into cars, it's an even more fucked-up town. LA has the worst public transit system on Earth, so weneed our cars. And for all its history as a global center of automotive design and culture, LA is a fucking strange place to be seriously into cars. There are only two types of driving you can do here: the shitty, crowded, potholed, vibrato-concrete grid streets and freeways, or the canyons that wind through the Santa Monica Mountains connecting LA to the San Fernando Valley, which are just about the most perfect ribbons of tarmac a sports car fan can ask for.

There is absolutely nothing in between the two extremes. It’s like the always incredible comments section on YouTube, where everything is considered either the greatest piece of cinema ever filmed, or somehow comparable to Hitler. Each type of driving is optimized with a certain type of car, and with rare exception, the two types do not intersect.

The rest of the world is not like that. Elsewhere, one finely balanced car is enough to satisfy most of your requirements. But LA will make you want to fulfill your appetite for both extremes. It's enough to make a car guy like me go insane.

So I've reacted in a very different way, by going down a path I could have sworn I’d never follow: I've become extremely practical.

That is an uphill battle for someone like me. I’m supposed to be a brash, testosterone-filled car guy. I’m supposed to roll up to the office like Toretto, with a blown, big-block Charger doing a wheelie into the boss's parking space. Being a car guy means sacrifice; it means a sore back from your Kirkey aluminum seat, arriving at meetings dripping sweat because You don’t need AC in California, amrite?, it means not being able to walk properly because your Stage 5 clutch kit is a bitch on the 405 but I need it to handle my 700-horsepower STI, bro. It means listening to your crap Chinese tires rub holes through your fender wells because more camber is always better than less camber when you’re commuting 20 miles a day to your job at Best Buy.

I want to be that cool car guy, but I just can’t. It’s too annoying. My back—already two surgeries in—just can’t take it. “Sweaty in public” is my least comfortable state of being. So when I got to LA and sold my John Cooper Works Mini to fund the starting of The Smoking Tire, I headed down the slippery slope of practicality.

Eight years later, I think I’ve hit practicality bottom. My every day car isn’t a car at all—it’s a seven-year-old Yamaha Zuma 125 Scooter. And I love it.

1993: Uncle Dick isn’t my uncle; he’s my dad’s cousin, and to this day I don’t know what Uncle Dick does for a living. He speaks many languages and travels a lot, so I’m going with spy. No member of my family has ever attempted to correct my theory on this. When I was 12, Uncle Dick told me I could ride his Puch 50cc moped up and down the block a bit. I had never ridden anything with two wheels and an engine before, so 12-year-old Matt was fucking stoked. I took a denim jacket I had and cut the sleeves off, fraying the seams at the shoulder, and ironed on a few patches I’d been collecting. I put gel in my hair and spiked it like a Sex Pistol. I wrote bands I liked on the jacket in Sharpie. I was gonna be a biker.

Next day at Uncle Dick’s house, I arrive ready to ride. They're all in Easter Sunday attire, and I look like fucking Rick Vaughn in Spring Training. In front of at least 30 people, Uncle Dick, the loudest member of my family, shouts, “Look at this guy here! I say he can ride the moped he thinks he’s joining the Hells Angels!”

I burned the jacket the next day, and subconsciously took Uncle Dick’s crown as the loudest member of the family.

2009: I sold my Mini to a wholesaler who sent it out of country and bought a Suzuki SV650 Motorcycle with some soft saddlebags. Sliding through traffic in the only state in the Union that allows lane splitting was a joy; all of LA was now 20 minutes away. But I had to get all dressed up in pads every time I rode it, and the sight of it in the garage made my mother cry, so after a year I sold it and bought a pickup truck. This would be practical enough, I thought. And I would have been right, if I had bought a Honda Ridgeline. But I bought a Raptor, which I spent three years trying to justify as a practical choice. But at seven feet wide, six feet tall, and with 12 miles to the gallon, I was kidding myself. Car-guy cred intact, but practicality not achieved.

I thought I had reached peak practicality when I sold the Raptor and leased a 2013 Chevy Volt, which was, and still is, a magnificent LA car. The serenity of a silent, vibration-free electric vehicle when your city moves at an 18.5 mph average cannot be overstated. The practicality of a hatchback, which held the same amount of camera gear as my Raptor in a lockable trunk, cannot be overstated. And the incredible fact that, over eighteen months, I filled up the Volt six times, averaging over 190 mpg in real-world conditions, cannot be overstated. The Chevrolet Volt is an appliance car if there ever was one, but as far as I can see it is the single best appliance car money can buy. I had come close to peak practicality. A black Volt is invisible here. It’s cheap, comfortable, full of tech-y features, drives more like a Tesla than a Prius, and asks absolutely nothing of its owner. Appreciative, but finding myself with four fourth cars at the end of 2014, I gave the remainder of the Volt’s lease to my sister, who does not have an outlet in her apartment building to charge it. She’s been driving exclusively on the gas engine, averaging nearly 50 mpg. Peak versatility? Maybe. Peak practicality? Not quite.

I now live in Venice, California, which, like a microcosm of the rest of LA, is either wonderfully, beautifully quiet (weekdays, winters), or a total shitshow tourist destination (summer weekends, holidays). The streets in Venice were originally designed and built as canals in an attempt to recreate the Venice you’re probably thinking of, and paved over in the early 20th century. They are narrow, there's very little street parking, and on the weekends and all throughout the summer, they're jam-packed with convertible Mustangs and Camaros, Chargers, 200’s, and Renegades—LAX’s entire rental fleet ends up here. My girlfriend lives in Santa Monica, 4.4 miles away; that drive, on a weekend, can and will take 40 minutes. Which brings me to peak practicality.

"There isn’t a wide-body Hellcat or tuned GTR in all of LA with an owner whose dick is so small they need to race a fat man on a scooter to the next stoplight."

The Yamaha Zuma 125 was released in 2008 with a 123 cc, 4-stroke, air-cooled, single-cylinder engine making a whopping 11 hp, once it’s broken in, according to Wikipedia. Well, this one is broken in. It’s got just over 4,000 city miles on it from the last seven years, tops out at 60 mph, and has just enough battle scrapes and stains for me to not give a flying fuck how it looks. It’s got some sticker from some surf company, and I can’t even be bothered to remove it. It had the original knobby tires on it and had probably never been serviced once. I bought it off The Smoking Tire Podcast producer Chris Hayes for $1,500, and am convinced it will be worth $1,500 forever, as long as it’s running. I got a cargo box for it, put some new, road-friendly tires on it, and did the bike’s one and only major service for a grand total of $2,000 invested. It costs $200 per year to insure, and literally takes $2 of gas a month to keep going. It shovels the shit of the fourth car black hole a little further down the pike, acting as a filler between press cars and trips.

And every ride is like being on vacation. Around town, where speeds are so low, I get 90 percent of the fun of riding a real motorcycle, except in a smaller, lighter, more nimble package. The throttle response is great, and the engine is smooth and quiet. I can spend time with my own thoughts in my own head without the phone ringing, without all the distractions that come with a car, without the temptation to text at red lights, achieving a zen-like state as I simply clear my head and focus on the task at hand. It feels free.

The Zuma is the fastest vehicle, light-to-light, in all of Los Angeles. Because no one would dare race you. There isn’t a wide-body Hellcat or tuned GTR in all of LA with an owner whose dick is so small they need to race a fat man on a scooter to the next stoplight. Consequently, an attentive right hand means I can make any move I need to slice through traffic. I literally save hours per week riding this bike. That 40-minute drive to Santa Monica is now 10 minutes, no matter the traffic conditions. Between the underseat storage and cargo box I can carry my day’s needs, gym clothes, and a bag of groceries.

And parking! Oh, the joys of parking a scooter in this town. According to a recent survey, 14 percent of incorporated land in LA is dedicated to parking. That’s not nearly enough. Parking here is a nightmare. There are places, incredible places, delicious places, that I will simply not go because of the parking situation. The Zuma fixes that problem entirely, since I can now park, for free, almost anywhere I like.

As enthusiasts, the hardest part for us to reconcile is bridging the gap between what we need and what we want. As a (YouTube) filmmaker, I needed a rental minivan about 20 days a year. To suit that task, I bought a Raptor. I should have bought a Honda Ridgeline; you can’t pry those things from their owners' rapidly-aging hands.

The Zuma is the Honda Ridgeline of two-wheeled vehicles—it may not be what we want to be seen driving, but as a functional tool, achieving not only peak practicality but also joy in operation, this thing simply cannot be beat.

Peak practicality has been achieved. I found a rabbit hole, explored it, and made it to the end with some money in my pocket. I may not look cool, but I’m happy. And I’ll take happy over cool any day.

Jesus, I’m starting to sound like my parents. But that’s a whole other story.