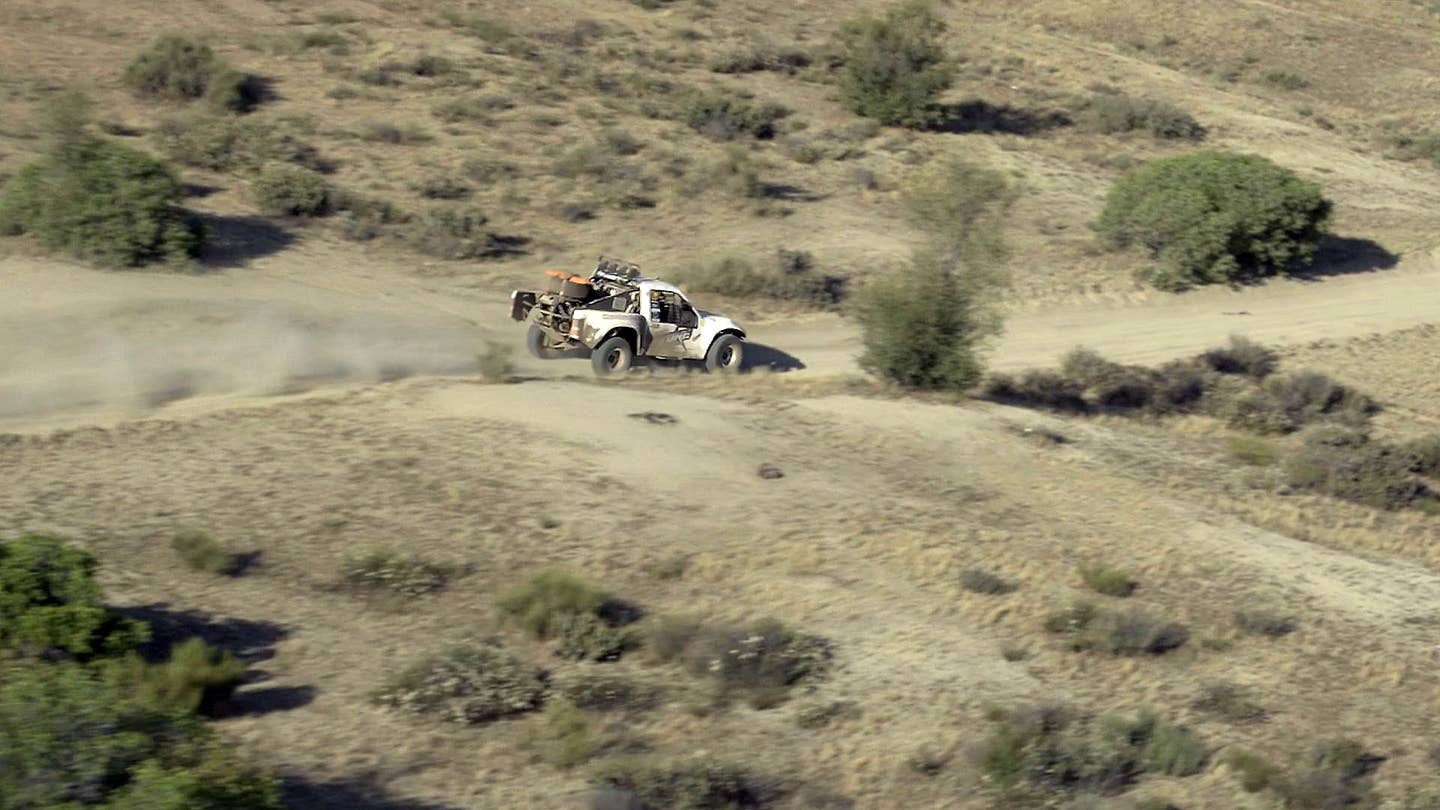 Two sunburnt French-Canadian Beetle drivers spread the news. Another Class 11 driver counts aloud. “83, 84,” He points at our white VORE truck. “85.” He trudges back, red dust trailing behind him.

All our progress, all our momentum, parked. The back half of the race is hung on one deeply rutted sonofabitch of a hill. A dozen drivers in their race suits have made the hundred yard hike to the ridgeline. It’s a rude view. Racing trucks and buggies snake through the sagebrush. Sweat drips into my eyes and makes tracks through the dirt on my face.

We have snacks. The water in my backpack is still cool. The VW guys are regaling us with stories—“All of a sudden, we lost ignition. We didn’t even have time to get out of the car. There were Mexican guys all over us, getting the engine open. Sanding our points!” If we’re going to be stuck 25 miles into a 500-mile race, this isn’t bad.

Every now and then there’s a puff of dust rising off the ridgeline opposite us. Cars getting free of the silt, one at a time and at an agonizingly slow clip. To the south of the drivers there’s another cloud in the sky. This one’s growing. And it’s not tan like the dust cloud, but white.

“Is that a wildfire?”

A gang of dirty faces, grouped around a handheld radio, laughs. “It’s on course, we’re driving right through it." At least my water’s still cold. Co-driver Tony and I wait out the rest of the time in the shade of the truck. He’s the only guy I’ve ever known to nap ahead of racing through a wildfire.

After an hour we try the hill. It sucks. A sheer, silty sand trap. My ineptitude has us bogged down in no time. A giant, diesel 4x4 backs down the precipitous ruts, its bed packed with the filthiest, dirtiest dudes I’ve ever seen. They unload, hook us up, and pile into line behind the VORE truck, shoving as the truck lugs us up the slope, wheels spinning dirt into their faces. They unhook us. They wave.

It’s wild to be back racing after sitting around at the Silty Hill Social Club. Letting racers go one at a time has made the chase fun. Over the ridgelines, then down their knobby spine. Back to the mantra: “Take it easy, take it easy.” It’s rough country made rougher by the mighty, high-horsepower sons-of-bitches that dig out deep trenches when they accelerate, and build towering berms when they throw over the wheel. Every now and then the berm takes us high enough that we can see over the scrub sage and spot dust or twinkling taillights. We’re reeling them in. The brush fire, too.

Back home in California a wildfire would attract attention. One of this size? At least two dozen firefighters, a couple of water-bombers, and a handful of news helicopters. Here? Nobody—not a traffic cop or abombero for miles.

The fire is on its way to burning itself out when we go ripping over the charred earth, but racing through a wildfire’s still novel. We’ve picked up our eye in the sky, as well. Mike Self, the owner of VORE, is flying overhead in a pretty, stickered-up little Robinson R44. Its shadow dances across our path and I can’t stop laughing. Imagine the race as much as you like. Follow it, crew it. But you’ll never truly understand it until you put in a stint behind the wheel and try to keep your idiot joy from overwhelming you as a helicopter chases you through the scorched Mexican desert.

The light gets long and low. It’s beautiful. Baja has the best sunsets in the world. We don’t stop, but we can’t help admire the view. Descending from the mountains has us back in agave- and cactus country, and they cast long shadows over the course. The VORE helicopter has headed home, leaving Tony and I to the work of chasing down Beetles and UTV’s.

Long fence-lines, stretches of pine. Baja's diverse climates and terrain are what make it great for racing. They also make it hypnotic. Tony is over the intercom less and less, just breaking the trance occasionally to spell out what’s important. The little VORE truck is running like a champ. A little louder, maybe, but 70 miles into my 100-mile stint I’m beginning to feel like my fears of handing a wadded-up truck off to my teammates were unfounded.

Then our skidplate opens up.

We’re back in the silt when a bolt lets go. It’s just one of those little things—the center bolt on a skidplate. But all of a sudden great gushes of sand are filling the footwell. Every time we plow through another silt crest, there’s another bucket of warm sand over my shoes. And we’re plowing through the silt constantly. We pull to a stop and a small army of helpful Mexicans descends on us. Half the silt and soil in Baja has packed into the skidplate and it's opened like a mouth, shearing that bolt and threatening the others. Tony and the Mexicans shovel as much of it as they can, but it's packed in like concrete.

Mysterious stuff, Baja silt. If you hit it at any kind of clip it goes over you in great orange waves and seems never to come back to earth. You can’t see through your own visor to tell where you’re going. Fortunately, the odds of you getting there fast are slim. In the worst of it you just bury the throttle and hope. Thank god for Tony’s voice in my ear. Wheels spinning, he kept saying, “Stay in it, stay in it.” Then the revs started to climb, like the wheels were spinning easier. Like we were digging down, not forward. I backed out of the throttle just a hair before Tony set me straight. “DON’T GET OFF THE THROTTLE, WE’RE STILL MOVING.” He shouted over the racket.

For an instant the silt cleared and I could see he was right. Out his window, dunes of silt crept by at an agonizing pace. All my senses were still telling we’d come to a stop. Without him we’d still be trying to dig the truck out. The recently abandoned buggy we passed in the same pit is probably still there.

We find Pit 2 at dusk, the soft light making navigation a burden. For Victor, taking over the driver’s seat, there will be far larger challenges. But my job is done, and somewhat successfully. After a hundred miles racing the Baja 500, I’ve handed over a running truck. It was all dumb luck, and slow, cautious driving, but I’m proud of it.

With the sun set and the stars coming out, I celebrate with a Mexican beer and as much Gatorade as it takes to make the silt in my mouth go away. It feels good. The steady cadence of broken buggies and UTV’s tells me that others haven’t been able to trust their luck.

By the end of the night, neither will we.

An 8-Year-Old Was Killed at the Baja 500 on Saturday, and it Was Completely Avoidable

It’s a beautiful day in Mexico, and I’m scared witless.

The Baja 1000’s Days-Long Sprint to the Finish