The realtime madness from The Drive on the front lines in Monterey. 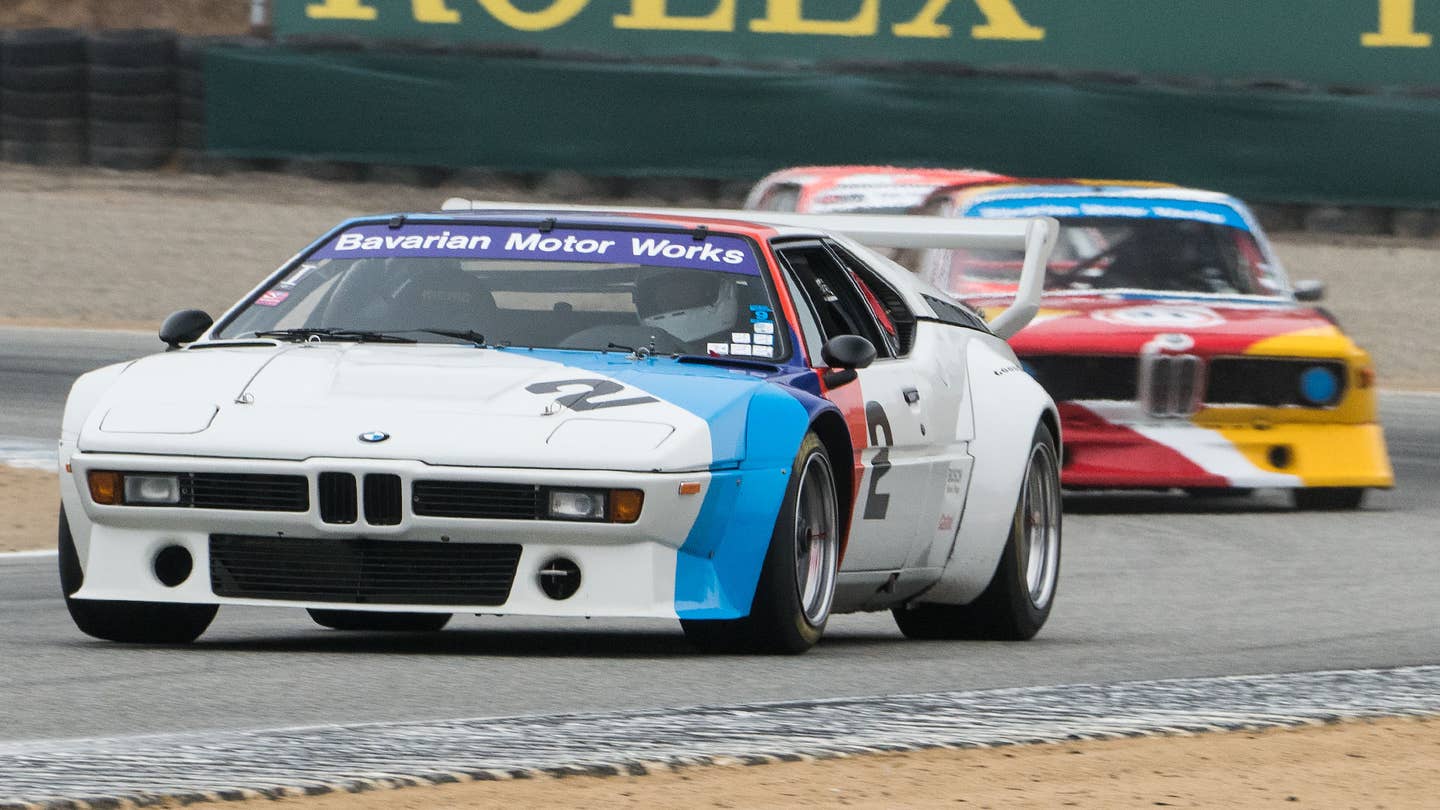 1pm: In the Paddocks at Mazda Raceway Laguna Seca.

Michael Summers is sitting with his Lotus 23, the most successful racing sports car Colin Chapman and Lotus ever built, and one of my all-time faves. Summer had the car out on track already today. How much does this guy love motoring? He’s got a dog named Vespa, and he’s wearing Lotus livery Pumas. His car was built in October 1962; its first race was the 1964 Los Angeles Times Grand Prix at Riverside. Summers actually saw this exact car compete at Riverside, when he was a kid. “When I was 14 I was out at Riverside, and I saw this car, the car that I now own 40 years later. I took pictures of it.”

Lotus fans are a particular breed. We like lightweight little rockets with amazing cornering abilities, your ass just inches off the ground. “My car weighs a little less than a thousand pounds only,” says Summers. “It pumps out maybe 165, 170 horsepower, but it’s so lightweight, it’s amazingly quick and agile. So we can actually keep up with bigger cars using cornering speed and braking.”

Of all the cars I’ve seen at the paddock thus far, this might be the one I’d take home if I could.—A.J. Baime

There are probably fifty hotels in the Monterey area, and every one of them is hopping. The luxury joints—and there are many—are unsurprisingly crowded with people on expense accounts. This year that’s where you’ll find most of The Drive’s crew, because there’s new metal to drive and fancy dinners to attend, elbows to rub and suits to wear [ED. NOTE: Cantle brought a blazer]. And that’s great, if you love running into the wealthiest of car owners and heroes of the sport in the hotel bar. I can’t knock it.

The less fancy establishments, your motels out on Fremont Boulevard, your crumbling beachy establishments in Seaside, or your traveler’s hotels in Salinas—that’s where you find the race crews with their single-car trailers, unrestored Porsches and their hard-used old formula cars. It’s these funky old motor courts where the heart and soul of the Monterey weekend really is. Where guys in oily shirts gather and bullshit and get a laugh out of this weekend of excess.

It’s another attempt to minimize my obligations this year. A serious and thinly veiled effort toward enjoying the weekend by being less beholden to the infernal schedules that make it so damned busy. You could, if you tried, fill every waking minute with an event in Monterey. And I have. But it left me, a true believer in cars being good and fascinating, totally cold. It turns out that if you get lured into thinking you ought to see all of it, you’ll never come away wanting more.—Chris Cantle

When Jackie Stewart walks by your vehicle on display and is so taken with it that he asks to hear the engine, you oblige the man. When your V12 fires up and Sir Jackie beams broadly and says, “Never change this,” you’ve won all the winning. That was the case for Andreas Mohringer, an Austrian pharmaceutical giant, and his utterly incredible 1953 Ferrari 375 MM Pinin Farina Spyder. We stole a few moments of Mohringer’s time so he could regale us with the backstory of the only un-restored example of the 375 MM left in the world.

The Drive: How did you find the car?

Mohringer: It was in January of 2010 and I was on vacation in Baja when I was tipped off that this very car had become available. I wasn’t looking, per se, but when I heard about this, I immediately went out and bought a computer there in Mexico just to be able to check out the chassis numbers and make sure they were legitimate. They were, so I sent Paul Russell, famed restorer, to inspect the car on my behalf. He kindly made the trek from Boston to New York City on a snowy afternoon, and reported back that it was worthy of purchase. So I bought it, sight unseen.

Who was the prior owner?

J.B. Gunn, or Ian, as he was better known. He was a British physicist that lived in America, and was a huge car collector. He actually campaigned this car at Watkins Glen in the Seventies, but it suffered a brake failure and he was so fuming with the car that he garaged it on blocks for a number of years. It was never raced again. He passed away a few years back and I bought the car from his estate.

That’s incredible. Do you have all the notes on the car?

Yes. Ian kept meticulous notes but it also came with scores of other information. Its first race was in 1953 at the 12 hours of Sebring, where Bill Spears drove it along with Phil Hill. They were leading until the rear axle broke and they had to retire early. It ultimately won a number of races, and even won a National Sports Car Championship President’s Cup. I have photos of President Eisenhower with the driver. It’s quite storied.

How often do you drive it?

About three or four times a year. The first time I ever drove it, I immediately thought “Well, this is quite powerful.” You have to respect the age and originality – and also remember you’re dealing with drum brakes from the Fifties. [Laughs] But it’s an absolute wonder to drive. It sounds superb.

Would you race it again?

No, it’s too valuable now. It’s the only unrestored example of it’s kind left.

Would you sell it for the right price?

What was the process like to get it running again after 40 years?

You’d have to ask Paul Russell. [Invites Russell to join us.] Paul, how did the restoration go?

Russell: Gently. The engine is a 4.5-liter V12 Lampredi. We first cleaned the mouse nests out of the intake manifolds and then checked all the cylinder liners, since they’re screwed right into the heads. There’s a lot of coolant flowing around so it’s possible to have some corrosion in the castings. We didn’t want to have to take the engine down to pieces—we’d gingerly wrench the crankshaft to see if everything was turning properly. The process took about half a year.

The finished product was clearly worth it.

Russell: It was. Andreas showed the car at Pebble in 2010 and then he invited Ian Gunn’s three daughters to come for the experience. And they were great because they ended up regaling the crowd with tales of growing up with the car. As they grew up in their teens, and the ladies began dating, Mr. Gunn would invite the prospective gentleman suitors for a ride in the 375, just to see what they were made of. He’d caution them not to come back with wet trousers. Then he’d take them for a white knuckle ride they’d never forget.—Sean Evans

7:45am Prepping for the Race at Laguna Seca

This afternoon, Lawrence Ulrich will take the wheel of the BMW M1 and battle marine layer fog, moisture on the track, the vagaries of heel-toe braking, and all the other 45 cars in the 1973-1981 FIA and IMSA class.

This includes a seven-strong contingent of Porsche 935’s. Cranked to roughly 700 horsepower, compared to 480 for my Giugiaro-designed M1, the 935s dominated at Le Mans and won the 24 Hours of Daytona six years running. There are Porsche RSR and RSR 3.0 Carreras, a racing Datsun 280Z. On the homegrown front, there’s an ’82 Mustang, a ’76 Corvette and ’77 Corvette Greenwood. I’m definitely loving the blurry, nostalgic view, and the unholy wail of the BMW’s 3.0-liter inline six that’s nestled behind my helmeted noggin.

7:35am Because Everyone Should Have a McLaren P1 For Breakfast