When Ocean’s 11 Met Pebble Beach: How To Steal $10M of Cars During Monterey Car Week, Part 1

My plan to become the Thomas Crown of internal combustion was quite an affair.

“You can never be overdressed,” said Inga, “you might need a bathroom.”

“I’m sure there will be enoughbathrooms at Pebble Beach.”

“There are never enough bathrooms, especially where there is money. The sinks get better and the towels are cloth, but there are half as many stalls, and such people take twice as long. I think just to prove they can.”

I was counting on it.

Inga was a survivor. Gorgeous, vain, judgmental and condescending, she had German-accented fluency in five languages. She was Audrey Hepburn with a bleached crewcut and two switchblades, one for a tongue, the other in her purse, for cutting cheese. She also carried a pocket ashtray, $39.95 at the uptown MOMA store. She’d never earned a dishonest dollar, what dollars she’d earned. She’d also never passed up a guest house in St. Tropez or Gstaad, even if she had to drive twelve hours non-stop in her 2005 Boxster S. Whenever she disappeared for too long, there was a truer story than what was told, or a man whose real name wasn’t Laszlo Kiss, and often both.

She would be the perfect accomplice for what I had planned:

The Ocean's 11 of car theft. The Thomas Crown Affair of internal combustion. The biggest heist in automotive history. From the Pebble Beach Concours to The Quail, the Concorso D’Italiano to the Legends of the Autobahn, Monterey Car Week had everything a car thief with taste could possible want. How many cars could I possibly “borrow” alone? How many cars would I need to move to a happier home to reach my $10M goal? Would I need a friend? How many friends? A crew and an 18-wheeler? Whom could I trust? Were the local police ready? The CHP?

If only Inga wasn’t my mother.

“Make sure, my dear, to bring the scarf I bought you last year—”

“—because it gets very brisk in Monterey. The white one, with the blue mermaids. It makes you look more European, which you are, darling. Also, your neck is getting fat. You don’t want to look too much like that man from the Swedish supercar company. Or maybe you do.”

“Perhaps,” she said, “I should join you there.”

“I think that might be a little too conspicuous.”

“Daaaaarling. The oooooonly way one could ever get away with sooooo many crimes is to be as obvious as possible.”

“Let’s move on. Do you think I should make fake business cards?”

“No. No, no, no. Your alibi will be that you were writing a story for the car division of Time, Inc., and that someone is impersonating you. This Pitbull person will be there no?”

“You think I should hide in plain sight, disguised as Pitbull?”

“We begin with that. It is absurd, yes, and will confuse the suspicious. Now, I have got some other ideas—”

Step #1: What’s The World’s Best Car For Stealing Other Cars?

It must look expensive. It must be expensive. It should be as quiet as possible — preferably silent — for overnight scouting of the driveways and private garages of collectors’ passed out in their remote AirBnB rental homes. It should have a tow hitch, you know, for towing a trailer carrying a car you’ve just stolen. Or ditch the trailer. How about just for towing? There are only two cars that fit the bill, and they’re both made in Fremont, California. Granted, the Tesla Model S is not intended to tow anything, nor does Tesla endorse this or sell a factory hitch, but where there’s a will and a press car, there’s always a way, as I learned on the Mille Miglia.

I half-packed my bags for SFO — leaving room for as-yet unpurchased elements of disguise — Ubered to Tesla’s HQ in Palo Alto, borrowed a pristine white Model S, drove to the Fremont factory for a tour, collected as many Tesla business cards as I could, then silently headed toward the Supercharger in Gilroy.

My real destination? The outlet mall attached to it.

Why did I gather so many Tesla business cards? Certainly not because I intended to contact them.

Whether you need a bathroom, want to crash a party, get a table at any restaurant or steal exotic cars from one of the world’s most prestigious automotive events under the noses of America’s 1%, it all starts with your outfit.

The high-end car thief during Monterey Car Week must look wealthy and be recognizable at a distance. The outfit must also be instantly reconfigurable for relative anonymity, if not assimilation into the local workforce, a workforce whose job it is to cater to the 1%, the latter a group I’ve found easy to fool since graduating from Horace Mann, where I was the 11th poorest kid at the yacht club. Trust me, the majority of Panerai and Breitling wearers can’t tell a fake, which was something I liked to test at Bentley parties I was no longer invited to. I intended to try that again, as well.

Here I am at the Pebble Peach Concours cleverly disguised as a “young fogey” car collector, as described by fashion critic and bon vivant Jared Paul Stern, who declared me the 10th most stylish person at Pebble Beach, right behind Sir Jackie Stewart and Fiat heir Lapo Elkann.

Let’s deconstruct this outfit by cost and source:

No Name Pocket Square (Found in my house after a party)

Total outlay: $245, which I think is less than the cost of the cufflinks of anyone else on Jared Paul Stern’s list.

Now here I am in the same outfit at the Ferrari cocktail party at the historic gas station off Highway 1 they converted into a pop-up store, party space and owner lounge:

You’ll notice I’m standing in front of the Ferrari Concierge desk, right in front of what appears to be a security guard, and a young woman whose job it would appear is holding the guest list. It would appear. Who knows? And who knows whom he or she thought I was? I was too busy being mistaken for the concierge, which required no more than removal of my hat and repositioning myself behind the desk.

But we’ll get to that — and how much I took advantage of any misunderstandings caused by this — later.

Monterey Car Week is too big for anyone to remember everyone. It was keenly important that I appear to be everywhere at once, yet maintain visual flexibility such that I could have two different looks at the same event, executable with but one mere garment swap.

And so I bought one a more item at the Macy’s outlet, a $64 white dinner jacket with matching $4 black pocket square, which enabled this look...

...call it “Concierge 2” or “Cuban Exile Son”, instantaneously switchable to “Pitbull” by removing the tie and switching to a pair of 1972 Italian “Revue” glasses with brown fading:

You won’t believe what happened next.

Continue on to Part 2 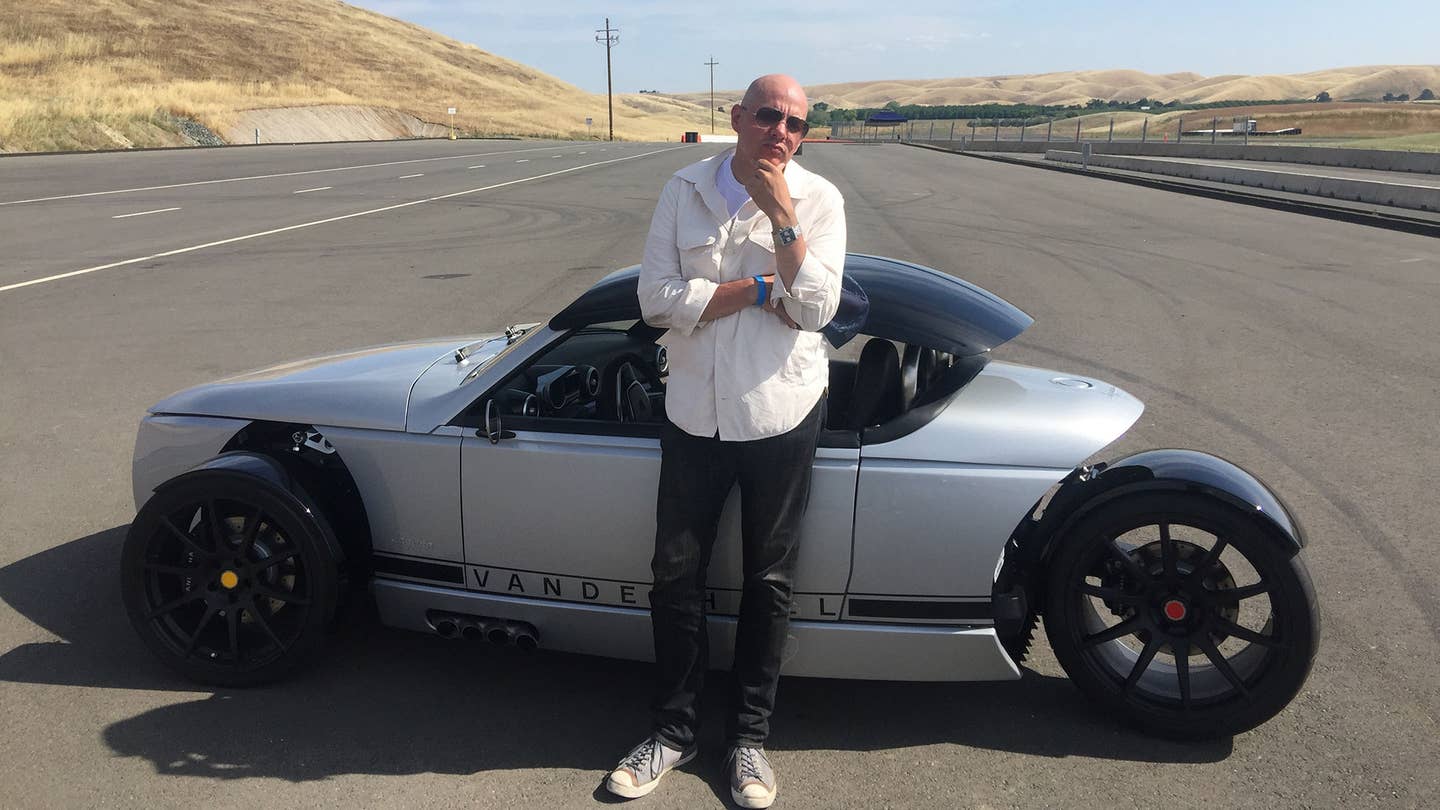 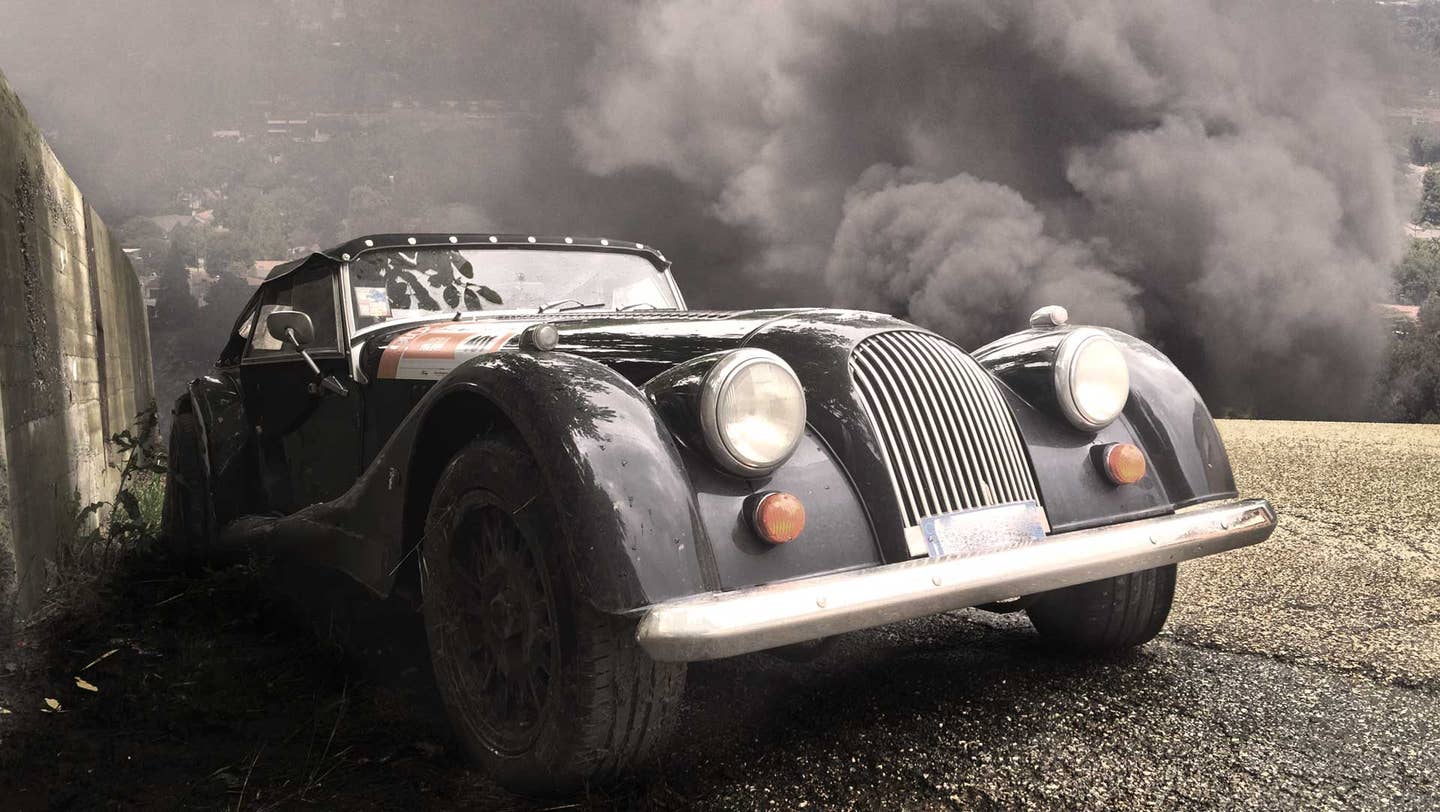 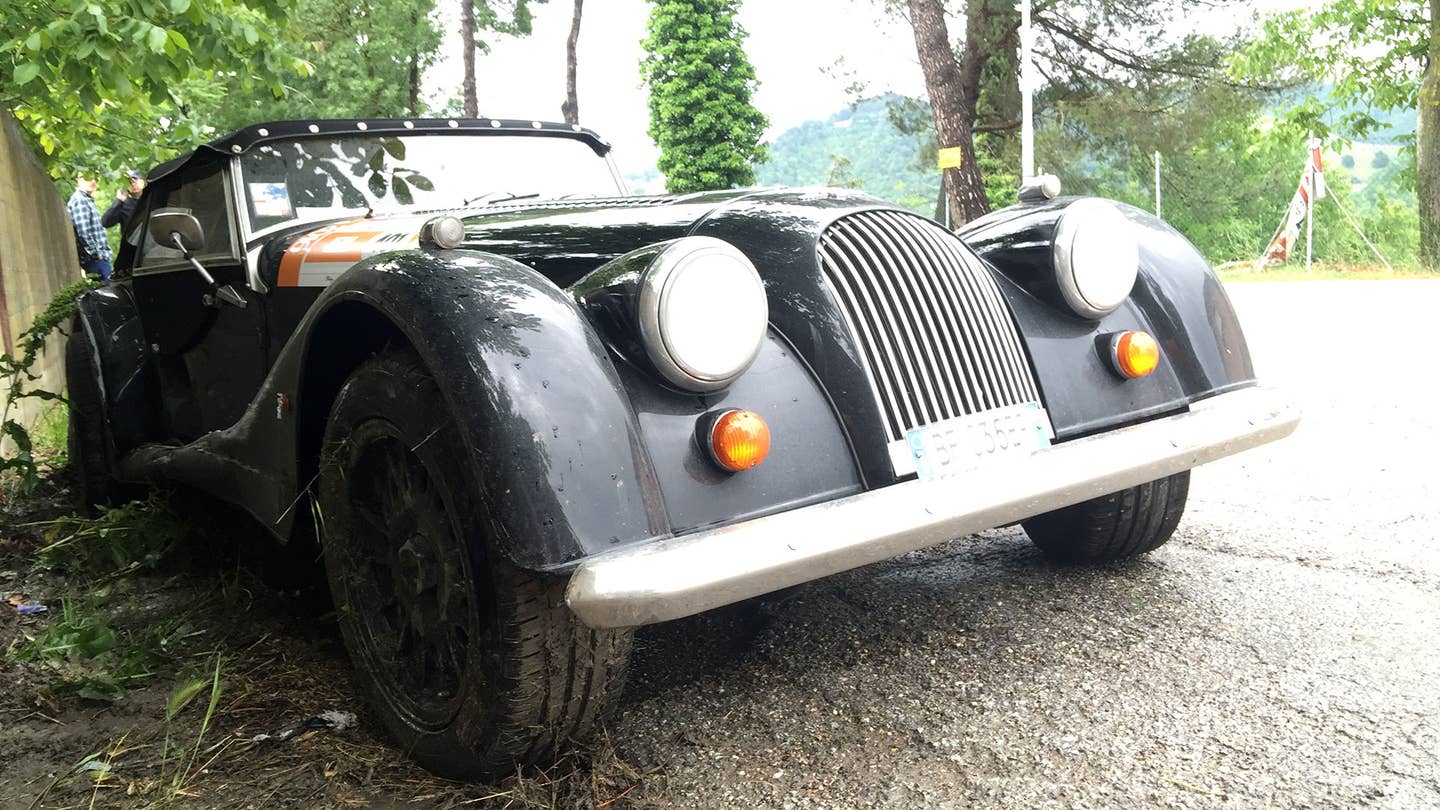 How to Crash the World’s Most Dangerous Rental Car

For us, the Mille Miglia starts in a smoke-filled room and ends in a twisted heap of Morgan +8. 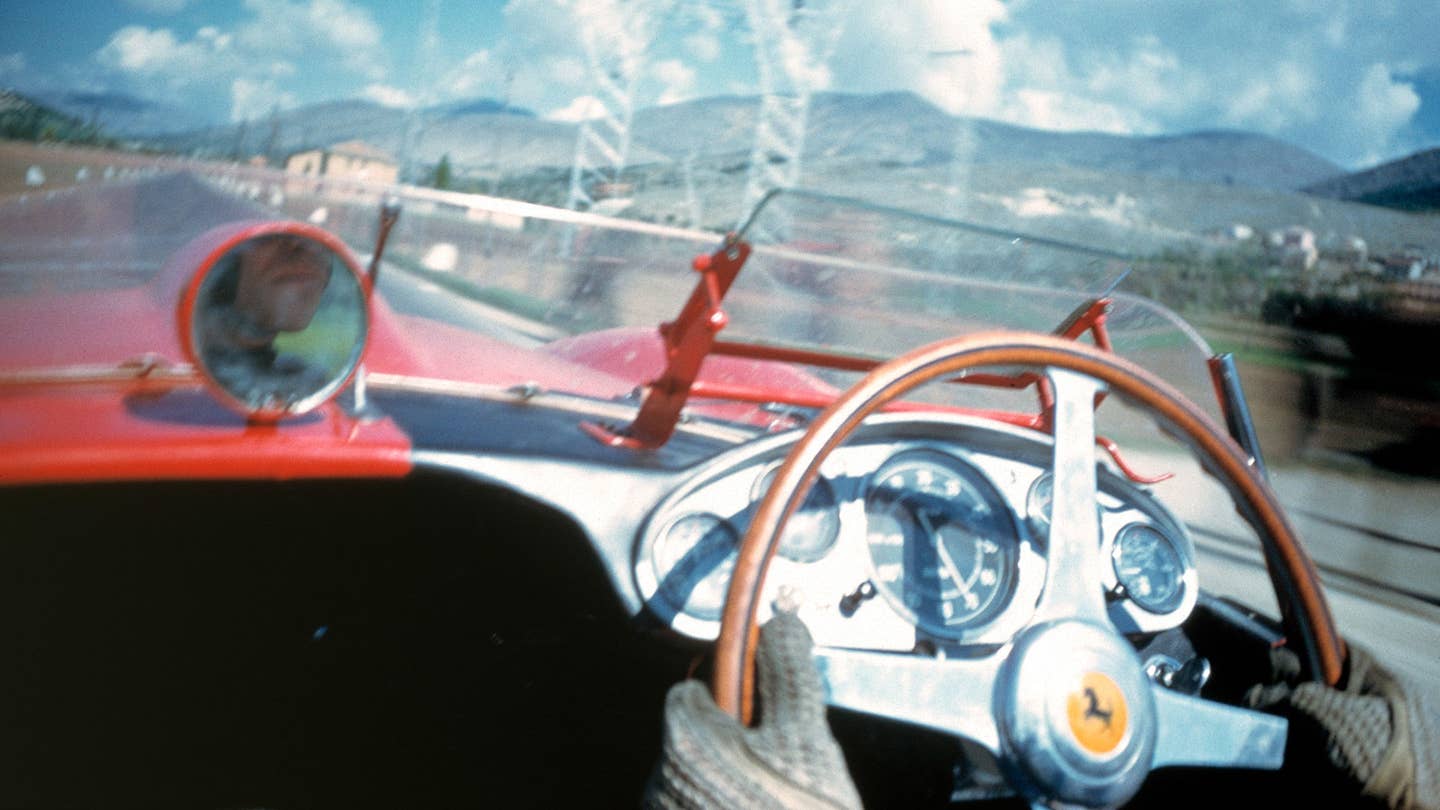 Rally Diary Day 0: How To Enter The Mille Miglia For Free, Or Close To It 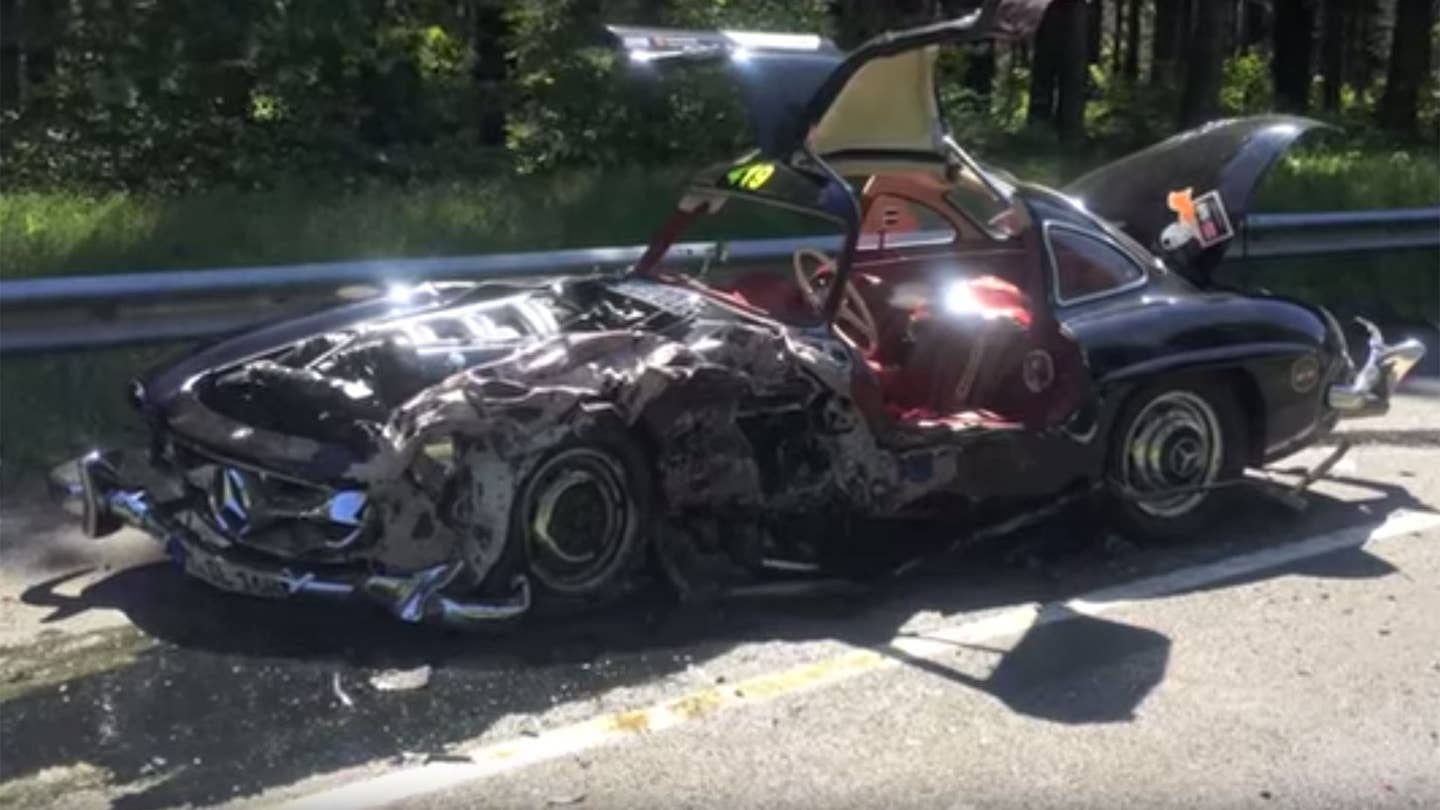