The Thomas Crown of Internal Combustion: How to Steal $10M of Cars During Monterey Car Week, Part 2 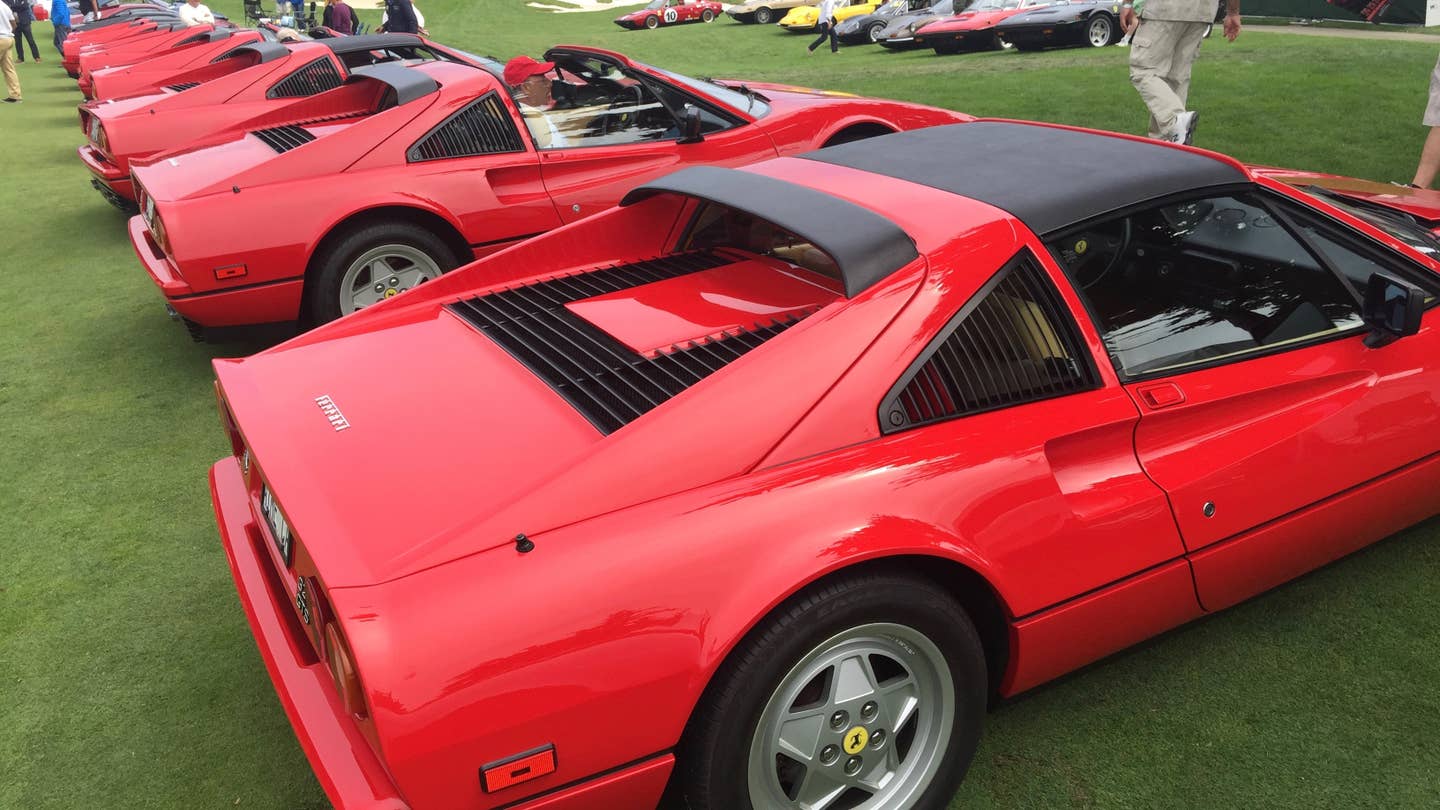 This is Part 2 of my investigation into how one could steal $10M of cars during Monterey Car Week. I strongly recommend reading Part 1.

There she was. My stunning Ferrari 328 GTS, sitting at the end of a row of her sisters at the Concorso D’Italiano, just one of numerous events at Monterey Car Week where I had cars on display. I stood by her for hours, answering questions and accepting compliments on her behalf, desperate to take her home.

That might be an issue, because she wasn’t actually mine.

My name wasn’t actually on her title. She legally belonged to someone else—probably the guy in the Tommy Bahama shorts, many-pocketed safari shirt, and Ferrari-branded red jacket and baseball cap, his legs splayed out in a $19.95 K-Mart folding lawn chair—but she was mine in every way that counted.

She was mine in my heart.

I’d dreamed of her since putting the poster on my wall in 11th grade. I didn’t care if that guy paid for her; he didn’t deserve her. Cash payment isn’t ownership. If he truly loved her, he would have dressed up before taking her out for her big day. Everyone who saw me next to her knew she mine, or they wouldn’t have ignored the legal owner and walked up to me instead to praise my good taste in salmon corduroy jackets from Italian outlet malls. Also, my taste in cars.

It wouldn’t be long before she’d know a better life.

All I had to do was wait until late afternoon when the Concorso was over, then, when the man I assumed was the owner went to the bathroom, summon the locksmith I had on call. The nearest bathroom was a one-minute walk and, as with the end of all such events, a ten-minute wait. Add the return trip and I had at least twelve minutes. Would the legal owner be in the bathroom thirty seconds? Two minutes? Five minutes? I’d have to watch his food intake. He looked like a man who took his time. The bathrooms were close, but a wall partially blocked the sightline from the car to the Portosans.

Would I have enough time to replace my distinctive salmon jacket with a red one similar to the actual owner’s, then have a man I’ll call "Lachlan Smith" start the car? Smith had done this many times; lost keys are a profit center for Monterey area locksmiths, which is why they’re always eager to help owners with out-of-state plates and no paperwork—especially on the lawn of the Concorso. We Tifosi were all one big, happy family, especially once I’d put on a red polyester jacket emblazoned with big yellow letters spelling out F-E-R-R-A-R-I.

Once in gear, I’d be difficult to stop.

It would be good not to be arrested. I hadn’t been arrested in years. It was just declassé. Also, horribly inconvenient. I had a party to attend that night. Several parties, in fact. And more cars to scout, to rescue from their legal owners.

The decision tree of crime had been well fertilized.

What if I was caught? Lachlan wouldn’t tell me, but I’d heard there were only a couple of keys per model per year, at least back then. I could reasonably say I mixed up red 328’s. Several people told me it had happened in the past, but it was hard to believe Ferrari would be that amateur.

What if she broke down? It wouldn’t be the first time that had happened at a car show. Simple. I’d just flee. Ditch the pink jacket, and the red jacket, and put on the white jacket I’d brought as part of my Pitbull disguise:

It would be a perfect time to stroll down the row and find another car. If one 308/328 broke down on the way out, it was certain other owners in line would stop to help. The likelihood one or more would leave their keys in the cars? One hundred percent. I’d already seen it last year. Voila! Free car.

Not really free. I’d invested years in coveting her. I could lecture for hours on all the things Tommy Bahama guy had restored, at great expense, then spat on by showing up to their date in that outfit.

None of my four ex-fiancees would have put up with that kind of disrespect.

I wasn’t going to steal this car, of course. Not because it would be hard, but because it would be too easy. Also, too cheap. A $65k Ferrari? It was beneath me. I was in Monterey for the big score. I wanted to know how to steal $10M worth of cars, by means of moving as few chassis as possible.

I wasn’t doing it for the money. This was my fourth such trip to the peninsula, and with every visit the rumble of dream cars un-driven by that 11th grader grew louder in my soul. I had no desire to fence this Ferrari, let alone strip it. I merely wanted to drive it as it was meant to be driven. Based on its cleanliness (and the razor-edged delineation of its Bridgestone Potenza’s grooves) this thing had never gone faster than the flow of traffic—and even then, only to the detailer—on its way here.

She deserved better. But then again, so did I. A Ferrari 250 GT, perhaps.

How could I be so brash? Because I had already sussed out the odds of getting away with it.

With my Time Inc. business card in my hand and car theft in my heart, I walked into Monterey Police headquarters. I wanted to know what I was up against. Wearing a $245 outfit that appeared to be worth ten times as much, I marched up to the counter and asked to speak to whomever was in charge of dealing with the press.

“How can I help you?” asked Sergeant Earnest (not his real name). Unlike the desk manager, general manager, and valet at the four-star hotel where I had a room I wasn’t paying for, Earnest was not impressed with my salmon corduroy jacket or white straw hat.

I, on the other hand, was very impressed by his armored-up, buttoned-down, top-of-the-line, black-on-black-on-black tactical getup, the latest in Gestapo chic in a town so safe his gun and taser holsters showed no signs of use.

“I’m doing a story about car theft,” I said. “In Monterey. During Car Week.”

He looked at me quizzically.

“Surely,” I said, “with thousands of exotic cars worth tens of millions of dollars here for a week, there’s got to be a lot of car theft.”

“We don’t really see an uptick in theft. Not more than the usual Camrys and Accords.”

“Do you assign extra units to guard the cars? At the Concorso D’Italiano? Or The Quail? Or Pebble?”

“Not really. Our biggest problems are traffic, and CHP handles most of that.”

I’d have get in touch with CHP, map out their locations and figure out the best exit route from the Monterey peninsula.

“Interesting,” I said. “Let me ask you another question...”

30 Hours Later, at the Concorso D’Italiano

“That’s the dumbest plan ever,” said my old friend Eric Minoff, the best dressed man under 40 at Bonham’s Auctions. I only shared my plans with him because he, too, was a member of the Madison Avenue Sports Car Driving & Chowder Society, whose monthly luncheon at Sardi's—a formerly posh but still expensive restaurant in midtown Manhattan where long-dead celebrities’ caricatures line the walls—is attended by dozens of semi-alcoholic, (seemingly) retired car journalists, former automotive executives nostalgic for the behind-the-scenes excess of the malaise era, the organizers of the Greenwich and Amelia Island Concourses, and speakers as notable as Tom Dupont and as questionable as yours truly. The audience was expected to throw stale bread at the host whenever they were bored. Bread supplies often ran low.

I wasn’t worried about telling him. I was sure he didn’t believe me. I also had the best alibi: I’m Alex Roy. I don’t need to steal a car. I told everyone in advance I was doing a story about it. My editor, Eric Minoff from Bonhams, even the police. And I don’t have the car in question. I have a Tesla press car.

OK. Maybe not the best alibi. But one no one had ever heard before. I had already ticked off every box on the socioeconomic, get-away-with-it, white-collar privilege list. Hell, I was the list, at least in presentation. Add absurd alibi? My odds were at least 70/30.

“But,” I said, “you’re a member of the Chowder Society. I thought you’d support this. Even in theory. You know. Stick in the eye. If they’re onto me, I’ll ditch the car after a few hours of driving. Somewhere like In-N-Out.”

“Good luck,” he said, “in this traffic. Let me introduce you to my friend, Mr. Nameless. He ‘looks after’ an important car collection. If you want to steal cars during Car Week, ah, here he is.”

There is absolutely no chance that anyone, in any outfit, of any race or gender, could walk into a party full of bankers, inquire as to the ease of opening the vault, and get an answer, but this is where the banking and car-collector worlds differ, because a little bit of small talk later, Mr. Nameless produced this:

“Dude,” said Nameless, “you don’t need a locksmith. You don’t even need a key. You can pretty much jam anything in there that looks like this. As long as you follow the instructions.”

Lachlan Smith was out of a job.

“Do you mind if I take a picture of that key,” I said, “and the instructions?”

"Prices are crazy these days."

Mid-to-high sevens would get me at least halfway to my ten million dollar theft goal. A couple of these and I had an article. All I had to do was keep them for a few hours and I had a movie deal.

“So,” I said, “where does one store such a car the night before and after the Concorso?”

“We’ve got an AirBnb on the peninsula,” said Nameless.

Mental note: ask every collector I met where they were staying.

“Or,” said Minoff, “you could just go down to the auctions. All the cars have the keys in them.”

More to come in Part 3 of “How to steal $10M of cars during Monterey Car Week” #soon.