AMC’s hit show is back. Let’s take a deeper dive into the best-of-the-worst vehicles. 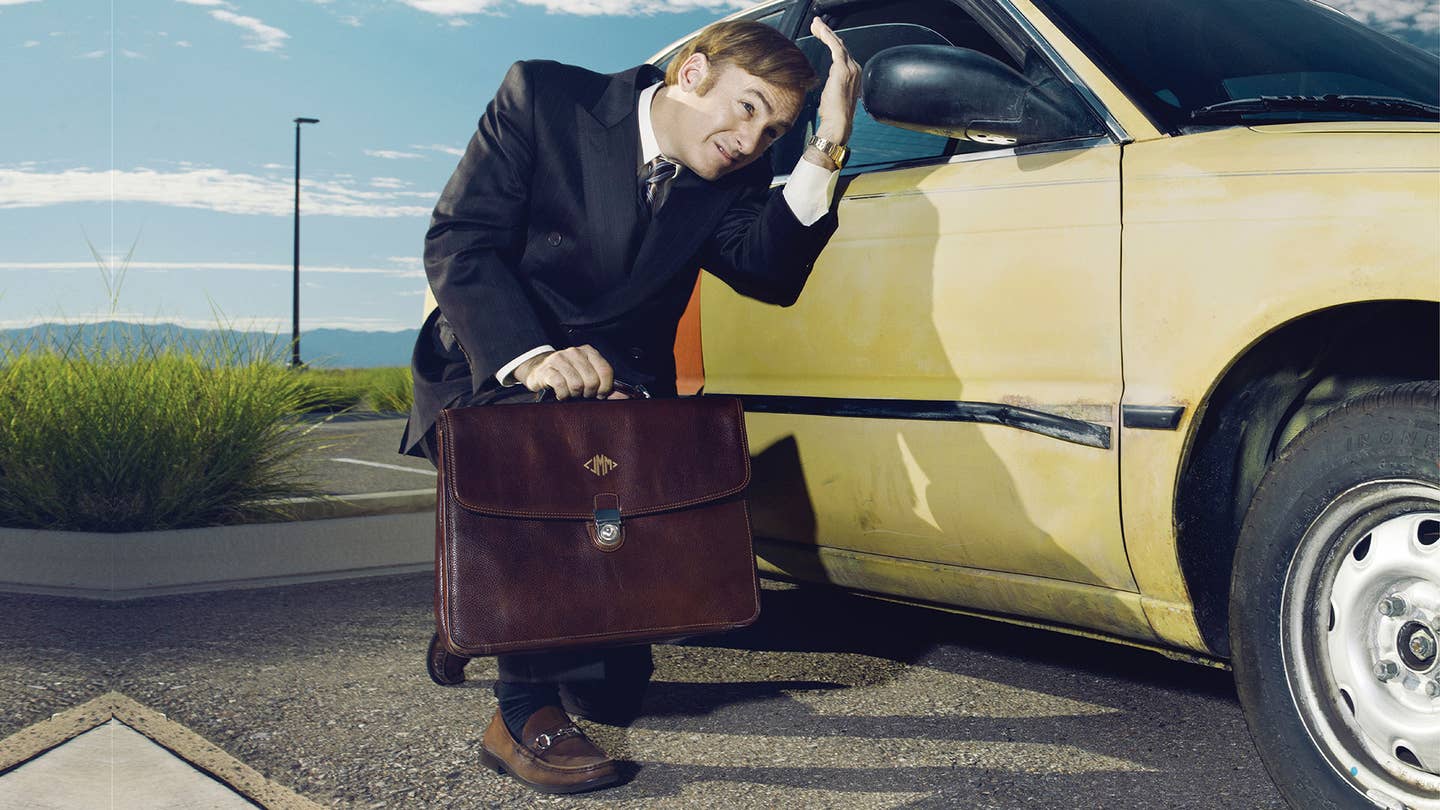 Like its predecessor Breaking Bad, the prequel spinoff Better Call Saul is smartly underpinned by a group of morally conflicted protagonists who vacillate between good and evil. More often, the latter prevails and the dramatic tension mounts as we watch them struggle with the consequences of their bad decisions—including the bland blobs the characters drive. Why not take a closer look at a selection of ramshackle rust buckets, underwhelming family transports and gaudy Hummers that are are featured players in the series, you ask? Well away we go!

We’re introduced to Jimmy McGill’s sad yellow garbage-can-on-wheels after a genius Easter egg; it’s parked next to the same white Cadillac DeVille that a then-established Saul Goodman drove in Breaking Bad. But here, he’s sporting ill-fitting suits, still running small cons and trying to establish himself, and is therefore stuck with the rusty Esteem with mismatched doors, peeling rubber moldings, and the exhaust note of a lung-shot. With a paltry 1.4-liter four-cylinder under the crumpled bonnet McGill can’t get anywhere quick even with all 95 horses surging; new, the trudge to 60 mph took north of 11 seconds. The beater takes one on the chin in the pilot when skateboarders, pulling a scam, slam into it and crack the windshield. They ask for $500, drawing a scoff from McGill, who adds, “Does this steaming pile of crap scream ‘payday’ to you? The only way that thing is worth $500 is if there’s a $300 hooker sitting in it.” The man does have a way with words.

Mike Ehrmantraut isn’t a flashy fellow. The elder, erstwhile police officer who becomes an enforcer for hire, excels at his craft by blending in. No vehicle will draw less stares than Ehrmantraut’s daily, a late-gen Fifth Avenue. The mid-sized box boasted a 5.2-liter V8 coupled to Chrysler’s prodigious three-speed automatic TorqueFlite tranny. That combo sent 140 horsepower to the rear wheels and boasted an impressive 265 lb-ft of torque. Stylistically heinous—that landau vinyl roof added nothing—sales still soared, peaking at 118,000 units around 1986, three years before the line shuttered. Points to producers for keeping the continuity: Ehrmantraut drove the same burgundy sedan during Breaking Bad.

This uninspired brick screams, “I’ve given up on life!” This particular model, driven by a nebbish chemist-turned-drug-dealer named Daniel Warmolt, features faux wood paneling—an option that should only be implemented on Wagoneers. The chatty Warmolt takes it to a drug handoff in the middle of nowhere, exactly where it should’ve been left. Honda’s VTEC 3.5-liter V6 affords 240 ponies, though it’s no scorcher off the line. The ‘02 did best it's sliding-door ilk upon debut, scrambling to 60 mph faster than a Dodge Grand Caravan and a Kia Sedona. But only barely.

Windowless vans are the prime choice for all manner of utilitarian activities, though they’re most associated with criminal endeavors. An tri-colored Bowtie clunker pops up as the trusty steed of gang member Nacho Varga. The G20 is a sublime choice for transporting kidnap victims, ferrying muscle to a drop site, or merely looking menacing to civilians, and Varga employs it well for all of the above. Under the primer-finished hood lies a fuel-injected 4.3-liter V6 (a 6.2-liter diesel variant was also offered, and Californians were treated to a carbureted 5.7-liter V8). Chevy vans didn’t pack a punch under the hood, but with 267 cubic feet of space in the back, there was ample space to smack around your enemies.

Daunted by his inability to secure clients in a gainful manner, McGill reverts to his con artist alter-ego, “Slipping Jimmy,” and enlists the help of the aforementioned skater scammers. They’re to leap in front of a 1988 Mercury Sable station wagon. The kids refer to the car as “brown,” only to be corrected by McGill: “It’s medium sandalwood.” When the Sable and it’s unibrow headlight slip off down the street, the skaters mistake a 1993 Taurus wagon for the mark and fling themselves on it instead. It’s an understandable gaffe as both estates shared Ford’s D186 front-wheel-drive platform and body stylings as well as Ford’s Essex powerplant, a 3.8-litre V6 with 215 lb-ft of torque and 140 horsepower. Also, both were ugly wedges.

Last week’s season premiere marked the return of the supremely annoying Warmolt, though he’d wisened up and ditched the Honda Odyssey. His new chariot? A garish yellow H2, appointed with red flames, spinner dubs, a light bar on the roof, and a vanity plate reading “Playuh.” Ehrmantraut, the muscle for the day, walks away remarking, "this business requires restraint. This [Hummer] is opposite of restraint.” Warmolt runs down specs for the first-gen H2, noting a more lithe body, 325 horsepower V8 and a tri-zone climate system capable of keeping “a girl in a bikini and another in a parka both comfortable.” The monstrosity is sadly incapable of looking cool, and the producers perfectly mated the pretentious ute with an all-too-typical H2 owner.