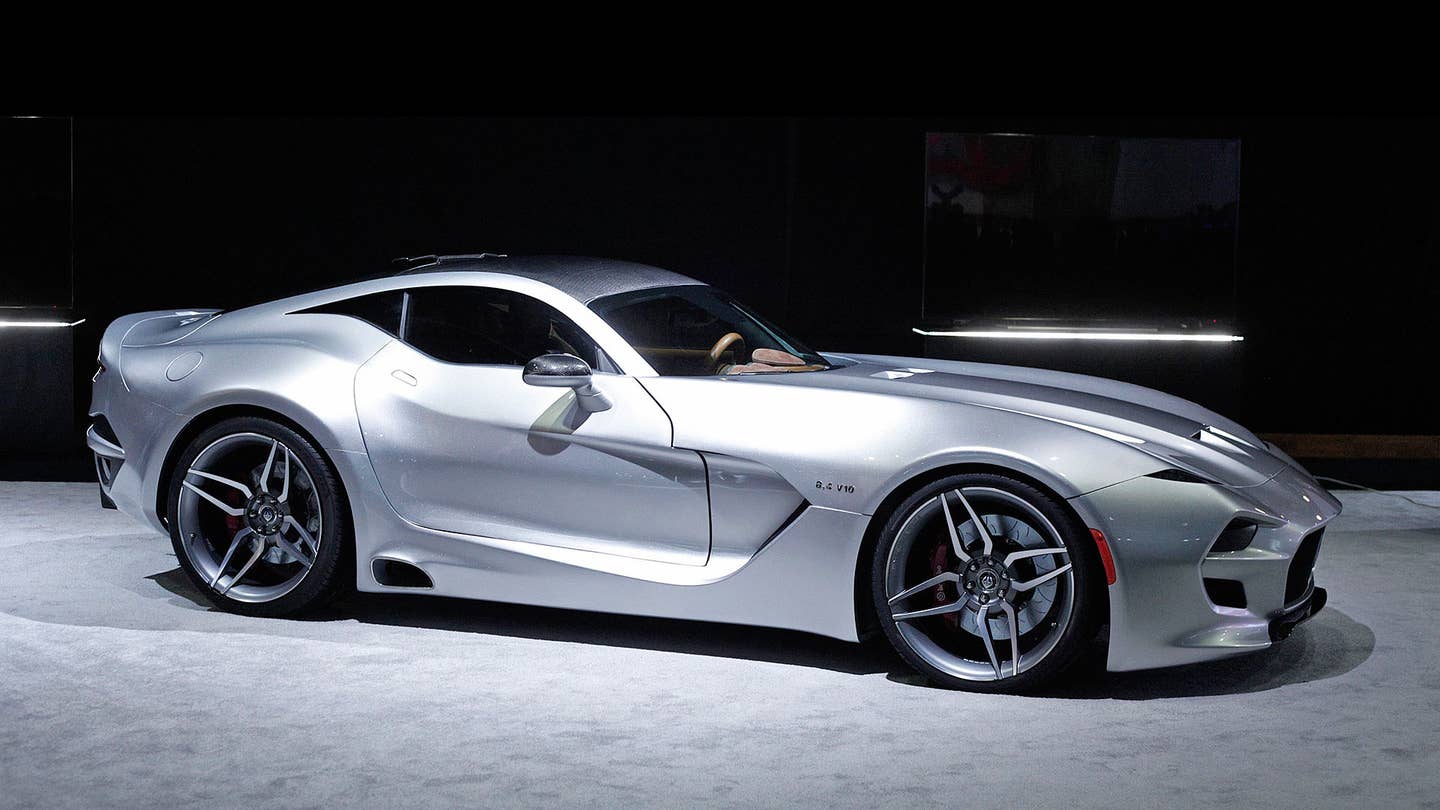 It is difficult to determine whether our interview subject is a genius, an enigma or just a huckster. But we have to give Henrik Fisker credit: He is eloquent and entertaining, and consistently excellent at corralling our attention.

Fisker is most famous for his role in designing the Aston Martin DB9, the BMW Z8 and his own failed experiment in self-branding, the Fisker Karma. But he appears at nearly every gathering of the automotive press with some extravagant and extravagantly priced new concept or limited-production vehicle, showing off its sensuous curves, ingenious application of materials and improbable performance.

And he doesn’t seem to give a shit whether someone—one of his former partners, bosses or colleagues—takes umbrage with his actions. To wit, Aston Martin is suing him for stealing their intellectual property, as Aston Martin recently did when he showed a sketch of his newly unveiled V-10-powered, 218-mph Force 1 Concept, pictured above, which they felt bore an uncanny resemblance to their recent DB10. He calls Aston Martin names and sues right back. He spends more time in court than Marie Antoinette’s handmaid.

"This is a clear case of intimidation, of being unfair," Fisker tells us in an unconstrained one-on-one at the stand of his new ultra-luxury performance car company, VLF Automotive, which joins his unique personal attributes to those of career disruptor/egomaniac Bob Lutz and long-time aeronautical and nautical industrialist Gilbert Villarreal. "It is like with a bully. If you don't stand up to them, they become worse."

He dismisses as without merit Aston's claims, which allegedly grew out of Fisker's release of a pre-production top shot sketch of the Force 1. "It is the same as if I took a shot of the top of your head, and a shot of another person with gray hair and said, you look the same. You can see by looking at the car that it has its own unique design identity."

VLF will also be taking Fisker’s handsome design for his electric/hybrid Karma sedan, implanting a supercharged Corvette ZR1 powertrain and creating a four-door speed monster. According to Fisker’s uncanny market analysis, both of these cars are intended to serve an as yet underserved market for ultra-American, ultra-luxury. "America is still the largest luxury car market in the world. But if you get your big bonus at the end of the year and you want to spend over $200,000 on a car, tell you me what American car you would buy?" Fisker says, posing an intriguing rhetorical tautology. "There isn't one." These custom-built cars, to be manufactured in Auburn Hills, Michigan, at the rate of 100 per year or so, will serve that purpose.

Since Fisker is perhaps best known for his star-crossed venture into the hybrid/electric market, and since the most recent American luxury-car startup success story has been an electric car company, we wonder why he thinks now is the right time for a pair of cars with massively potent gasoline engines. "After all of the excitement and hype about electric vehicles in the past five years, I think we have had a moment to breathe and realize that not we are not all going to be driving EVs right away. There will be a combination of EVs, hybrids and gasoline-powered vehicles for a long time to come," he says. ("Diesel, I don't know about yet," he adds, wryly.) "It's like with salad. Salad is great and we know it is good for us, but you don't want salad all the time. Sometimes you want a steak, or sometimes you want a dessert. Our company, we will stay away from the salad. We will do the meat and the dessert."

He continues in this same indulgent vein in discussing autonomous vehicles. "And, maybe we will install a camera in front to allow us to identify and stay away from self-driving cars," he says, "because they drive too slow and they brake for no reason."

Fisker claims that VLF will be delivering its first cars to customers as soon as next month. So we decide to shoot the moon and finish our delightful ideation exercise by asking him what other vehicle category he believes would be best suited to the future expansion of the VLF agenda. He responds right away. "America and American car companies invented the SUV. But there is no American SUV in the ultra-luxury market, though there are a host of new European manufacturers introducing vehicles in this category--look at Bentley with their new Bentayga, and others. I think there is definitely room for a super high-powered, ultra-luxury American SUV to compete with these."

Now, we can't wait for the Geneva motor show in March, just to see what Fisker and his new crew might pull from their bag of tricks.  A supercharged, suede- and wood-lined Escalade-V-esque kind of unicorn sounds more than a little appealing.