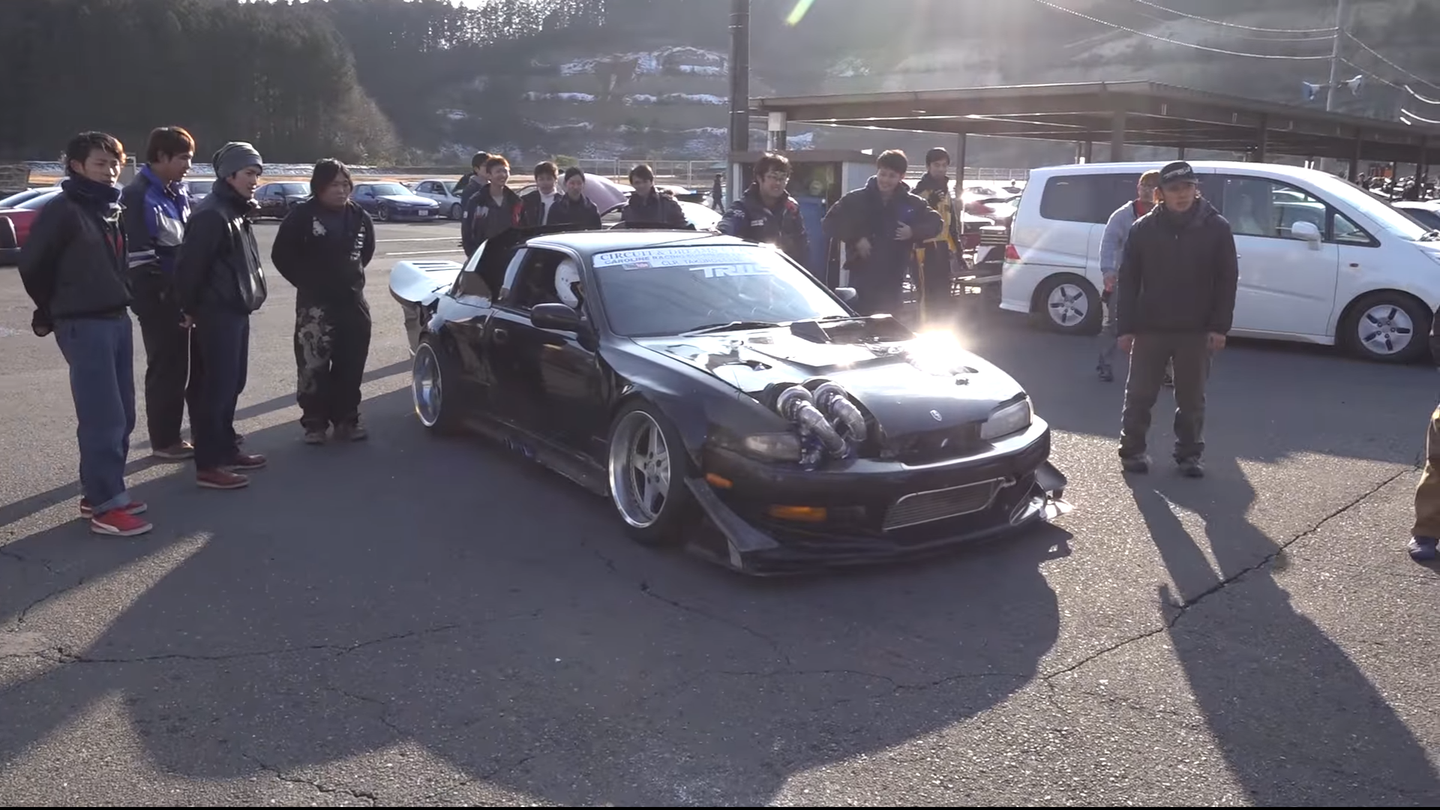 Hidden within the outskirts of Tochigi, Japan is an obscure shop known as Caroline Racing, run by an interesting fellow named Takuro-San. Caro-what? Taku-who? The names don't sound familiar now, but you'll probably remember them after you read more about this quad-turbo 2JZ-swapped S14 Nissan Silvia.

Alexi Smith of the Noriyaro YouTube channel paid Takuro-San a visit in his latest video and shared a closer look at this monster S14. According to Takuro-San, the quad-turbo Silvia features a twin Trust TD-06 turbos spun up by the 2JZ engine, which feeds the twin Trust T-88 turbos, the biggest sized turbos available from Trust. One of the T-88s acts as the main while the other is linked to a secondary throttle body that can be modulated via hand-controls.

Taking a glance back in the cockpit, there's what looks like a shifter from an automatic transmission repurposed as a "thrust lever" attached to the left of the center console. Sadly, Takuro-San mentioned the secondary turbo is not yet ready to run.

If the quad-turbo S14 doesn't already sound overly-complicated, it has one more trick up its sleeve: a miniature jet engine on to increase downforce on the spoiler, as Takuro-San explained. Yes, it's literally a tiny turbine mounted to the trunk that's pointed towards the ground.

After Takuro-San showcased his insane project before a crowd at Nikko Circuit, a guest was picked for a special ride-along in a game of rock, paper, scissors. The ride-along didn't look too promising at first – not even a push-start was able to get the S14 running, and the car had to be towed around the track before the engine managed to fire up.

But once things were moving, we got a taste of just how terrifying it must be to get behind the wheel. The quad-turbo Silvia clearly produces way more power than the tires could handle as it spun its wheels on every straight and broke traction at every corner. Unfortunately, the motor eventually started to have issues that caused Takuro-San to end the demo prematurely.

It's important to note this monster S14 isn't the result of a team of experienced engineers, but is the wacky work-in-progress of one ambitious backyard inventor. Takuro-San admits there are kinks that still need to be smoothed out as he ran out of time necessary to get the jet-powered downforce generator to work. The car also suffers from power-steering issues and other rough edges.

We definitely want to see how far Takuro-San can develop the car in the months ahead. What's more, a tour around Takuro-San's workshop revealed some of his other intriguing plans too, including a massive jet engine that may find its way in a car.

"I've seen jet-powered cars overseas, so I wanted to try driving one too." Don't we all. Check out Takuro-San and his quad-turbo 2JZ Nissan Silvia in the video from Noriyaro below: