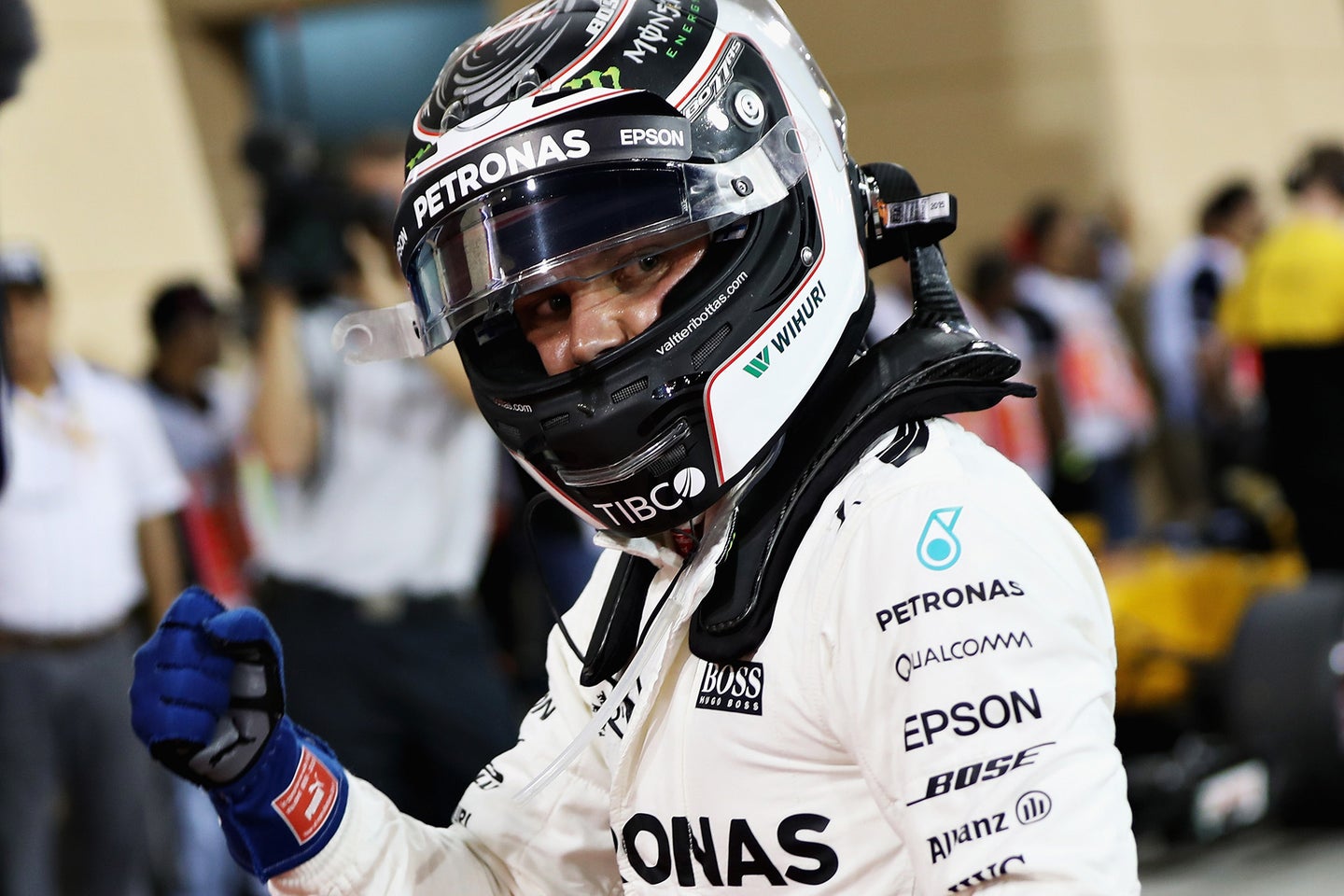 Valtteri Bottas took his first career pole position today at the Bahrain Grand Prix. Bottas was able to get the better of his teammate, Lewis Hamilton, by just 0.023 seconds. Though it was reset a few times earlier in qualifying, Bottas' pole time is now the new record for the fastest ever lap at the Bahrain International Circuit. This is also the first time Mercedes has locked out the front row in the 2017 season, relegating Vettel to third on the grid.

The drivers eliminated in Q1 were not the usual bunch. Carlos Sainz was on one helluva hot lap when his Toro Rosso stopped in the third sector of the track. At the time, he had set the quickest time of the day at in sector one, and set a personal best in sector two. This lap would have put him somewhere around 5th in Q1.

The stopped Toro Rosso of Sainz brought out a local yellow as several drivers were fighting to get out of Q1. Kevin Magnussen of Haas and Sergio Perez of Force India had to abort their hot laps, and thus were knocked out in Q1. McLaren's Stoffel Vandoorne and Sauber's Marcus Ericsson were also eliminated in Q1.

In Q2, Fernando Alonso's McLaren never turned a lap, having suffered yet another power unit failure. Pascal Wehrlein, in his first qualifying session of the year, was able to put his Sauber 13th on the grid. Lance Stroll almost advanced, but was bumped out as Roman Grosjean got his Haas out of Q2 with a solid lap.

Of the Renaults, Nico Hulkenberg ended up 5th in the session, which is massive for the rebounding team. Jolyon Palmer made Q3 for the first time of his career. This is also the first time in several seasons that Renault has put both cars in Q3.

When push came to shove in Q3, it was Bottas who came out in top. After their first runs, Hamilton had edged his teammate by just 0.092 seconds. Vettel was only able to get his Ferrari as close as 0.455 seconds behind Bottas. Making up that time was going to be a big ask of Ferrari, which it proved to be.

As the cars made their second attempts, of the top three, Bottas was the only one able to improve upon his time. He took pole with an untouchable 1:28:769. As Hamilton and Vettel could do no better, they start 2nd and 3rd. Daniel Ricciardo was able to place his Red Bull 4th on the grid, but seemed miles away as he was 0.776 seconds behind Bottas.

Ferrari's Kimi Raikkonen and Red Bull's Max Verstappen make up the third row of the grid. Hulkenberg took the 7th spot, while his teammate Palmer took 10th. Felipe Massa ended up 8th in his Williams, while Grosjean is 9th.

The start of the race will be critical tomorrow. Even though Mercedes took the front row, Ferrari's long run race pace is practically equal to that of the Silver Arrows. Red Bull's race pace is right there as well. If Bottas wants the win, he'll have to stay out front, leaving Hamilton to fend off the Ferraris and Red Bulls. Mercedes haven't had this much pressure on them for some time, nor have Ferrari been this competitive. The pieces are in place for a great Bahrain Grand Prix, which is something that doesn't happen very often.